After titillating power users at the Worldwide Developer Conference this past June with a redesigned Mac Pro (see “Apple Gets Around to a New Mac Pro,” 10 June 2013), Apple has finally announced details. The round tower of power will become available sometime in December 2013, and pricing will start at $2,999 for a model that features a 3.7 GHz quad-core Intel Xeon E5 processor, 12 GB of RAM, dual AMD FirePro D300 graphics processors — each with 2 GB of RAM — and 256 GB of PCIe flash storage. Check Apple’s site for full specs. 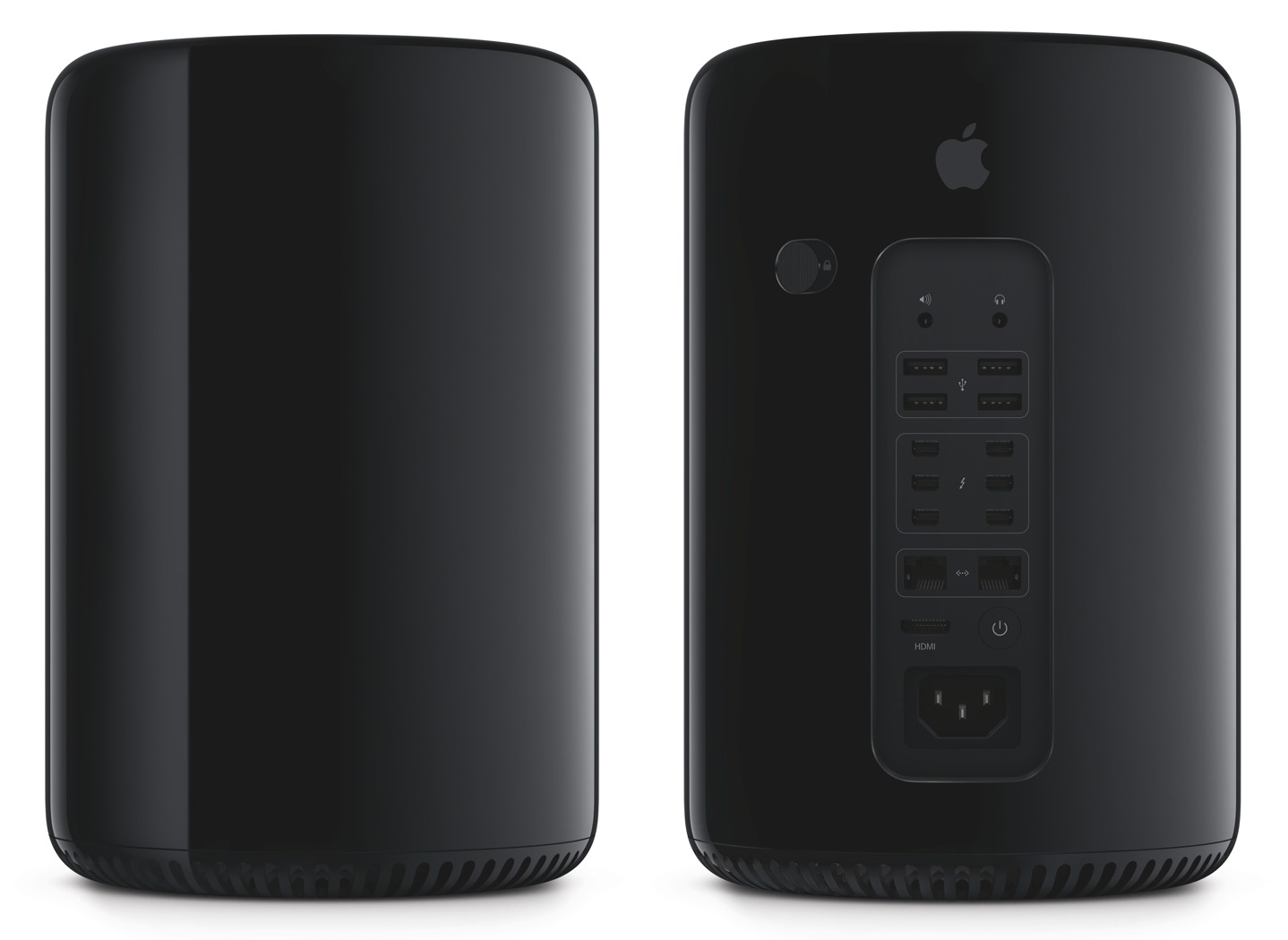 On the display side, the new Mac Pro can run up to three 4k displays (monitors with roughly 4000 pixels horizontally) or six Thunderbolt displays. Standard ports include four USB 3.0 ports, six Thunderbolt 2 ports, dual gigabit Ethernet, and HDMI 1.4 UltraHD, along with a combined optical/digital audio output/analog line out minijack and a headphone minijack with headset support. 802.11ac Wi-Fi and Bluetooth 4.0 are built in too. What you won’t find in the box with a new Mac Pro are a keyboard and a mouse.

At Apple’s special event, Apple Senior Vice President of Worldwide Marketing Phil Schiller bragged, “People have been blown away by this new design.” (He also mistakenly called Batman “The Black Knight,” leading to an awkward moment.) The Mac Pro is a stunning object — it’s a 9.9-inch tall, 6.6-inch wide (25.1 by 16.8 cm) cylinder, encased in gleaming black polished aluminum. Apple showed a video of the Mac Pro being manufactured, causing several of us to lust after the shiny chrome look that comes earlier in the process.

It’s not just pretty. While the old Mac Pro required eight fans, the new cylindrical design needs only one, and the new Mac Pro is one-eighth the volume of the previous model. At idle, it also draws only 43 watts, and drops its sound production from 30 dBA to a mere 12 dBA — making it as quiet as the Mac mini. By comparison, a pin drop typically sounds off at 10 dBA.

A promotional video showed creative professionals enthusing about the new Mac Pro. Grammy-award-winning producer Stuart Price said, “The new Mac Pro is blazing fast and shockingly quiet. You have to not hear it to believe it. This is the perfect computer for the recording studio.” Hollywood filmmaker Dean Devlin said of it, “The Mac Pro makes real-time 4k editing a reality. It’s more powerful than I ever imagined and will change the way I make movies.”

That’s an indication of who Apple thinks will be buying the new Mac Pro — creative professionals who are processing video, mixing audio, or pushing pixels in a big way. But the price will send many long-time Mac Pro users straight into the arms of the iMac, which has excellent performance and supports multiple monitors for a lot less money. That’s not a bad thing, just an indication that the new Mac Pro is really aimed at those who need the ultimate in performance.

Comments About Details Emerge about the New Mac Pro