When the actual White House blog calls out a fictional character — White House Communications Director Toby Ziegler of “The West Wing” TV show — on Twitter to commemorate a change in FAA policy, it’s worth paying attention. The tweet:

And the reference? A quote from the 1999 TV show, when Toby Ziegler responds sarcastically to being asked to turn off his cell phone on a plane:

We’re flying in a Lockheed Eagle series L1011. It came off the line 20 months ago. It carries a Sim-5 Transponder tracking system. Are you telling me I can still flummox this thing with something I bought at Radio Shack?

And the news release that prompted this media geekery? The U.S. Federal Aviation Administration has announced that it is following the advice of the 28-member panel that recommended changes in policy regarding the use of electronics in flight (see “FAA Panel Recommends Easing Restrictions on Electronics in Flight,” 3 October 2013), something we started tracking last year with pilot Steve McCabe’s article, “Why Do Airlines Require Us to Turn Off Our Gadgets?” (5 October 2012).

FAA Administrator Michael Huerta said that “the FAA has determined that airlines can safely expand passenger use of Portable Electronic Devices (PEDs) during all phases of flight, and is immediately providing the airlines with implementation guidance.”

Actual implementation will vary by airline due to differences in the specific airplanes involved, but the FAA expects that many carriers will verify that their planes can tolerate radio interface from personal electronic devices and allow their use — in airplane mode! — from gate to gate by the end of 2013.

There are a few additional caveats besides the need to put devices in airplane mode. Most important, be sure to comply with existing rules for now — this rule change takes effect only once planes have been certified. As always, follow the directions of the flight crew — especially if they’re giving them in full song and dance. Even after the new rules come into effect, the pilot may require that all electronics be turned off during low-visibility landings. And while it will be acceptable to hold tablets and smaller devices during takeoff and landing, larger electronic devices like laptops will still need to be
stowed during that time, to avoid interfering with emergency evacuations.

Lastly, as noted previously, these forthcoming changes do not in any way affect the ban on use of mobile phones in flight. Those rules come from the Federal Communications Commission, not the FAA, and are aimed at preventing network confusion when in-flight phones light up multiple cell towers on the ground (see “Peering Inside a Mobile Phone Network,” 6 October 2008).

(As an aside, I clearly have too much real work to do, such that I hadn’t realized that many of the West Wing characters have chatty fan-run Twitter accounts that stay, well, in character. Must not follow…) 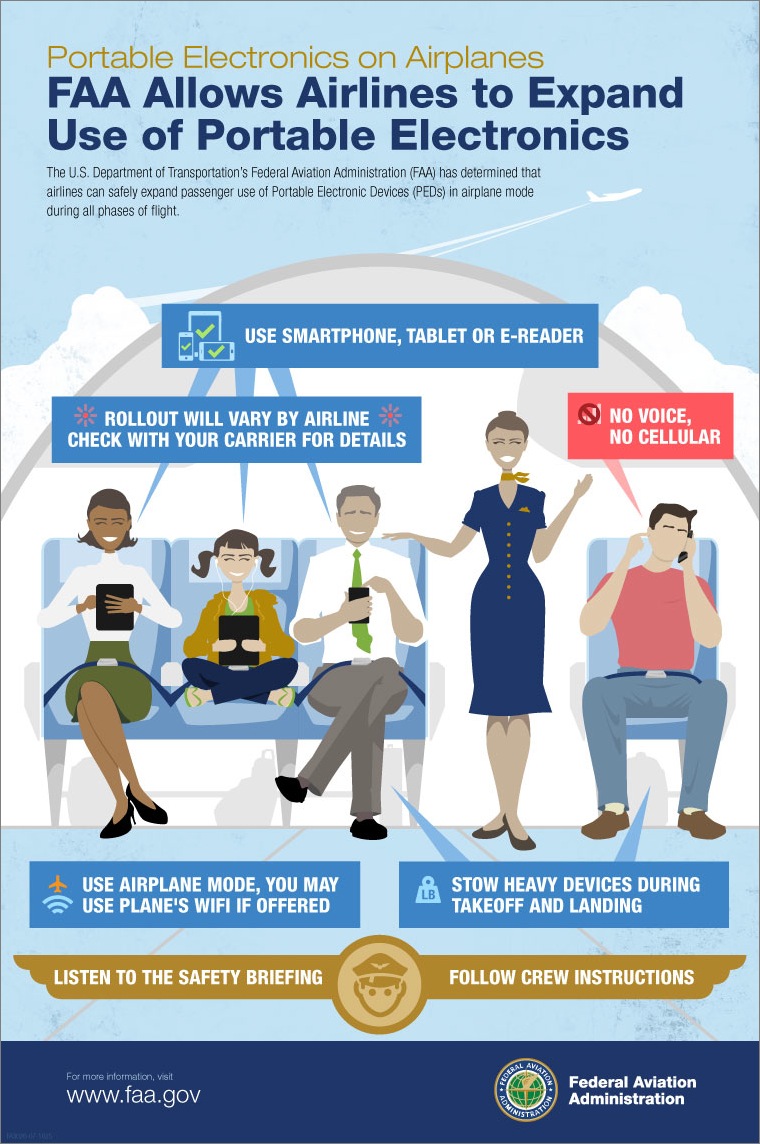 Comments About FAA to Expand In-flight Electronic Device Use