Napkin 1.1.1 — Aged and Distilled has released Napkin 1.1.1 with stability and cosmetic updates related to OS X 10.9 Mavericks (see “Napkin Offers a Fresh Take on Visual Communication,” 16 February 2013). The image annotation and diagramming app fixes crashes related to opening documents with multiple imported images, dismissing the iCloud sharing dialog, and returning from redaction mode to a canvas with an arrow item. It also fixes a problem where an image item would draw the wrong content and bugs that inappropriately displayed an inverted canvas. ($39.99 new from
the Mac App Store, free update, 8.8 MB, release notes)

1Password 4.0.5 — AgileBits has released 1Password 4.0.5 with a couple of tweaks to make it easier to upgrade from 1Password 3, as well as a variety of other improvements and fixes. The update to the password management utility enhances clipboard interoperability with Carbon apps (such as BBEdit), sorts items within folders in 1Password mini, displays a message if 1Password is locked and attempting to quit with unsaved changes, fixes a problem with importing data from LastPass, and squashes a bug with folder syncing in Wi-Fi sync. The Mac App Store version also fixes an issue where Dropbox might not be detected
immediately and a problem where changes in the master password did not sync to Dropbox. ($49.99 new from AgileBits and the Mac App Store, free update for those with a 1Password 4 license, 36.7 MB, release notes)

PDFpen and PDFpenPro 6.1 — With the release of version 6.1 of PDFpen and PDFpenPro, you can put away your ink pad for good… at least when it comes to PDF-based business documents. The latest update to Smile’s all-purpose PDF editing apps adds a library of standard business stamps such as Confidential, Sign Here, and Approved, and it offers the capability to add your own stamps to the library. You can find the new range of stamps by choosing Window > Library (Command-Y) and clicking the stamp icon in the Library palette. 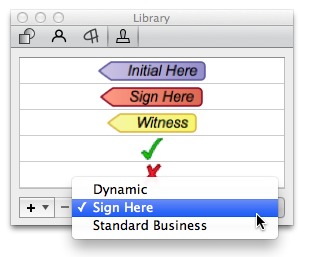 Both updates also bring the capability to add pop-up notes to PDF annotations such as highlighting and drawing objects, add support for saving PDFs to Evernote Business notebooks, and enable the opening of PDF documents with missing or incorrect extensions. PDFpenPro 6.1 now lets you create form fields for an entire PDF document (in addition to per page), and adds a command to detect and create links from URLs automatically, as well as an option to display source URLs on pages when creating a PDF from a Web site.
($59.95/$99.95 new with a 20 percent discount for TidBITS members, free update from version 6.0, 51.5/52.3 MB)

Read/post comments about PDFpen and PDFpenPro 6.1.

Parallels Desktop 9.0.23140 — Parallels Desktop has been updated to version 9.0.23136 to improve support for the new multiple display functionality in OS X 10.9 Mavericks, enhance support for Finder tags, and provide OS X notifications when new email is received by Microsoft Outlook 2007 or later. The release squashes a bug that prevented external storage devices from reconnecting after either restarting or resuming a virtual machine or unplugging a device or media. It also provides enhanced battery life for MacBooks running Parallels Desktop 9, puts an end to annoying “device connect/device disconnect” sounds
when resizing a window, and resolves an issue with dragging and dropping files from Linux to Mac OS X when running in Coherence. A quick update to 9.0.23140 resolves several crashing bugs in Mavericks. ($79.99 new, $49.99 upgrade, $39.99 educational, 356 MB, release notes)