So you just dropped $499 or more on a new iPad Air, or maybe you’re looking to buy a new iPad mini later this month. (Can’t decide between the two? Check out “Is the iPad Air Right for You?,” 6 November 2013.) But who wants to buy a new, expensive device without something to demo? No one ever says, “Hey, I got a new iPad, check out these sweet PDFs!” The gold standard for demonstrating the power of Apple’s mobile devices has long been the Infinity Blade series, and Infinity Blade III ($6.99 in the App Store),
first announced at this year’s iPhone event, carries on the tradition. The trailer gives you a taste of just how far the game pushes the limits of iOS.

If you’re new to the Infinity Blade series, here’s the story: you play a big dude in armor who moves from fighting one giant monster to the next, defeating each in one-on-one combat until you challenge some quasi-immortal armored guy, whom you must beat to win the game. This time around, you can also play as a lady in armor, who is equally adept at smacking around big bads.

OK, there’s more to it than that. Much more. But, it’s not terribly important, and more to the point, by now the story is a convoluted mix of fantasy and post-apocalyptic sci-fi that requires you to play the two previous games and read a couple of novellas to understand. If you’re that curious about the story, some helpful folks on YouTube have compiled a one-minute summary.

Fortunately, the story doesn’t matter because the game is all about graphics and gameplay. In Infinity Blade III, you walk a mostly fixed path, from one foe to the next, picking up items along the way. Unlike many games, there are no small monsters to slay, or “trash mobs” as World of Warcraft players might call them. Everything’s bigger in the world of Infinity Blade. 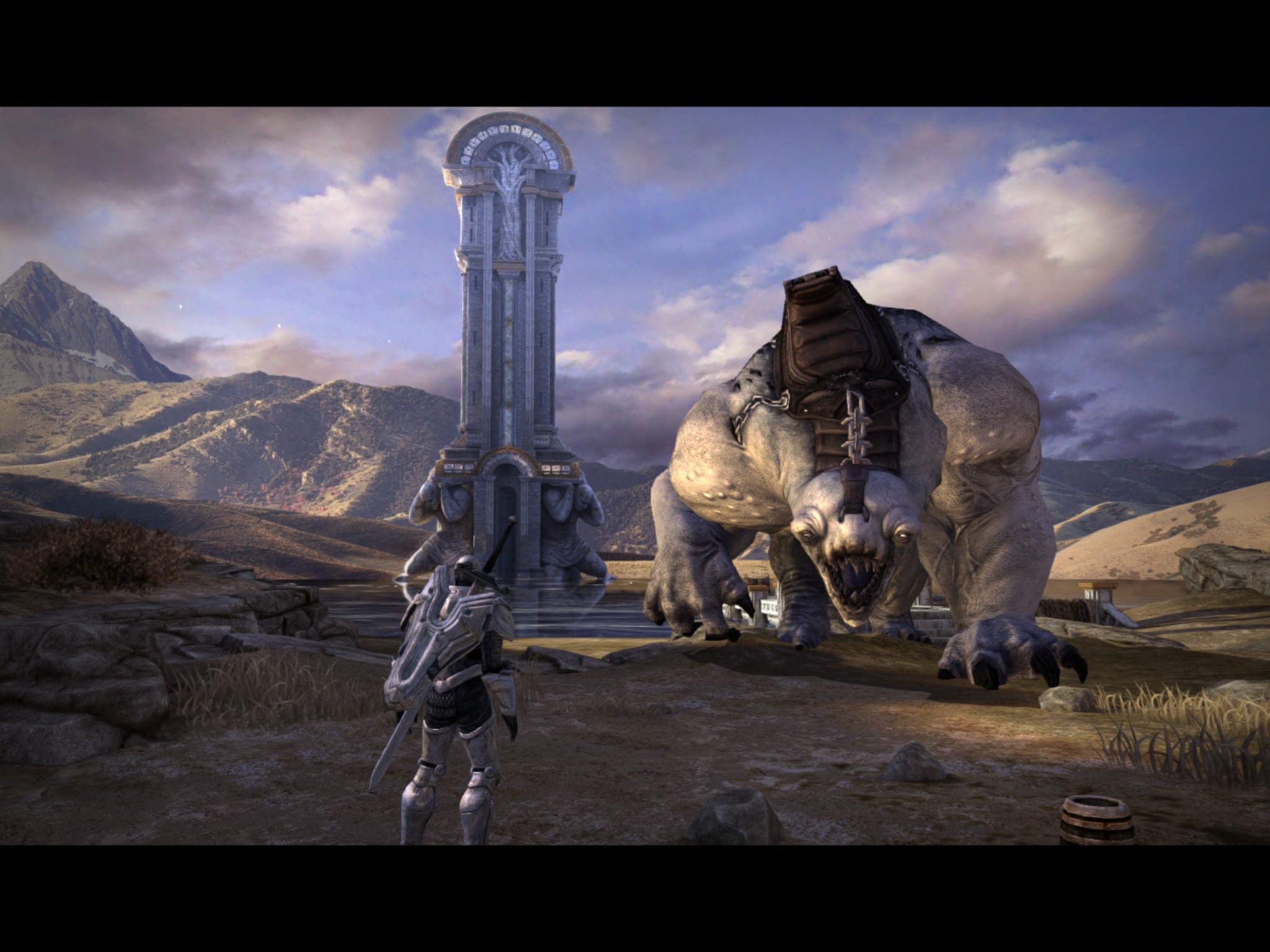 Once you reach a baddie, you engage in a one-on-one duel that requires carefully timed touch gestures. Since everything you fight is much bigger than you, the idea is to dodge, parry, or block your enemies’ attacks until they’re tired and vulnerable, then beat the snot out of them until they leap back into action. The more effectively you counter, the more damage you can do. Lather, rinse, repeat. 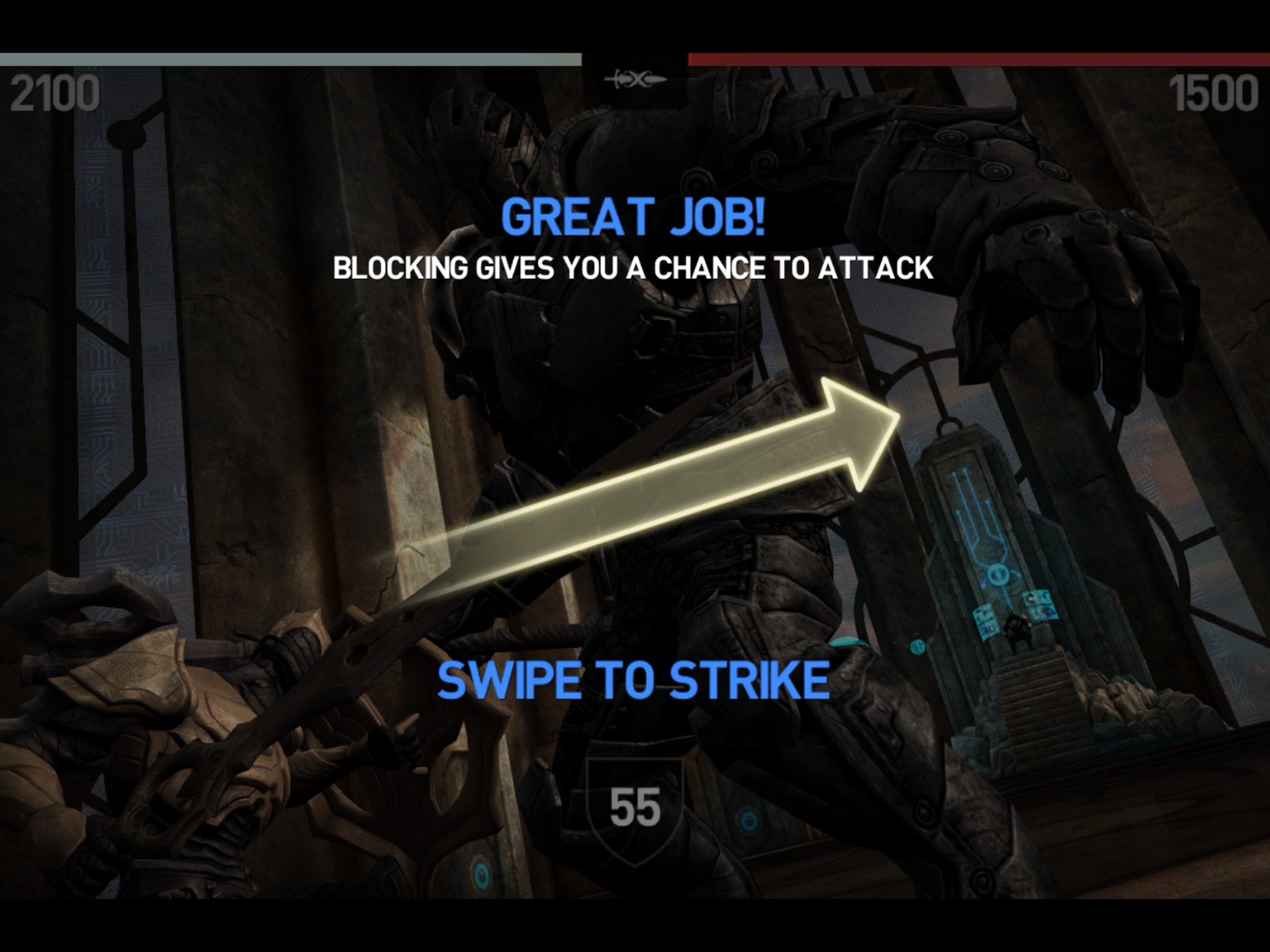 In fact, one could say that lather, rinse, repeat, is the core mechanic of Infinity Blade. You’re going to die. A lot. If you die when fighting a “regular” monster, you get to try again, but if you die against a boss, you have to start over from square one.

But don’t worry, that’s the idea. As you defeat baddies, you garner power levels and new items that make the fights easier. You also earn skill points with your weapons, so you get better at using them. You keep these as you die and are “awakened” to fight once more. Chances are, the first fight will be rough, but as you keep revisiting it, you’ll eventually blow right through it. 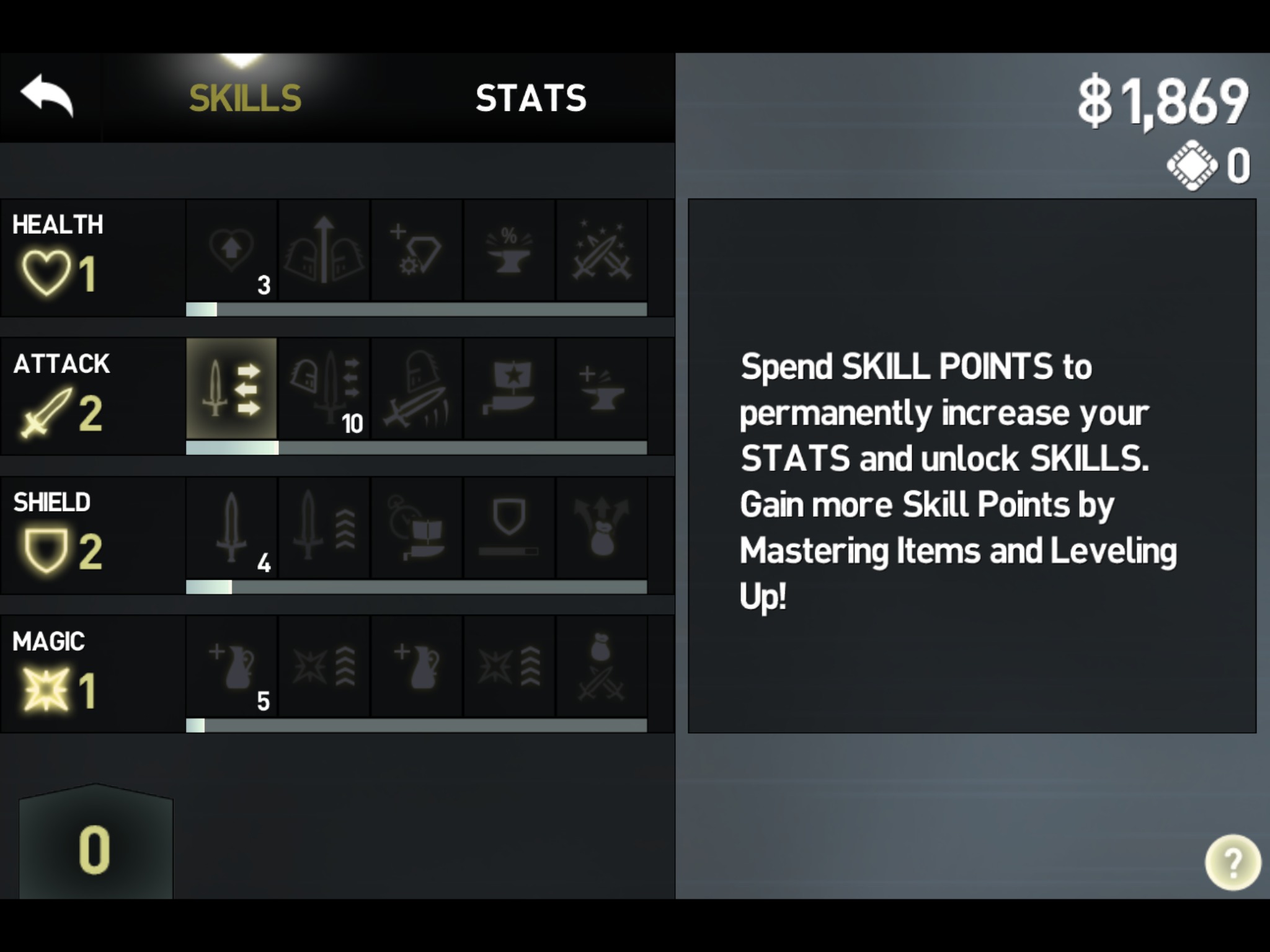 If you’re a veteran gamer, you might think that this game sounds an awful lot like Nintendo’s Punch-Out!!, mixed with Diablo and a smattering of Shadow of the Colossus. You would be right, and if you’re a fan of Nintendo’s classic boxing franchise, you’ll love the gameplay of Infinity Blade III.

For those familiar with Infinity Blade, the third installment greatly expands the game. While the first two chapters were confined to just one area, Infinity Blade III has a whopping eight areas. In addition to that, you can now craft potions and new weapons. While the first two titles felt like glorified tech demos, the third is a full-blown adventure. But that comes at a cost — 1.56 GB of storage space. 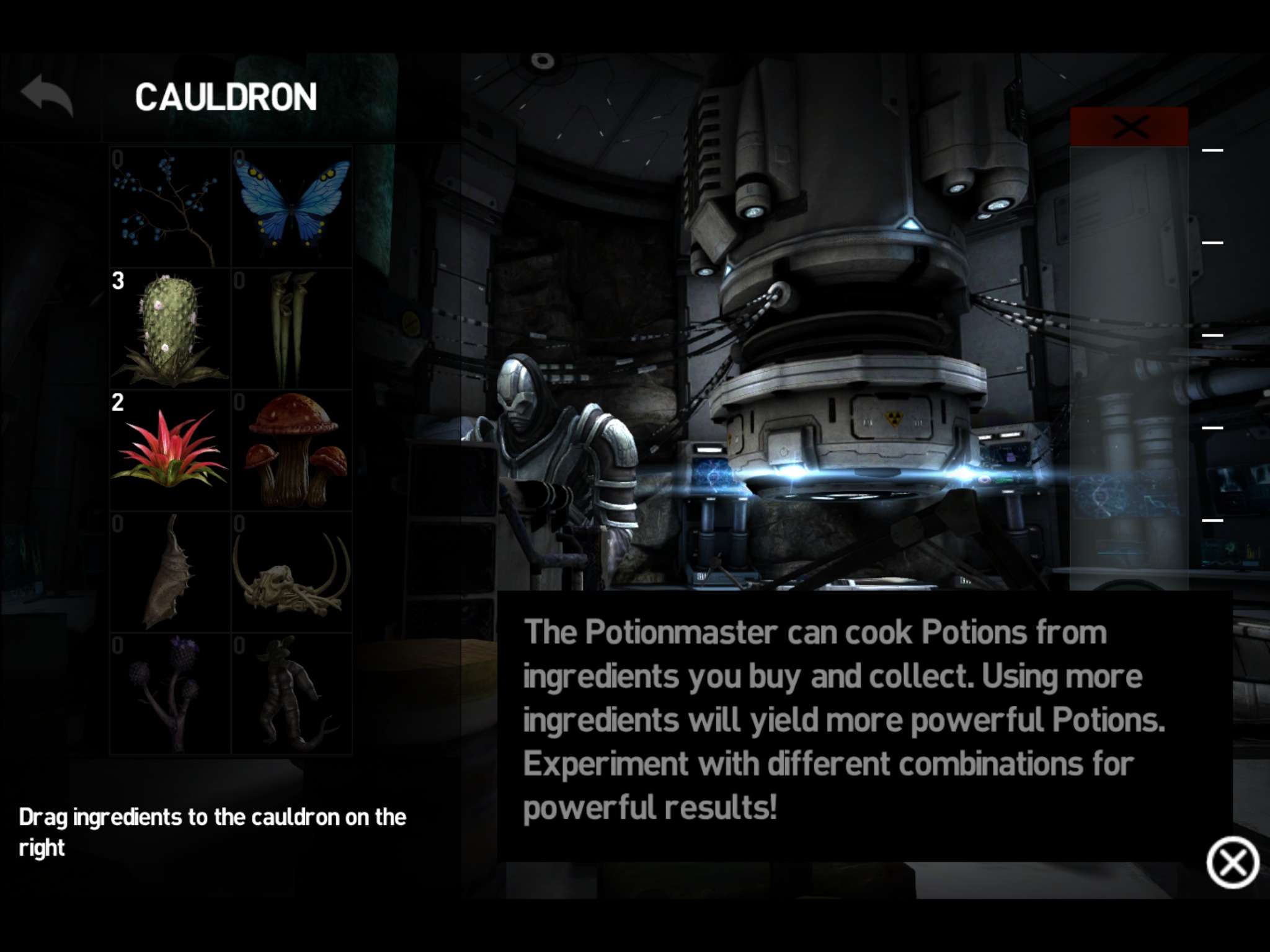 However, for those who have already played the first two titles in the series, there may not be enough on offer to bring you back. Yes, there is much more content, but the gameplay is identical to the first two games. If you’re burnt out on those, Infinity Blade III is skippable.

A side effect of greatly expanding the Infinity Blade franchise is that the third game wants to nickel-and-dime you for everything. You’ve always been able to purchase in-game currency, but now there’s a second form of currency — battle chips — that you amass through completing goals and challenges, and, of course, in-app purchases. In the previous games, you still gained experience points for new levels even after mastering your weapons. In this installment, you stop gaining experience points when your weapons do, so you feel constant pressure to buy new ones. If that weren’t bad enough, there’s a new merchant character that appears every now and again
with rare items that you must buy immediately, or else they disappear forever. I feel like the game is constantly screaming, “BUY! BUY NOW! BUY MORE! GIVE US MONEY! BUY, BUY, BUY!”

Ugh. Look, guys, if you need more than $6.99 for Infinity Blade III, just charge more. Don’t undercharge for a $20 game and then constantly hound me to pay you more. Unfortunately, it looks like the paid app, as Instapaper creator Marco Arment has claimed, is a dying breed, so things like this will only get worse with time.

That major annoyance aside, Infinity Blade III is a fantastic demonstration of the power of the A7 chip inside Apple’s new iPhones and iPads. The graphics are as good as anything you’ll find in the outgoing generation of consoles. Better, in some ways, since they’ve been optimized for Apple’s high-resolution Retina displays. Meanwhile, even some games for the new Xbox One and Playstation 4 consoles will display at a relatively blurry 720p resolution.

I’ve only scratched the surface of the game’s content, but in extended play sessions, I never noticed any lag or noticeable heat from my iPad Air. While I’m too busy writing “Take Control of Your Apple TV,” (to learn how you can read it now, see “‘Take Control of Apple TV’ Streaming in TidBITS,” 4 November 2013) to delve into the smash hit Grand Theft Auto V, I can see myself playing my way through Infinity Blade III in some stolen moments (clearly I must test how Infinity Blade III works via AirPlay to the Apple TV!). It’s just the sort of game I like: lots of content that can be played in short bursts.

If you’re new to the series, Infinity Blade III is a good place to start, and a great way to show your friends and family just what your new iPad can do. If you’re an Infinity Blade veteran, then this third act could be a yawner, but may be worth it for the visual effects alone.