It’s almost a trope that online communications will be the death of the conference. Why spend hundreds, if not thousands, of dollars to fly about the world and stay in an expensive hotel when you could instead interact with colleagues via email, instant messaging, or the social media craze du jour? Don’t get me wrong — there’s a place for all that digital flitting about, and I certainly do my share.

But a role remains for the traditional conference, and while some muddle along with the never-quite-comfortable rows of chairs, earnest speakers, and inevitable salmon-and-rice dinner, MacTech Conference transcends the genre.

What sets MacTech apart is its attention to detail, from the double-sided name tags that never obscure your identity and obsessive focus on making the Wi-Fi network fly, to a relationship with the hotel that results in executive functionaries overseeing meal service personally. Sponsors are given constant exposure and appreciation without pandering, the conference organizers circulate among and chat with attendees at all times, and the whole thing gathers an air of summer camp by the end.

Leaving is a little hard. You feel like you need to say goodbye to too many people — the guy who brings a stuffed rhino with him on all trips so he can send home pictures of it to his family, the woman who does IT support for Disney and has a custom Alice in Wonderland desktop, the man you met at breakfast one day who happens to work with an old college friend of yours, and so on. And often, that final conversation closes with a jaunty, “See you next year!”

It shouldn’t be surprising. Yes, MacTech has numerous sessions for Apple-oriented developers and IT professionals, mostly given by members of the community. A few presentations were a little rough, since the conference prides itself on bringing new voices to the stage, but the information conveyed was generally high quality and useful. There were also thoughtful opening and closing sessions, by Ars Technica editor Jacqui Cheng and the inimitable Andy Ihnatko.

But the real value of MacTech lies in the informal networking, which Neil Ticktin and the MacTech staff support by feeding the attendees repeatedly (14 meals in all) to encourage mealtime mingling and by scheduling numerous breaks at which people discuss the session they just left, or segue from it to another topic. For me and Tonya, the conference was worthwhile just for the unexpected time we ended up spending with representatives from eSellerate, the Digital River subsidiary that handles our Take Control shopping cart.

The networking aspects certainly help bring people together, but what cements those bonds are MacTech’s special events. This year brought a day of test drives of the Tesla Model S that were so popular that when my turn rolled around, I had a full back seat with Tonya, Andy Ihnatko, and our eSellerate buddy Jon Tewes. Speaking as an expert product reviewer, I recommend you buy one immediately, assuming you have between $60,000 and $120,000 burning a hole in your pocket. 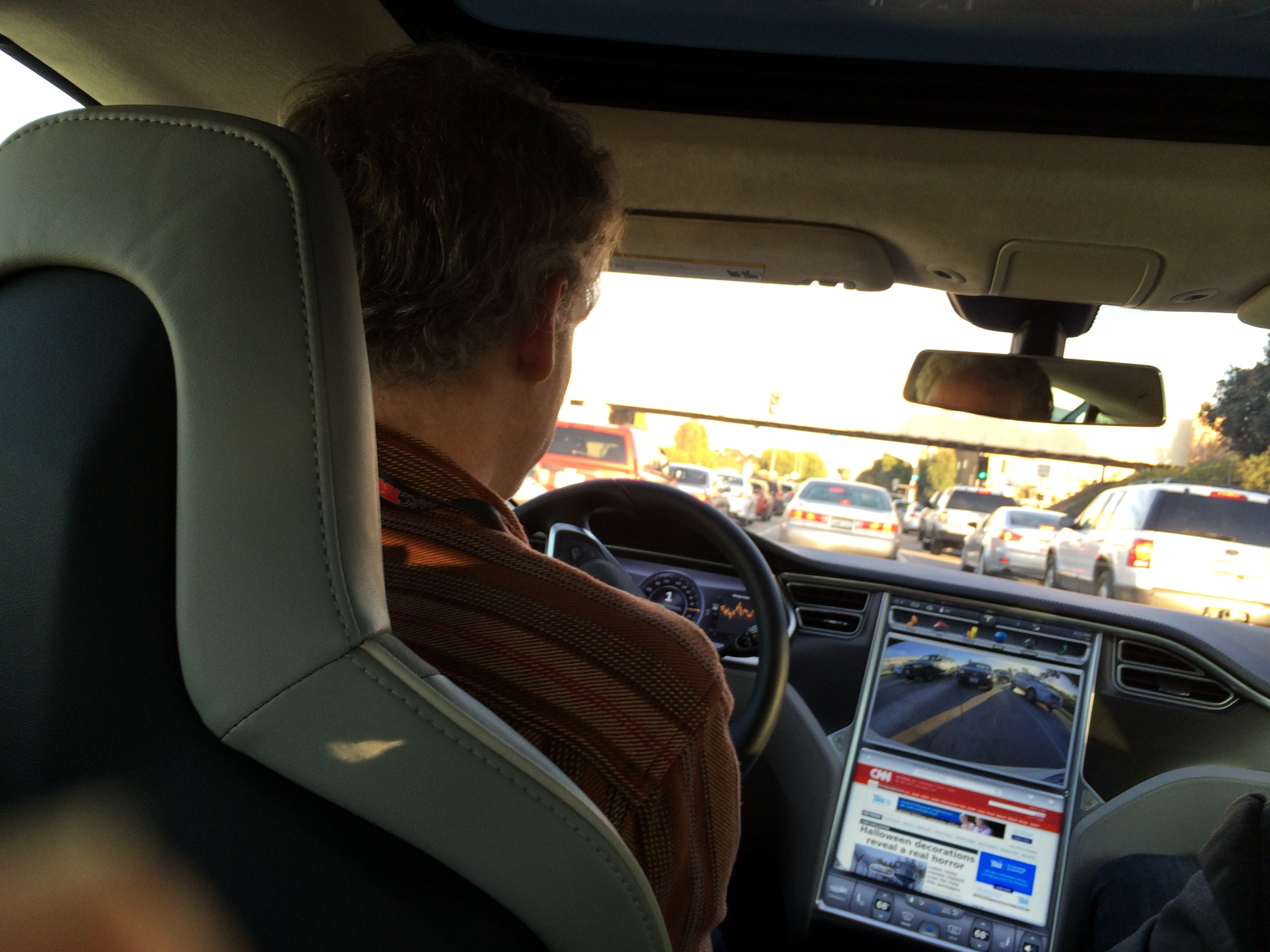 Then there was the gleeful geeking out over the actual bridge from the Enterprise-D from “Star Trek: The Next Generation.” Lovingly restored by the non-profit organization New Starship, it’s huge fun, and the first step in what the group hopes will culminate in the Hollywood Science Fiction Museum, where the bridge will be outfitted with live touch screens so kids can play at Star Trek while learning about
science and engineering. It’s a worthy cause, and the organization’s founder, who was far from being a Mac geek, was overwhelmed by the level of interest. 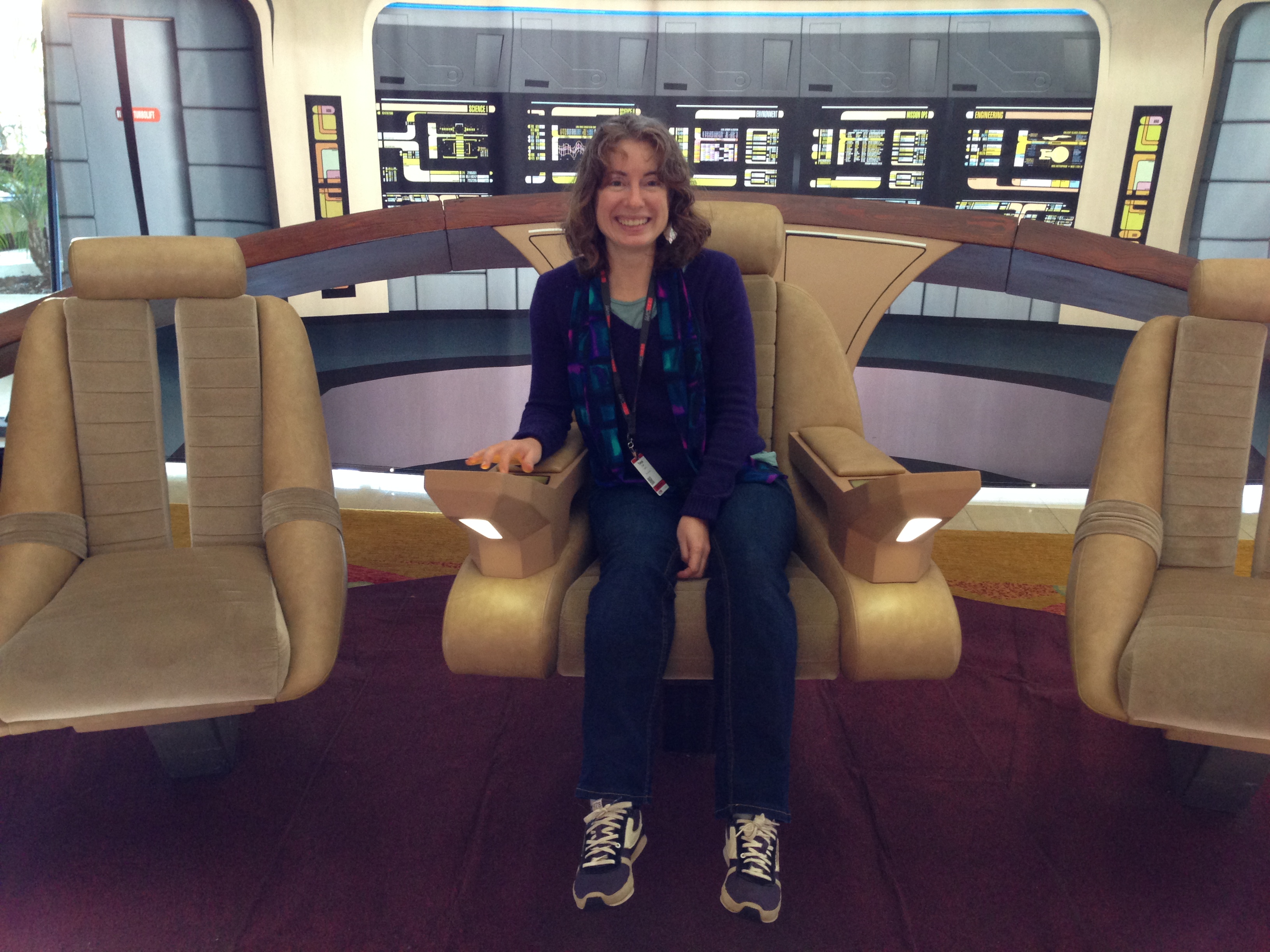 In a jump from the fictional to the real, the first evening event was a reception underneath the surprisingly large Space Shuttle Endeavour, housed at the California Science Center. With conversations bolstered by docents who had worked on the engines, visiting scientists from Jet Propulsion Laboratory who talked about their projects, and a rover from Wolfgang Fink of the University of Arizona’s
Visual and Autonomous Exploration Systems Research Laboratory, it was an evening the numerous space geeks among the attendees will likely never forget. The second evening’s event wasn’t so geeky — a night of In-n-Out burgers, go cart racing, batting cages, rock wall climbing, miniature golf, and laser tag — but still vastly more fun than an awkward industry party with drinks and finger food. 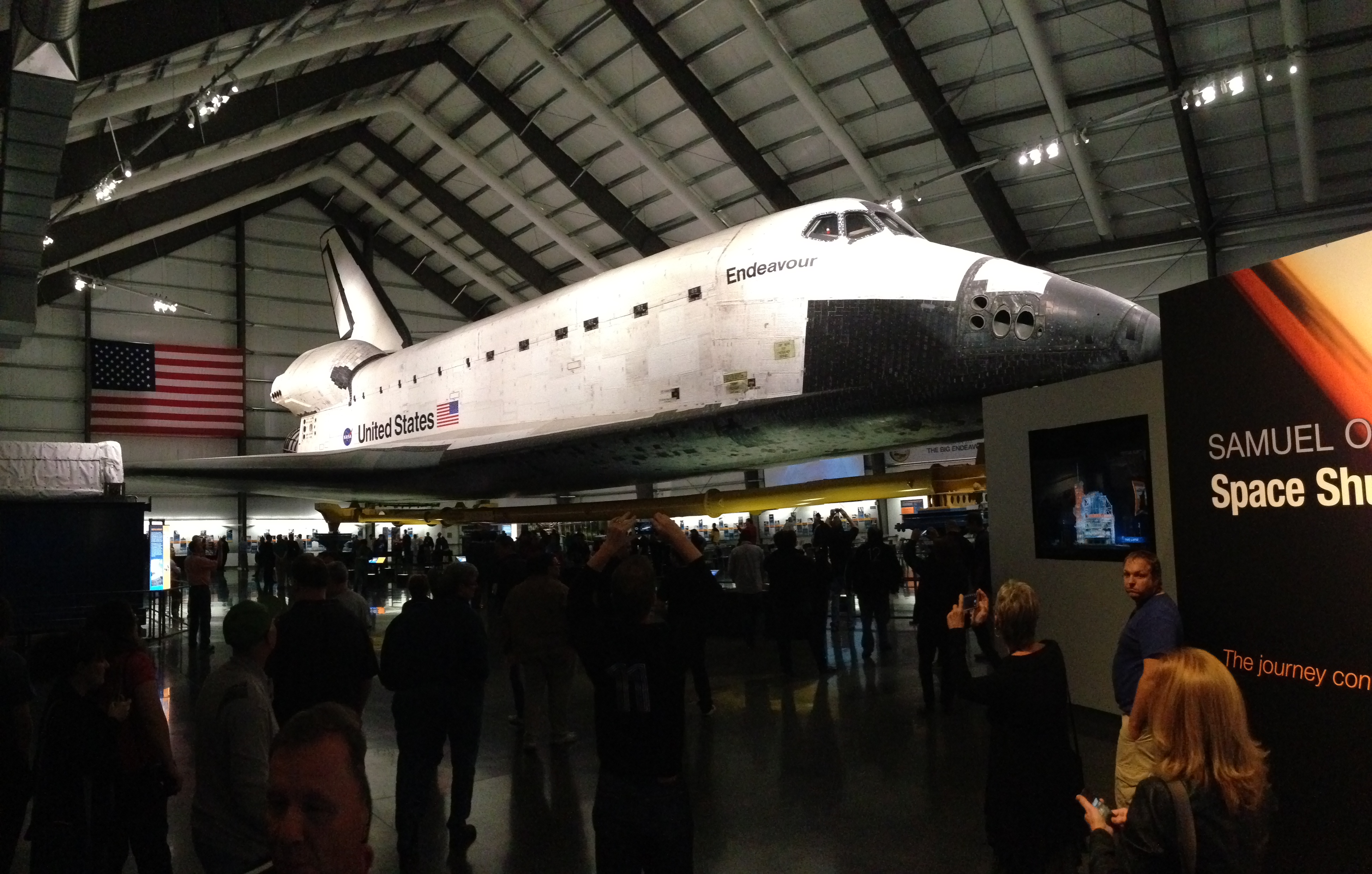 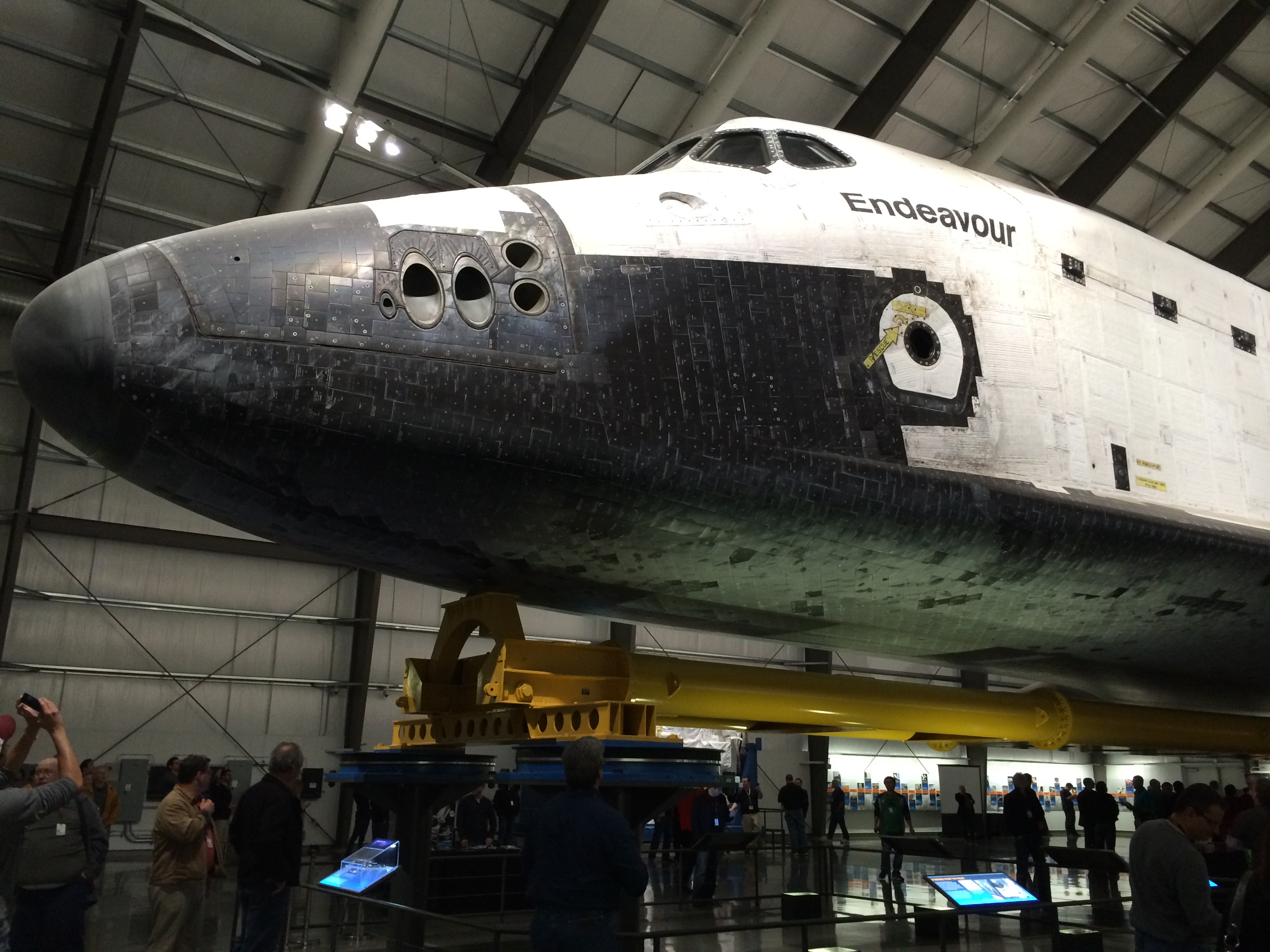 We were happy to contribute to the entertainment as well. To celebrate Take Control’s tenth anniversary in the flesh (see “Celebrating Ten Years of Take Control,” 28 October 2013), Tonya and I put together the Take Control Tech Up, a quiz show event for the 350 attendees.
Wonderfully emceed by Andy Ihnatko, we challenged the attendees with a set of difficult trivia questions pulled from our 23+ years of experience covering Apple for TidBITS and amassing a catalog of over 125 ebooks.

We started with a selection round, where everyone stood up and raised red or blue cards to answer A/B-type questions; those who answered wrong had to sit down. After five or ten of those questions, we had winnowed it down to nine contestants who came up on stage for an elimination round, where they had to come up with the correct answers — no A/B or multiple choice! — to another 50 questions.

When one contestant answered wrong, the next person was given a chance, on down the line, and if no one got the answer right, we opened it up to shouts from the audience. A correct answer, or a wrong one that elicited enough laughs from the audience, garnered a point, and at the end of 50 questions, we awarded the seven lowest scorers full access to all Take Control titles, leaving freelance coder Gwynne Raskind and Mac consultant Allister Banks on stage for the final prize round — Gwynne had dominated the elimination round with correct answers while Allister supplemented his right answers with a number of laugh points.

They then went head-to-head with another 11 questions in the same format, competing for the somewhat absurd choice between a scrumptious lemon Bundt cake and a new iPad mini, both also packaged with the entire Take Control library. Gwynne continued her streak of correct answers and didn’t hesitate to pick the iPad as her prize, leaving Allister with the cake to eat while he read from his Take Control library.

Timing was our main worry going in: did we have enough questions, would the audience stay engaged the entire time, and so on. Overall, it went extremely well, though if we were to do it again — perhaps next year at MacTech — we’d start the selection round with easier questions that get progressively harder; our selection questions knocked out a lot of people a bit too quickly. In the end, the event lasted about an hour, and could have been shortened with fewer questions in the elimination round. If anyone is interested in replicating the Tech Up for another event and has questions, I’m happy to answer them.

I’m also researching interesting ways to put our questions online for everyone to test their Apple knowledge against (no turning to Google for help!). If you know of a particularly good quiz site, let me know.

Comments About MacTech Conference 2013 Abounds with Networking and Fun