Keeping track of receipts is an infuriating task in the digital age. Whether you track them for reimbursement by your employer or to better watch your personal finances, managing a flurry of small receipts is a headache. Nobody wants to sort through a filing cabinet filled with little bits of paper or trudge through the data entry necessary to generate an expense report.

Fortunately, I’m not the only person with a vendetta against physical receipts. Gareth du Plooy, the man behind Brilliant-ish Software, has created Receiptmate for iPhone, a $2.99 app to scan your receipts, tally up their totals, and store them digitally in the snippet-keeping service Evernote. Using Evernote for storage rather than a custom service is sensible — having all my receipts accessible from any device with the Evernote app is an appealing proposition — plus Evernote is tried and tested for PDF storage. You will need an Evernote account
to use Receiptmate. 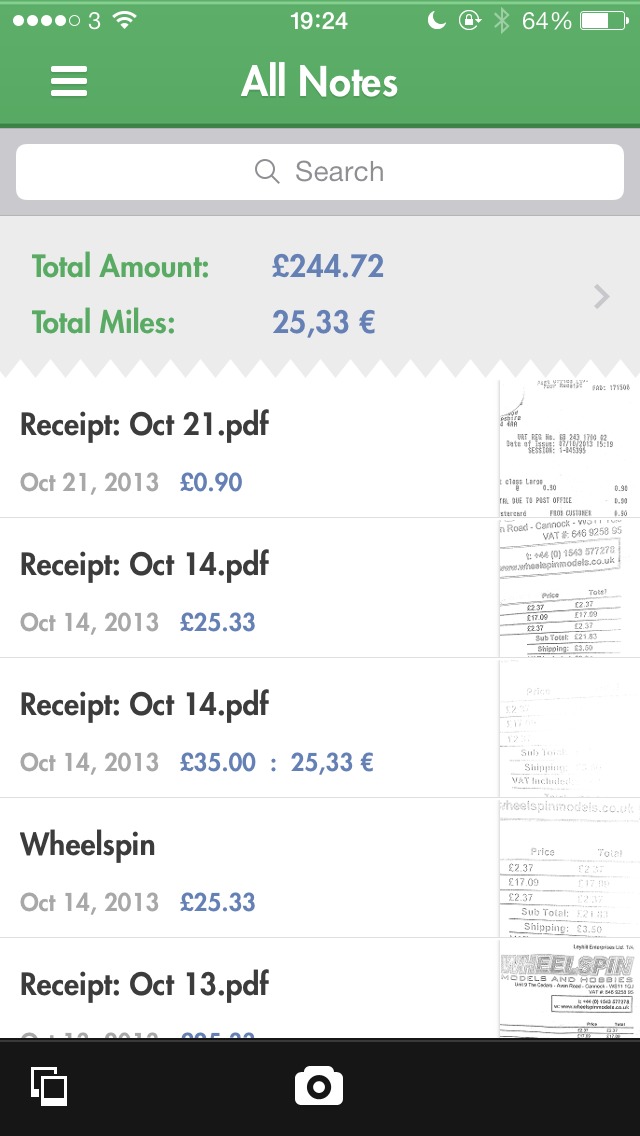 Receiptmate is flexible, allowing you to add receipts at any time. Prefer to snap pictures of your receipts throughout the day and add them to the app in the evening? No problem, as it can import images from your iPhone’s Camera Roll. Would you rather add each receipt as you receive it? Receiptmate works well in that case too, since the interface allows quick entry. Here’s the basic process.

Entering Receipts and Amounts — Receiptmate uses your iPhone’s camera to scan receipts: it’s just one tap away from the app’s main screen, letting you quickly snap a picture of a receipt or import an existing image. Next, crop the receipt’s image, removing cruft around the edges. Receiptmate automatically adjusts brightness and contrast, preparing the image for you to highlight the total. 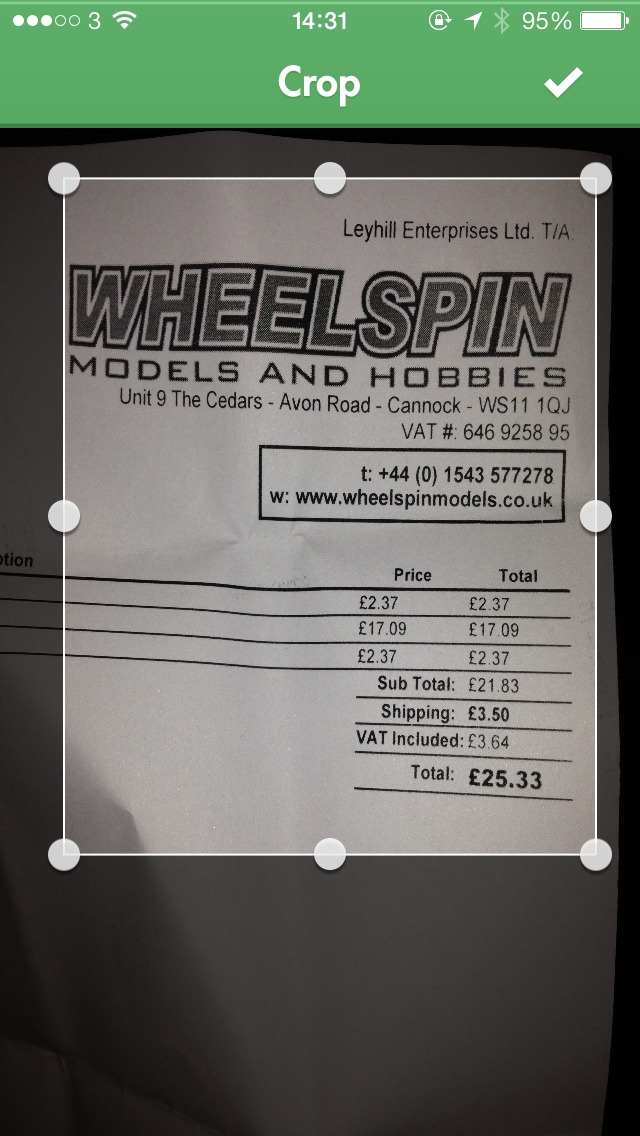 The main reason to keep receipts is to track spending amounts, so the next step is enter the amount of your scanned receipt. Receiptmate prompts you to highlight the total with a finger, after which the built-in text-recognition engine takes its best guess at the amount. I’ve had mixed results with this feature, but corrections are easy: just tap out the amount — no need to delete the bad guess. 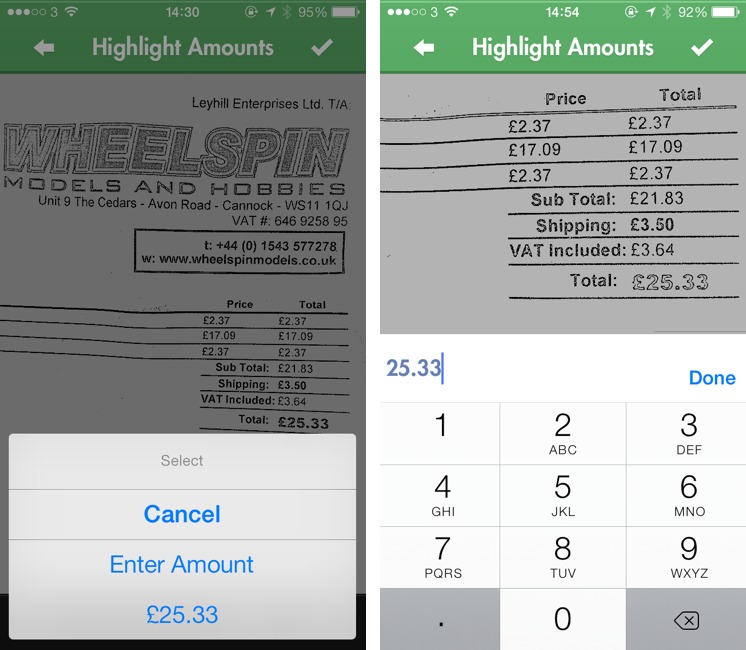 Finally, you can add additional pages to the receipt — a feature I have yet to need. Each page you add follows the same process described above. Once you’re satisfied with the end result, enter a title and any notes you may have, and you’re done. 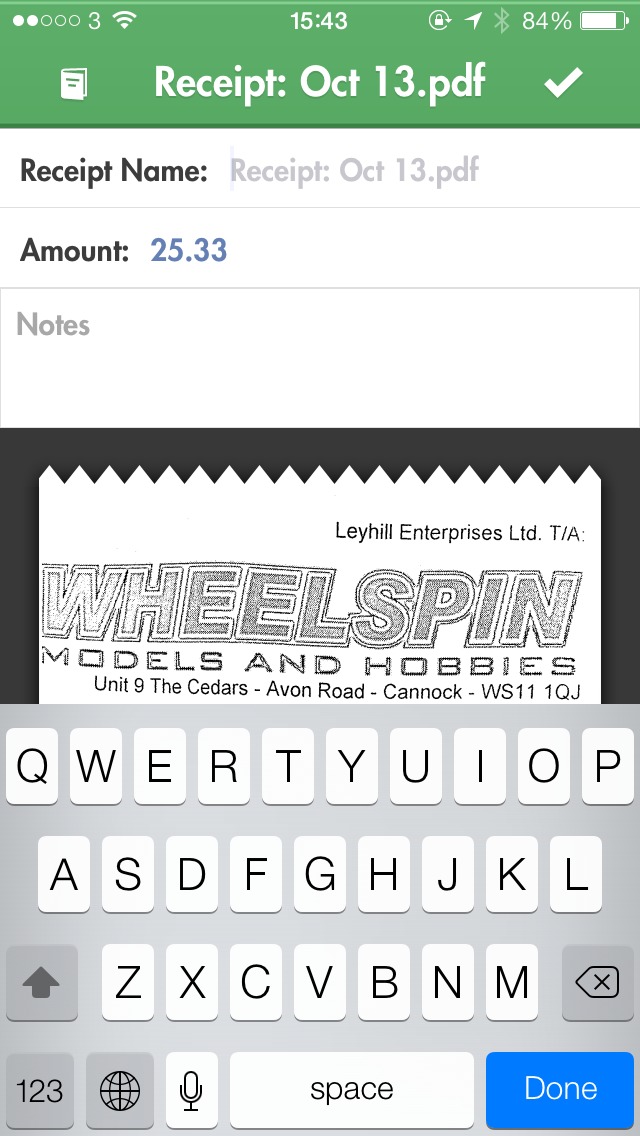 The finished receipt uploads to Evernote in the background. I made a new notebook in Evernote called Receipts and directed all my Receiptmate uploads there to keep them separate from the rest of my notes. 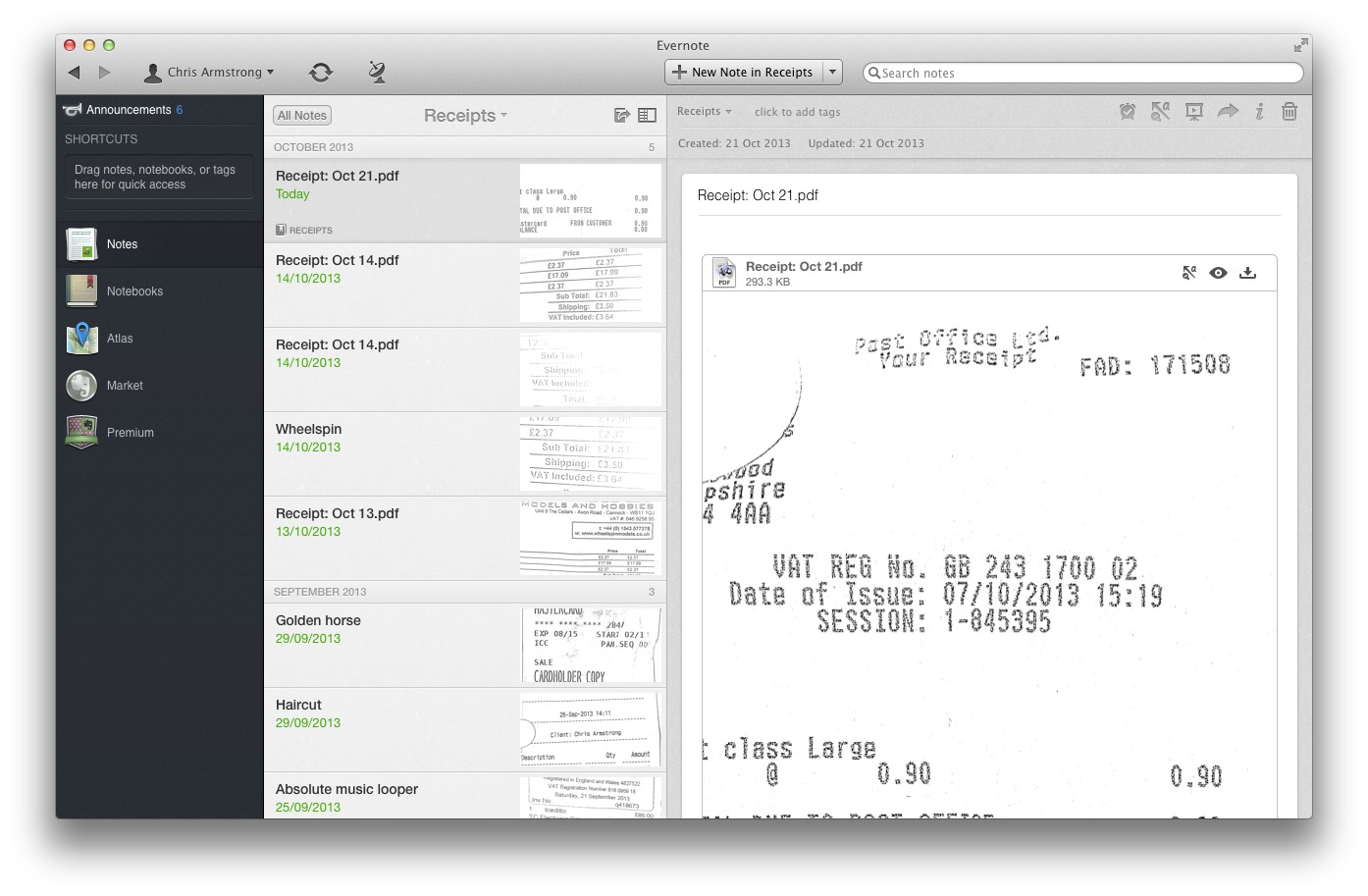 Once you have sufficient data within Receiptmate, it’s easy to generate a spending report right within the app, which you can then export as either a PDF or an Excel spreadsheet. 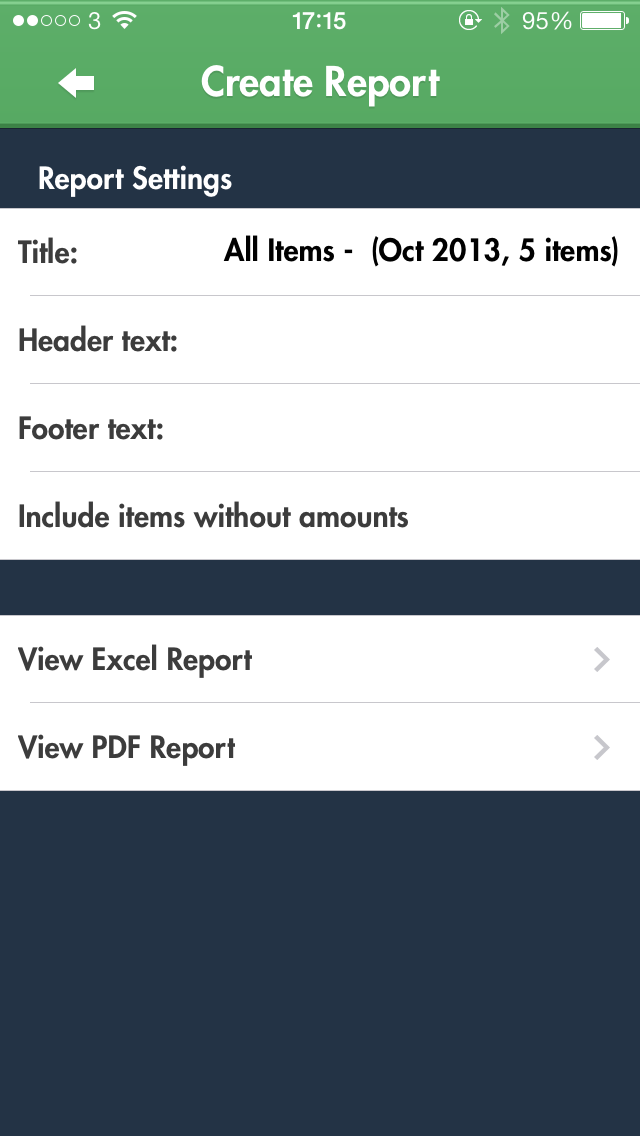 Receiptmate’s settings menu contains options to change the active Evernote account, choose the default Evernote notebook to save receipts to, enable or disable tags, turn on the saving of location information to your receipts and — one of my favourite features — support for custom input fields. These fields use the same text recognition as the amount calculator described earlier, but they can be named anything you wish and be given units varying from currencies to distances. 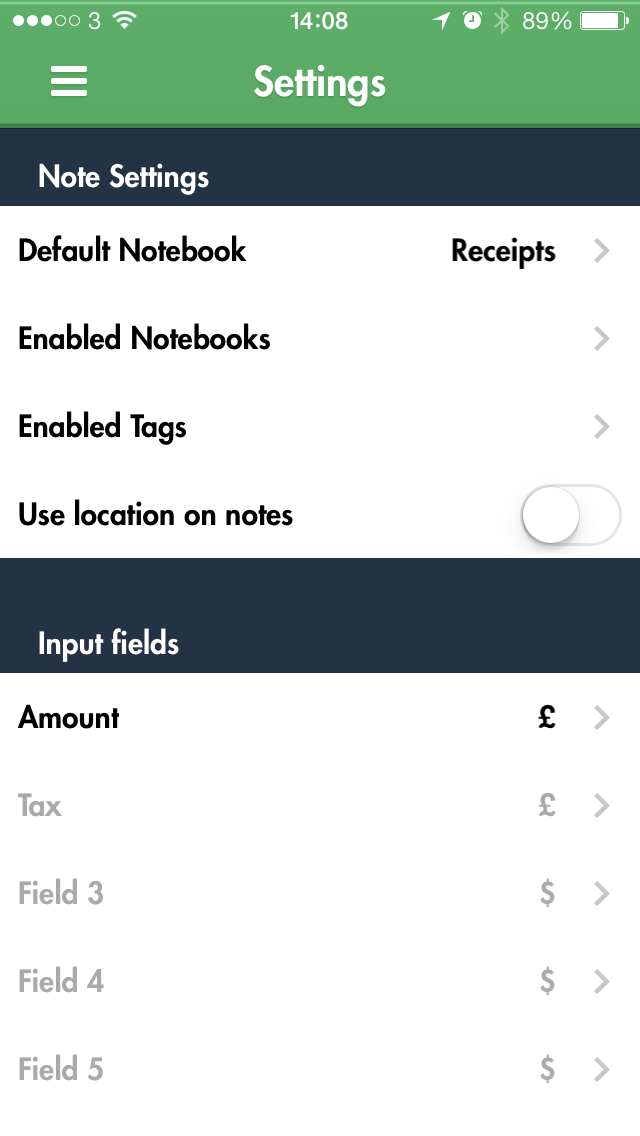 The Future, for Receiptmate and You — The main place where Receiptmate could improve is with its text recognition. The success-to-failure ratio just isn’t good enough, to the point where I simply don’t trust it. Worse, recognition problems occasionally arise from the automatic contrast and brightness adjustments Receiptmate itself makes. The smart design decision to allow manual entry if recognition fails lessens the annoyance, but I’d rather see the text recognition removed entirely. Plus, it can be frustrating when the automatic brightness and contrast adjustments render the receipt difficult to read, so I hope to see either some improvements to these adjustments
or more manual contrast control in a future update.

What if you want to stop using Receiptmate or Evernote in the future? Exporting all your receipts from Evernote is easy: all you would lose are the amounts entered manually or by text recognition, and since the amounts stored within Receiptmate are used to generate reports, you can create one final Excel spreadsheet with all your receipt data. This should make moving relatively painless. The scanned receipts are easy to work with as well, since they’re all named and dated in Evernote.

Making the leap to paperless can be psychologically wearing, due to worries about potential problems that might offset promised benefits. But if physical receipts are a pain point and you already use Evernote for online storage of documents, Receiptmate is worth investigating.

The ideal Receiptmate user would be an individual just starting out in the paperless world and looking to track expenditures for personal reasons — if your employer requires you to submit expense reports in specific formats or enter receipts into an invoice management system, Receiptmate may not meet your needs. However, for those of us who are just looking to do something with our receipts rather than throwing them out or letting them pile up, Receiptmate’s simplicity and focus are compelling.