Star Wars: Knights of the Old Republic (commonly called KOTOR) is one of my favorite games. Initially released for the PC and Xbox in 2003, the story takes place 4,000 years before the first Star Wars trilogy, putting you in the middle of a war between the benevolent Galactic Republic and the evil Sith Empire.

The iPad version of Star Wars: Knights of the Old Republic has been ported by Aspyr Media in a nearly flawless translation of the original. It turns out that the classic role-playing game is perfectly suited to touchscreen controls. The large on-screen buttons are just the right size for fingers, and since combat is turn-based, the iPad’s screen doesn’t hamper the action, because gameplay isn’t dependent upon split-second
accuracy.

Gameplay is based on the third edition of Dungeons and Dragons, so if you’re familiar with that system, you’ll be right at home. If not, KOTOR handles the mechanics for you, so there’s no need to track armor class ratings or look for dice. However, you do need to pick out your character’s attributes, initial skills, and feats in the beginning, and choose additional feats and skills at every level, but the game can handle this automatically if you prefer.

You start KOTOR by creating a character, who wakes up on a Republic ship, the Endar Spire, that’s under Sith attack. After escaping, you travel across the galaxy completing quests, making new friends, and eventually training to become a Jedi Knight, all leading up to the final showdown with the evil Darth Malak and one of the best plot twists of all time.

One of the great things about KOTOR is that it keeps much of the charm of the original trilogy, while adding its own unique touches. There’s a character who’s clearly a stand-in for Han Solo, piloting a ship that might as well be called the Millennium Falcon. But then you have companions like HK-47, a murderous, misanthropic droid who refers to humans as “meatbags.” His lines are often darkly hilarious, which is why he’s considered one of the best video game characters ever.

KOTOR is a free-roaming world — worlds actually. Drag on the left side of the screen to run around and drag on the right to move the camera. You interact with objects by tapping on them, and if you happen across an enemy, the game pauses automatically to let you queue up actions. While the combat is turn-based behind the scenes, the action plays out in real time, but you always have the option of pausing to think out your next move. 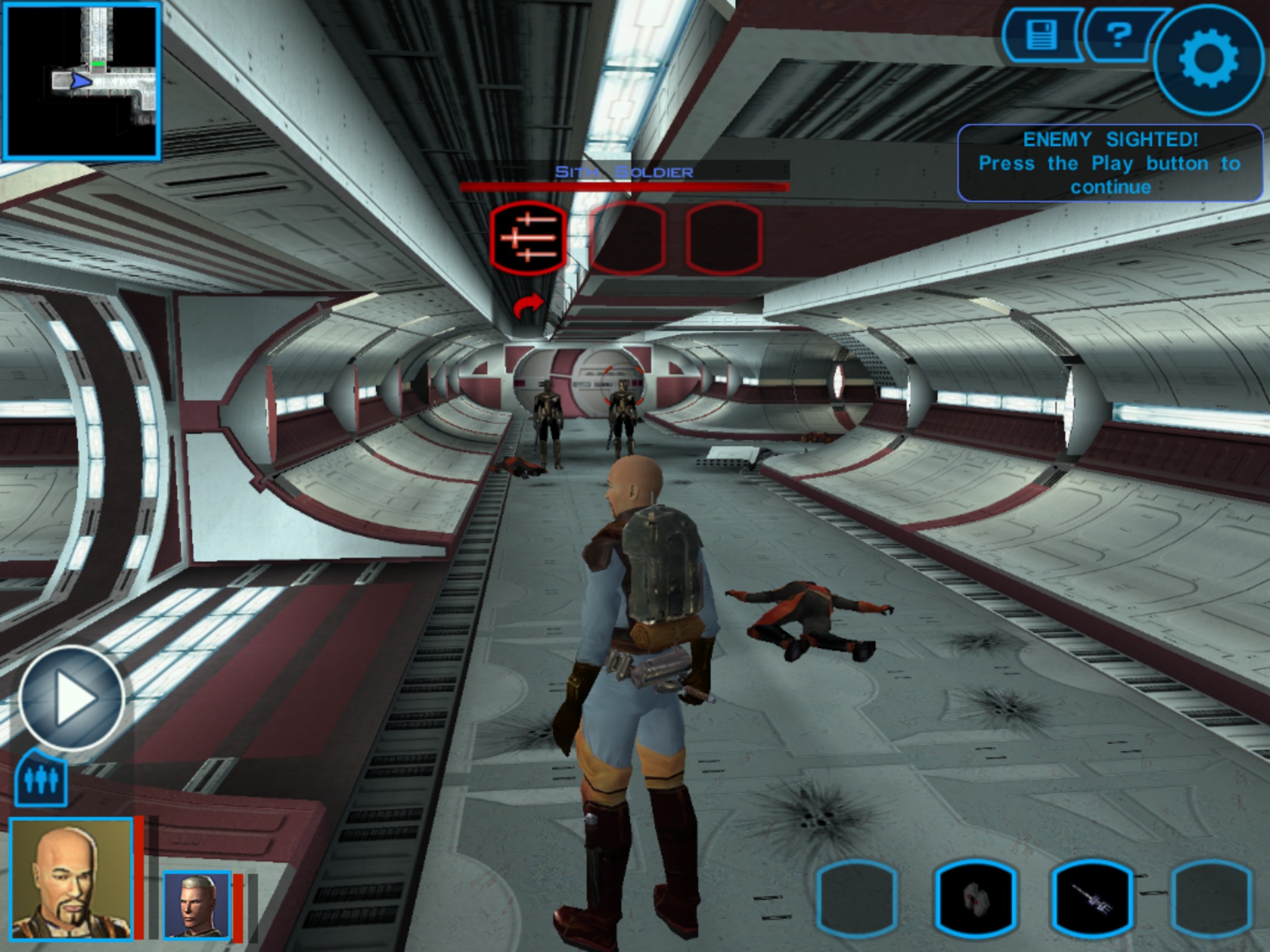 The original game was developed by BioWare, in its prime, and like most of BioWare’s role-playing games, KOTOR offers you moral choices. Your character has a gauge that measures whether your character leans more toward the light side or dark side of the Force. Do good and say nice things and you’ll grow in the light side. Do bad and you become more evil. It’s best to stick with one or the other, as the more aligned with a side of the Force you are, the stronger those Force powers are. For example, good characters are better at healing
and protection, while bad characters are better at shooting lightning bolts and telekinetically choking enemies. Your alignment also affects your appearance, what equipment you can wear, and even the course of the game, with multiple endings depending on the decisions you make. Would you rather defeat Darth Malak and the Sith, or kill him to take his place?

You’re not alone in your quest. Two companions can tag along at a time, and you’ll meet a number of them throughout the game that you can switch out. Your companions have different strengths and weaknesses that complement your character’s skills. You can also control a companion manually at any time for fine control.

If you’ve never played KOTOR before, I’d like to offer some tips. First, bear in mind that your character will eventually become a lightsaber-wielding Jedi, so it pays to invest in melee-related attributes and feats early in the game. It’s a while before you have access to lightsabers, but until then you can swing swords. Granted, it makes the beginning tougher, and you’ll feel silly rushing at a guy with a katana while he’s shooting blaster bolts at you, but trust me, it pays off.

Second, focus on your combat, persuasion, and Force abilities. Don’t waste skill points and feats on things like lock-picking and computer hacking, as those are the sort of things your companions can help you with. However, persuasion is an important skill, as it can open up gameplay options that otherwise wouldn’t be available.

Third, I found it helpful to turn up the control sensitivity in Options > Gameplay. The default is set pretty low, which means you’ll be dragging your thumb all over the screen to move around. I cranked it up to the highest level to save my hands the strain.

Finally, consider early on which side of the Force you want to fall on. I’m usually a goody two-shoes in these sorts of games, but for my first play-through, I went with the dark side, as it offers a number of powerful offensive abilities and, in my opinion, somewhat better equipment.

No matter how you play Star Wars: Knights of the Old Republic, it’ll provide dozens of hours of entertainment for the $9.99 asking price. If you’re a fan of Star Wars and are looking for some diversion this holiday season, you won’t want to miss it.

Comments About FunBITS: Star Wars: Knights of the Old Republic for iPad