I had promised Glenn Fleishman a piece for his latest venture, The Magazine, and I thought that my annual Thanksgiving trip to visit my brother and sister-in-law would be the perfect time to write it. But, rather than haul my aging MacBook along on the trip, I decided to compose the article on my sleek new iPad Air. As luck would have it, a review unit of Belkin’s QODE Ultimate Keyboard Case for iPad Air arrived at my door five minutes before the airport shuttle arrived, giving me just enough time to shove the unopened package into my carry-on bag before embarking on my journey.

When I arrived at my brother’s home, I unpacked the case and, using the included meter-long USB-to-micro-USB cable, plugged it into my iPad’s charger. The case must have been pre-charged at the factory, because less than ten minutes later, the charging light on the right side of the case indicated that the battery was full.

Meanwhile, I examined the packaging for a manual. All I could find was a single card-stock sheet with minimalist instructional diagrams labeled in English, French, and Spanish. Even those instructions were unnecessary, as it was obvious how to snap the iPad into the case, and I had already figured out how to charge the device. What I didn’t know was how to turn the case on or how to pair its Bluetooth radio with my iPad Air.

The answer to the first question is simple: once the iPad is in place, awake, and positioned for use, the case comes to life automatically. As for the second question, that, too, almost answers itself: you hold down the Fn key at the lower-left of the keyboard while tapping the Pair key at the upper-right. Pairing happens almost instantly, and doesn’t require typing a pairing code (though you do, of course, have to remember to turn on Bluetooth in the iPad’s Settings app). A blue light illuminates briefly to let you know that pairing has taken place.

Snapping the iPad into the case is easy: cut-outs around the edge of the case line up with the iPad’s ports and buttons so you can do it even in the dark. The iPad snaps in so securely that it’s harder to get the iPad out than to put it in! That’s a good thing, of course, since you don’t want the iPad to pop out accidentally. However, it took me a few tries to work out the easiest way to convince the case to give me my iPad back — I recommend you place the case on a flat surface first before you try popping the iPad out so you don’t send your precious tablet flying through space. 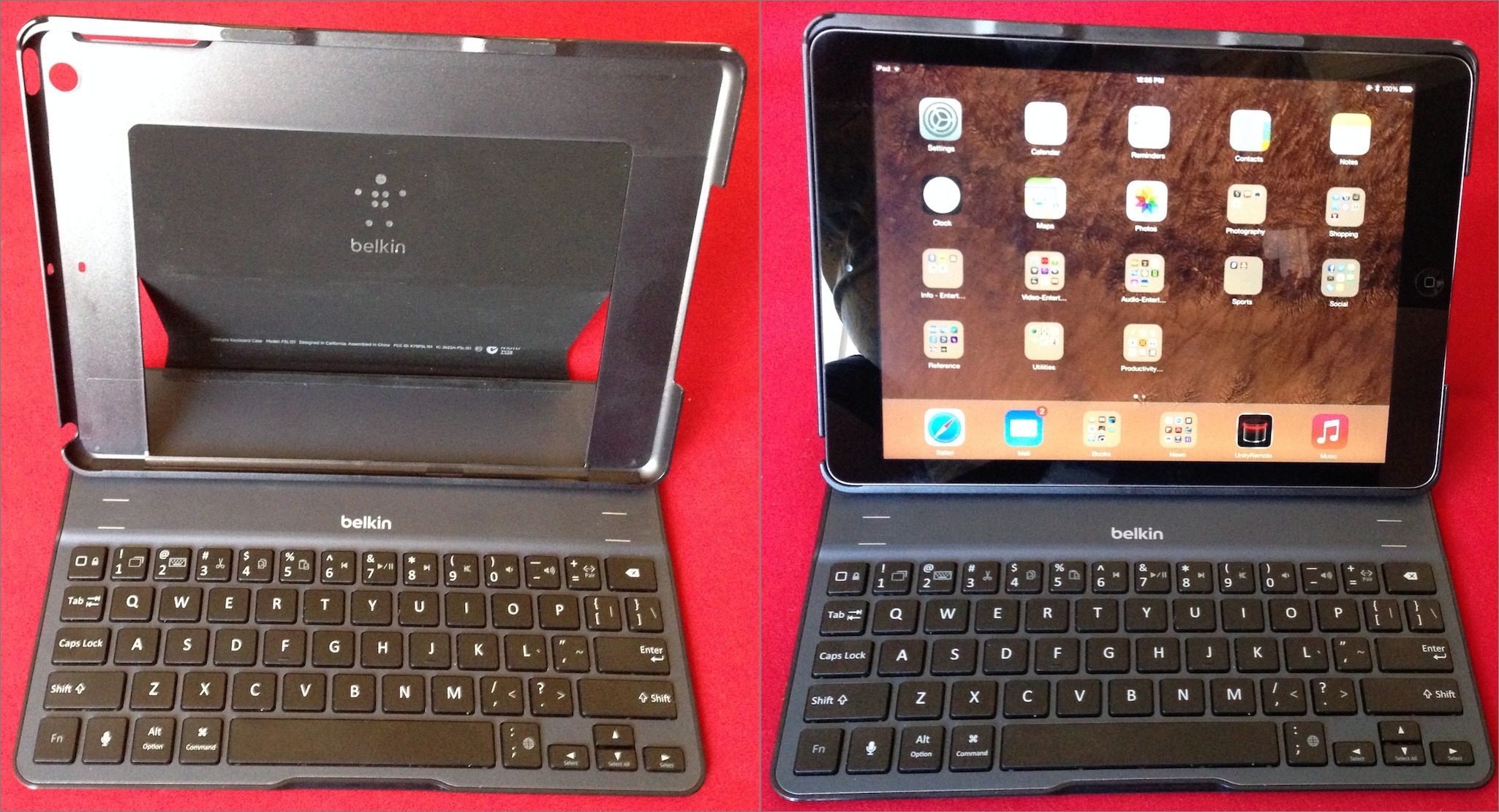 Although you have complete access to the iPad’s ports and buttons when the iPad is in place, the only ones you are likely to need are the Sleep/Wake button, headphone jack, and Lightning cable socket. The keyboard itself has a dedicated key for the iPad’s Home button, along with function keys (invoked when you hold down the Fn key) for controlling audio volume, muting, playing and pausing media, showing and hiding the on-screen keyboard, and even one for displaying the multi-tasking screen. When the iPad is sleeping, a quick
tap of the Home key on the keyboard wakes it.

There are also function keys for cut, copy, and paste, though you may not have to use them: the keyboard includes both standard Command and Option keys that worked with every text editing app I tried, so I didn’t have to retrain my fingers for common editing maneuvers. The same, unfortunately, cannot be said about touch-typing; the semicolon key is placed just to the right of the space bar instead of at its usual location to the right of the L key, so I found myself hitting the apostrophe key whenever I wanted a colon or semicolon. Also, the apostrophe key is narrower than the other keys, so even when I remembered its non-standard location, I often overshot it and pressed Return instead.

However, these are relatively minor quibbles. Aside from the half-size apostrophe key, I found the keyboard large enough to fit my hands, and the keys themselves provided a similar tactile response to those built into my MacBook. You won’t mistake the keyboard for a classic IBM Selectric typewriter, but it more than serves the purpose.

Physically, the case is rather sturdy. The bottom is aluminum, protecting both the keyboard and the iPad screen when the case is closed. The top frame, where the iPad snaps in, is rigid plastic with an imitation leather panel and a micro-fiber lining that protects the back of the iPad. The top frame attaches to the keyboard by that panel, which unfolds to act as a stand so you can angle the iPad when it is in use. You can flip the top frame around to hold the iPad one-handed, though that leaves the keys exposed on the back. 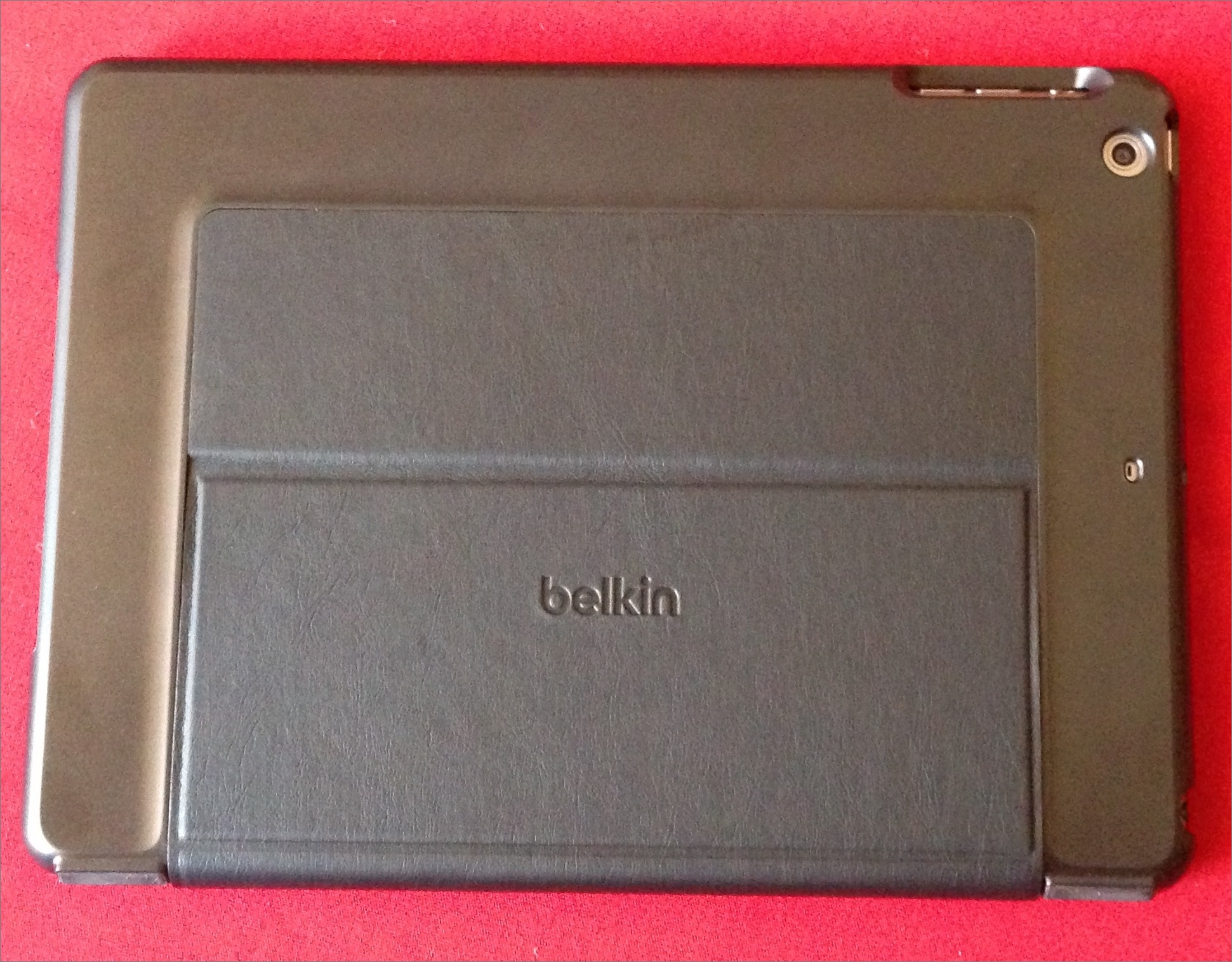 When open, the top frame holds the iPad in place with magnets; thin lines printed above the keyboard show where to align the top frame with the bottom, and there are three sets of them so you can adjust the viewing angle to your liking. The magnets also hold the case closed securely — I found that opening the case required more than a casual amount of force. Again, this is a good thing, since it keeps the case from opening accidentally.

The case by itself is somewhat heavier than the iPad Air — Belkin does not provide specs but, according to Amazon, the case weighs 1.3 pounds (590 grams), making the combined case and iPad Air just slightly heavier than, say, a third-generation iPad with a Smart Cover. That’s certainly not unbearable, but it’s not an arrangement you would use for extended periods of pleasure reading. You’ll probably want to free the iPad Air from its case when you curl up with a good ebook.

During my week of writing, I experienced a few glitches. Several times I had key presses go mad and repeat themselves until I tapped another key. Twice the keyboard suddenly became completely unresponsive; to cure that I put the iPad to sleep and then woke it up again, which re-established the Bluetooth connection. But those glitches were rare and hardly interfered with my work.

Battery life is exceptional: I haven’t recharged it since I gave it its initial charge. Belkin states that the case can operate for 264 hours (about a month of 8-hour days) on a charge, and it can hold a charge on standby for about six months. I have come nowhere near either of those limits. Even heavy users of the case should not have to charge it more than once every couple of months.

At $129, Belkin’s QODE Ultimate Keyboard Case for iPad Air is pricey, but not overpriced: it’s lightweight, sturdy, and very easy to set up and use. It may not turn your iPad Air into a MacBook Air, but it does make your lightweight tablet a practical alternative to a MacBook for many tasks.