When I came on as managing editor of TidBITS, my first big initiative was the FunBITS column — a weekly exploration of games and other enjoyable things in Apple’s ecosystem. We’ve had a blast finding cool things to tell you about in the past year, but since our world never sits still, we wanted to start 2014 with a follow-up on some of our favorite FunBITS features.

The Deceptively Simple Games of Matt Neuburg — Our own Matt Neuburg has refreshed his simple yet challenging games Zotz and Diabelli’s Theme for iOS 7 (LinkSame hasn’t changed). The games play the same, and look similar, but as Matt explained in “How iOS 7 Will Affect Developers — and You,” (16 December 2013), the behind-the-scenes changes necessary to update them for iOS 7 were anything but trivial.

Fortunately, Matt was able to pour his hard-earned knowledge into a pair of O’Reilly books: “iOS 7 Programming Fundamentals” and “Programming iOS 7, 4th Edition”.

Dots for iPhone — Since we reviewed Betaworks’ connect-the-dots game, the company has added iPad support, multiplayer mode, and a $1.99 Endless Mode. Playing the original version on the iPad was weird, since the dot grid was the same size as on the iPhone! Fortunately, Betaworks realized their mistake and quickly released an update that added different zoom levels to take better advantage of the iPad’s screen. 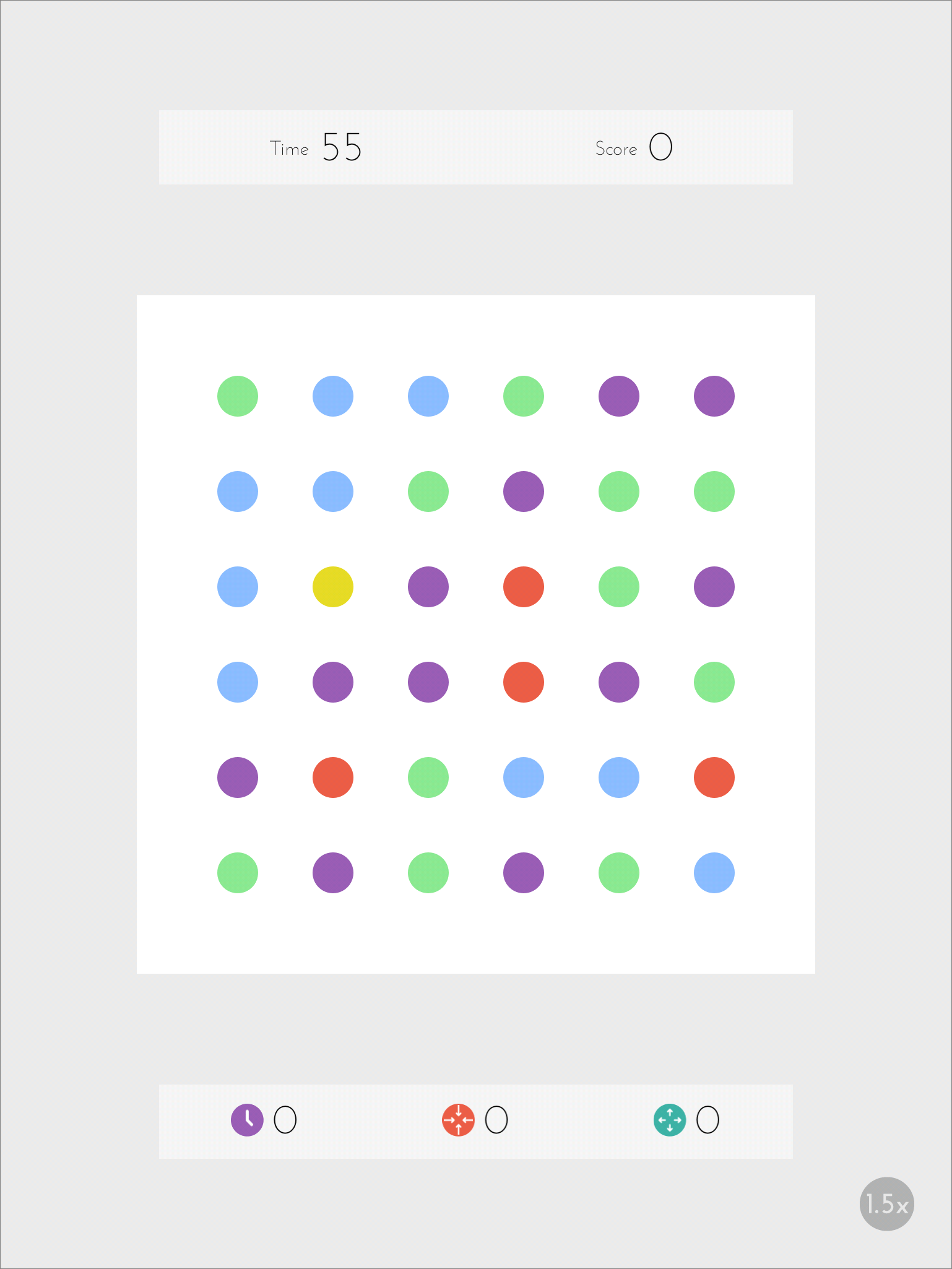 Marvel Unlimited App a 97-pound Weakling — Imagine if you could read (almost) the entire Marvel Comics archive on your iPad for a low monthly fee? And now imagine that it’s wrapped up in a slow, buggy app. That was the premise of my review of Marvel Unlimited.

Despite giving the service a poor review, I eventually gave in and purchased an annual subscription for $69. Overall, I love it, but my opinion remains unchanged.

Upgrading from the iPad 2 to the iPad Air solved many of my performance complaints, but other problems remain. Sometimes comics won’t load at all, and, as I’ve found after extensive use, large swaths of back issues are missing from the library. This was especially painful when I was working my way through Chris Claremont’s legendary run of “Uncanny X-Men” and hit a major gap in the 1980s, with a number of issues missing. (To give an idea of how important Claremont was to X-Men, practically every TV and film adaptation is based on one of the stories from his 16-year run, including the upcoming movie “X-Men: Days of Future Past.”)

Even with all the problems I have with the Marvel Unlimited app, the service is one of the best deals for comic fans. For the True Believer, Marvel has also added an Annual Plus subscription level, for $99 per year, with extra perks like an Ultron figurine, a neat box to store your comics, a limited-edition comic, discounts on Marvel purchases, and special access to Marvel events.

Duolingo Makes Learning Languages Enjoyable — Our British correspondent Chris Armstrong was enamored of this game-ified language-learning app, and he wasn’t alone; Apple named Duolingo its App of the Year for 2013. Adam and Tonya even put some time into learning French with Duolingo, but as is so often the case with such goals, Duolingo fell by the wayside during the many weeks of late-night work surrounding Apple’s release of OS X 10.9 Mavericks.

Badland for iOS — Of all the iOS original games I reviewed this year, Badland stands out from the field, with beautiful graphics, perfect touchscreen controls, and continuous free content updates. Apple agreed, and named it one of its 2013 games of the year.

Since I reviewed Badland back in June 2013, developer Frogmind has been hard at work adding additional levels, an official guide, and ports for Android and BlackBerry 10. It’s the best $3.99 you can spend on gaming in the App Store.

Desert Bus for iOS — While Penn and Teller’s long-lost “classic,” arguably the worst game of all time, may not be much fun to play, it has spawned one of the best charity fundraisers in gaming: Desert Bus for Hope.

This year’s Desert Bus for Hope, held in December, raised a whopping $523,500 in the six hours the LoadingReadyRun crew drove a virtual bus between Tucson and Las Vegas.

Proceeds from the game go to support the Child’s Play charity, so while you may be bored silly playing it, your efforts help hospitalized kids avoid crushing boredom by playing far more enjoyable video games.

FTL: Faster Than Light — Of the games I reviewed this year, FTL remains one of my favorites. Its simplistic graphics hide a rich universe of complex gameplay. But I lamented at the time that it wasn’t available for iOS, as it would be a perfect couch game.

Looks like my wish will be granted: FTL’s developers have announced an iPad version for early 2014. Not only that, but they’re also launching a free expansion, FTL: Advanced Edition. The content expansion will also be rolled into the iPad version. If you’re a purist, you can turn off all the new content.

You might be disappointed to learn that FTL won’t be coming to smartphones. The developers said they tested it, but it didn’t work well. I think that’s a sensible decision, given the game’s rich interface. Nevertheless, I’m anxiously awaiting the iPad version.

Thunderspace Provides Your Own Private Storm — As Chris Armstrong wrote in FunBITS a few months ago, Thunderspace is an example of doing one (rather unusual) thing and doing it extremely well, namely simulating a thunderstorm on your iPhone. How do you improve upon a thunderstorm?

Thunderspace’s developer, Taptanium, has gone to great lengths to do so. Thunderspace 2 adds worldwide syncing, so every Thunderspace 2 user experiences the same storm at the same time (and presumably you could use multiple iOS devices to fill your house with a thunderstorm). Even more amazingly, they added the capability to control a fan via the Belkin WeMo to simulate wind.

While I haven’t used Thunderspace beyond my initial testing, I have to commend Taptanium for their creativity in bridging the gap between the virtual and real worlds. I’d love to see more real world synchronization integrated into games.

The one drawback of the improvements to Thunderspace is that the price has risen since our initial review, from $0.99 to $3.99. That’s not expensive, but it makes the novelty app less of an impulse buy.

In Praise of BioShock Infinite for Mac — Arguably the best big-name Mac game of the year, BioShock Infinite impressed us with its story, gameplay, graphics, and performance. (Its publisher, Aspyr Media, is a TidBITS sponsor, but I reviewed the game well before the company sponsored TidBITS.)

Since publishing Bioshock Infinite, Aspyr hasn’t slowed down. The company released the Burial at Sea — Episode 1 expansion (as a $9.99 in-app purchase) on the same day as other platforms, added the Clash in the Clouds expansion (another in-app purchase for $4.99), and made the Columbia’s Finest expansion free (as an in-app download) for all owners of the game.

Burial at Sea takes you back to Rapture, the failed underwater utopia that was the setting of the first two games. Clash in the Clouds doesn’t add anything new to the story, but offers four new levels with 60 challenges. And Columbia’s Finest offers no new content, but gives you two new items, five lock picks, 500 Silver Eagles (the game’s currency), and two new weapons.

Why Apple May Win the Gaming Market — In this ambitious article, I predicted that Apple was soon to release an A7-powered Apple TV with an App Store as a way of entering the lucrative gaming market.

I was wrong. Way wrong. Not only did Apple not update the Apple TV hardware, the first round of MFi game controllers were expensive, poorly reviewed flops. And despite Apple adding more content to the Apple TV, there’s no sign of an App Store in sight.

Despite being terribly wrong, the lack of new Apple TV hardware was a bit of a relief, since I was already deep into my first draft of “Take Control of Apple TV,” (currently being streamed for TidBITS members; see “‘Take Control of Apple TV’ Streaming in TidBITS,” 4 November 2013) and I was afraid I’d have to do a total rewrite.

Despite my far-flung predictions, the old-fashioned game console seems to be here to stay, with the newly released PlayStation 4 and Xbox One each selling a million units within 24 hours. Meanwhile, micro-consoles like the Sony Vita TV and the Ouya barely appeared on the radar, with the Ouya being named “Best Joke of the Year.”

Despite that, I still think gaming is a space Apple could make headway in, but it doesn’t seem that the company has much interest in it.

Star Wars: Knights of the Old Republic for iPad — Just after I reviewed this classic Star Wars role-playing game, Aspyr Media updated it with improved graphics and iPhone support, making a great game even better. Future updates will include MFi game controller support and syncing of saved games via iCloud.

What’s Next for FunBITS — 2013 was an amazing year for iOS gaming, and I wasn’t able to get to some of them, like Ridiculous Fishing, the Zelda-like Oceanhorn, and the just-released Republique, which raises the bar for iOS games to a whole new level.

I hope to look at these three in 2014, as well as the iPad version of FTL and many other amazing games that are sure to be released in the next year. But FunBITS isn’t just about gaming — we want to cover technology-related connections with other hobbies for those who prefer leisure-time activities like bird-watching, genealogy, or cycling. So if you have a favorite app or piece of hardware that you’d like to see us cover in FunBITS, let us know!

Inside TidBITS Just for Fun

Comments About FunBITS: 2013 in Review