Greetings from Las Vegas, where the pre-events for the International CES are starting two days prior to the official onslaught, and where the weather is a heck of a lot better than what I left behind in Philadelphia. It was enough to inspire me to coin a neologism upon arrival.

The events prior to the show include demos from companies that have paid extra to appear in these side events, with the hope of getting more focused coverage from the press while we are wined and dined — the press being major suckers for free food and drinks. Sunday’s events included the official CES Unveiled and the Social Radius Startup Debut.

As I did last year, the emoji present ? icon in any of my CES coverage indicates that I received some sort of freebie from the company, usually a demonstration model of the product. (To get emoji to appear in Google Chrome, install the Chromoji extension.)

In addition to items I saw in person, I’ll also be clearing the decks of some interesting items that came through in email but that I won’t necessarily be able to track down at the show.

EnerPlex Jumpr Slate — A few years ago, the most amazing thing I saw was a blender that ran on inductive power (see “CES 2010: Blending the Future,” 7 January 2010). This year, it’s a battery: the Jumpr Slate 10k from EnerPlex, which packs 10,000 mAh into an iPad mini-sized package. It weighs just a few ounces, and perhaps even more astonishing is its $100 price point. This is the MacBook Air of external batteries; it’s shown edge-on in the photo below. EnerPlex also sells a 5,000 mAh battery with half the life for $60, and the Surfr iPhone case for the iPhone 5 and 5S, which
combines a 2,000 mAh battery with a solar power cell in a rather slim case for $100. 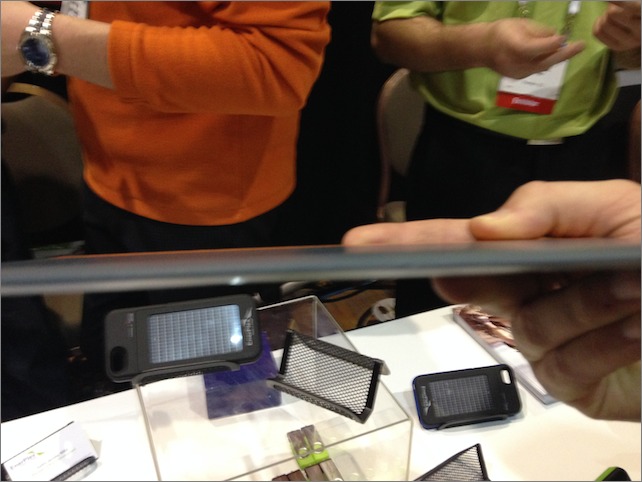 FUZ Designs EverDock — FUZ Designs sent me a pre-release version of their EverDock Duo ?, which has since begun shipping. It’s a phone and tablet charging dock designed for two devices; the cables are mix-and-match, letting you use Lightning or micro-USB tips as necessary to fit your gizmos. Channels run through the dock and out the back, allowing the dock to lie flat while the included cables neatly reach their sweet, sweet USB power. (Unfortunately, my model didn’t include the cables, so I couldn’t judge the lie-flat principle in action.) The EverDock has an impressive enough weight and heft to be used by Colonel Mustard in the library for nefarious purposes, and both provides an attractive stand and lets you use the frontmost device during charging. $70 direct from FUZ Designs; the single-device EverDock is $50. 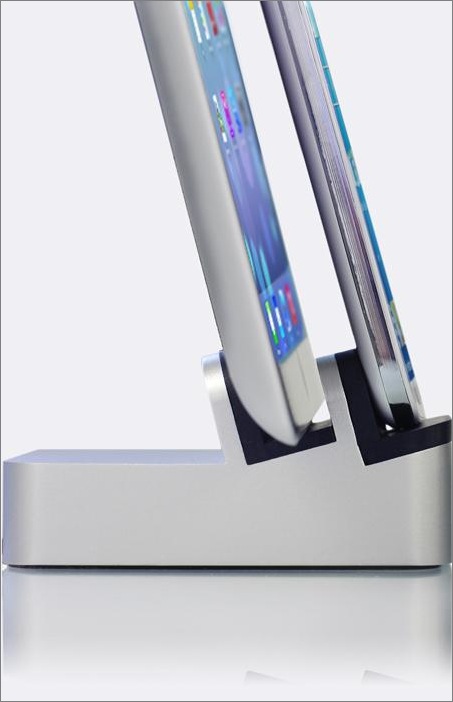 Rolling, Jumping, and Flying Robots — The Orbotix Sphero, the robot that rolls, is gaining a big brother in the Sphero 2B, a robot that rolls and tumbles. If you’ve seen “Batman Begins,” the Tumbler provides a pretty good idea of what this puppy looks like in action. I remain skeptical about how long an iPhone-controlled rolling toy can remain captivating if you’re not a cat, but it was amusing to watch for a few minutes. The new Sphero 2B is in prototype now, due for shipping later this year.

Meanwhile, Parrot, maker of the AR.Drone iPhone-controlled quadcopter that gathered much press attention in the past, came down to Earth with its own rolling robot, the camera-enabled Jumping Sumo. Instead of tumbling, it can jump several feet in the air, garnering many ooohs and ahhhs when the demonstrator caught it on the iPad he was using to control it. The Parrot booth was mobbed and I didn’t get details on shipping, nor is the Jumping Sumo currently on the Parrot Web site, but I’ll update with details if I make it to their CES booth. 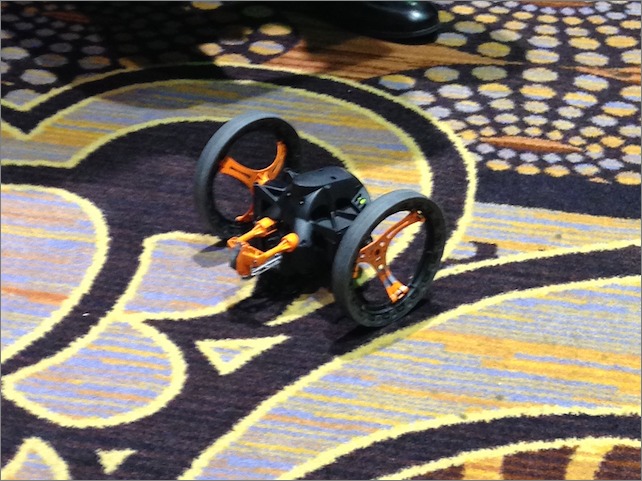 Also garnering notable audience appreciation was DJI’s Phantom 2 Vision quadcopter with a wide-angle 14-megapixel camera; I can verify that standing under this in a hot room enables one to feel a very nice cool breeze. It’s probably fun to fly too, but it’ll set you back $1,200 if you want one of your own.

PowerUp 3.0 Smartphone Controlled Paper Airplane — While we’re still airborne, you have until 25 January 2014 to become a Kickstarter backer of the PowerUp 3.0 Smartphone Controlled Paper Airplane, a nifty low-power Bluetooth device that adds a propeller and Bluetooth control to a paper airplane. The project has so far raised nearly $900,000, just a wee bit over its initial $50,000 goal, and the 3.0 version (which adds remote control to the existing 2.0 model) will ship in May
2014. $40 gets you the basic kit on Kickstarter; pricing after release has not been announced.

FrogPad2 — I haven’t yet had a chance to see one in person, but I’ll be looking out for the forthcoming FrogPad2, a one-handed keyboard designed for use with pretty much anything that can take Bluetooth input. FrogPad (the company) claims that after a day’s use you’ll be able to type 40 words per minute, but the more interesting question is whether it’s better than thumb typing or voice recognition for on-the-go writing. And as a guy who went through a painful transition from QWERTY to Dvorak some years back, I’m curious whether developing one-handed
muscle memory does anything to impede regular two-handed typing skills. FrogPad is donating 25 keyboards to charities for use by wounded veterans, and will reportedly donate two more for anyone who purchases the “You + 2” package for $279 pre-order; the regular pre-order price is $149. 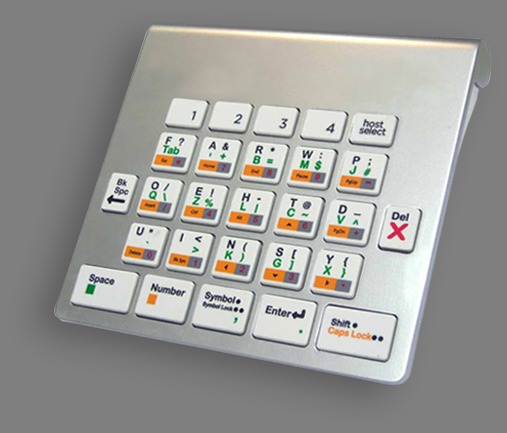 U.S. TechVets — Speaking of services for veterans, the Consumer Electronics Association is launching a new organization, U.S. Tech Vets, to aid the transition from military to civilian positions for armed forces veterans. In association with nearly a dozen other organizations and Monster.com, U.S. Tech Vets has a “Military Skills Translator” that converts military job descriptions into corporate positions. The front page of the site also contains information about continuing education and assistance for wounded veterans.

TREWGrip — In other novel keyboard news, I saw a prototype of the TREWGrip mobile QWERTY keyboard, slated for shipping in the latter half of 2014. You hold the TREWGrip in both hands and attach a phone or tablet to the center section; you type with your fingers on the back of the TREWGrip, which lights up on the front to show which keys you pressed. Meanwhile, your thumbs access common non-typing keys, also on the front, such as the arrow keys and Spacebar. TREWGrip says that a QWERTY touch-typist (which I unfortunately no longer am) can achieve 90 percent of their regular keyboarding speed in
only a day or two of heavy usage. Prototype models had either silicone or full-travel mechanical keys, and both let you type on a keyboard (with practice) while standing, walking around, or reclining. Pricing for the TREWGrip will be in the $250 to $350 range.

TradeYa — Startup TradeYa had an interesting demo of their new platform for bartering items over the Internet. According to CEO Jared Krause, they deconstructed the social impulse behind barter — which, he pointed out, children do instinctively — and used that research to design the interface to bring together people who might want each other’s stuff or services. The site just left private beta and is accepting new signups. TradeYa charges a $3 service fee on both ends of a completed barter transaction, regardless of the value of what is traded.

CTA Digital Universal Pedestal Stand with Roll Holder for Tablets — Lastly, for those who can’t stand to be away from their tablets for even a minute, CTA Digital has announced a universal tablet stand and roll holder for the smallest room in the house. Personally, I think the product image qualifies as being the official logo for the kind of gadget you find only at CES. An iPad stand for the bathroom may sound like a strange item, but CTA Digital claims that they came up with the idea after their iPad-only model last year was a hot seller. 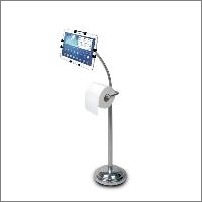 Comments About CES 2014: CES Unveiled and the Startup Debut