Greetings from day one of the International CES and the ShowStoppers event at the Wynn, where the Wi-Fi still costs $10 per hour but the catering is excellent. The perennial problem with CES — exhibit hall exhaustion — is setting in with a vengeance already, so I’ll skip the rambling introduction and move on straight to the gizmos you’re dying to learn about.

More Rolling Robots — Rolling robots are apparently a serious trend this year. Wowwee demoed the MiP, a $119 robot that dances to music, follows your hand gestures, and can be controlled from an iOS device. It can also carry things on a plastic tray, allowing for a somewhat sadistic version of Jenga as you attempt to overload its capacity to balance. Check it out in this short video.

I may have fallen into a reality distortion field, but I came away from the Double Robotics booth thinking that their rolling robot may actually be useful. The Double, which you may have seen demonstrated (and somewhat mocked) on The Colbert Report, carries an iPad at 47-60 inches (119-152 cm), and is controlled from a different iPad anywhere on the Internet. It shows the image from the remote iPad, so picture a robot cheerfully rolling down an office hallway with your face on it. As
the Double spokesman pointed out, using a Double allows you to turn to face various people in conversation, attend meetings, and wander around the office. But at $2,499 (plus the cost of an iPad), it’s a steep price for telepresence. 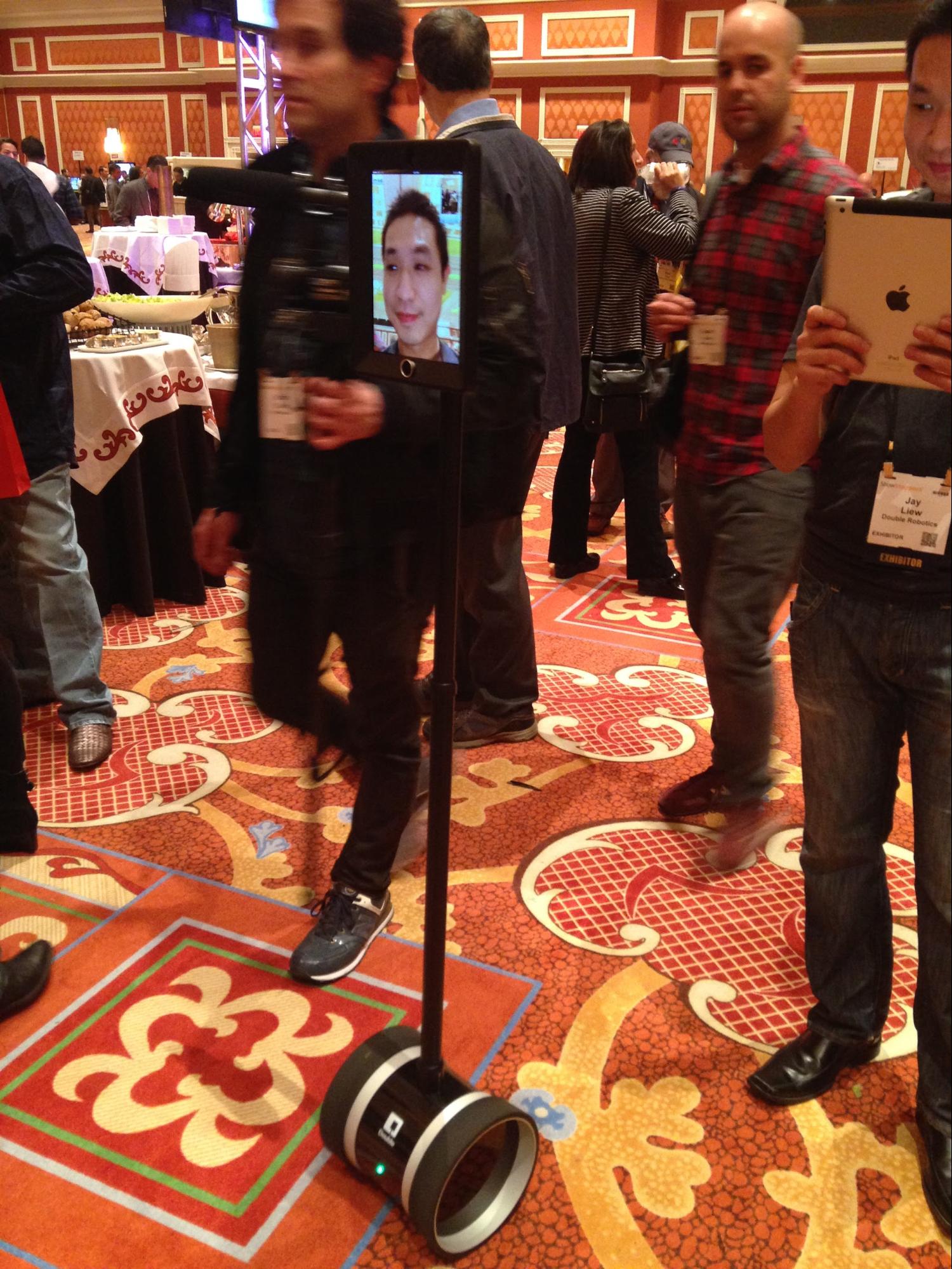 Drawing New Dimensions — A three-dimensional pen might sound like a contradiction in terms, so perhaps it’s easier to think of the WobbleWorks 3Doodler as a hot glue gun for plastic. Load the 3Doodler with a colored plastic insert, and press one of two heating buttons on the bottom of the pen (which more closely resembles an oversized cigar); a high-heat button melts the plastic for drawing on a 2D surface, and a low-heat button enables drawing vertical plastic lines, starting from the surface as a base. The company offers the 3Doodler with either PLA or ABS plastic, and has provided a comparison of the characteristics of each. Newly announced at CES: a 3Doodler Nozzle Set that allows drawing the plastic in different sizes, the DoodleStand holder to set aside the 3Doodler safely while working, and DoodleBlocks molds that act as templates for the 3Doodler. WobbleWorks is currently fulfilling orders from a successful Kickstarter campaign and is offering pre-orders from its Web site for $99. 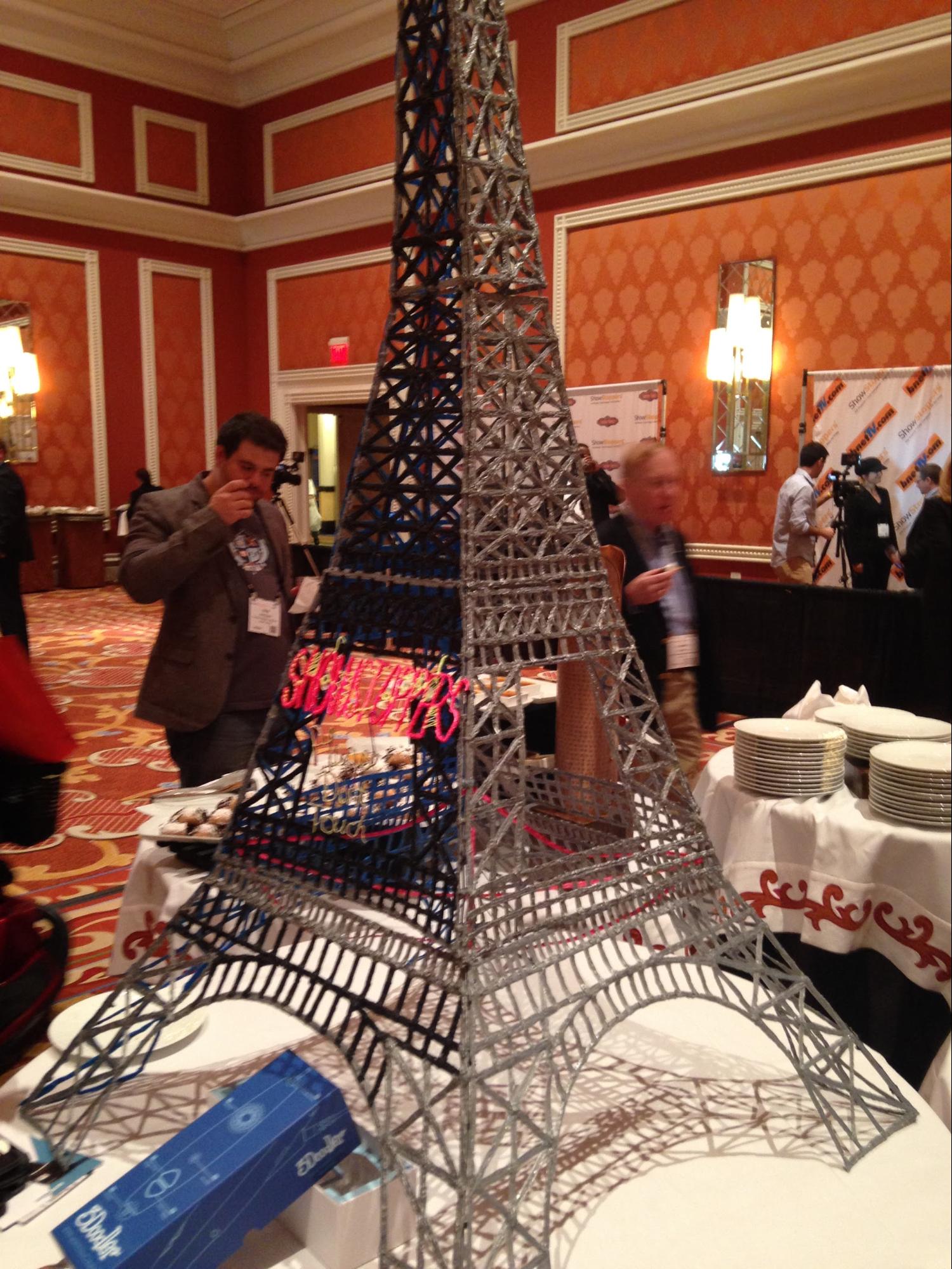 Maternal Oversight — Sen.se has an intriguing idea in their new product, the Sense Mother. The Mother (which resembles a shmoo more than my actual mother) is an adorable receiver that picks up signals from small wearable devices, called Motion Cookies. A series of apps for the Mother determines how each Cookie is monitored; for example, a Cookie may be assigned to a bottle of medication, and hence if it’s not moved, the Mother can send an email reminding you to take your meds. (Or telling you to remind someone else to do so; the Mother marketing materials are heavy on parenting
and eldercare.) There are a dozen or so apps now, including “did my kid brush his teeth?” and “is the fridge open?” But I hope to see Sen.se come back next year with hundreds of applications for this novel gizmo. Mother is slated to ship in the second quarter of 2014 for $222, which includes four Motion Cookies; additional Cookies can reportedly be purchased in a $99 4-pack. 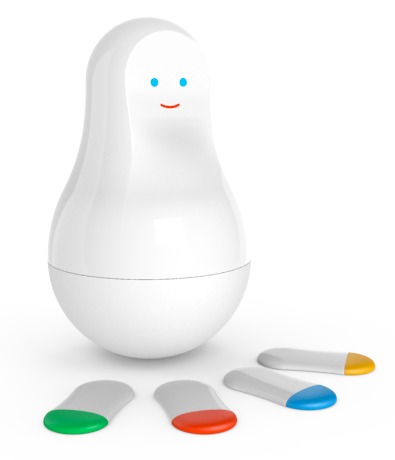 Light from Solar and (Sort of) Wind — I’m tickled by the idea of an inflatable lantern. The Luci Aura packs flat and inflates into a tabletop lantern, which can cycle through various colors or stay on a single one. Better still, it’s solar-powered and can run for 12 hours after charging for an eight-hour day. Mpowered will begin selling the $24.99 Luci Aura on their Web site in the next two months, and will let customers donate Luci Auras to communities in developing nations that don’t have access to an electrical grid. Already available is the $14.99 Luci, a colorless precursor of the Luci Aura. 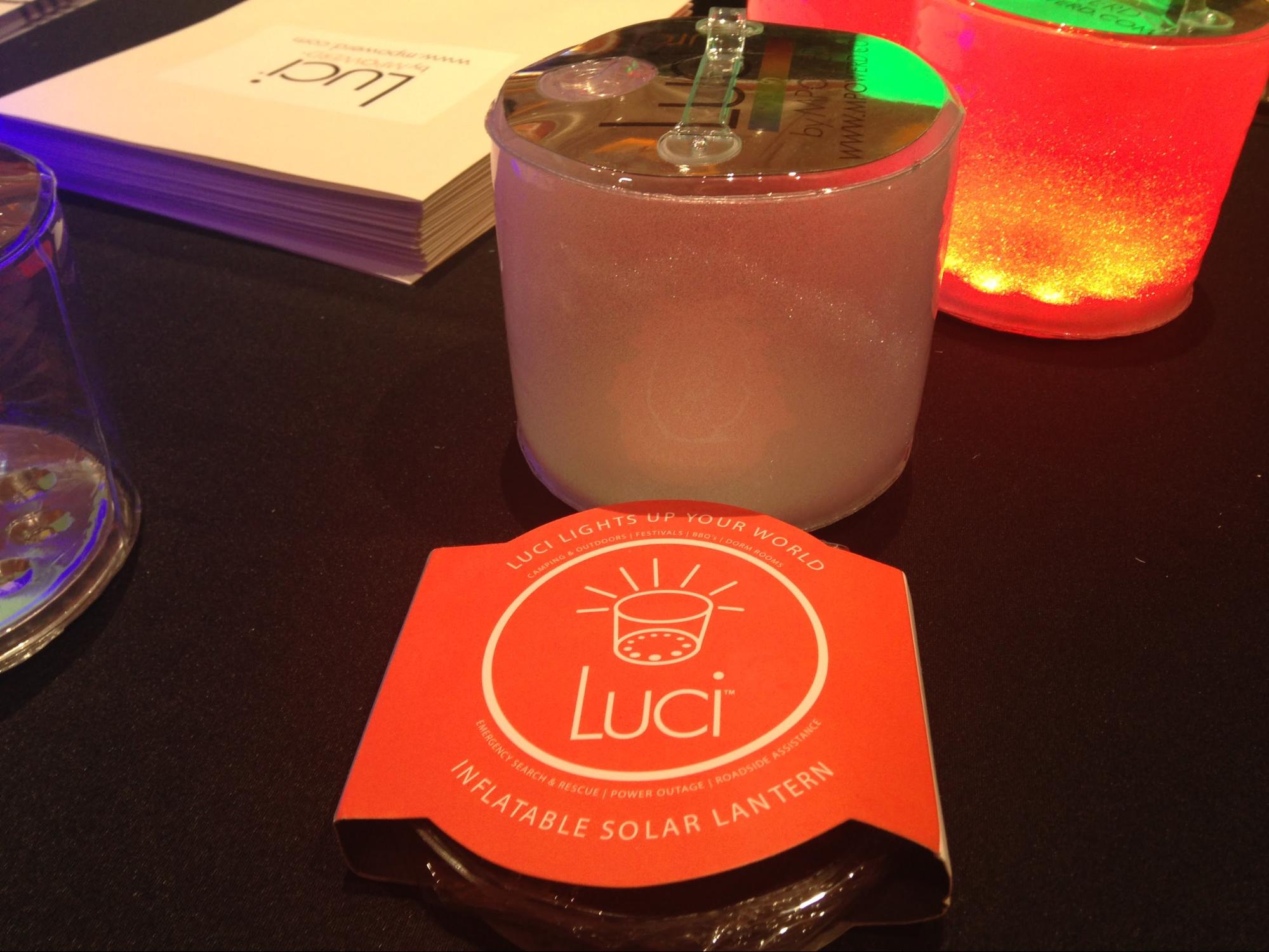 Is There an App for That? — Have an idea that you want someone else to turn into an app? Well, it just might be a Dandy idea. Dandy is a crowdsourced platform that tries to connect great ideas for apps with application developers. Post your idea to Dandy — or log in and browse the list of existing ideas — and your account will be credited with an amount of activity contributing to the idea. If the developers at Dandy, or a community of crowdsourced developers Dandy hopes to nurture, ever turn it into a real app, you’ll be awarded a share of the profits from the app’s sales. Bonus points to Dandy for the prominent placement of a magic
View-Master (see the View-Master-inspired Poppy in “CES 2014: The Pepcom Experience, When Monkeys Fly,” 8 January 2014) in Dandy’s promo video — the View-Master is back!

Really Fast Rapid Charging — I was unclear on why an Anker Astro battery might be any different from the dozens of other external chargers on display here, until a colleague mentioned, “Man, that thing gets my phone up to a 40% charge in 20 minutes.” Anker ? uses a system they call PowerIQ to identify what kind of phone or device is connected to it, and then pushes down the exact amount of power to maximize the charging speed of the device. Anker batteries come in a range of sizes and capacities; the company also sells desktop USB chargers. 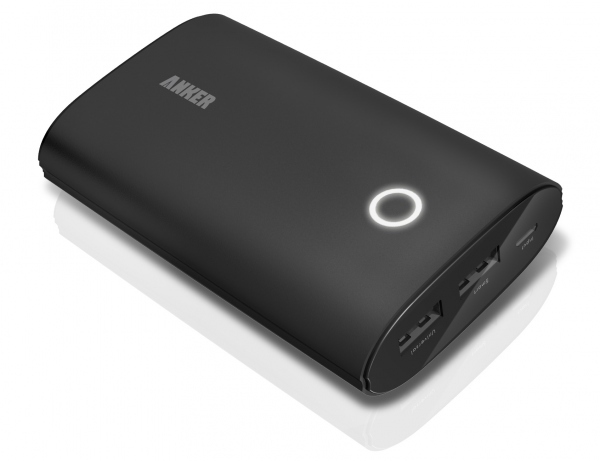 The Future’s So Bright — Do you suffer from Computer Vision Syndrome? That’s the term used by the American Optometric Association for the temporary eyestrain caused by staring at a backlit screen for too long. Apparently, 80 percent of us get it from time to time.

That said, count me as skeptical that we’re doing ourselves any long-term damage by using these screens. But I’m contradicted by the folks from the Spanish firm Reticare, who have measured the actual impact of computer use on retinal cells. Their product, a screen protector for iPhones and iPads that blocks certain wavelengths of LED light, “improves retinal cell survival by 83 percent.” That’s a frightening phrasing of that statistic — and somewhat meaningless in the absence of a measurement of retinal cell death in normal conditions. But they’re basing such claims on a significant body of research, and if you’re concerned, keep your eyelids peeled for when they get U.S.
distribution and pricing; at the moment, their products are listed from €12.95 for phones up to €49.90 for desktop computer monitors. 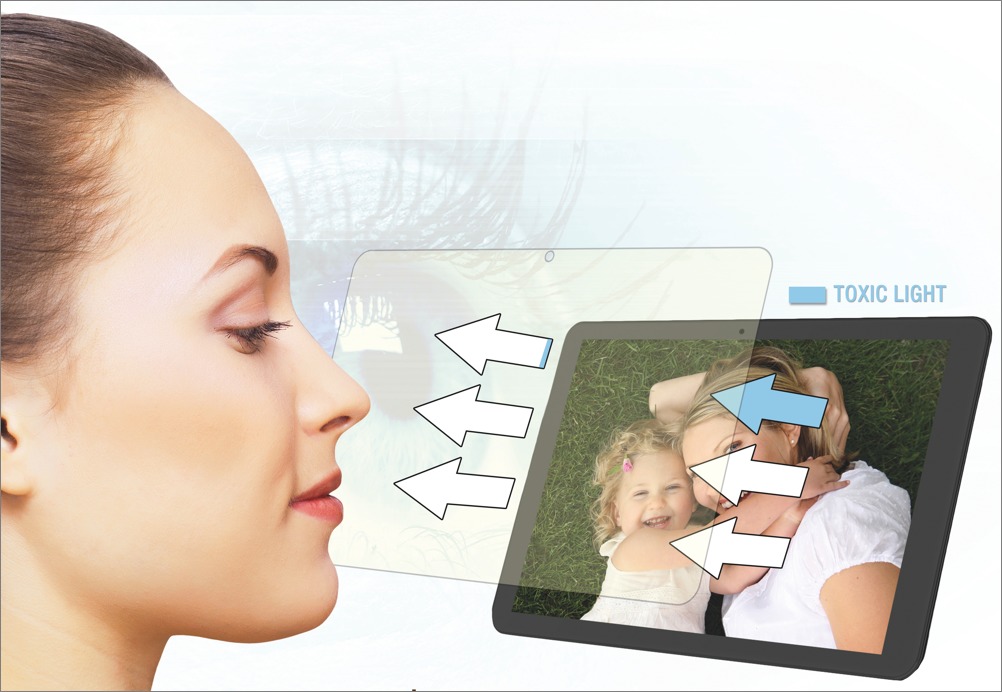 Geeky, and Proud of It — Finally, back in the old days, owning a shoulder holster for your Newton MessagePad marked you as a special kind of geek, one who valued practicality perhaps a bit too much. Well, after schlepping a backpack across 38 square miles of CES showroom floor, I’m willing to say the heck with it: the $64.95 TechSling that lets you carry your iPad and other gizmos flat against the sides of your body sounds like a great idea to me. New at the show is the TechSling
Sport, which will retail at around $70, made of a breathable lightweight black fabric; like the TechSling, one side holsters your iPad or iPad mini, while the other side holds an iPhone and has pockets for various other doodads.

CES 2014 Tech News
Cookies & Privacy: We wish we were talking about chocolate-chip cookies here, but our Web site—like nearly all others—relies on a few minor digital cookies. Various laws around the world require us to tell you that fact, so consider yourself informed, if not nourished. By continuing to use this site, you agree to our use of these cookies. Cookie and Privacy Notice