Head tracking was once an obscure technology, relegated to those with special needs and virtual reality enthusiasts. But now, thanks to products like the Microsoft Kinect, camera-based motion tracking has moved into the mainstream. With the multiple sensors and cameras in the iPhone, iPad, and iPod touch, it was only a matter of time before head tracking came to mobile gaming.

Umoove is a startup intent on bringing head and eye tracking to the small screen, and the company has released its first proof of concept to the App Store: Umoove Experience for iPhone and iPad.

The free Umoove Experience has you flying around a desert village — perhaps an homage to the classic game Magic Carpet. Gameplay is as simple as it gets. There are 14 potion bottles scattered in and around the village. Each one adds more time to the clock, and your goal is to fly around and collect all 14 before the clock runs out. (Note that the game operates only in portrait mode.) 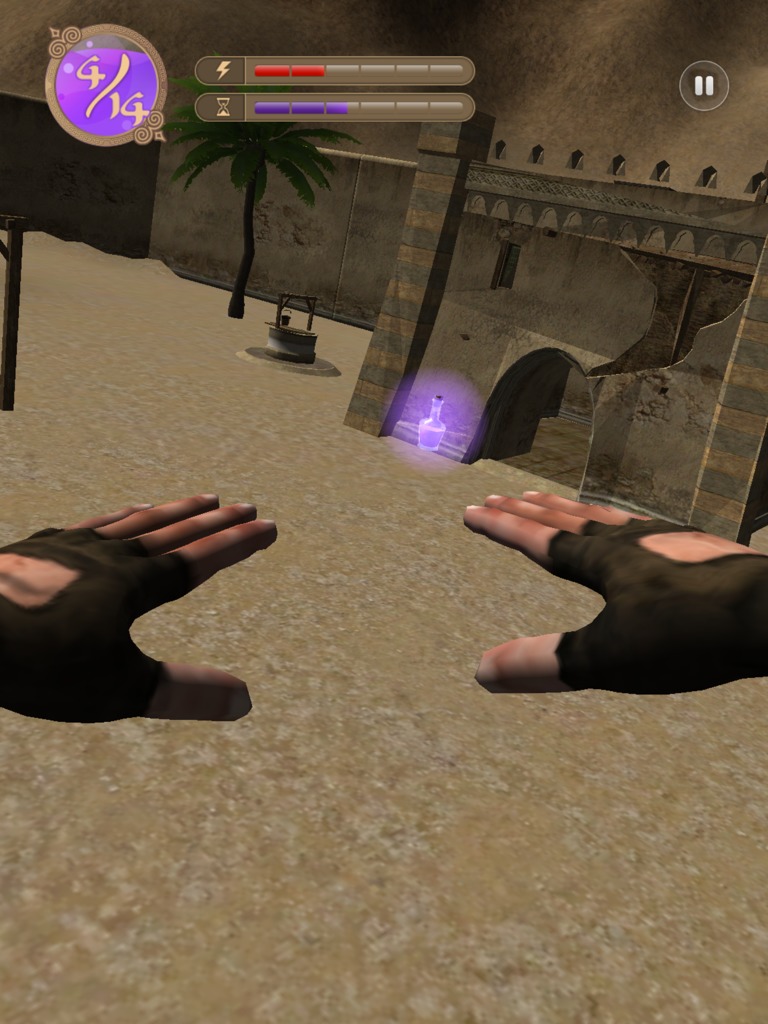 The twist is that you control your flight not by moving the device as you might expect, but with your head, as detected by your device’s front-facing camera. Tilt your head left, right, up, or down to steer in that direction, much like a flying superhero. To speed up, place your finger on the screen, and let go to slow down.

Before you start Umoove Experience each time, you must go through a bit of training that both reminds you what to do and helps the game calibrate itself. The game shows your face via your device’s camera. Once you confirm that your face is in the sensor area, you tilt your head to move an onscreen cursor to a series of targets. 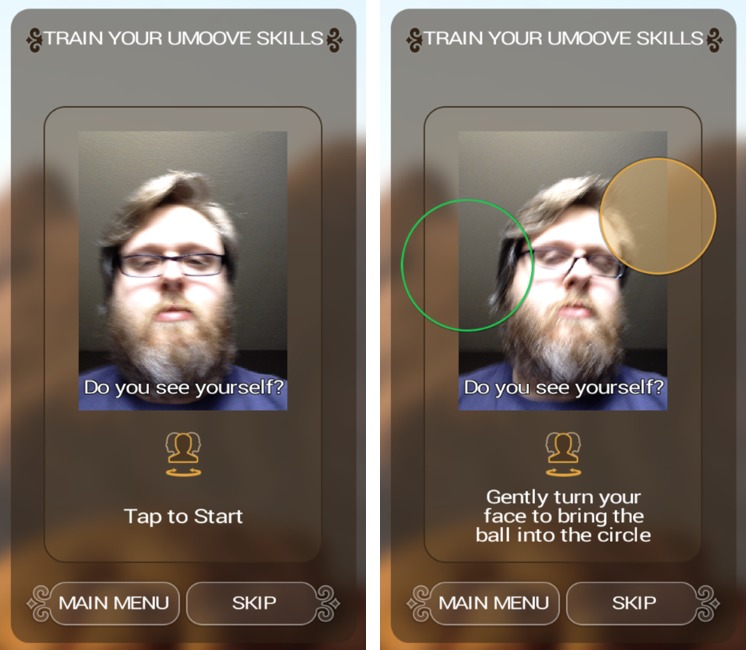 During actual gameplay, you can press the pause button in the upper-right to realign your face in the camera. This also resets your position in the air, which is handy in case you get stuck in a building. Umoove Experience is smart enough so that if it no longer detects your face, it pauses the game and gives you a chance to realign yourself.

How well does Umoove Experience work? It’s a mixed bag. For me, things begin well enough, though the controls are a bit touchy. The game starts you off facing a line of potion bottles, but I tend to veer off course before I can collect them all.

In my testing, there were two major points of failure. The first is that some directions don’t seem to register well. Aiming myself toward the ground works fine, but climbing back up doesn’t work as well. (“Pull up! Pull up!”) Fortunately, there’s no penalty for crashing into something, and you can always pause and unpause to reset your position. The second point of failure is that, after a while, Umoove Experience freaks out and my onscreen avatar flies helplessly about the screen, even though I’m keeping my iPhone perfectly still.

More generally, after only a few minutes of play, my neck starts to cramp up. Although Umoove Experience needs only small movements for input, those aren’t necessarily natural motions, and my neck muscles aren’t accustomed to the work. Plus, I find myself jerking my head around to regain control whenever the game flakes out.

Umoove Experience is clearly a proof of concept, but it holds promise for both the disabled and the mainstream gaming community. Although it could use sensitivity settings for each axis (for those whose disabilities make head movement in certain directions difficult or impossible), Umoove’s technology still works better than iOS 7’s Switch Control accessibility feature, which lets you control the interface with head movements. Whereas Umoove Experience recognizes small motions, Switch Control requires quick head flicks, making me resemble one of the Roxbury Guys from Saturday Night Live. (Cue Haddaway’s “What Is
Love.”)

For mainstream games, I’d caution developers to use head-tracking controls sparingly, and recommend that there always be an alternative control method. Rather than go whole hog like Umoove Experience, head tracking could add realistic accents, such as by invoking a “lean” command in a first-person shooter game to peek around corners.

Regardless, it’s clear that we’re moving into an age where our devices will be watching us, not in a creepy way, but more like an attentive hound, looking for commands.