Simon 3.6.1 — Dejal has released Simon 3.6 with improved compatibility with OS X 10.9 Mavericks, plus new Notification Center and History plug-ins. Additionally, the system-monitoring tool brings a rewritten Twitter plug-in (along with a Twitter Update default notifier) that works with the latest Twitter API and uses Internet Accounts from System Preferences so you don’t need to enter your Twitter credentials in Simon. The update also adds support for escaping braces (curly brackets), square brackets, and custom date/time formats in report templates, adds a MySQL default service, and considers the check frequencies for
successes and failures when calculating the Up Time percentages. A quick 3.6.1 release fixes a few minor bugs. ($49–$499 new, free update, 12 MB, release notes)

Pixelmator 3.1 — The Pixelmator image-editing app has been updated to version 3.1 (nicknamed Marble) with a couple of improvements aimed at the new Mac Pro. It adds support for 16-bit-per-channel images, and it’s able to utilize the Mac Pro’s dual graphics processors simultaneously to accelerate composition rendering for faster and more responsive performance (see this blog post for more). Pixelmator also adds MILK Print on Demand as its on-demand printing partner, enabling you
to order prints (as well as notecards, posters, and more). The update also adds a bevy of layer styles improvements, brings back a number of effects (including Pointillize, Pixelize, Mandala, Concert, and more), improves the stability of the effects rope, improves support for RAW image files, ensures that text stays visible on grouped text layers that are duplicated, and banishes the “Low disk space” message when it’s clear that your computer has ample storage space. ($29.99 new from the Mac App Store, free update, 36.7 MB, release notes)

DEVONthink and DEVONnote 2.7.3 — DEVONtechnologies has updated all three versions of DEVONthink (Personal, Pro, and Pro Office) and DEVONnote to version 2.7.3, with DEVONthink gaining support for importing items from Yojimbo. (Note that this new feature is available only if you’ve purchased DEVONthink directly from DEVONtechnologies, and not the Mac App Store.) The three editions also add filtering by date plus time, support for iWork documents
containing Quick Look previews when exported as a Web site, improve the speed and reliability of the Quick Look panel on OS X 10.8 Mountain Lion and 10.9 Mavericks, and fix an issue that caused slow indexing and importing of items dragged from the Finder to the Sorter.

Read/post comments about DEVONthink and DEVONnote 2.7.3.

Default Folder X 4.6.3 — St. Clair Software has released Default Folder X 4.6.3, which corrects a problem with the path pop-up menu disappearing in Save As dialogs on OS X 10.9 Mavericks. It also improves last-used-folder tracking to ensure that Pro Tools, Pages, InDesign, Microsoft Word, and other applications default to the correct folder when first opened. Other changes include a bug fix related to the “Open and Save to the same folder” option and a change to the SetSaveName AppleScript command so it works with UTF-8 encoded text. ($34.95 new, $10 off for TidBITS members, free update, 11.2 MB, release notes)

Intermission 1.0.3 — Rogue Amoeba has released Intermission 1.0.3, adding full support for OS X 10.9 Mavericks to the audio utility that enables you to pause and rewind up to 3 hours of live audio on your Mac. (If you’re not familiar with it, check out why Josh Centers is a fan in “FunBITS: Intermission Lets You Browse Your Mac’s Audio History,” 11 October 2013.) The update also resolves an issue where Bluetooth audio devices could cause static, improves compatibility with the Soundflower audio extension, and makes several unspecified small fixes. ($15 new with a 20
percent discount for TidBITS members, free update, 5.9 MB, release notes)

PDFpen and PDFpen Pro 6.1.3 — Smile has updated its PDFpen and PDFpenPro all-purpose PDF editing apps to version 6.1.3 with the addition of new Redaction toolbar buttons (Block Selection, Erase Selection), which you can add via View > Customize Toolbar. Both editions also receive support for clickable links from telephone numbers (as well as support for creating your own tel: links), modify the Save command to ensure that changes can’t be made to a locked document, fix a bug that caused rotation to display pages outside of the
canvas, and no longer prompt for OCR when in viewing mode. ($59.95/$99.95 new with a 20-percent discount for TidBITS members, 52.5/53.3 MB, release notes)

iTunes 11.1.4 — Apple has released iTunes 11.1.4 with a bit of a mystery. The release notes claim that this update adds the capability to view your Wish List while viewing your iTunes library. Previously, your Wish List was available only when viewing the iTunes Store, by clicking the My Wish List link on the main screen of the store. Although Apple didn’t call this out, iTunes now features a three-lined “hamburger” button at the top right corner below the search bar, and clicking it displays your Wish List. You’ll also find a list of songs that have been played through iTunes Radio here, as well as a history of
recently accessed previews. Other changes include improved support for Arabic and Hebrew localizations and the usual unspecified stability improvements. iTunes 11.1.4 is available as a direct download from Apple’s iTunes Web page or via Software Update. (Free, 222 MB) 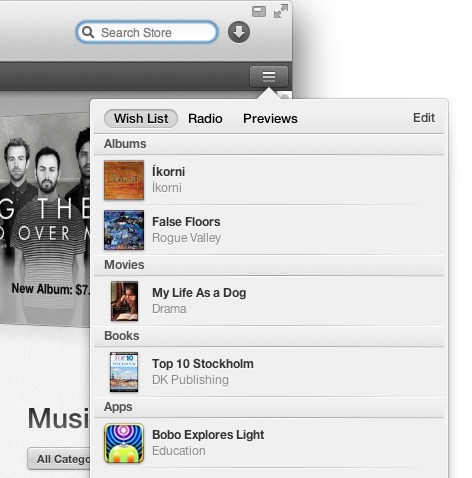 BBEdit 10.5.8 and TextWrangler 4.5.6 — Bare Bones Software has released BBEdit 10.5.8 and TextWrangler 4.5.6 with a healthy list of shared fixes for customer-submitted issues. Of particular joy for TidBITS staff, the two text editors fix several bugs that erroneously changed a document’s line endings to “Classic Mac (CR)” (identified and reported by Adam Engst and Matt Neuburg). The two updates also fix a bug where bzip2-compressed files were not read correctly, a couple of issues associated with FTP logging, and a bug in the Fortran function
scanner. BBEdit 10.5.8 also modifies the way unsaved or untitled documents use line breaks to improve compatibility when previewed using an external helper that isn’t a Web browser (such as Marked, the Markdown previewer). ($49.99 for BBEdit, free update, 12.9 MB, release notes; free for TextWrangler, 9.8 MB, release notes)

iMovie 10.0.2 — Apple has released iMovie 10.0.2 with fixes for unspecified issues that were causing the video editor to crash. The update also fixes two sharing issues: one that would cause sharing to fail outright and another where the Share button would not respond. Other changes include fixes for instances of blank project thumbnails and high-resolution images that appeared green, plus resolution of a problem where the Crop, Ken Burns, and Map features were not accessible on Macs using certain languages. iMovie 10.0.2 now requires OS X 10.9.1 Mavericks. ($14.99 new from the Mac App Store, free update, 1.94 GB)