Nintendo is in big trouble. The once-mighty video game company is facing falling revenues as its flagship Wii U console fails to inspire fans. The company is facing increasing pressure to bring its classic franchises like Mario and The Legend of Zelda to mobile devices. Nintendo is resisting that pressure, but Oceanhorn: Monster of Uncharted Seas for the iPhone and iPad ($8.99), by Finnish
studio Cornfox & Brothers gives us a peek at what a Zelda game for iOS might look like.

Oceanhorn does nothing to hide the fact that it’s a Zelda knockoff. Specifically, a knockoff of The Legend of Zelda: The Wind Waker. You play a young boy who travels from island to island discovering dungeons and collecting items in a quest to defeat a world-threatening enemy. Like Link from the Zelda series, Oceanhorn’s protagonist (simply called the Kid) slashes enemies with a sword, deflects attacks with a shield, drops bombs, shoots arrows, and plays a flute. Just like in Zelda, his health is measured in hearts, which you can increase by collecting heart pieces. 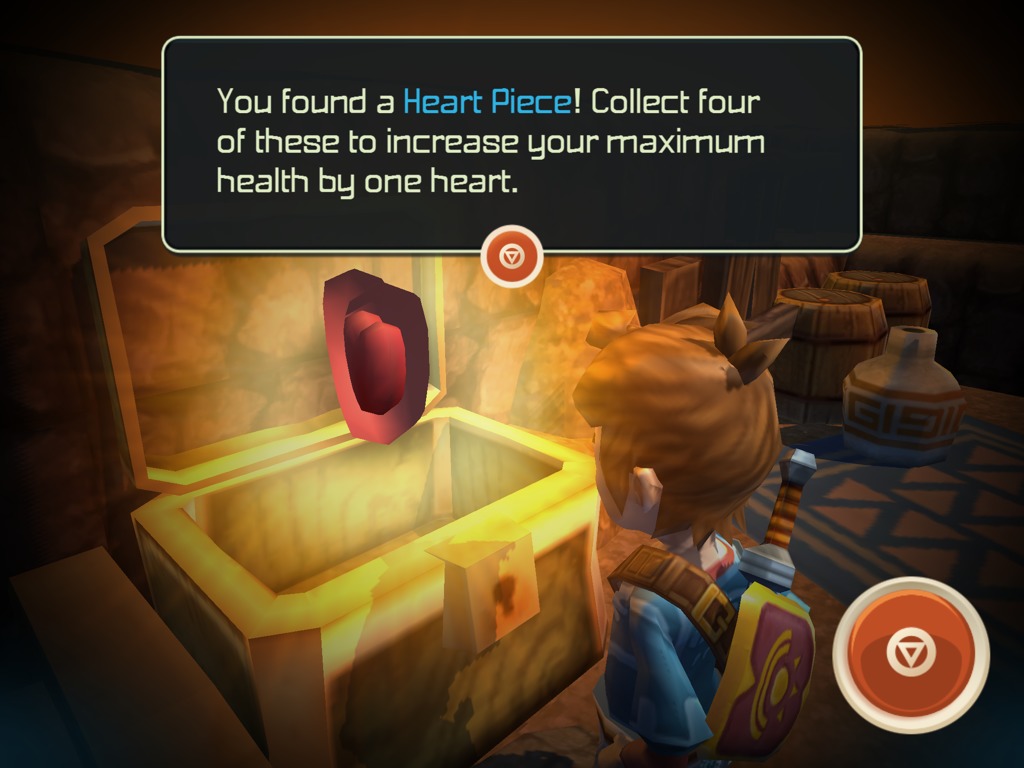 Normally, I’d be tempted to stomp all over such a shameless knockoff, but I love the Zelda games. Zelda is a contender for my favorite game franchise ever, and I’ve been playing its games since I was big enough to handle a controller. Unfortunately, they’re locked to Nintendo’s hardware, which hasn’t been worth the investment for me of late (I gave up after the DS Lite and the Wii). And frankly, many of the recent games in the series, such as Twilight Princess, Skyward Sword, and Phantom Hourglass haven’t been
fantastic (though I hear that the recent A Link Between Worlds is outstanding).

And Oceanhorn is a beautiful knockoff. The graphics would look right at home on the Wii U. Like the Zelda games, they’re simplistic, but they work. 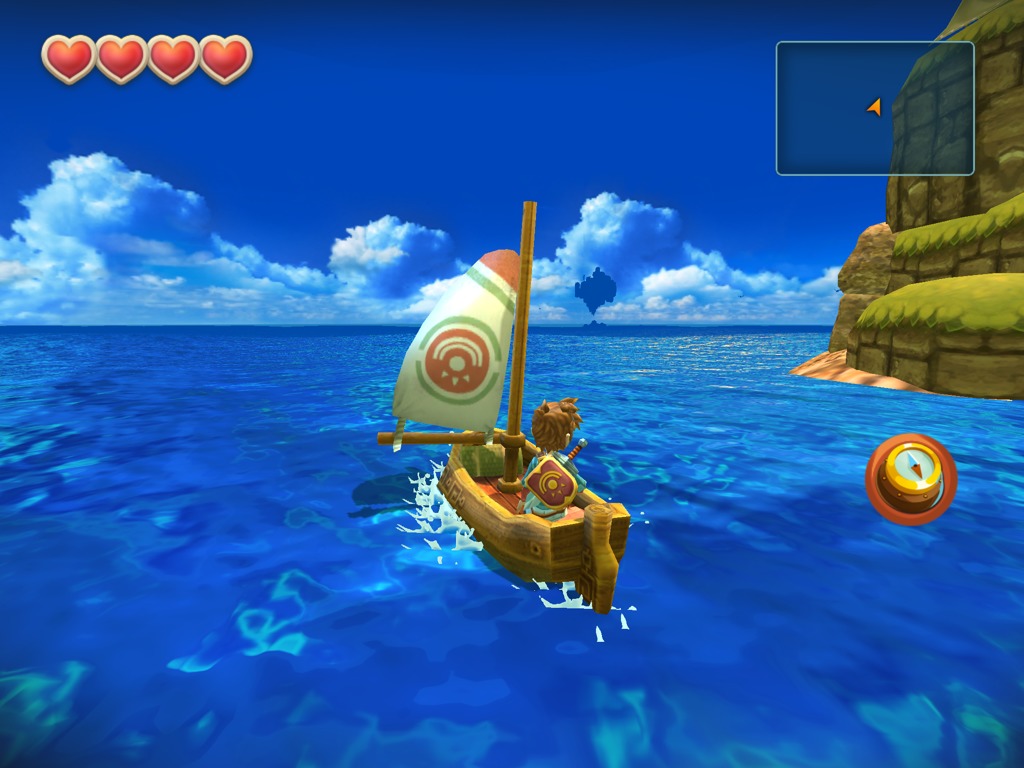 Of course, what makes or breaks a touchscreen game is its controls. Oceanhorn’s controls are competent, but don’t take great advantage of the touchscreen. You drag your thumb on one side of the screen and perform actions with onscreen buttons on the other side. This scheme works well most of the time, though it’s sometimes inaccurate. But Oceanhorn doesn’t do anything that couldn’t be done better with a traditional game controller.

As an iOS adventure game, Oceanhorn is great. And for $8.99, it’s a fraction of the price of a new Zelda game. But Oceanhorn borrows so many elements from Zelda that it demands comparison, and that’s where it falls flat.

Combat is annoying. Oceanhorn’s developers made a classic mistake, one that Nintendo made long ago with Zelda II: The Adventure of Link (which is completely unlike the rest of the series) — the sword is too darn short. You won’t notice while slaying generic beetles, but when you fight trolls, who swing far-reaching war hammers, it becomes apparent. Suddenly, you forget the sword and start chucking bombs and looking around to find jars and other things to hurl. It feels less like a hack-and-slash adventure and more like a bar fight. 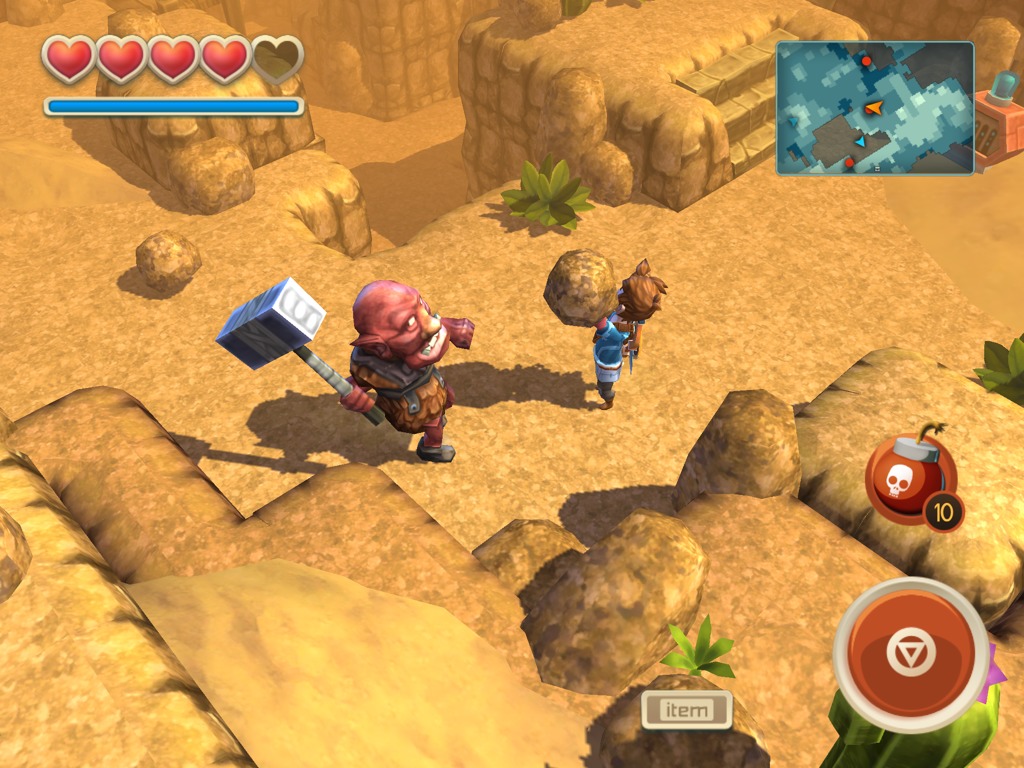 The combat in Zelda games revolves almost exclusively around sword, shield, and bow (or maybe a slingshot). Magic and bombs are mostly reserved for getting past obstacles and discovering secrets. But in Oceanhorn, magic and bombs are mainstays, since the sword is too short and it’s hard to switch smoothly to the shield. Worse, enemy strength is inconsistent. Sometimes it takes two swings to kill a particular enemy; other times five. If you’re going to copy Zelda verbatim, you need to get the details right.

Oceanhorn’s enemies are generic and unmemorable, as are its dungeons. And the dungeons are confusing. The layouts are organic and messy, and part of the challenge is often just trying to figure out the path from point A to point B. But I didn’t feel challenged, just annoyed and kind of bored.

I realize I sound negative here, but that’s less Oceanhorn’s fault as a standalone game than how it compares to the Zelda games. For $8.99, it’s a pretty good knockoff you can play on your iPad or iPhone.

If not for the existence of Zelda, Oceanhorn would be a fantastic game on any platform. Oceanhorn’s flaws don’t reflect poorly on its developers as much as show how good Nintendo can be. I’ve always thought of Nintendo and Apple as kindred spirits. At their best, they both design innovative, sleek hardware and develop elegant, detailed software. At their worst, they release underpowered, gimmicky hardware, let their best software stagnate, and stubbornly cling to bizarre, proprietary technologies that are universally loathed.

So is Oceanhorn lighting the path Nintendo should travel? Many think so, and I would love to play Nintendo classics on my iOS device, but I think this suggestion misses the problem. Nintendo isn’t struggling in the handheld space — it’s thriving, thanks to the 3DS (though the 3DS had a rough start due to expensive hardware and a lack of games). Nintendo’s problem is that it can’t compete with Sony and Microsoft in the living room. The GameCube and Wii U were both commercial flops, and while the Wii sold more than the Xbox 360 or PlayStation 3, it did so only because of the motion control gimmick, which quickly lost
its luster.

Some have said the Wii U can’t compete because smartphones and tablets are taking the place of consoles. That just isn’t true. In just a couple of months, the PlayStation 4 has sold over 4.2 million units worldwide, while the Xbox One has sold over 3 million. And the PlayStation 4 hasn’t even been released in Japan yet, where it’s guaranteed to be a smash hit. Meanwhile, the Wii U has only sold 2.8 million units in the past year. Consoles are doing better than ever; it’s just that people don’t want what Nintendo’s
selling.

The other fear is that if Nintendo leaves the hardware business, it will turn out like Sega and Atari, who both abandoned hardware to focus on multi-platform game development, only to become marginalized.

At TechCrunch, MG Siegler offered a more original idea for Nintendo: to release a $99 console focused on retro games. That’s a neat idea, and would make Nintendo a fortune, but as Siegler says, the company is too proud and stubborn to do something so obvious.

I think Siegler’s on the right track, but he’s also throwing the baby out with the bathwater. The Wii U has many problems, but three are at the core of the situation:

Before Nintendo can address these problems, it’s going to have to follow in the footsteps of Sony and swallow some humble pie. When the PlayStation 3 debuted, it cost a whopping $600 and featured exotic hardware that was difficult to work with. As a result, it struggled against the Xbox 360. So with the PlayStation 4, Sony did something unthinkable: it hired an American software designer to develop it. The result was a cheaper, more powerful machine that developers love, and, most importantly, is flying off the shelves.

If there’s one thing Nintendo excels at, it’s taking a mediocre product and turning it into a hit. The chunky Nintendo DS became the svelte and stylish DS Lite. The funky and under-appreciated GameCube became the blockbuster Wii. And most recently, the flagging 3DS became the affordable, kid-friendly 2DS and the premium, big-screen 3DS XL.

I think Nintendo could pull off the same maneuver with the Wii U, though it would take some radical changes.

These suggestions won’t fix all of Nintendo’s living room problems, but they would go a long way toward luring customers and developers back to Nintendo, especially if the company can get the Nintendo HD’s price under $200.

But, in the all too likely event that Nintendo isn’t listening to me, the smart thing for developers like Cornfox & Brothers to do is to work on polishing Oceanhorn into a spectacular sequel. Whether Nintendo’s future is in its own hardware or someone else’s, the company’s most valuable commodity is its classic franchises. If Nintendo doesn’t figure things out fast, it risks more nimble developers successfully emulating the magic of the company’s crown jewels.