Lots of people love to hate iTunes, and many of them hanker for a “slimmer, lighter” alternative. I discussed the question of iTunes bloat in “Is iTunes Bloated?” (27 September 2010), so I won’t get into that now. One result of that feeling of bloat is a string of “minimal music players” designed solely to play music, and not to contain multitudes of extra features.

The free Vox 2.0, from Coppertino, is one such app. The company touts Vox’s “beautiful intuitive minimalist interface,” and the app’s capability to play audio file formats that iTunes doesn’t handle, such as FLAC and Ogg Vorbis. The new version of Vox offers gapless playback, one of the key features missing in earlier versions, making it useful for listening to live music or operas.

You can use Vox to play music from your iTunes library, or you can drag files to its window to create playlists, and listen to music from any location on your Mac or external hard drives. While it has good intentions, I find that Vox is big on design, but not so hot on function.

First, the design. I’m not a fan of white-on-black interfaces; I find them hard to read, and I find that they clash with the white backgrounds of other windows. But I can accept that many people find this type of interface to be sleek. Here’s what the Vox player window looks like in its minimal form, and when it’s expanded to its full size. 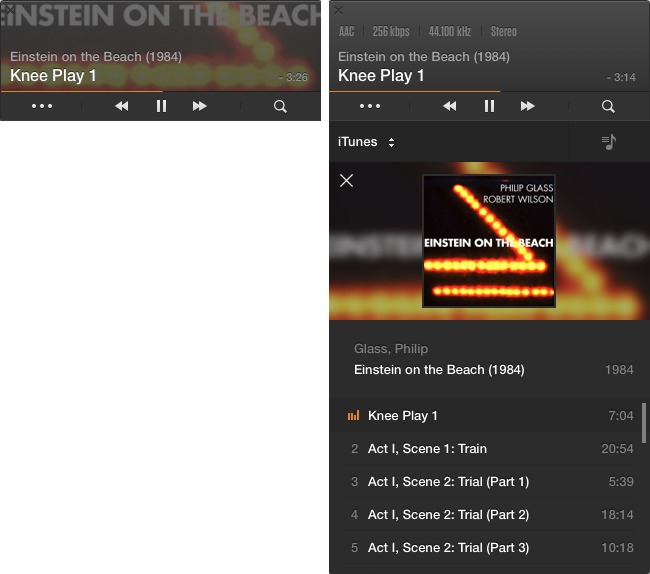 For quick access, you can set the Vox window to float over all other windows, and to stay in all Spaces — something that confuses the iTunes MiniPlayer, if you use iTunes in full-screen mode. Vox also places controls in your menu bar; a simple pause/play button, previous and next buttons, and a button to display the contents of the current album or playlist. You can also set hotkeys to play/pause, change tracks and raise or lower volume. Plus, a downloadable System Preferences pane lets you use keyboard media buttons, an Apple remote, or buttons on headphones or earbuds to control Vox as well.

Vox’s iTunes integration can be problematic, however. I tested it with two iTunes libraries. With the first, containing around 4,400 tracks, everything went smoothly. But with my main iTunes library, currently around 63,000 tracks, performance was dismal. Whenever I launch Vox with the large library, the app tells me it is “Loading iTunes,” with a tiny orange progress bar that shows just a dot. It stays like that for many minutes, then switches to a longer progress bar. It finally loads my iTunes library after about 10 minutes, using 100 percent of my CPU during all that time (out of 400 percent, for four cores). Granted, I set Vox to update my library on startup, but you have to do that if you add music to your library regularly.

And what do you get from your iTunes library? You can view only albums; Vox offers no artist or genre view to drill down in the library, though it does have a search field. In that album view, you can sort (from View > Sort iTunes Albums) by artist then album year, by artist then album title, or by album title. Although Vox’s search is fast and finds text in any portion of a track’s metadata, it’s also currently quite unstable; searching my iTunes libraries caused a number of crashes during my test.

Vox can read playlists from iTunes, so if you have a large library, it’s probably better to make lots of playlists than try and find music by other criteria (composer, genre, etc.). It can play your iTunes playlists, though it took me a while to figure out where they were hidden: behind a musical-note shaped button in the source section of the interface — and even smart playlists. But if you base smart playlists on play counts or last played date, they won’t update after you’ve played music with Vox; it can read your iTunes library, but not mark songs as played. 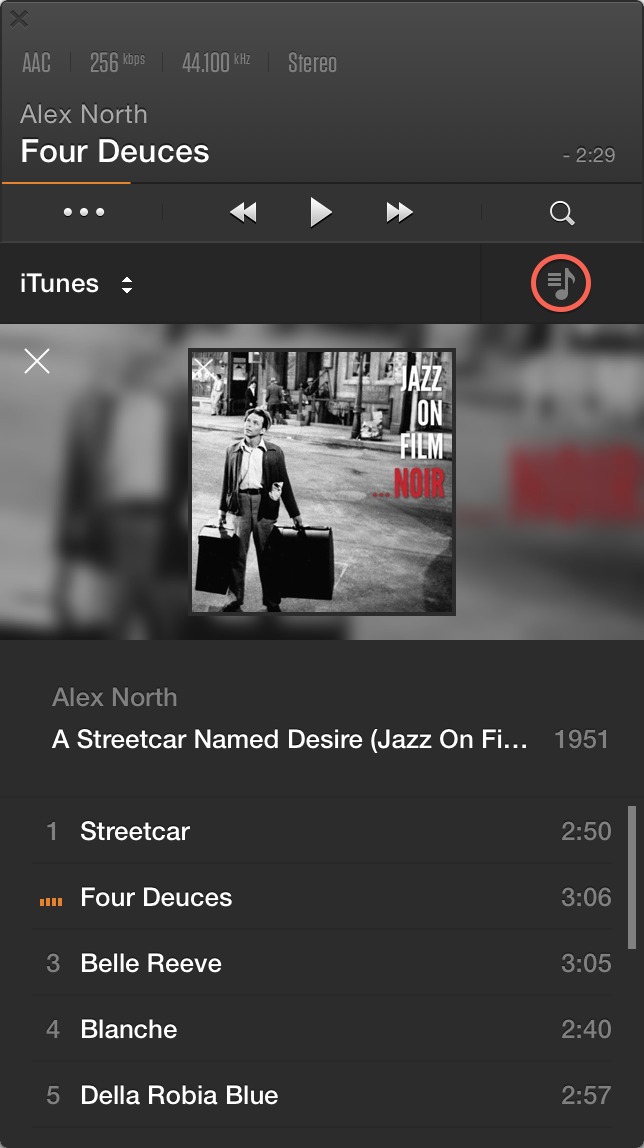 What if you use iTunes Match, Apple’s $24.99-per-year cloud service? Vox can show only files in your iTunes Media folder, so all those songs in the cloud won’t appear. If you download them via iTunes, you’ll need to reload the iTunes library, by choosing Controls > Reload iTunes Library Completely.

The app also provides notifications when tracks start playing, through Growl or Notification Center, and with the latter, the notifications are better than those from iTunes, as they feature album art. 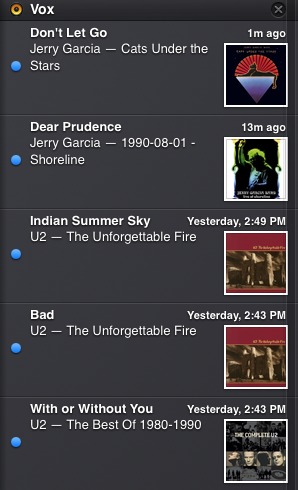 As far as playback is concerned, Vox offers a solid set of options, including gapless playback, crossfading, left/right balance, volume limit, and even a buffer size. There’s also an equalizer with presets available from the main player interface. More interesting, if not ultimately useful, is “hog mode,” which means that, if this feature is turned on, you shouldn’t hear any extraneous sounds. But I heard all the usual system beeps anyway. Similarly, Vox’s playback options also offer a checkbox for Convert Stereo to Multiple Channels, which is supposed to “convert stereophonic audio in your headphones to binaural using Bauer DSP (BS2B) technology.” I didn’t hear any difference, listening with Beyerdynamic DT 990 headphones.

So who is Vox for? Primarily people who have either small-to-medium sized iTunes libraries and are overwhelmed by all the non-audio features of iTunes, or those who keep music files organized in Finder folders. Since Vox can play FLAC files, I find it works well to play many of the live concerts I have in that format. I would love to have Vox scan the top-level folder that contains all of these files and display them hierarchically by album, but it can’t; if I add that folder to Vox, it reads all the files and puts them in a flat playlist. You can save playlists as files, then play them by double-clicking, but that becomes ponderous when you’re used to having playlists organized in an app like iTunes.

For me, with an enormous iTunes library, Vox works well only when I manually drag files to its window. In most cases, that means one song or album at a time. It surprises me that Vox doesn’t let you choose a collection of nested folders to scan; that seems like an ideal way to access music not stored in an iTunes library.

While the free Vox 2.0 has good intentions and is easy to try for those who aren’t happy with iTunes as a music player, it’s not up to the demands of listening with a serious music collection. The problems with large iTunes libraries and the limited ways of accessing music from your computer mean that it won’t be replacing iTunes for me, and it would need some improvements in these areas before I could recommend it generally.

Comments About Vox 2.0: A Minimalist Music Player that Needs Work