The Winter Olympics are back. Only once every four years do you get a chance to see people sweeping ice in front of a sliding chunk of granite (I believe beer is involved at the amateur level), Jamaicans rocketing down a bobsled track, and Nordic skiers toting rifles (well, outside of a James Bond movie anyway). There are even a few new events to check out this year, ranging from team ice skating to the biathlon mixed relay. If you haven’t decided to tune out due to Russia’s repressive laws against homosexuality, we have some suggestions to help you enjoy the games to the fullest, even if you’ve cut the cable TV cord.

Viewing the Games — The good news is that you can view all 1,000 hours of Olympic coverage via the NBC Olympics Web site or the free NBC Sports Live Extra iOS app. The bad news is that live video from the app is off limits unless you have a cable or satellite subscription from a participating provider. The Web site features limited live content for cord cutters, but to see everything, you need a paid TV subscription. (Not surprising, as NBC is owned by Kabletown… er, Comcast.)

Even if you don’t plan to watch on a computer or mobile device, the app and Web site are handy ways to keep track of results and upcoming events.

Unfortunately, for unknown reasons, the NBC Sports Live Extra app does not support AirPlay, and there’s no NBC app for the Apple TV. So if you want to watch the Olympics via Apple TV, your best bet is view them on the NBC Olympics Web site, and then use AirPlay Mirroring or AirParrot to show them on your TV. Also check out the Media Center Safari extension, which lets you AirPlay a video playing in Safari without having to mirror the entire screen — it might work better. (TidBITS members can learn how to configure Media Center in “Take Control of Apple TV, Chapter 6:
Apple TV at the Movies
,” 9 December 2013.)

If all else fails, there’s always a good old-fashioned TV antenna. Fortunately, broadcast TV has come a long way since the days of sending Dad onto the roof to adjust the antenna. Since it’s less compressed than cable or satellite signals, broadcast HD usually looks far better. And if you live in the city or suburbs, stylish, powerful antennas like the Mohu Leaf have taken the place of rabbit ears.

Alas, if you’re like me and live in the sticks, the Leaf won’t help much. I’d have to build a full-scale replica of the Eiffel Tower to pull in a signal. If you want to see what sort of antenna would work best for you, and which way to point it, AntennaWeb is the place to go.

Another alternative is Aereo, an innovative service that is driving the TV industry bonkers. It allows you to watch and record broadcast TV online, and even AirPlay content to an Apple TV. Unfortunately, it’s available only in selected markets, but if your area is included, service starts at $8 a month.

Following the Games — If you can’t watch the 2014 Winter Games live, there are still a number of other ways to follow along. NBC has the usual social media accounts: @NBCOlympics on Twitter, nbcolympics on Instagram for photos, and for those really short highlight videos, NBCOlympics on Vine.

There is an official Sochi 2014 Guide app for iPhone and iPad (free), but unfortunately, it seems as unfinished as Sochi’s accommodations. In theory, it can notify you when events begin and add events to your calendar but it crashes before I can complete setup.

Fortunately, the official Sochi 2014 Results app (free) appears to be much more stable. You can configure it to notify you of results for specific countries, athletes, and sports. It also features a built-in event schedule, which is handy. 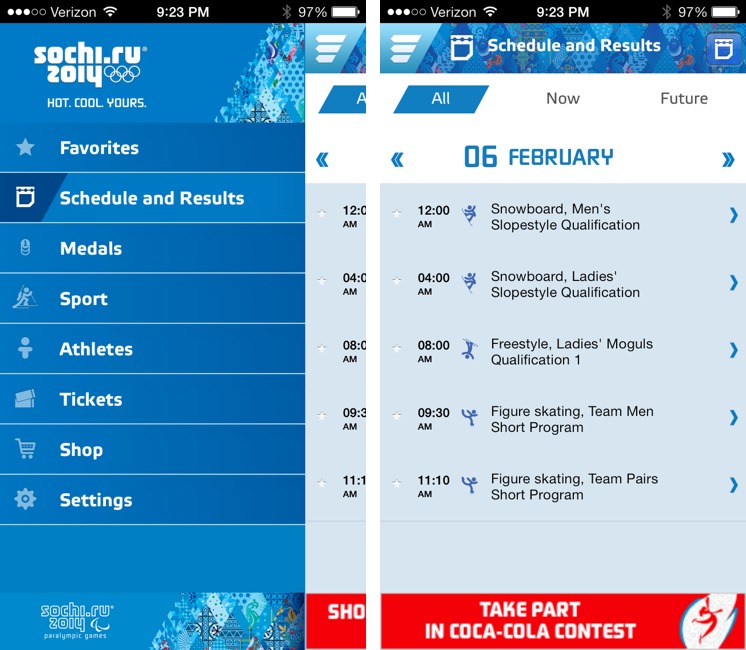 Cheer the Athletes — It’s one thing to watch your favorite athletes perform, but thanks to the wonders of technology, you can participate as well, without having to brave Sochi hotel rooms or even the cold.

The 2014 Team USA Road to Sochi app for iOS (free) features daily updates, detailed athlete bios, and links to athletes’ social media profiles. It also enables you to cheer on Team USA athletes via social media with the press of a button. It’s a slick app that works well. 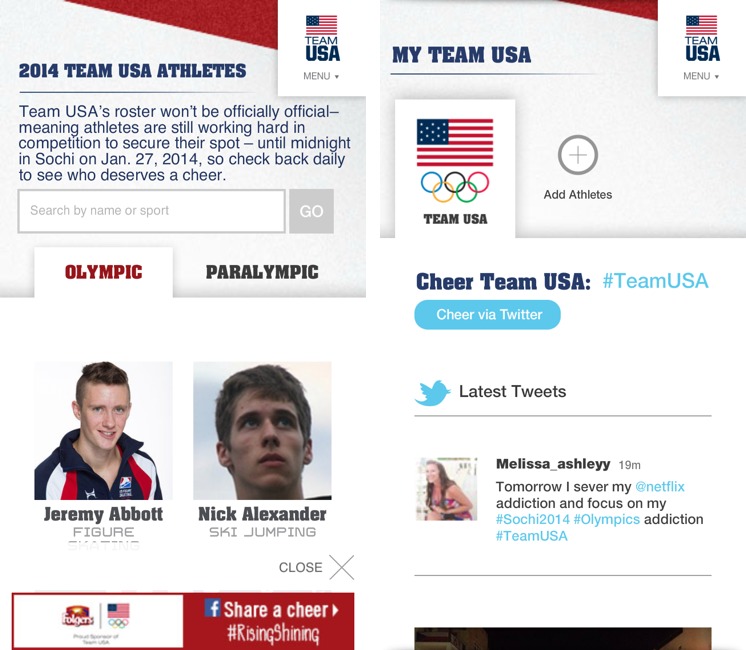 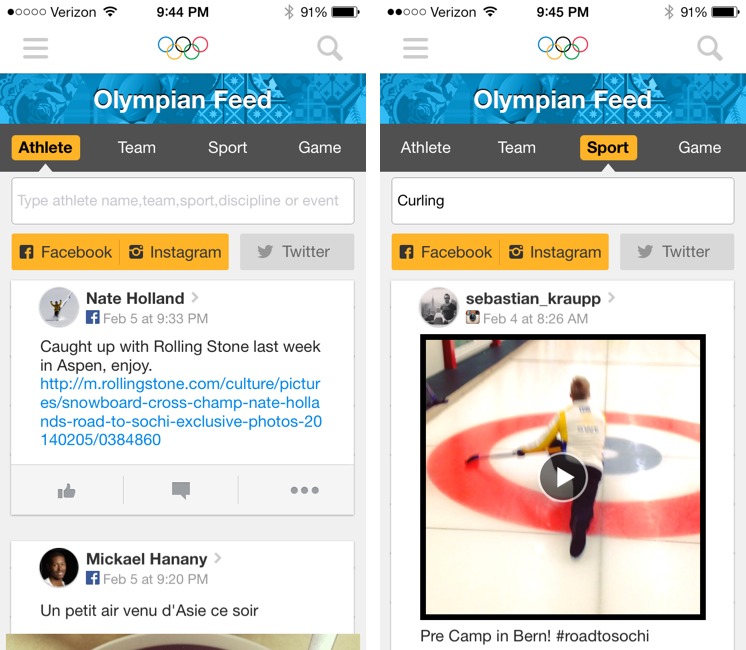 This last one is a bit cheesy. The free #ItsOurTime presented by AT&T app (yes, that’s the actual name, hashtag and all) lets you record a cheer for Team USA that will be shown off on the AT&T #ItsOurTime Web site. OK, it’s a lot cheesy.

Enjoy the Games, and if you run across additional interesting online or iOS resources for the Olympics, let us know in the comments!