It takes only a glance at Apple’s quarterly financials to realize that the era of traditional desktop and laptop computers is waning. Last quarter, Apple sold 26 million iPads, over five times more than the 4.8 million Macs shipped in that time period. And that’s with the Mac doing pretty well, growing 19 percent in the last year while global PC sales declined by 10 percent (see “Apple’s Record Q1 2014 Sales Disappoint Wall Street Again,” 27 January 2014).

The rise of the iPad has me thinking: What is the perfect mobile computer for a journalist? Or, more generally, the best device for someone who needs to write, take photos and video, and communicate with colleagues, sometimes in unpredictable, uncomfortable situations and under deadline pressure?

As a tech journalist for the St. Paul Pioneer Press, I’m in a good position to ponder this question with loaner hardware always cycling through my home office. Since I get to play with the latest and greatest, but can’t keep any of it, nor afford to buy much of it, I have to focus: what is the best use of my limited personal tech budget in the service of my journalism?

I’ve weighed that question for a quarter century in the news business, and the answer has changed in interesting ways over that time span. I even wrote a book, “The Mobile Writer,” in search of the answer.

Over the years, I’ve dabbled with many kinds of mobile computers. My tech-loaner arsenal has recently included a range of such devices – Chromebooks, the Google notebooks with a Web-centric Chrome OS based on the popular Chrome browser; Android tablets in all shapes and sizes; and Microsoft’s Surface Pro devices that are full Windows PCs as well as iPad-style tablets. I’ll be talking about some of those for future articles in this informal series looking at today’s post-PC hardware from an Apple user’s perspective. But before I reveal my current favorite for mobile productivity, a quick look back.

As a newspaper reporter fresh out of journalism school in the late 1980s, I availed myself of a machine that still is regarded with reverence in some newsrooms: a TRS-80 Model 100, a thick slab of a computer with no tilt-up screen, only a keyboard and narrow LCD panel capable of displaying a whopping eight lines of dim text. 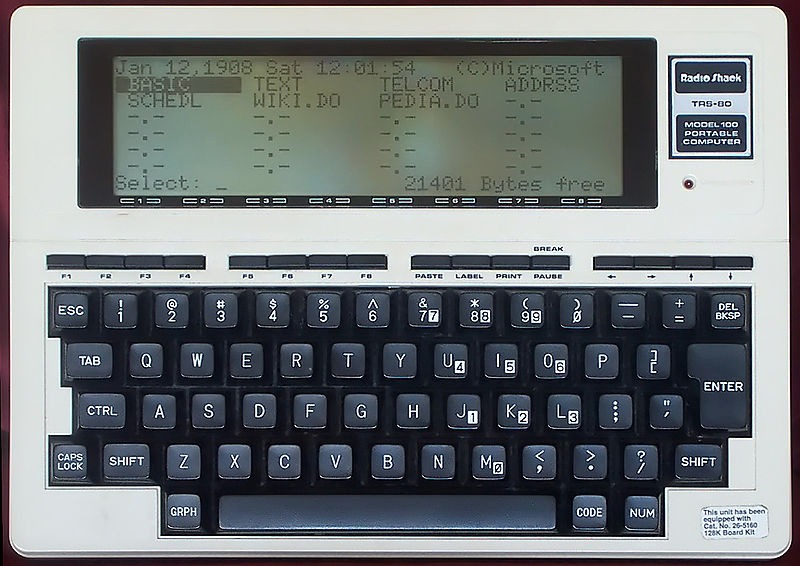 Filing a story from the field — say, at a Michael Jackson concert at the dearly departed Met Stadium in Bloomington, Minnesota — required cramming a wired-telephone handset into acoustic couplers for the painstakingly slow transmission to my newsroom.

In the years and decades hence, I experimented with a variety of other devices, including Apple’s Newton with an add-on physical keyboard; a laptop-like, translucent-green Newton cousin called the eMate 300, which I still regard as one of the most beautiful mobile computers ever produced; and a pre-Jobs-era Apple PowerBook that I rented from a computer store and detested due to its stiff keyboard. 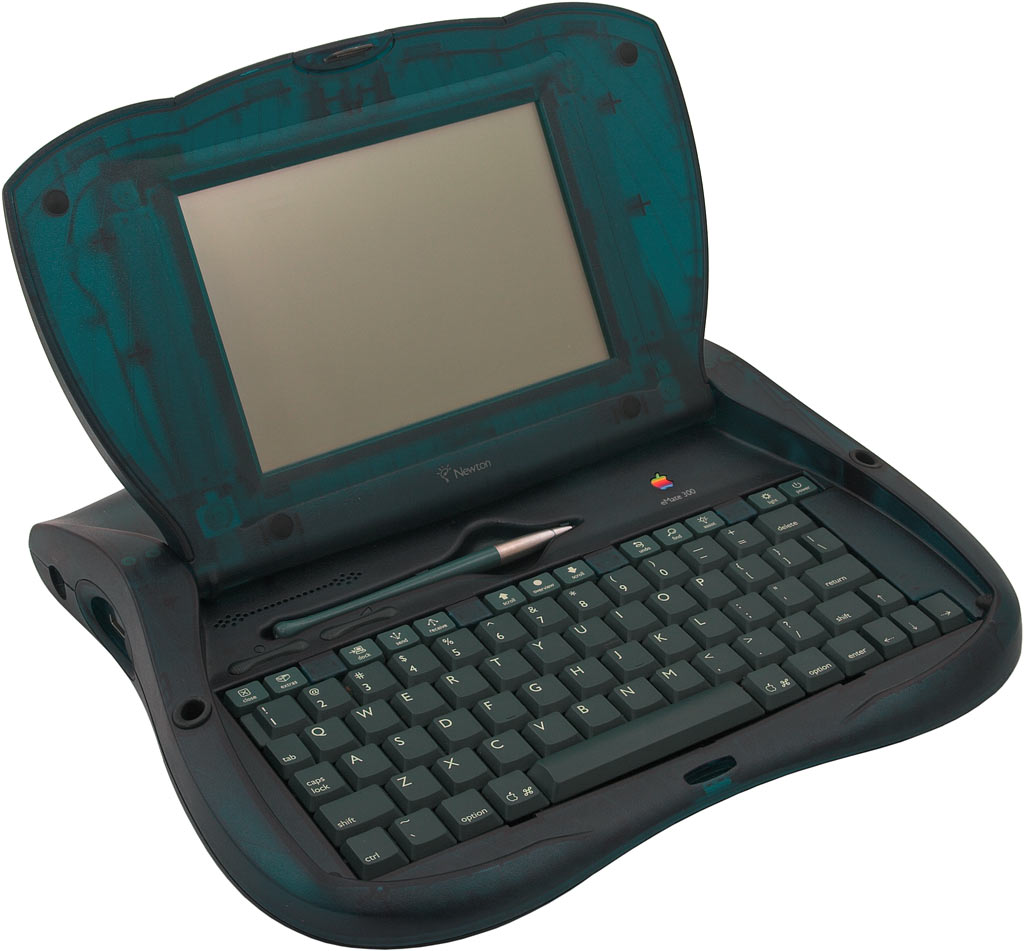 In recent weeks I’ve reached for a different kind of computer when heading out of my newsroom on a reporting assignment — the iPad Air. This came as a surprise to me. The iPad, is, at least for me, an unexpected choice for mobile journalism.

Historically, I’ve leaned more toward the Mac than the iPad. Given a hard choice between a MacBook Air and the iPad Air for personal (not professional press) use, I would choose the former every time. And yet, when I’m preparing to head out for field reporting, I’ve ended up picking an iPad almost every time.

The reasons have a good bit to do with Apple’s new “Your Verse” television commercial, which promotes the iPad Air as a primary computer, not a secondary one.

Many have seized on one iconic image in the ad, a shot of a videographer who has mounted an iPad Air on a tripod and added other video-recording accoutrements, such as a boom mike. Some have scoffed at this. Just because you’re able to harness an iPad in this way, such folks sputter, doesn’t mean you should do so with far-better video cameras available.

When I saw that image, though, I was reminded of a reporting gig in 2006 when my digital camera conked out and I had no image-capturing device other than a MacBook (one of the beloved matte-black ones). I was reduced to the awkwardness of aiming the inner-lid iSight camera at my subjects to take tech-blog photos using Photo Booth. (This was all the more embarrassing since the particular gig was the opening of an Apple store at Ridgedale Center in Minnetonka, Minnesota.) I got the hang of it after a few minutes, and sort of enjoyed it. The experience even yielded a treasured photo, taken by someone else, of me with the MacBook held aloft in the middle of the throng. 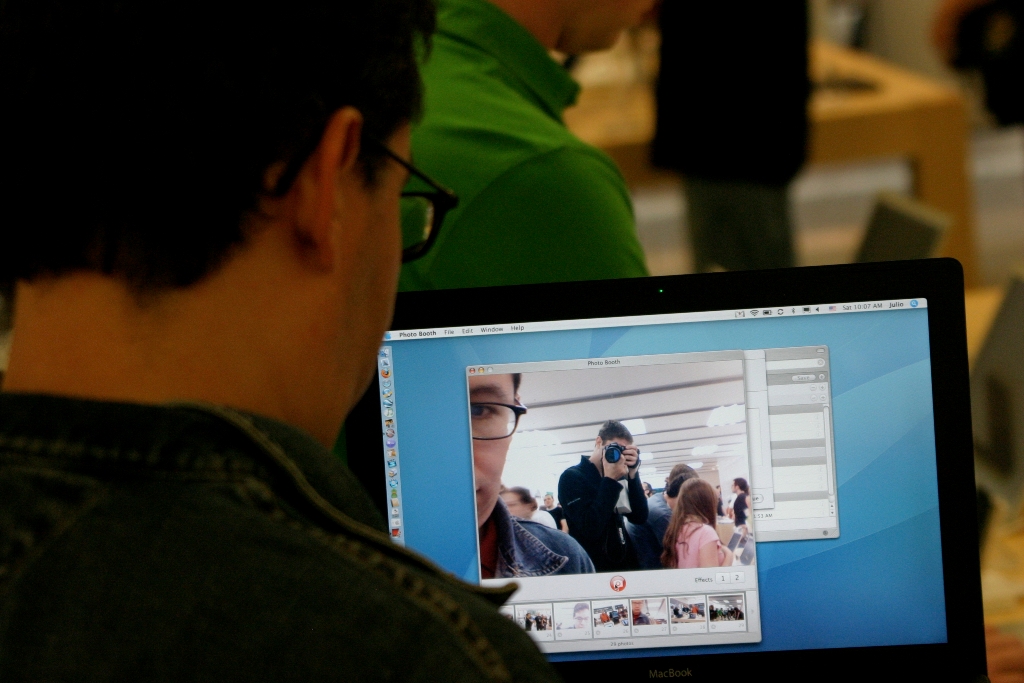 Still, it wasn’t an experience I’d care to repeat.

Fast-forward to last year, when I found myself in almost exactly the same predicament: my smartphone for blog-picture posting had failed, and I had to find a replacement camera quickly. I happened to have an iPad with me, and it did nicely. Yes, I looked and felt like a dork pointing such a big slab at my subjects to take pictures and shoot video, but it was a major step up from using a laptop with only an inner-lid camera. It was appropriate, too, since this also was an Apple-retail event – the debut of a relocated, larger Apple store in the Southdale Center mall in Edina, Minnesota.

The iPad Air isn’t just for capturing images; it also does a decent job of editing them. Apple’s iPad flavors of iPhoto and iMovie are pretty good, which makes an iPad a simple but capable mobile editing studio. A wide assortment of third-party apps augment my picture-editing capabilities (though certainly not to a Photoshop level). I have dabbled with dozens of the apps, and settled on a few gems.

For image editing, I have gravitated towards Photo Editor by Aviary, Autodesk’s PixlrExpress+, Adobe’s PS Express and Google’s Snapseed – partly because all are nifty apps, and partly because Web-app versions of these exist via my preferred desktop browser, Google’s Chrome, which creates consistency for me. Tap Tap Tap’s Camera+ is also a part of my photo-editing kit in its iPad-native flavor, since I also use the iPhone variant.

I don’t dabble as much with third-party iPad video-editing apps, but I regard Google’s YouTube Capture as essential for light editing as well as uploading.

While such photography and videography work has taken up more of my reporting time, I remain primarily the writing kind of journalist and require hardware suited for that purpose. In this regard, the iPad Air has performed splendidly when outfitted with an add-on physical keyboard.

I’ve experimented with a wide array of keyboard covers and keyboard cases for the iPad Air. I settled on Logitech’s $149.99 FabricSkin Keyboard Folio, an accessory I was sure I’d hate (a “fabric-skin keyboard”? Really?) but have come to love. 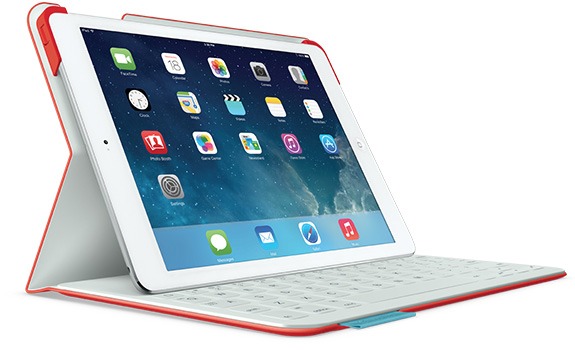 The folio-style case includes an integrated mechanical keyboard with a membrane-style protective overlay, the reason I assumed I would detest it. It turns out the keyboard has a terrific feel for touch typing, even with the membrane, and I’m delighted with it. It’s on the cramped side compared to traditional keyboards, as all iPad keyboard cases tend to be, but I’ve adapted. I like how the iPad hitches firmly to the case yet is straightforward to remove, and how the combo makes for a trim package with a pleasingly rubbery
exterior when closed for transport.

Writing apps for the iPad are legion, too, and exist in a range of categories to satisfy any goal or taste. My favorites, which emphasize online publishing and collaboration, include Evernote, Google Drive and Blogsy. I have an entire chapter devoted to these and other apps in “The Mobile Writer,” which expands on this article’s thesis that the iPad is a more-than-adequate computer for a professional
journalist or any other kind of writer.

Once fitted with the necessary add-on hardware and software, the iPad Air blended seamlessly into my reporting and writing routine. This includes typing and organizing interview notes via Evernote, and writing and filing stories via Google Drive. Since versions of these apps exist for virtually all other computing platforms, I often found myself bouncing from device to device — Chromebooks, Android tablets, Surface computers, Windows PCs, my beloved home iMac — without losing focus on research notes and articles in progress. The iPad Air is my preferred mobile device in this regard.

The iPad is a great device for other work tasks, including social media and online research, that I won’t detail here. Suffice it to say the iPad stands up well to the MacBook Air in most respects — albeit with a very different user experience — and it rarely feels like a compromised device.

I found myself unexpectedly on deadline while driving one day, and rushed into a Caribou Coffee to work. I flipped open the iPad case, fired up Skype to do interviews via my Apple EarPods as I tapped out notes in Evernote (while appreciating how quiet the membrane-clad keyboard is). I then launched Google Drive to pound out my copy and clicked the Share button to invite my editor to join the editing session via his desktop PC at the office. It all felt perfectly natural.

On another occasion, I attended a pair of events over the course of an evening with the iPad Air at my side. First, I live-tweeted Ignite Minneapolis, an evening of five-minute-long speeches on a broad array of topics in a grand auditorium. On that night, I availed myself of a different, also-awesome keyboard case from Belkin, the Qode Ultimate Wireless Keyboard and Case (for the full TidBITS review, see “Belkin Ultimate Keyboard Case Makes iPad Air a Fair Travel Computer,” 11 December 2013). Either the Logitech or the Belkin case works
well on a lap. 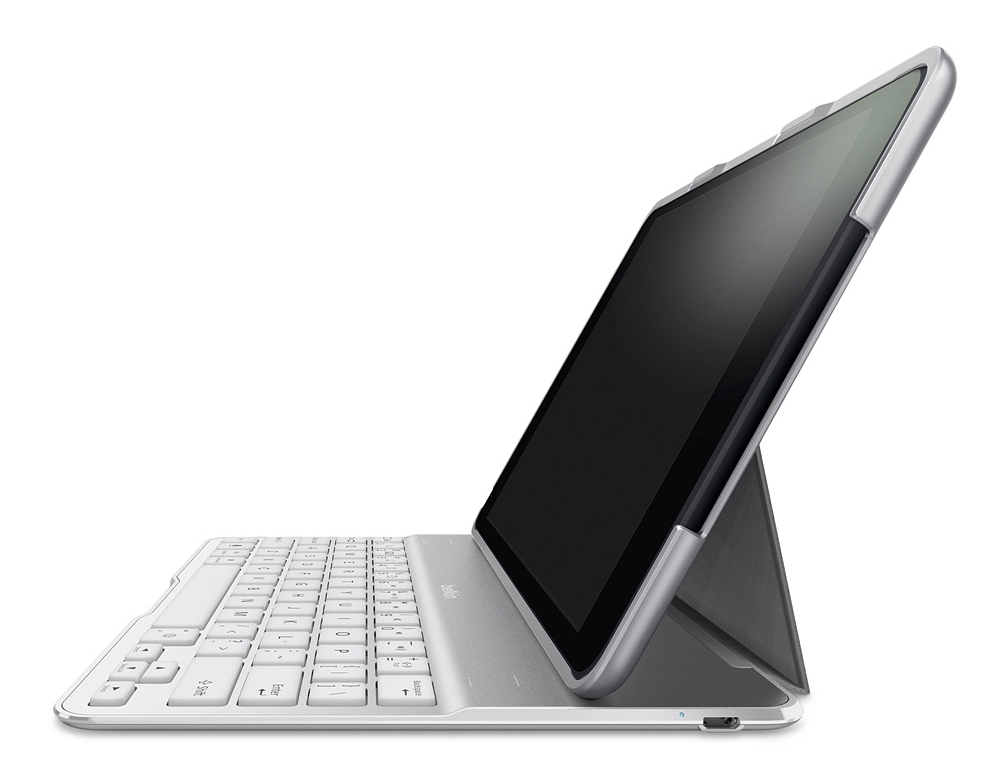 Later that night, I arrived at Microsoft’s only retail store in Minnesota, at the vast Mall of America in Bloomington, to see gaming fanatics get their hands on the new Xbox One console for the first time. This session was more about shooting photos than writing, with the iPad as my primary picture-taking and image-editing device, and the means for uploading my pictures via Google’s Google+ app. Shoot, edit, upload – I repeated the
sequence again and again as I wandered around the packed store. 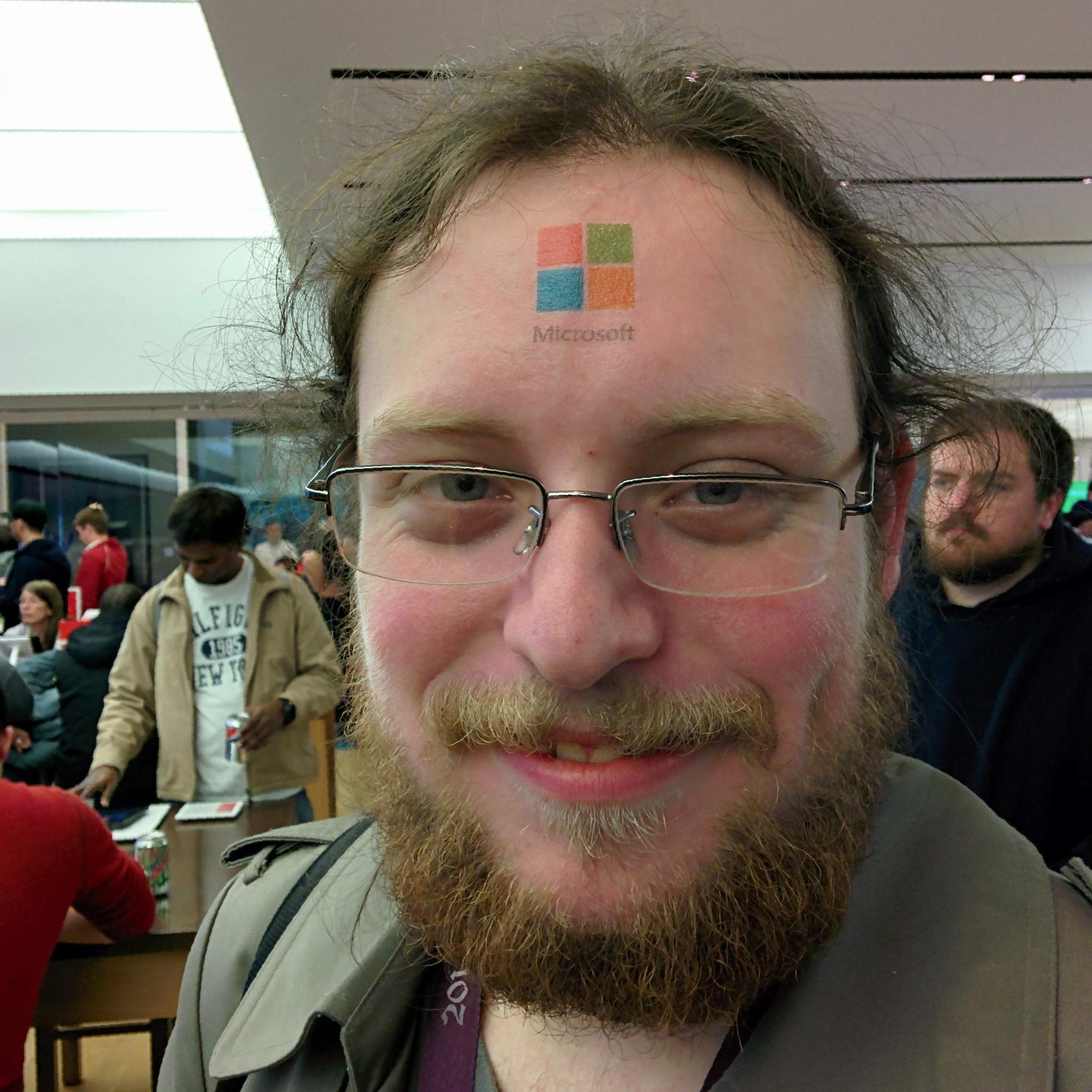 In the pre-iPad days, an Apple laptop would have been my device of choice for all of these mobile reporting scenarios, but I’d never pick a MacBook Air over the iPad Air today.

The iPad Air is smaller and lighter than the MacBook Air, even when inside the Logitech keyboard case, and it is less expensive, too – though perhaps not by much in certain scenarios. Between needing one of the cellular-capable models for filing stories while out and about, and wanting enough storage for video, I could be looking at $829 for the 64 GB iPad Air plus $150 for the Logitech FabricSkin Keyboard Folio, bringing the total cost to $979 – just under the $999 price of the 11-inch MacBook Air.

That’s why I’ll stick with the loaner iPad from work for now (while I have it) rather than invest in one of my own. But fellow writers with bucks to spare should shake off the preconception that a laptop is the only way to go for on-the-go journalism, and give the iPad Air serious consideration. It is the do-it-all mobile-reporting computer.

Comments About iPad Versus MacBook for the Mobile Writer