Despite a streak of good luck so far this winter, it finally happened. I’ve been laid out on the couch by some mid-level pathogen and am doped up on DayQuil. So what better time to tell you about the game Threes by Sirvo LLC, a stylish iOS puzzle game that costs only $1.99, with no in-app purchase shenanigans.

As you might guess from the name, Threes is a math puzzler, the object being to create as many multiples of three as possible before the 4-by-4 grid fills up. You do this by moving numbered tiles around the grid, pushing matching multiples of three together to form larger numbers. So you’d combine two threes to make a six, two sixes to make a twelve, and so on. 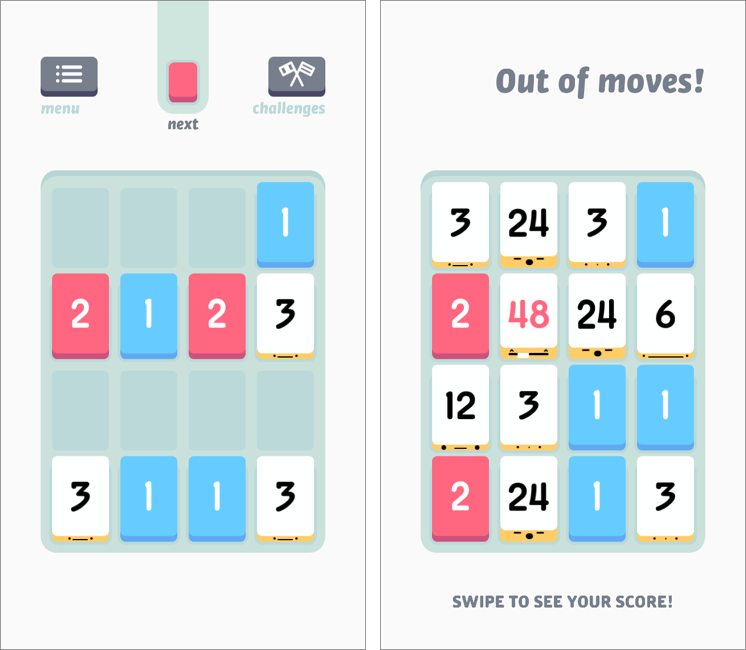 The twist is, you don’t move just single tiles. Instead, you’re forced to move all of the tiles that aren’t blocked by an edge or a non-matching tile. That means you have to trap a tile against an edge before adding another matching number to it. At the same time, you have to be aware of everything else you’re moving. To add to the puzzle, every time you slide the tiles, a new one is added to the board on the opposite end of where you move the tiles. You’re given a clue as to what’s coming, so you have to try to drop in new tiles in
strategic places.

To make matters more complicated, not every tile is a multiple of three. You also have ones and twos, which must be added together to make threes. If not carefully managed, these otherwise-useless tiles will clog up your board, so you want to focus on turning them into threes as soon as possible.

Confused? Don’t be. Threes is simpler to play than to describe, and the game walks you through the rules. It’s a game that’s easy to learn, but hard to master. Fortunately, there’s no time limit, and I advise thinking through every move carefully. You can also drag tiles slowly to get an idea of what will move without making a commitment.

Threes’ developers have infused what might be an otherwise bland game with a lot of personality. The soundtrack is phenomenal, the game board uses a well-designed mix of pastels, and the numbers even talk to you as you move them around. Yes, each number tile has its own face and quirky personality, uttering quick words at you as you move them around the board like, “Hey,” “Sup,” and “I’m bored.” Larger numbers even have their own names and bios. 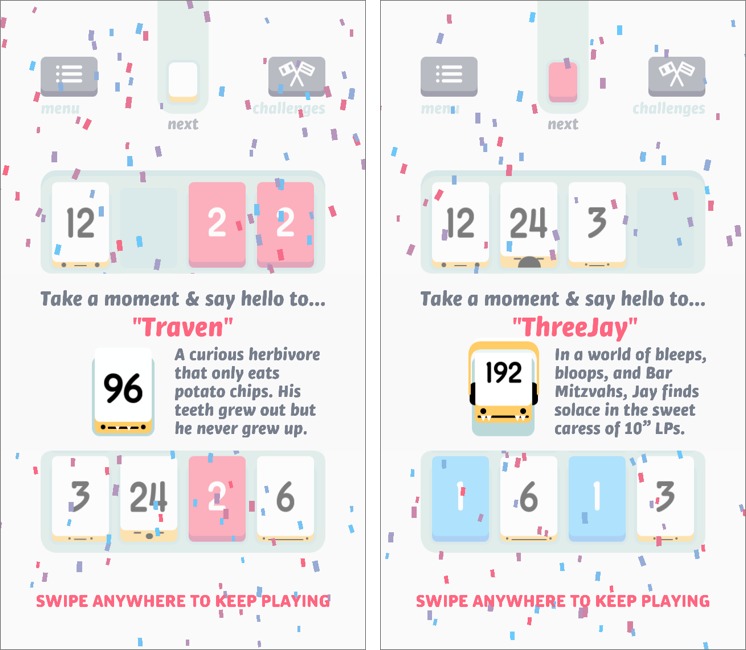 Threes might seem like a simple game, but appearances are deceiving. Behind the game is a trio of gaming geniuses: designer Asher Vollmer, formerly of thatgamecompany, which created the gorgeous Flower and Journey for the PlayStation 3; illustrator Greg Wohlwend of Ridiculous Fishing
and Hundreds; and musician Jimmy Hinson, who worked on Call of Duty: Black Ops 2 and Mass Effect 2. Even with that level of talent, Threes took a year to produce. Minimalism is much harder than it looks.

So, for $1.99, Threes provides a well-crafted puzzler that’s fun even for math-challenged folks like myself. Now if you’ll excuse me, I’m going to have another shot of DayQuil and sink back into the couch.