Dutch developer Vlambeer is releasing a new game, Luftrausers for Mac, on 18 March 2014, so I thought it would be a good time to take a look back at their breakout hit from last year, Ridiculous Fishing ($2.99) for iPhone and iPad. That simple, silly game was a critical and commercial hit, scoring an Apple Design Award in 2013.

Here’s how it works. You play Billy, a redneck sitting in a boat on the ocean. You tap the screen to cast a line, which you then take control of. Tilt your device to navigate the hook around fish. When you snag a fish or run out of line, Billy starts reeling it back in, at which point your goal is to pick up as many fish as you can before he finishes. To capture the most fish on the way back up, the trick is to get your hook as far down in the water as you can.

Simple enough, but once you’ve reeled in your catch, the ridiculous aspect comes into play: Billy flings the fish in the air and you have to shoot them down (notably more difficult than shooting fish in a barrel). The more fish you hit, the more money you make, which you can use to upgrade your line length and buy better weapons like shotguns and machine guns, along with my personal favorite, the chainsaw lure, which cuts through pesky fish on the trip down. Then there are other fun items like the bowling ball, which lets you cast your lure deeper in the ocean, and the top hat, which grows as you store money in it. 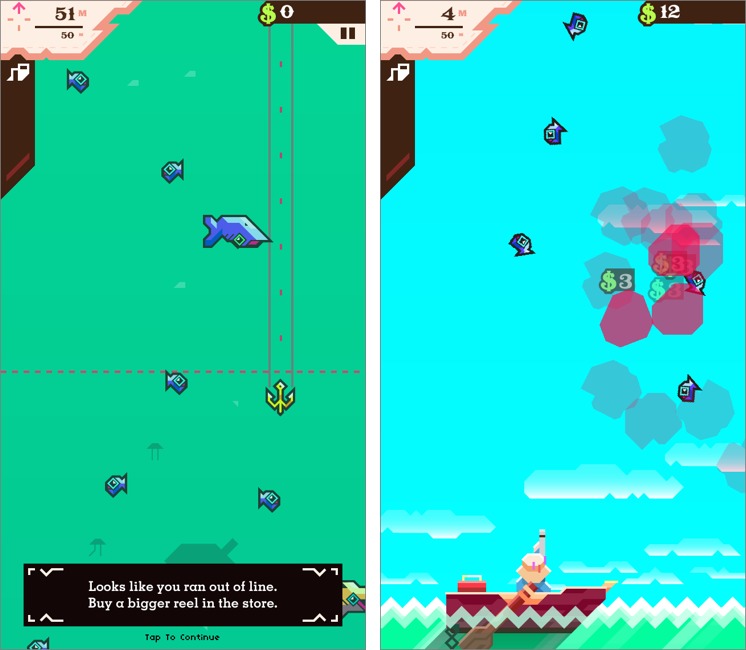 Ridiculous Fishing offers four levels, and to advance to the next, you must capture each type of fish — such as the Jim, Green Thing, Squid Father, and Footstache — in the current level. To do so, you need to snake your line all the way down to the ocean floor, which means continuously catching and shooting fish to raise enough money to buy line upgrades. However, avoid shooting jellyfish, as they detract from your earnings.

Ridiculous Fishing’s great graphic design and music make what might be an otherwise mundane game shine. The gameplay, though occasionally frustrating (crowded oceans are annoying when you just need one particular type of fish), always feels spot on. Best of all, there are no in-app purchases.

So, if you haven’t played it already, give Ridiculous Fishing a try. Meanwhile, I’m eagerly awaiting Luftrausers, which promises frantic dogfighting fun. In the meantime, you can play the free Web version.

Comments About FunBITS: Ridiculous Fishing for iPhone and iPad