Most to-do apps suffer from the same problem, which is that there are far more things you could — and would like to — do than there are hours in a day. For me, that means that the vast majority of items on my to-do list merely slouch around at the bottom, mocking me forever with their un-doneness. But juggling my task list in my head doesn’t mean I’m ineffective — TidBITS comes out each week, Take Control books get published, the business keeps running — and while I’m not always as timely as I’d like, I don’t believe I’m disappointing people through utter inaction.

That said, I’ve run across a particular iPhone to-do app — the $1.99 Recur from Grailr — that turns the concept of a to-do list on its head in surprising and compelling way, so much so that Recur has earned one of the coveted spots on the home screen of my iPhone. (Although Recur works on the iPad, it’s truly an iPhone app, and merely scales itself up for the iPad screen. Before you ask, no, there’s no syncing of data between copies of the app.)

Standard to-do lists are aspirational — they hold things you must do, should do, or would like to do, along with those jobs you don’t want to do at all, but feel you shouldn’t forget. Grailr ignored such fanciful flights of future possibility, and instead designed Recur to support those repetitive tasks and activities that underpin our lives. (To be fair, the company has another app, the $1.99 CARROT To-Do, that’s more of a traditional to-do app, albeit one with a sadistic personality that rewards you for completing tasks and gets upset with you for slacking off.)

More specifically, Recur helps you focus on those things that you may not think to do on your own or that aren’t better handled by a calendar app. You probably don’t need to be reminded to make dinner or brush your teeth, since hunger pangs make it hard to forget eating, and something like brushing your teeth is easy to turn into a nightly habit. And while date-related tasks like taking out the recycling every other Wednesday night need tracking, they’re what apps like Calendar and BusyCal are designed to handle.

But what about watering houseplants, which should be done every week, doing some physical therapy for an injury every day or two, or just working out a few times per week? All of these need to happen regularly, so putting them on a traditional to-do list would likely involve a lot of interaction and clutter, and since they don’t need to be completed on a highly specific schedule, a calendar program would just be annoying. And yet, you want to know which of these activities you should do at any given point, it’s useful to have a small amount of nagging, and it’s nice to get a sense of completion in the short term and accomplishment in the long term.

Here’s my situation. I’ve been recovering from a bad case of plantar fasciitis since October 2012. I’ve finally hit the point where I can run several days per week again, but for the last 8 months, I’ve been working daily on strength and flexibility, both to aid recovery and to reduce the likelihood of injury once I’m running seriously again. I’ve built up a variety of routines, none of which needs to be done every day, but which I should rotate through. Look at the screenshots below, and I’ll explain what’s so cool about Recur. 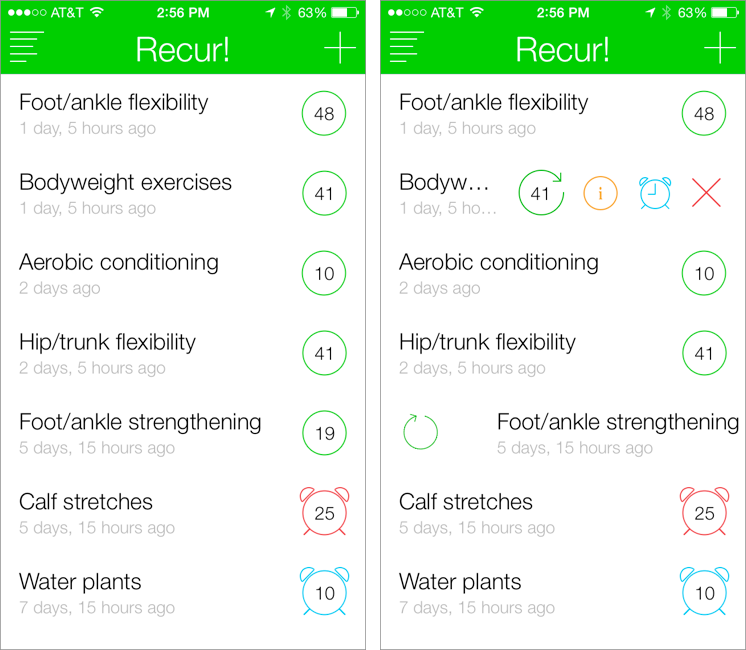 Recur has one main screen, which shows your tasks. You add a new one by tapping the + button or pulling the list down; a new task needs only a name. Once an item is created, you mark it as done by swiping to the right on its name; in the right-hand screenshot, I’m noting that I did my foot/ankle strengthening exercises. That increments the number inside the green circle so you can see how many times you’ve accomplished the task, updates the last-done date, and moves the item to the top of the list.

Tapping an item’s name reveals four buttons, as you can see in the Bodyweight Exercises line above. Here’s what they do: 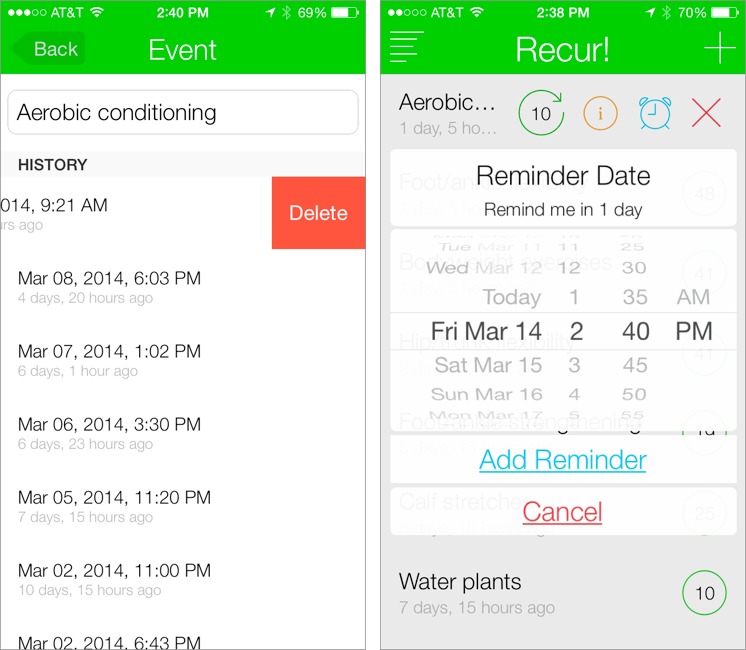 What I appreciate about Recur is that I can glance at the app in the morning and see which of my exercises are settling toward the bottom of the list and should thus receive some attention. And if I talk to a coach or therapist about what I’ve been doing, I don’t have to guess at how often I’ve done the exercises I was assigned.

I’ve tried a variety of ways of logging such information, ranging from paper to a Google Docs spreadsheet, and no system has ever stuck, thanks to being too much work, too messy, or just plain unsatisfying. I won’t pretend that using Recur is a major reward, but I do get a tiny thrill of accomplishment when recording a task as done and seeing it leap to the top of the list. And when it comes to those chores you know you should do but have trouble mustering the enthusiasm for, any little boost helps.