As I mentioned in my review of Ridiculous Fishing (see “FunBITS: Ridiculous Fishing for iPhone and iPad,” 7 March 2014), Dutch developer Vlambeer planned to release a new game on 18 March 2014. Well, they made good on their promise and Luftrausers is now available for Mac, Windows, Linux, PlayStation 3, and PlayStation Vita for $9.99 (on sale for $8.99) — watch the trailer.

In Luftrausers, you play a fighter pilot. Press the Up arrow to propel your plane, press the Left or Right arrows to spin around, and press X to fire your gun. You’re attacked from all sides by enemy fighters, jets, boats, and missiles. The goal is to shoot down as many as you can before they destroy your plane. The longer you survive, the more threats fill the screen. It’s like a cross between the classic game Asteroids and a danmaku game (“danmaku” is Japanese for “bullet curtain,” often mistranslated as the more apt “bullet hell” in the West). 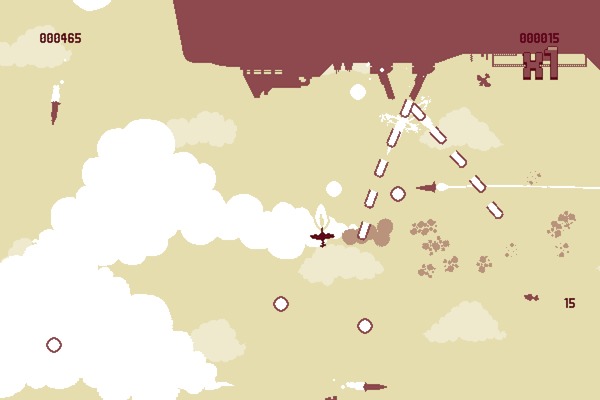 The action in Luftrausers is frantic and utterly cartoonish. For instance, your plane can dive below the water without crashing or stalling. You can lead enemy planes on a chase, only to turn 180 degrees and fire back at them. If you stop firing your gun while flying around, your plane heals itself. 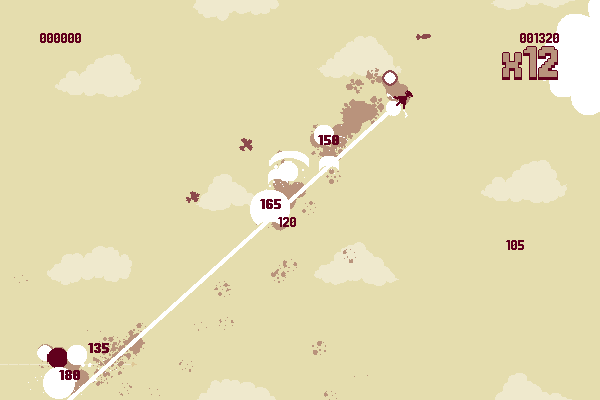 As you play, you accumulate skulls, which unlock equipment upgrades like lasers, armor, and faster engines. One of my favorite tricks is to buy armor, dive under an enemy ship, and then fly up underneath it, destroying it Superman style. 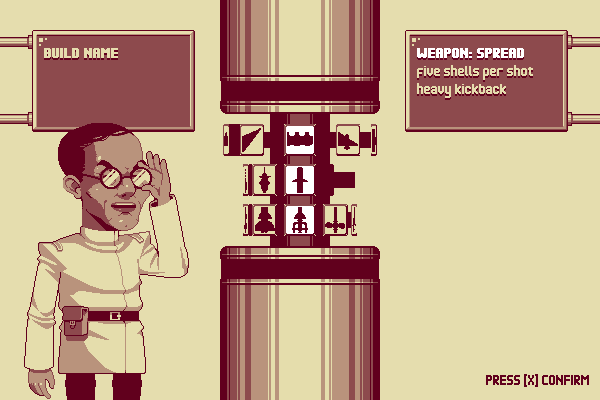 Like its predecessor, Ridiculous Fishing, Luftrausers is a simple game with retro panache. The 8-bit graphics are painted in sepia tones, interspersed with cartoon images of Teutonic-looking military officers. But perhaps the best part of the game is the music and sound effects. Atari-era static blurts against the techno-militaristic score, creating a sort of nationalistic dubstep.

I do have a couple of nits to pick with Luftrausers. First: the price is a bit steep for such a quick, casual game. I’m all in favor of supporting developers, and I understand development costs, but Luftrausers doesn’t have the depth to support a higher price. For example, FTL: Faster Than Light (see “FunBITS: FTL: Faster Than Light,” 19 July 2013) has both enough depth for hundreds of hours of play and an end goal to work toward. Luftrausers is basically a modern twist on an arcade game, and the nearly 40 quarters that it would take to buy the game is more than I could comfortably carry in my pockets. To be fair, there are no in-app purchases, so it’s actually cheaper than some
“free” games.

My other complaint is that there isn’t an iOS version. I could see myself knocking off a quick game of Luftrausers on my iPhone while killing time, but as long as it’s confined to a Mac, I doubt I’ll play it much. Since Vlambeer released their last game on iOS but not the Mac, this decision is puzzling.

If you decide to buy Luftrausers, Vlambeer offers two options: buy the game on Steam or from the Humble Store. I highly recommend the Humble Store version, as you get DRM-free copies for Mac, Windows, and Linux, plus a Steam key. Also, the Humble Store donates 10 percent of all proceeds to charities like the American Red Cross, Child’s Play, the Electronic Frontier Foundation, the World Land Trust, and charity: water. Buying from the Humble Store is a no-brainer.