For many people, an iPhone might be expensive, but harder to swallow is the high monthly fee, especially given how few phone calls many of us make these days and how expensive text messaging is for what it costs the carriers. It’s also galling to pay every month if the cellular service in the areas you frequent is terrible.

Could an iPad or iPod touch stand in for an iPhone? Not directly, since they lack the necessary radio hardware. But functionally, could you use an iPod touch or iPad with an Internet connection to make phone calls and send text messages, while eliminating or at least reducing that monthly fee?

The answer is yes, though with some qualifications. Hacking together such a system won’t be as convenient as an iPhone, in terms of software (no Phone app) and hardware (dealing with audio, and you will likely need an extra device when away from Wi-Fi). But is some inconvenience worth $600 or more per year in saved cell phone bills, particularly if you have a landline at home and work?

Getting Ubiquitous Internet Access — If you’re going to route all your phone calls across the Internet, you need Internet access. When you’re at home or work, or in specific hotspot areas like Starbucks, it’s easy to stick with Wi-Fi and pay nothing more. But if you’re trying to simulate an iPhone that you can use while commuting or traveling, you’ll need cellular data, and you’ll need to pay for it. Luckily, it can be a lot cheaper than a full-blown cell phone plan.

If you have an iPad with cellular capabilities, you’re all set — you can get Internet access via 3G or LTE when you’re out and about. (And if you haven’t yet purchased an iPad for this purpose, be sure to read Peter Cohen’s excellent carrier comparison at iMore.) But what if you have a Wi-Fi-only iPad, or an iPod touch?

The answer is a cellular-capable Wi-Fi hotspot, which connects to the Internet via 3G or LTE, and then distributes that signal via Wi-Fi to your iOS device (or even devices; many of these units support more than one simultaneous connection). The best known of these devices may be Novatel Wireless’s MiFi series, but there are a number of competing models. Like mobile phones, you generally purchase them from the carrier that will be providing the cellular connectivity, limiting consumer choice at the hardware level. Similarly, purchase prices (ranging from $0 to $50) are generally subsidized by required two-year contracts, though you can sometimes forgo the contract in exchange for a higher purchase price.

A variety of these mobile hotspots are available from AT&T (data-only plans starting at $40 per month), Verizon Wireless ($45 per month), Sprint ($35 per month), and T-Mobile ($20 per month). In each case, you can pay more per month for larger amounts of data.

As always, choosing a carrier is a balancing act between plan cost and coverage; Verizon generally has the best coverage, but also the highest prices, whereas T-Mobile is at the opposite end of the cost and coverage spectrums. The choice of mobile hotspot hardware may also factor in, but we don’t have a sense of how the devices compare; they’re all conceptually similar.

For those who want to avoid a monthly fee, there is another option. FreedomPop advertises “100% Free Mobile Phone & High Speed Internet Service,” and does deliver, selling you a mobile hotspot (using Sprint’s network) and including 500 MB of free data each month, probably enough for a few quick calls and text messages. The downside is that FreedomPop is mind-bogglingly annoying to work with, constantly trying to upsell you on additional services that come with monthly fees. Plus, the free 500 MB is available only via 4G, not 3G, which means it won’t work in many Sprint coverage areas unless you pay for the $3.99 per month Pro 500 MB plan, or the $19.99 per month Premium 2 GB plan.

Working around the Audio Problem — The iPod touch might look like an iPhone, but neither it nor the iPad were meant to be used as a phone. Yes, both feature a microphone and a speaker, but the speaker isn’t located at ear level, so you’re stuck using them as speakerphones, and they likely won’t work as well as an iPhone would, given the iPhone’s noise-cancellation capabilities that rely on dual microphones. But holding an iPad Air to your ear would just look silly, anyway. 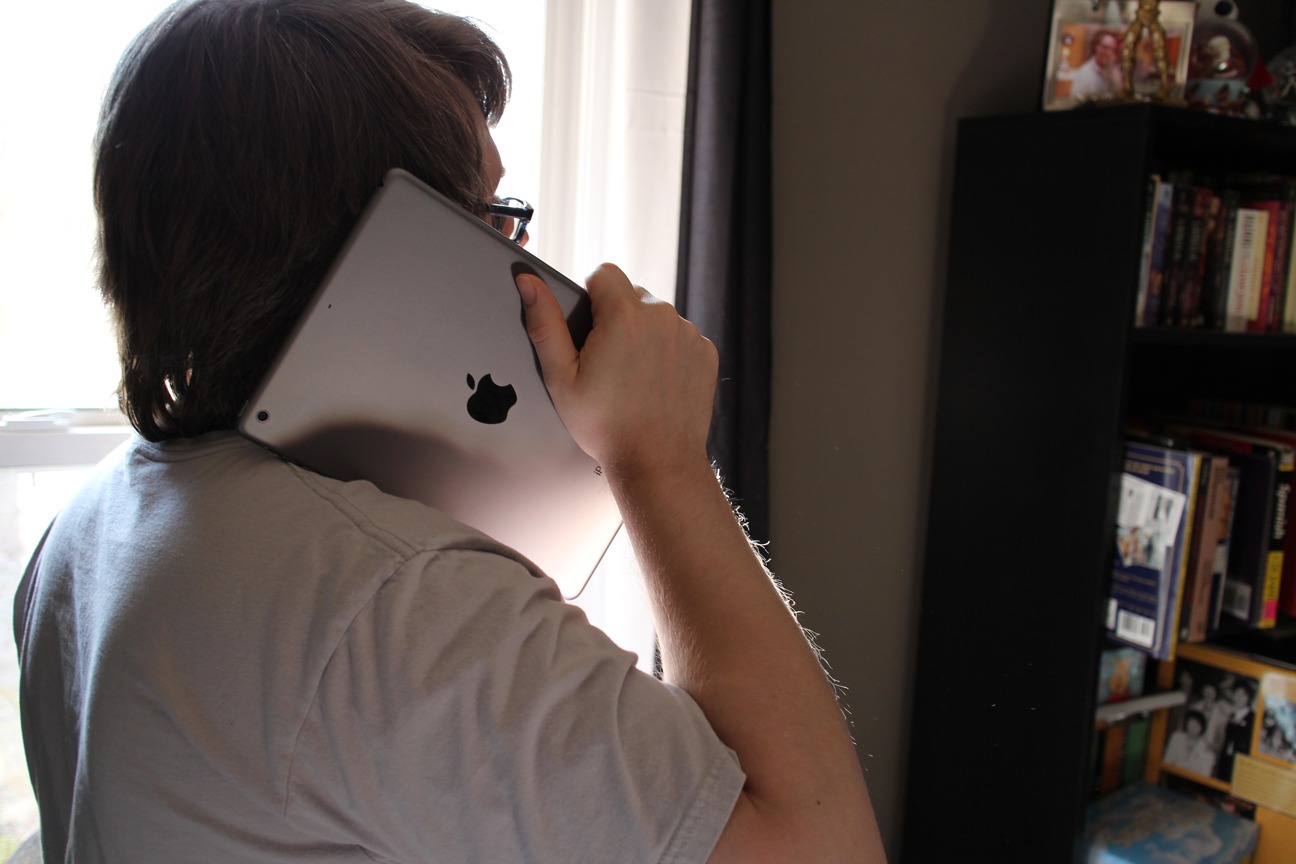 A simple workaround is to place calls with Apple’s EarPods ($29). Unfortunately, they aren’t bundled with the iPad, and the ones included with the iPod touch lack the mic and remote.

If fumbling with a wire is a pain, a more convenient solution would be to use a Bluetooth headset, which pairs nicely with an iPad or iPod touch. Put it in pairing mode, and then, on your iOS device, open Settings > Bluetooth, enable Bluetooth if necessary, and select your device from the list.

Selecting Phone/Text Software — Once you’ve figured out how you’re going to solve the Internet access and audio problems, it’s time to turn our attention to software, where there are two main free choices: Apple’s FaceTime Audio (and iMessage) and Google Hangouts with Google Voice. Apple’s software is highly integrated, but works only within the Apple ecosystem, whereas Google’s solution provides a nearly complete replacement for voice calling and text messaging.

Happily, both Apple’s and Google’s software also works on the Mac, which can be more convenient for when you’re at your desk anyway.

(There are numerous other apps nibbling around the edges of this topic that we haven’t tested, but it’s worth mentioning that we’re intentionally not discussing Skype, since it costs $5 per month for a Skype Number plus another $3 to $10 per month for a calling plan. More damning for Skype is the fact that its iOS app chews through cellular data when the app is active, but not being used in the background. That’s unacceptable for a situation where it would be standing in for the Phone app. It’s also worth noting that the Facebook Messenger app for iPhone now features user-to-user voice calls, but
it is limited to Facebook users.)

FaceTime Audio — If you and the people you talk to use iOS 7, FaceTime Audio is the easiest option for phone-free calls. It’s our favorite for audio calls to iPhone-using friends, as the quality is so good it’s like being in the same room. The downside is that you can’t use it for standard phone calls — it works only between iOS 7 devices and Macs running OS X 10.9.2 Mavericks. And before you say, “But everyone I know uses an iPhone,” think about your doctor, your bank, or any institution. They don’t.

To place a FaceTime Audio call in iOS 7, open the Contacts or FaceTime app, tap on the person you want to call, and, under the FaceTime heading, tap the phone icon. That’s it! It works like a regular phone call, only over your wireless Internet connection. 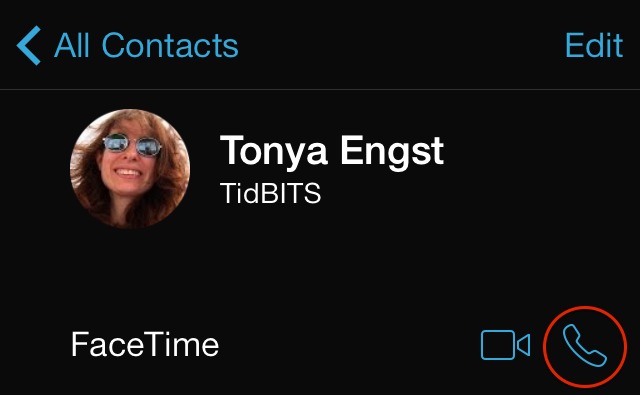 If you have OS X 10.9.2 Mavericks, you can also make and receive FaceTime Audio calls from its built-in FaceTime app. To make a call, click on a contact and then click FaceTime Audio. You can also click the Audio button for a person in the Mac versions of Contacts. 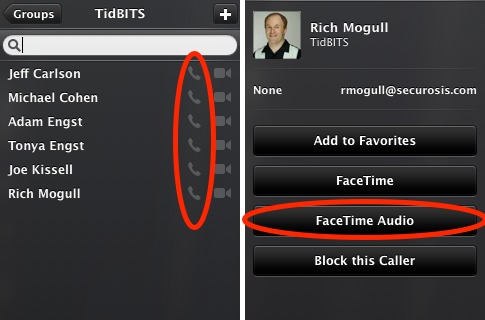 If you need to send and receive text messages, Apple has a built-in solution for that as well: iMessage within the Messages app. As with FaceTime Audio, that works only with other Apple devices. Smooth, convenient, and free, but limited.

For calling any phone in the world, or texting via old-fashioned SMS, read on to learn how to break free of the Apple-centric world.

Google Hangouts — If you’re looking for a complete mobile phone replacement, Google has you covered in a package that’s only slightly less convenient than FaceTime Audio. Google Hangouts brings video conferencing and free Internet phone calls to your iOS device. It also works on the Mac, giving you the option of using it wherever is most convenient.

To use Google Hangouts as a true phone replacement, you must first sign up for a free Google Voice phone number. Even if you don’t think you need one, it can be handy to give out to companies so you can filter out junk calls and send the rest to any phone. It also, unlike FaceTime, offers voicemail and voicemail transcription, though the latter is often hilariously inaccurate.

Once you have a Google Voice number associated with your preferred Google account, install the Hangouts app for iOS. On the Mac, you’ll need the Hangouts extension for Google’s Chrome Web browser.

Now, when someone calls your Google Voice number, the Hangouts app on all your devices will “ring,” and you can answer much as you would a normal phone call. Conveniently, answering on one device shuts up the rest.

To place a call from your iOS device, open the Hangouts app, tap Calls in the lower right, and then tap the keypad button in the upper right. You can then switch between dialing manually with the keypad or selecting someone from your contact list. 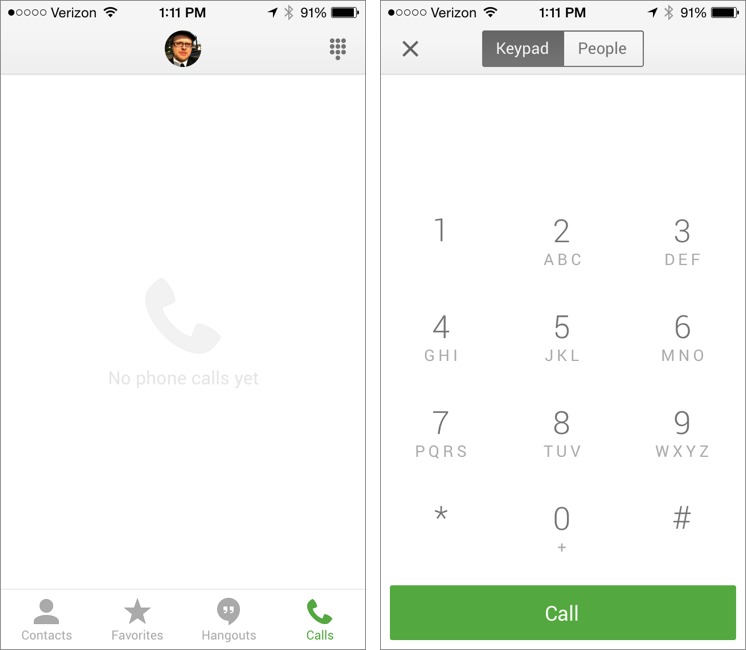 On the Mac side, to place a call, click the Hangouts button in the extensions bar or on the Mac’s menu bar to reveal a window in the lower-right corner of your screen. Click New Hangout, and enter the phone number you wish to dial.

Calling normal phone numbers within the United States and Canada is free with Google Hangouts if you’re in those countries (1¢ per minute from everywhere else), and if you want to call internationally, per-minute rates apply.

On Android, Hangouts can completely replace the built-in text-messaging app. But on iOS, the Hangouts app can send text messages only to other Hangouts users, much like iMessage. To send and receive SMS text messages with your Google Voice number for free, you must install the free Google Voice app. It’s desperately in need of an update, and doesn’t support MMS messages, but the price (of the app and the SMS text messages) is right. 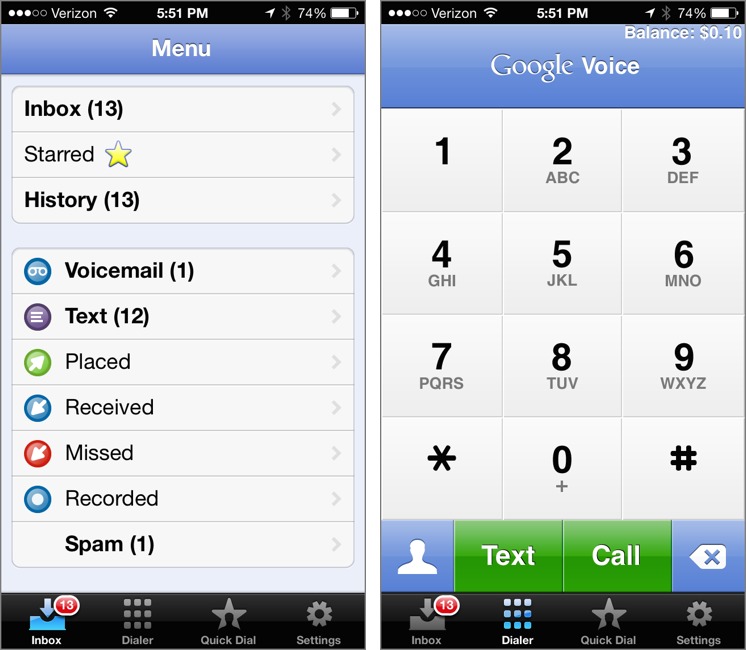 Cutting the Virtual Cord — We’re sure there are other options that may be better in certain situations, but you can likely get by in most cases with FaceTime Audio and Google Hangouts, and pay no more than is necessary to get cellular data while away from Wi-Fi. This combination isn’t a perfect replacement for an iPhone, but if it can cut your costs by hundreds of dollars a year, it might be worth the extra hassle. And if you’ve run across other solutions that work better for you, let us know in the comments!

Comments About Use Your iPod touch or iPad as an iPhone