According to Goldman Sachs technology analyst Boynton Glick, Apple’s entry into the electric car market has been delayed yet again. As the San Francisco Chronicle reported, Apple merger and acquisitions executive Adrian Perica met with Tesla CEO Elon Musk in 2013 to talk about the possibility of a merger, with the goal of introducing an Apple-branded automobile — the iCar — by late 2014. However, circumstances have delayed Apple’s plans, Glick says, putting the project in jeopardy before the rubber hits the road and accounting for Musk’s latest statement that an Apple-Tesla merger is “very unlikely.” Here then are the 7 reasons why Apple’s iCar efforts are stalling.

1: They don’t fit in Apple Stores — Glick introduced us to a former Apple Genius in Santa Monica, who told us that the company has already performed a trial run of showcasing cars in Apple Stores, using the Tesla Model S as a stand-in for an eventual iCar.

“It was a disaster,“ the Genius said. “Our stores may look spacious, but that’s when you’re showing off iPhones, iPads, and Macs. Cars are huge in comparison. We had to remove the entire front wall of the store, drive the Tesla in, and reassemble everything. It took hours and we had to do it in the middle of the night.” 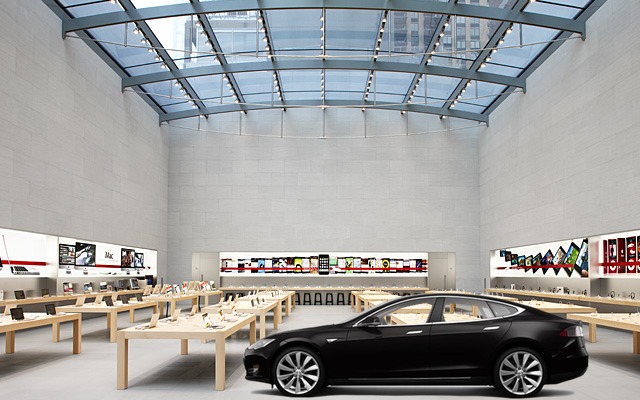 2: Apple’s “soft” controls are getting NHTSA pushback — As you might expect, Apple’s iCar concept eschewed a standard physical steering wheel and pedals in favor of highly configurable touchscreen controls. Instead of a steering wheel and console, the driver uses a 17-inch touchscreen, carefully angled for comfortable use, with a circular “touch wheel” control in the middle, and a slider that does double duty for accelerating and braking next to it. All other controls can be positioned as the driver likes — press and hold until the controls shake, and then drag them around, just like on an iPad — and the car automatically loads different user configurations based on weight sensors in the seat.

Although the soft controls have tested well with younger drivers accustomed to learning video games, the move has not gone over well with the U.S. government. “Every car on the road is federally mandated to have a steering wheel,” said Mort Tality, spokesman for the National Highway Traffic Safety Administration. “I don’t know what Apple was thinking, designing this like a driving game. We haven’t seen something so silly since Ford’s “wrist-twist” steering rings.”

3: Apple Maps still isn’t up to snuff — Just as Apple dropped Google Maps in favor of Apple Maps, the company is also avoiding Google’s self-driving car technology and developing its own approach to allowing the iCar to drive itself without human intervention. Unfortunately, Apple Maps continues to be the Achilles heel of the system, refusing to take passengers into mall parking lots, denying the existence of hospitals, and more. One test driver had to abort after realizing that the iCar was heading for a Starbucks in Saratoga Springs, NY, rather than in Saratoga, CA.

4: Apple Geniuses are not car mechanics — “I don’t know the first thing about cars,” our Apple Genius source said. “Sure, electric cars like the Tesla are a lot more like computers than traditional internal combustion vehicles, but there are still a lot of turny things inside that aren’t our strong suit.” Apple apparently offered Tesla maintenance training for Geniuses at the Santa Monica store, which did not go over well with employees. 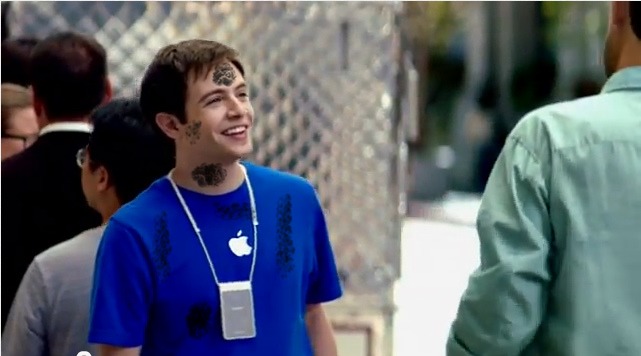 5: Nest was acquired by Google — Apple may not want to be reliant on Google technology, but it’s not above strategic acquisitions. To that end, the company was wooing Nest Labs, founded by former Apple engineers Tony Fadell and Matt Rogers, in order to acquire Nest’s self-learning thermostat technology for use in the iCar’s climate control system. Those plans had to be scrapped after Google — sensing an opportunity to throw a wrench into Apple’s automotive plans — snapped Nest Labs up for $3.2 billion, forcing Apple to return to the drawing board. Apple is now reportedly in talks with BMW to license portions of the German carmaker’s iDrive vehicle control system.

6: No car wash mode — Apple Senior Vice President of Design Jonathan Ive values simplicity above all else, but perhaps he went too far with the iCar? Many new vehicles feature automatic wipers, activated by motion sensors. But Ive didn’t want a manual override on the wipers cluttering up the iCar’s touchscreen interface. This worked fine until test drivers ran the iCar through car washes. Sources say that Apple is considering building iCar dry-cleaning stations in Apple Authorized Charging Stations (located in the same malls as Apple Stores), charging $99 per year for 5 washes and 25 charges with an AppleCar+ plan.

7: Apple insisted on a proprietary charger — Electric vehicle chargers are becoming increasingly common, with the popularity of the Chevy Volt, Nissan Leaf, and plug-in Prius. You can even find charging stations in Cracker Barrel parking lots, and wherever they are, they use the SAE J1772 charging system and coupler standard. But Apple wants a charger that’s completely incompatible with all of them.

That’s not surprising, nor is the fact that Apple’s high-power car charger is based on its MagSafe laptop chargers, eliminating the worry about pulling away from a charging station while still connected. But that also means you’ll need to buy and carry a J1772 adapter with you at all times, should you wish to charge at a public charging station, or visit the closest Apple Authorized Charging Station. Tesla owners are in the same boat, and have expressed some irritation with the company’s decision to go with its own connector and Supercharger stations.

Comments About 7 Reasons Apple’s iCar Is Delayed: Is the iCar Doomed?