We have three quick ExtraBITS for you today, starting with the return to the App Store of the essential password utility PassScreen, Apple finally giving a nod to the wearable market, and “Take Control of Your Passwords” author Joe Kissell talking about password security on Oprah.

PassScreen Returns to the App Store — The folks at Transparental Softworks have released a quick-turnaround update to their iOS app PassScreen to resolve a security issue that prompted Apple to remove the app from the App Store. The useful app lets you store up to ten of your most used passwords, and then turns that list into your iOS device’s lock screen wallpaper so your passwords are always readily at hand without having to launch a separate password app. Your passwords are also synced between devices via Twitter. The problem stemmed from PassScreen using an undocumented API to set an image of the password screen as the lock screen automatically; in version 1.0.2, the user must manually choose the image in Settings > Wallpapers & Brightness. “Like Apple, we take security seriously and regret this inadvertent error,” said Transparental CEO Art Locke.

iPatch to Compete with Google Glass — Apple has finally indicated how it will enter the wearables market, contending against Google Glass with its upcoming iPatch, which connects via low-power Bluetooth to an iPhone 5 (or later) or a fifth-generation iPod touch to show the device’s screen overlaid on a live image from the iPatch’s front-facing camera. The 1136-by-640 pixel display mimics the resolution of its host device, but is so much closer to the eyeball that it brings new meaning to the term “Retina display.” Apple Senior Vice President of Design Jony Ive
acknowledged that the swashbuckling look is a new direction for Apple, but said that, by blocking out extraneous visual input on one eye, the iPatch is in line with the company’s design mantra of focusing purely on content. The iPatch will come in a variety of colors, including Ebony, Sable, Jet, Obsidian, and Coal, and will cost $199 when it ships in June 2014. (Image courtesy Weylon Smith.) 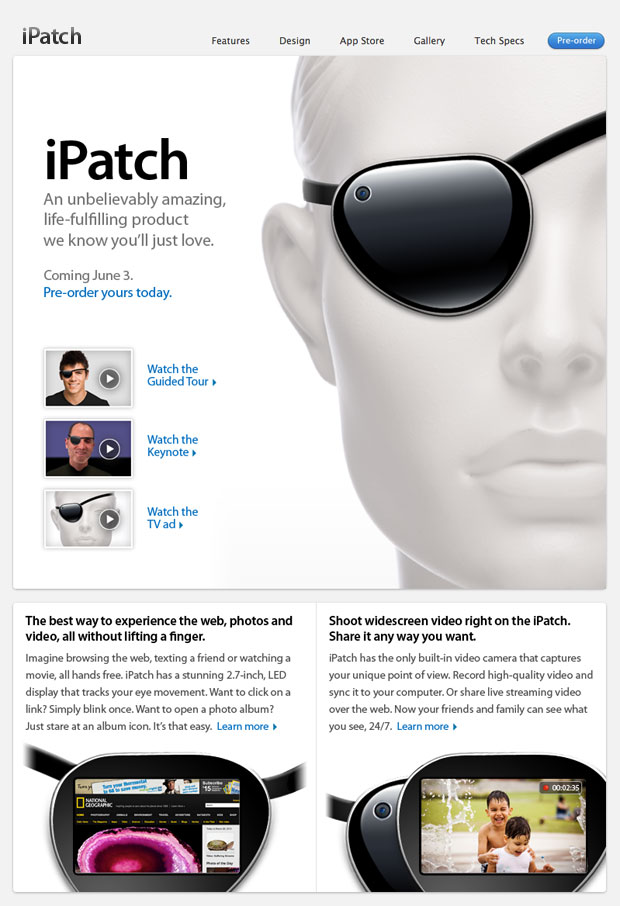 Joe Kissell to Explain Password Security on Oprah Prime — Our own Joe Kissell has talked to many a Macintosh user group and been on innumerable podcasts, but he’s gearing up for the biggest and most unexpected appearance of his career today — alongside Oprah Winfrey on the Oprah Prime show on her Oprah Winfrey Network. Joe will be explaining why viewers need to create random passwords, why passwords shouldn’t be reused between Web sites, and why a password management app like 1Password is key. (And don’t say anything, but under the chair of each member of the studio audience will be a 64 GB iPad Air pre-loaded with Joe’s “Take Control of Your Passwords,” “Take Control of 1Password,” and “Take Control of Your Online Privacy.”)

Comments About ExtraBITS for 1 April 2014