Apple has announced the dates for its 2014 Worldwide Developer Conference in San Francisco as June 2nd through 6th. The conference will bring together 5,000 attendees and 1,000 Apple engineers to, as the invite says, “Write the code. Change the world.” 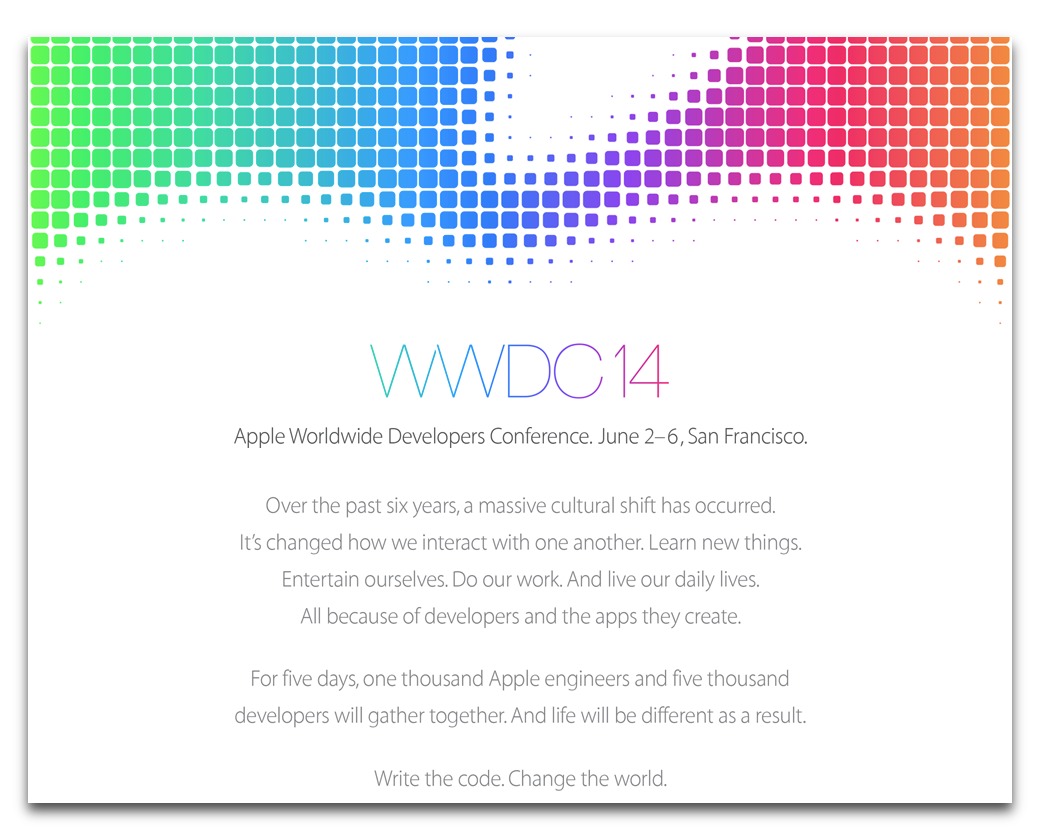 In the past several years, WWDC has been dogged by registration problems, with last year’s conference selling out in less than 90 seconds and frustrating many developers. To address the issue this year, Apple is making tickets available only by random selection; to enter the lottery, you must register by 10 AM PDT on 7 April 2014. You must be a current member of Apple’s Mac or iOS developer programs to register, and if you’re selected, you must purchase the $1,599 ticket by 5:00 PM PDT
on 14 April 2014. Importantly, Apple says the tickets “are for use by the selected applicant only and may not be sold, resold, bartered, auctioned, or transferred in any way.”

That said, there is an exception for development teams. Apple says:

As an exception to the foregoing, requests to transfer tickets among eligible team members may be submitted to Apple for consideration at [email protected] Apple reserves the right to reject any transfer requests.

If you don’t win in the lottery, second prize is being able to watch all the videos from WWDC; Apple claims they’ll be posted the same day. You won’t be able to talk with Apple engineers, ask questions in sessions, or network with fellow developers, but at least you’ll be able to see most of what those in attendance will see.

Overall, the lottery seems like an excellent solution to the frustration experienced by developers in the last few years, when those who wanted to attend had to be ready to click madly through an ordering system that often failed under the load. And if you weren’t ready at the exact instant registration opened, you stood no chance of getting a ticket. It was a bad system, and although the lottery may not be perfect, it’s a lot better. It will also be interesting to see just how many people want to attend WWDC.