We’ve mostly recovered from the endurance event that is a journalist’s lot at Macworld/iWorld (for Adam and Tonya, getting only 3 hours of sleep on the red-eye home didn’t help!), and we’d like to share more of the neat stuff we saw at the show (for the first part, see “Cool Products from Macworld/iWorld 2014: Part 1,” 31 March 2014). If we’ve overlooked something that you thought was great, please let us know in the comments!

Henge Horizontal Dock — The folks at Henge sell a number of attractive MacBook docks, but we’ve never seen anything as complete as the upcoming Horizontal Dock. Insert your MacBook and, with the touch of a button, the Horizontal Dock automatically docks and undocks it. The dock provides 14 ports, supporting up to three external displays, six USB 3.0 peripherals, two audio devices, an Ethernet connection, an SD Card, a FireWire 800 device, and power. Even better, optional utility software can save and recall window positions so you don’t have to rearrange your desktop constantly. Versions will be
available for the 11-inch MacBook Air, 13-inch MacBook Air, 13-inch MacBook Pro, and 15-inch MacBook Pro. Pre-orders are being taken now, with prices starting at $299. [JJDC] 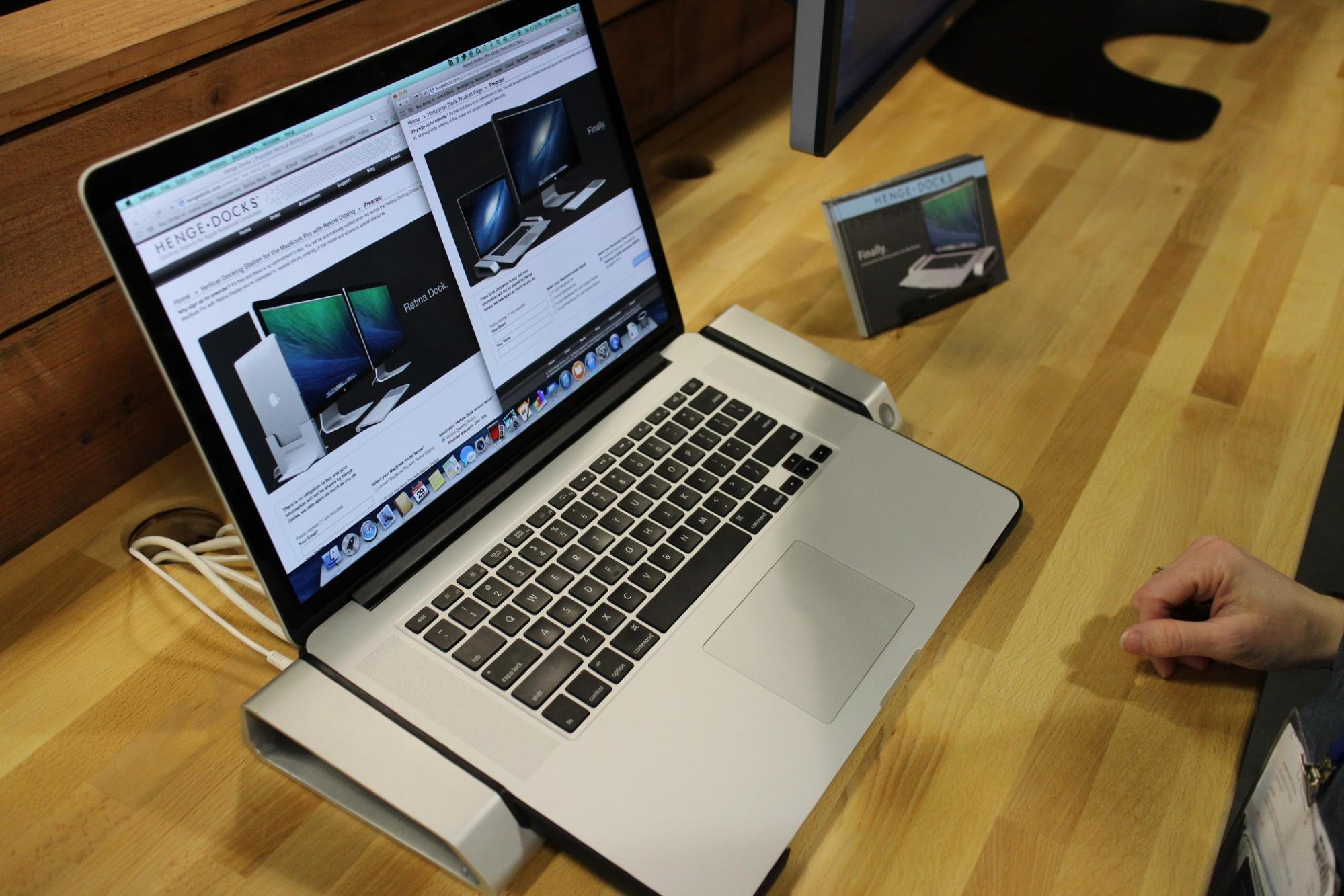 CoPilot — Between Apple Maps, Google Maps, and a plethora of third-party entries, the market is saturated with turn-by-turn GPS apps. Nonetheless, CoPilot might appeal to iPhone or iPad users with limited data plans: it doesn’t retrieve map details on the fly, chewing up megabytes of data. Instead, you download maps for your region ahead of time over Wi-Fi and CoPilot uses those, reducing the amount of precious cellular data used for navigation to a relative trickle. The maps aren’t small: those for the southwestern states, for example, consume over 200 MB of
storage. Luckily, you can purge downloaded maps when you no longer need them. The app is free and provides 14 days of voice-guided 3D navigation and ActiveTraffic; after that you retain access to offline maps but must make in-app purchases for turn-by-turn directions and traffic. (There are other GPS apps like CoPilot; although it may be more expensive, we’ve long been fond of Garmin’s Navigon. For our initial review, see “Navigon MobileNavigator App Bests Standalone Devices,” 6 December 2010.) [MEC] 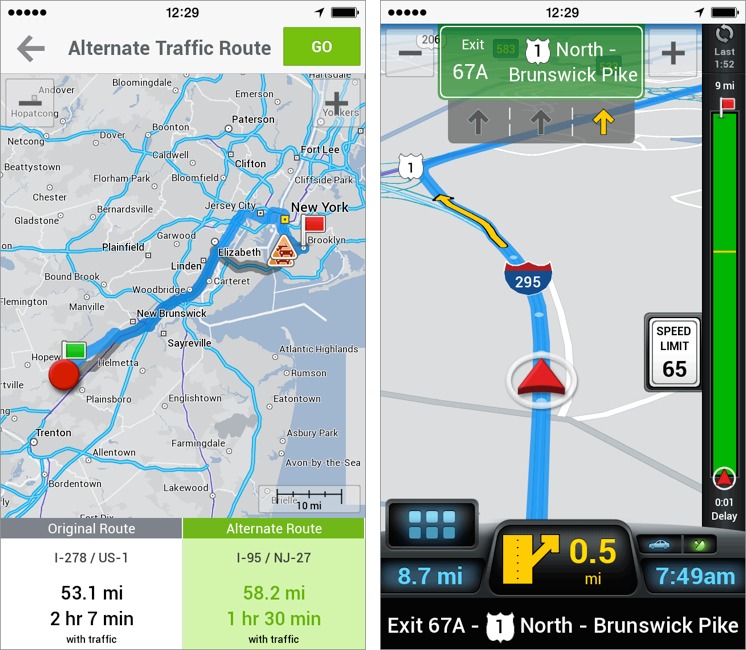 Fleksy Alternative Keyboard — Despite iOS’s decent auto-completion capabilities, typing in iOS, particularly on an iPhone, is still a tedious, error-prone affair. If you despair of being able to type effectively on your iPhone, check out Fleksy, an alternative keyboard that uses the familiar QWERTY layout, but boasts powerful text prediction and autocorrect engines that go well beyond what Apple’s keyboard can do. Fleksy takes a little getting used to (you can turn off the spacebar row to get bigger letters, and then swipe right to add a space and left to delete), but the company rep could type surprisingly well even without looking
at the screen. You can’t replace iOS’s default keyboard, of course, since Apple is unamused by such temerity, but you can type in the free Fleksy app and transfer text via copy and paste. A small number of apps have integrated Fleksy’s SDK and thus support the Fleksy keyboard — encourage the developers of your favorite apps to support the Fleksy SDK if you want to use it more broadly. [ACE] 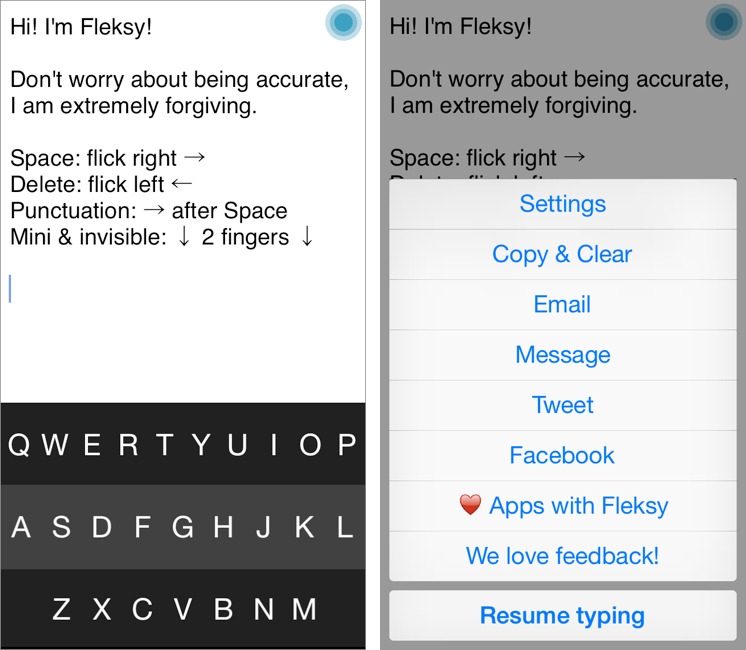 BakBone — A vast ecosystem of accessories has sprung up to address the problem of how to hold the iPad more securely and comfortably (see “Palm Your iPad with a Hand-e-holder,” 29 October 2010). The most interesting new entry in this field that we saw at the show is the $29.95 BakBone, which lets you maintain a solid grip on the iPad by slipping your finger into a large plastic ring that attaches to the back of the iPad. You glue a magnet to the back of the iPad, and the ring grabs tightly to the magnet. It is possible to remove the magnet, if you decide you want an unsullied iPad
at some point in the future. Obviously, the BakBone would also work for any other tablet or device you want to carry in the palm of your hand, and it even doubles as a stand. [ACE] 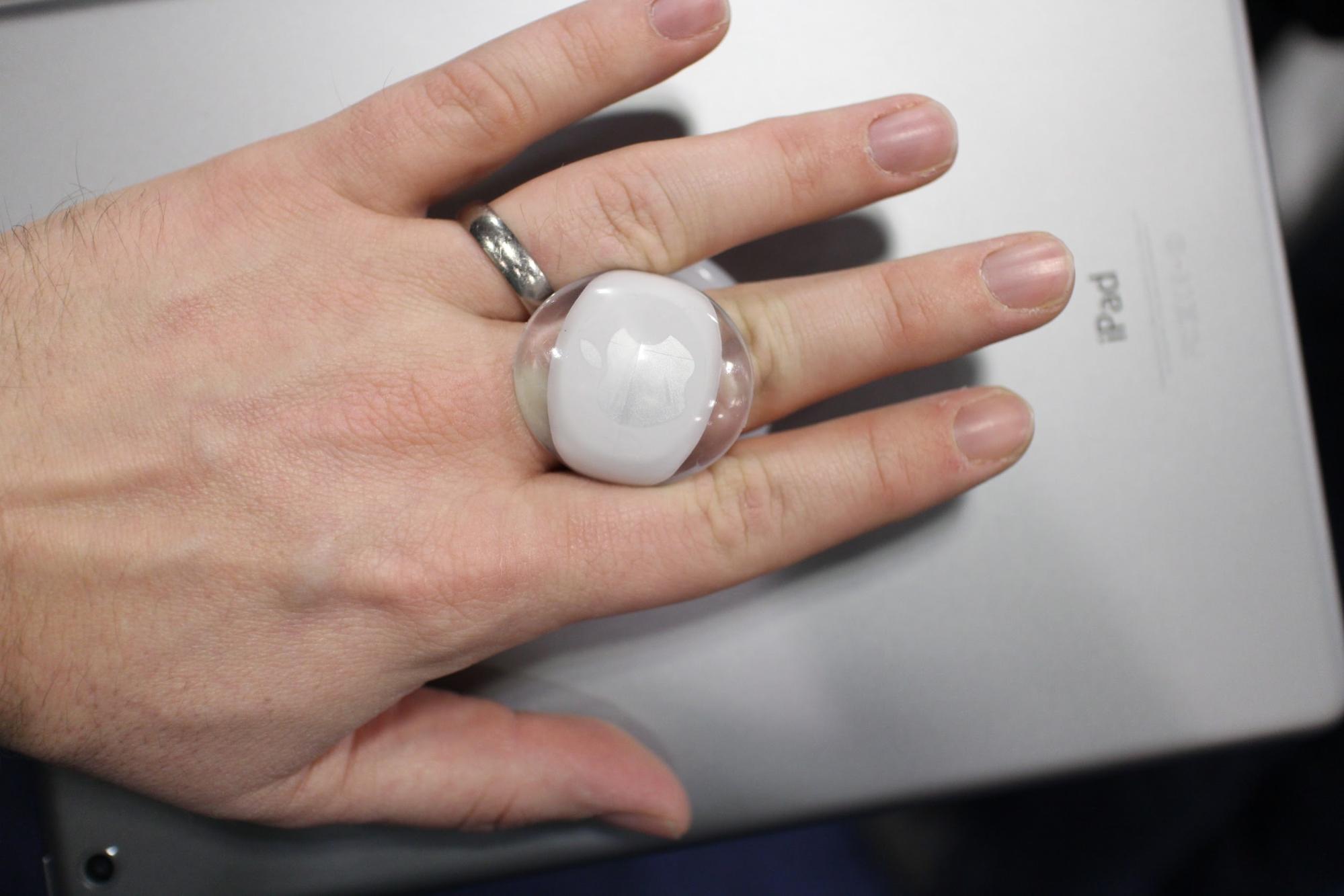 RefurbMe — The best deals on Macs and iOS devices often come through Apple’s refurbished products program, which sells hardware that’s reconditioned to be like new at up to a 40 percent discount. The machines, which may have been used as demo units or for Apple workshops, have the same 1-year warranty and AppleCare options as new products. The trick with buying refurbs comes in knowing what’s on sale when, since the best deals disappear quickly. That’s where the free RefurbMe service helps out. You tell RefurbMe what you want, and the service notifies you when the
device you want becomes available in Apple’s refurb program, alerting you via SMS, email, or even iOS push notification via the free RefurbMe app. [JJDC]

Spot On Time — Here in Ithaca, there’s no real traffic, and nothing is that far from anything else. But in larger cities, driving to where you need to go — and arriving on time! — can be tricky, since you need to take into account distance, route, traffic, parking, and walking from where you park. A new app and service called Spot On Time aims to fix that by figuring out how long every part of a trip will take and building that into a schedule so the app can alert you to when you have to leave. En route, you’ll get turn-by-turn voice guidance (powered by TomTom), and once you arrive at a parking garage (for some, Spot On
Time can even tell you if spaces are available), you’ll get walking directions to your final destination. The app is free, and you can give it a test run for 2 weeks, after which you need to subscribe to the service. Happily, Spot On Time has a variety of plans, including $3.99 for a week, $5.99 for two weeks (these are ideal for trips), $14.99 for 3 months, and $39.99 for a year. Seems like a killer app for anyone who does a lot of driving under tight time constraints. [ACE] 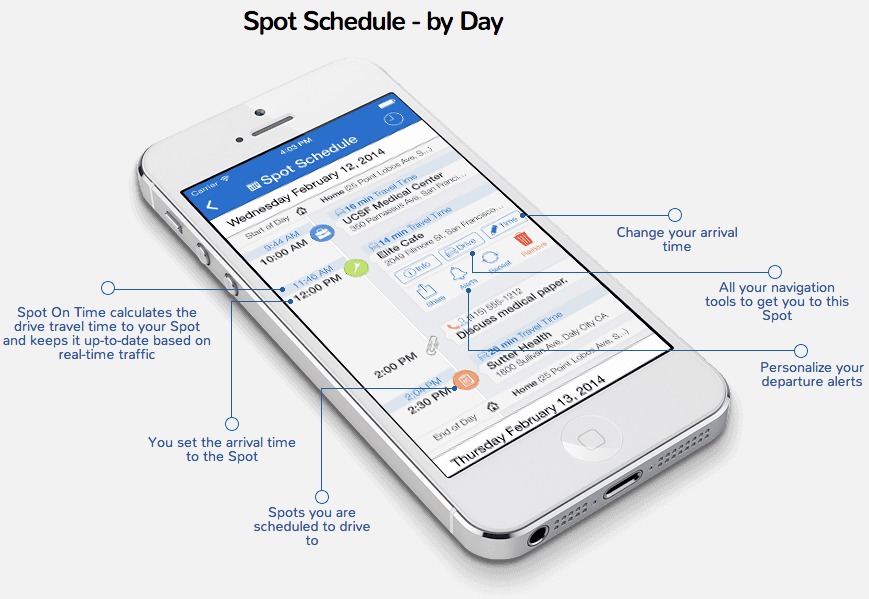 Grip&Shoot — Sure, you can use a volume button to take a picture with your iPhone one-handed, but it’s still an uncomfortable position that can easily result in a dropped phone. For a better approach, check out the $99.95 Grip&Shoot, a case/handle combination that lets you hold your iPhone in one hand and control it using integrated zoom buttons and a trigger for the shutter (the handle talks to the iPhone via Bluetooth). You can also disconnect the case from the handle, position the iPhone however you want, and use the handle’s buttons as a remote. Right now, the Grip&Shoot works only with a free app from the
company that takes still images and video, but there’s an SDK available to developers, and the company hopes that more apps will add support. [ACE] 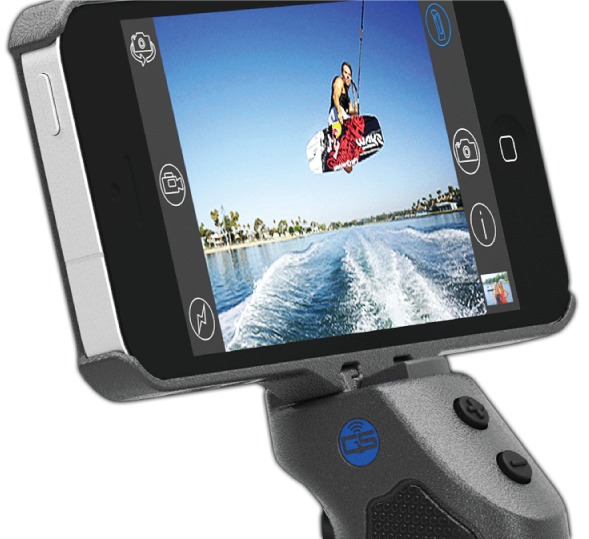 TAPPD — With over 1 million apps in the App Store, it’s increasingly difficult to find the app you want (which isn’t great for the developer making that app either!). Burst2life’s TAPPD is an app-based social network that aims to fix this problem by exposing apps recommended by friends. You can quickly see what’s most-liked in the community, as opposed to just what’s downloaded the most. You can also follow others on TAPPD to see their favorite apps. It’s an interesting concept, but will it gain traction? In the meantime, there’s little downside in giving it a try if you’ve
found searching for apps in the App Store as infuriating as we have. [JJDC] 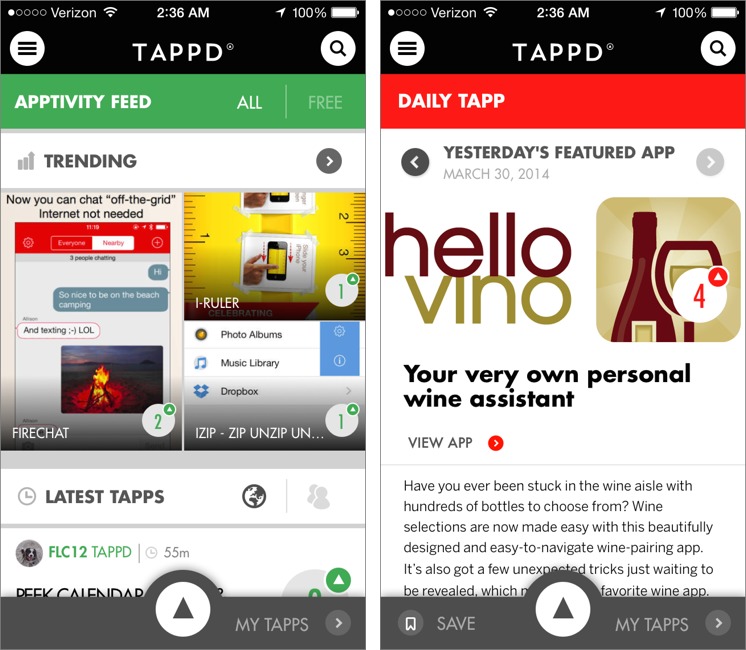 FUZ Designs EverDock — When multiple independent people feel compelled to tell you about a particular product on the Macworld/iWorld show floor, you take a look. The EverDock from FUZ Designs didn’t disappoint, not because it’s all that innovative (it’s a smartphone/tablet dock, for heaven’s sake) but because it’s so well designed in field of products that constantly fails the journalist’s “But what about?” test. The EverDock is machined from a solid block of aluminum, giving it a nice heft, and a micro-suction pad on the bottom ensures that it stays in place when removing your device. Because it features
a pass-through channel for the charging cable, it works with virtually all smartphones and tablets that use Lightning, 30-pin dock connector, or micro-USB connectors. With several thicknesses of silicone spacers, the EverDock even works with most cases. It’s available in silver, space gray, and gold, and costs $49.99, with discounts for multiple units. FUZ also offers the similar EverDock Duo, which costs $69.99 and offers a pair of spots that hold two devices. [ACE] 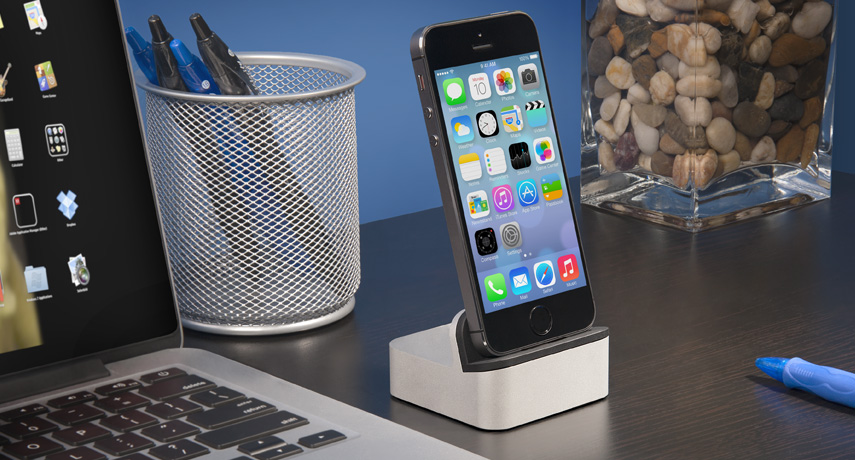