My wife walked into my office one day, complaining that her MacBook Pro’s speakers were too quiet, and I was reminded of a handy utility by Global Delight: Boom, which can boost your Mac’s system volume. Boom 1.9 costs a mere $6.99 from Global Delight or the Mac App Store and requires OS X 10.7 Lion or later.

When you install Boom, it adds a new virtual audio device to your Mac, which necessitates a restart. This is an important point, since if you do professional audio recording in an app like Audio Hijack Pro, you can still select the built-in audio device to keep from Booming out your eardrums. 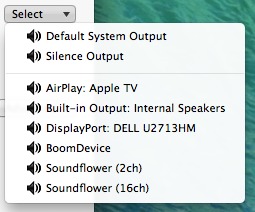 Once installed, Boom lives in your menu bar. Click it, and like the volume menu bar icon, it displays a volume slider to boost your system’s audio. By default, the system-wide hotkey for boosting system volume is Command-Shift-+, with Command-Shift– reducing the boost. It even displays an on-screen graphic, similar to the system’s volume graphic. 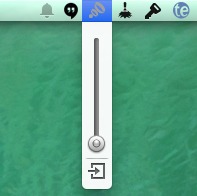 Notice the button under Boom’s volume slider? Click that, and it brings up the full Boom window with a few more options. Perhaps the most useful feature of Boom is its system-wide equalizer. To access it, select Mac Volume in the Boom window, or Option-click the menu bar icon to choose presets. There are a number of built-in presets, like Bass Boost, Music, Vocals, Movie, and my favorite, Rock. 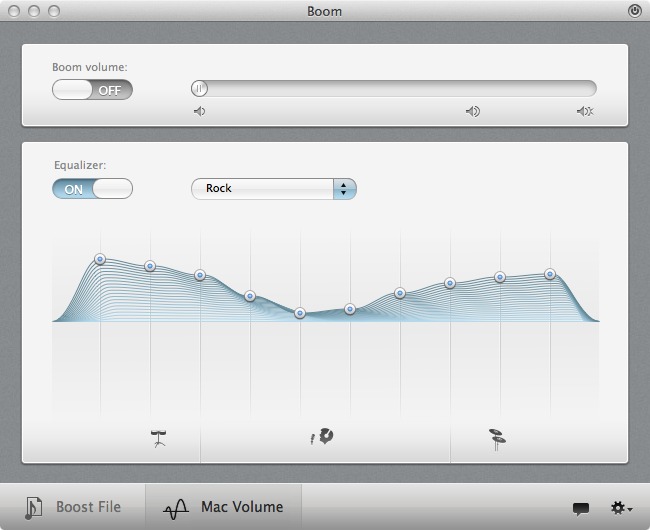 I’m not usually a fan of equalizers, but I’ve found that the Rock preset in Boom makes all of the audio coming out of my Mac much clearer, even for spoken word content, like podcasts. That in itself has made Boom worthwhile.

Boom isn’t limited to managing system audio on the fly. It can also boost the volume of individual audio and video files. To do so, open the Boom window, click Boost File in the lower left, and drag in your files. Select your boost level, then click Boost, and Boom creates volume-boosted copies of your files, and you can even have them added to a special iTunes playlist. 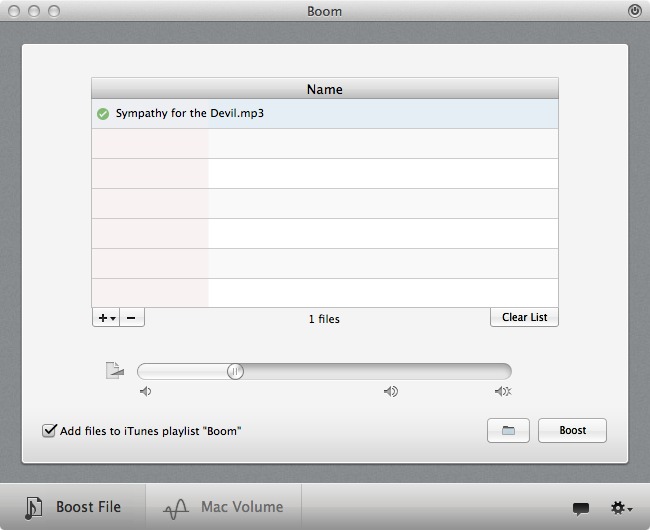 Let’s get down to brass tacks. Does Boom work? Yes, and quite well. It will make your Mac’s speakers emit substantially more volume — Global Delight claims 400 percent more. In my casual testing with the SPLnFFT Noise Meter app (which won Safety Awakenings’ accuracy tests), the opening riff of Soundgarden’s “Pretty Noose” measured at around 70 dB at full
blast with Boom off and 85 dB with Boom maxed out. According to a chart on the Perdue University Web site, that’s like going from listening to a vacuum cleaner to a diesel truck driving by at 40 miles per hour. But more to the point, is it a good idea to push your speakers that hard?

The company says that it has performed extensive testing with Boom, and has found no evidence of speaker damage. However, a couple of online commenters have complained about weak sound from their speakers after using Boom extensively. But otherwise, it has 4.5 stars in the Mac App Store with 20 ratings. Personally, I find that the speakers in my MacBook Pro produce plenty of
volume already, especially when it’s elevated and angled by my Roost laptop stand (for our review, see “Sit Up Straight for the Roost Laptop Stand,” 4 April 2014). Perdue’s chart indicates that listening to 80 dB for eight hours may cause hearing damage and that 90 dB over eight hours will likely cause damage.

In my testing, I noticed some distortion after maxing out the system volume and turning Boom past three clicks. That’s undesirable, and as anyone who has worked in car audio can attest, delivering too much power to a speaker can damage it.

But I think with a bit of common sense, Boom is a useful tool to keep on hand. My Mac’s audio is plenty loud for my usually quiet office, but for a place like a crowded auditorium (where my wife spends a lot of time), it could be a useful short-term boost. For regular use, a powered speaker (see Dan Frakes’s buying guide to speakers at TechHive) or Twelve South’s nifty BaseJump 2 might be a better idea. In my hedonistic PC-using days, I had a home theater receiver and bookshelf speakers connected to my tower with an optical cable. It was an awesome setup, but occupied a massive
amount of desk space.

For $6.99, Boom is worth it for the equalizer alone, with the advertised volume-boosting feature being more of a nice thing to have on hand as long as you’re cautious when using it. Thanks to Boom, my Mac’s audio sounds much clearer and fuller, without having to devote precious desk space to external speakers.

Comments About FunBITS: Boom for Mac Pumps up the Volume