M. C. Escher is famous for his woodcuts, lithographs, and mezzotints that depicted mind-bending optical illusions. Perhaps his most iconic is “Relativity,” which depicts a gravity-defying room that contains four staircases, all going in different directions. Taking a cue from Escher, the game Monument Valley by ustwo revolves around optical illusions, where the only way to progress is to consider the impossible. Monument Valley costs $3.99 in the App Store, requires iOS 6.0 or later, runs on
both the iPhone and iPad, and is a 147 MB download. Check out the release trailer.

In Monument Valley, you guide the silent protagonist Princess Ida through ten chapters of beautifully designed 3D puzzles. Simple taps tell the princess where to go, but you also can turn the stage itself, revealing new perspectives. It’s reminiscent of Fez, another well-regarded game that mixes 2D and 3D perspectives. 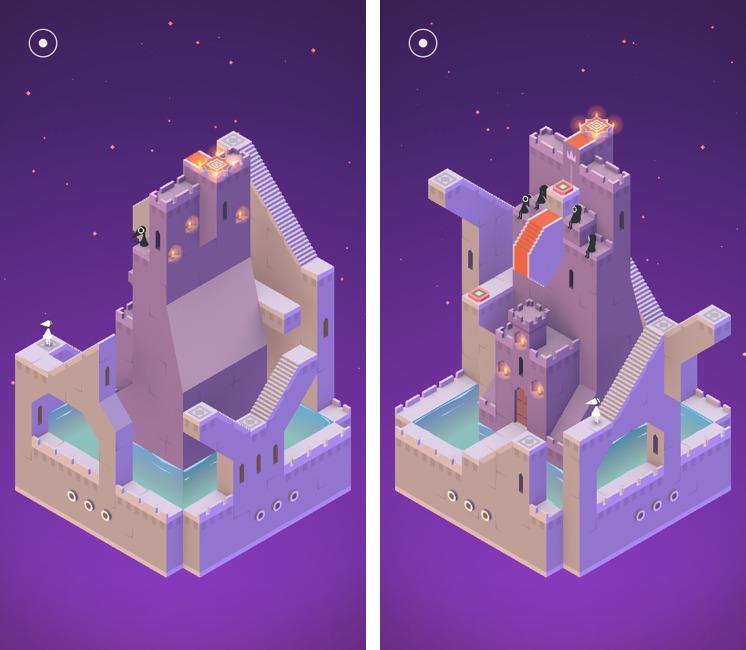 At heart, Monument Valley is a puzzle game, and the challenge of the game is learning to think outside the constraints of physics or common sense. Manipulating your surroundings to form the necessary optical illusion is key. For instance, you might see two unconnected objects that, when you rotate the stage, suddenly form a bridge. 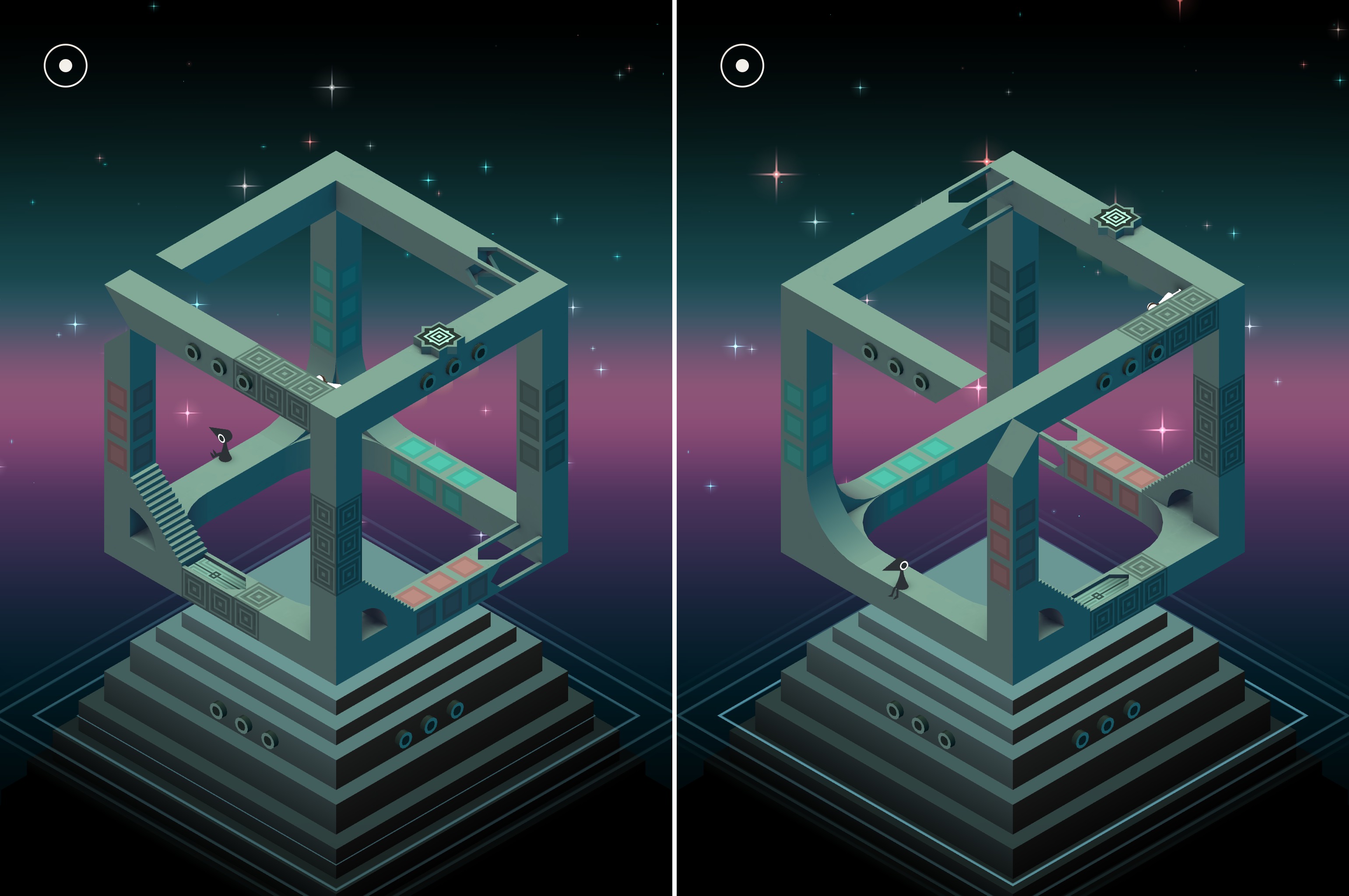 There are also opponents, the Crow People, who annoyingly block your path. But unlike many video games, you can’t die, and there’s no way to screw up beyond repair. If a tactic doesn’t work, try, try again. That helps make Monument Valley as relaxing as it is challenging.

Perhaps the most outstanding feature of Monument Valley is its art design, and intentionally so. “Every screen of Monument Valley has been carefully considered as graphic design, so that each one could be printed and framed,” the press release from ustwo boasts. To drive that point home, the game has a built-in camera that lets you zoom in on any part of a scene, and share the picture with friends or on social media. 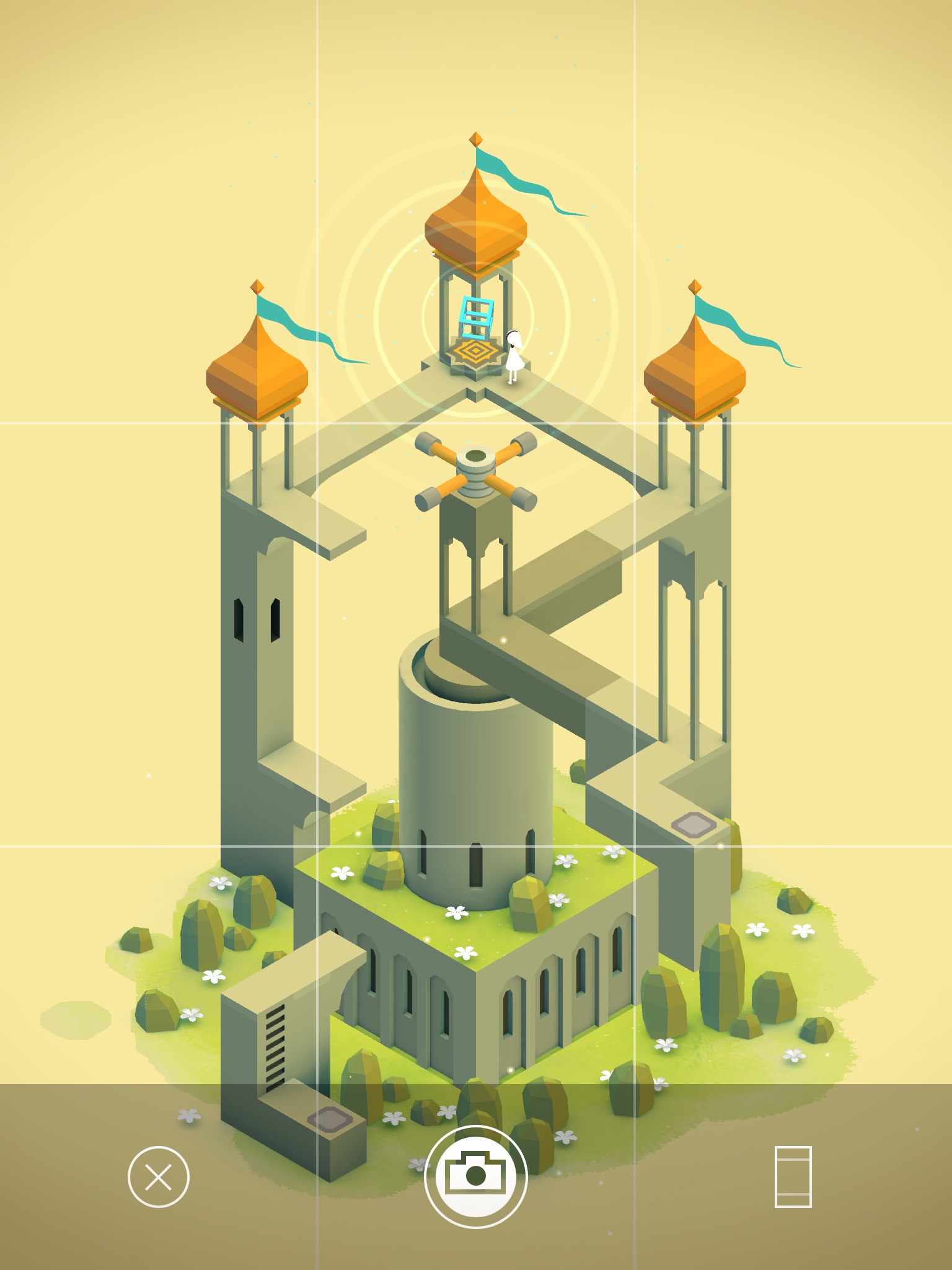 Is that pretentious? No, in fact, the game is so pretty that it’s a welcome feature. With its simple shapes and pastel colors, it borrows many of its cues from iOS 7. It’s no wonder that the game is so beautiful — ustwo was an international design firm well before it branched out into gaming. If Monument Valley doesn’t win an Apple Design Award next year, I’ll eat my hat.

The beauty of Monument Valley’s gameplay paid off. While it’s currently hovering around the 48th spot in the App Store Top Paid rankings, it dominated the number one spot for a while after launch. When it often seems like iOS games have been taken over by lousy in-app purchase money grabs, it’s nice to see an old-fashioned game that you pay a single fee for do well.

My only complaint is that Monument Valley is short. There are only ten chapters, which I beat in a week of casual play. A more dedicated player could probably knock them out in an afternoon. But it’s nice that the game is quick enough for anyone to be able to experience it all. With that being said, I’d pay a couple of extra bucks for more levels, as I’m not opposed to paying for actual content. (For another example, see “FunBITS: République Episode 1: Exordium for iPhone and iPad,” 24 January 2014.)

If you’re looking for a beautiful, relaxing puzzler that won’t soak up all of your free time, then Monument Valley is well worth the $3.99 asking price.