Much like the 29-year-old who feels the need to get his or her life in order before the dreaded 30-something tag is applied, Mozilla has released Firefox 29 with a refreshed look and new strategies to deal with adulthood, including an overhauled synchronization service and new customization tools.

Firefox’s redesign is a bit reminiscent of Google Chrome, with tabs placed closer to the top of the browser window and non-active tabs fading into the background to emphasize the active tab. The Bookmarks button has also moved and now produces a slimmer view of your bookmarks.

Taking another design cue from Chrome, a Firefox menu button (three stacked horizontal lines, sometimes called a hamburger button) now resides at the far right side of the toolbar, providing quicker access to basic browser controls, preferences, printing, and managing add-ons. At the bottom of the popover you’ll find the new Customization button, which enables you to add and move icon buttons within the Firefox menu or on the toolbar. (If you miss the full tab titles at the top from the previous versions of Firefox, you can click the Title Bar button to bring them back.) 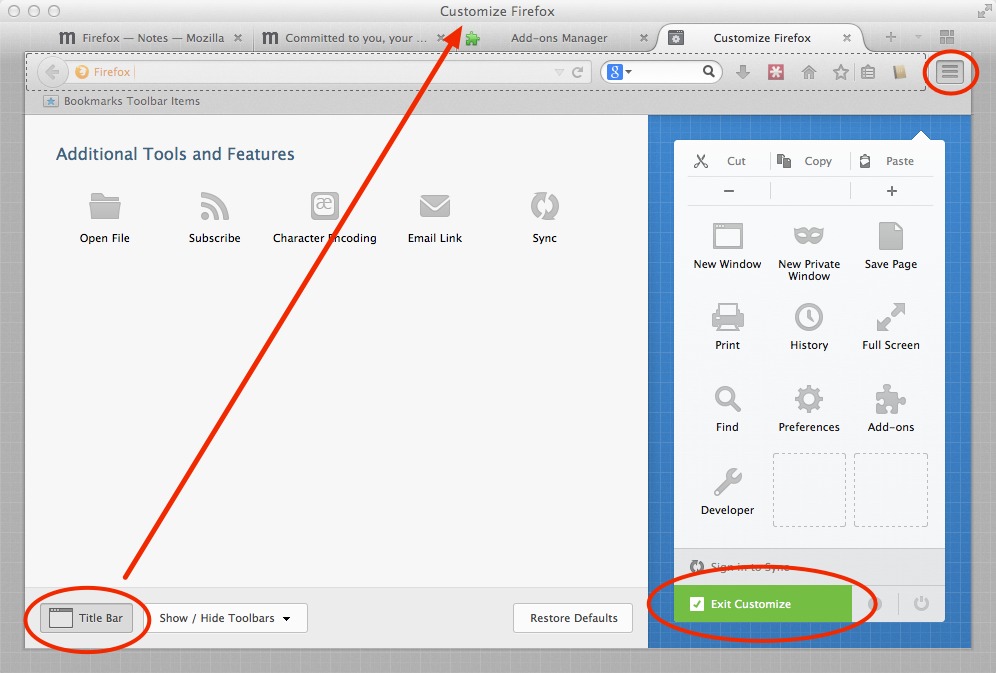 If you update to Firefox 29 on one Mac that has already been paired to an older version of Firefox on another computer, synchronization using the previous account credentials will continue to work. Our testing confirmed that bookmarks, history, and passwords continue to be synchronized between different versions of Firefox on different computers.

You first have to unlink Firefox from your old credentials. This decoupling occurs in Preferences > Sync, where you first click Unlink This Device below the Device Name field. Then, from the same Sync preference pane, click Create Account to set up your new Firefox Account credentials.

After verification is sent via email, your new Firefox Account sync services become active. But you’re not done yet. You also need to update all of your previously paired computers to Firefox 29 (plus update any Android devices to the most current version of Firefox Browser for Android), and then sign in using your new Firefox Account credentials.

Firefox 29 is a free download from Mozilla (56.1 MB), and it requires Mac OS X 10.6 Snow Leopard or later. Check out this blog post (or the full release notes) for details on additions to Firefox’s developer tools.