As the resident iBooks Author geek at TidBITS, I was not surprised when Adam Engst forwarded me a press release for a “novel-length work of literary fiction created with iBooks Author” and asked me if I wanted to take a look. What I found was an interesting, if not satisfying, mystery about art theft and chicanery in Venice: “Venice Under Glass,” by Stephan J Harper.

Plot and Execution — The tale is recounted by the protagonist, one “Basil Baker” — a self-described “sleuth — a seeker of truth” who has been summoned to Venice by his Uncle Clive to help solve a rash of thefts of priceless Venetian glass from private collections and museums — a civic catastrophe described by the press as Il Maladora di Venezia. As Basil pursues various leads and clues, he meets a wealthy philanthropist, an art historian / tour guide with a black belt, a stereotypically clueless police inspector, a helpful singing gondolier, a jet-ski-riding gang member who is also the scion of a respected Venetian family, and a world-famous
rap-music artist. Along the way, the narrator recounts various historical and cultural facts about the city known as the Queen of the Adriatic.

Oh, and all of the characters in the book happen to be teddy bears… did I not mention that?

The plush ursine cast allows the author to make a number of mildly amusing jokes, as well as to include some scenes that, were humans involved, might be too violent for many readers — for example, one character is brutally torn limb from limb. But fear no nightmares: in this world, thread and stuffing replaces blood and guts, and even the most severe injuries can be repaired by “the very best tailors and seamstresses in Italy.” (At another point in the tale, one character under interrogation has an eye brutally popped out — and then sewn back on so the questioning can continue!) 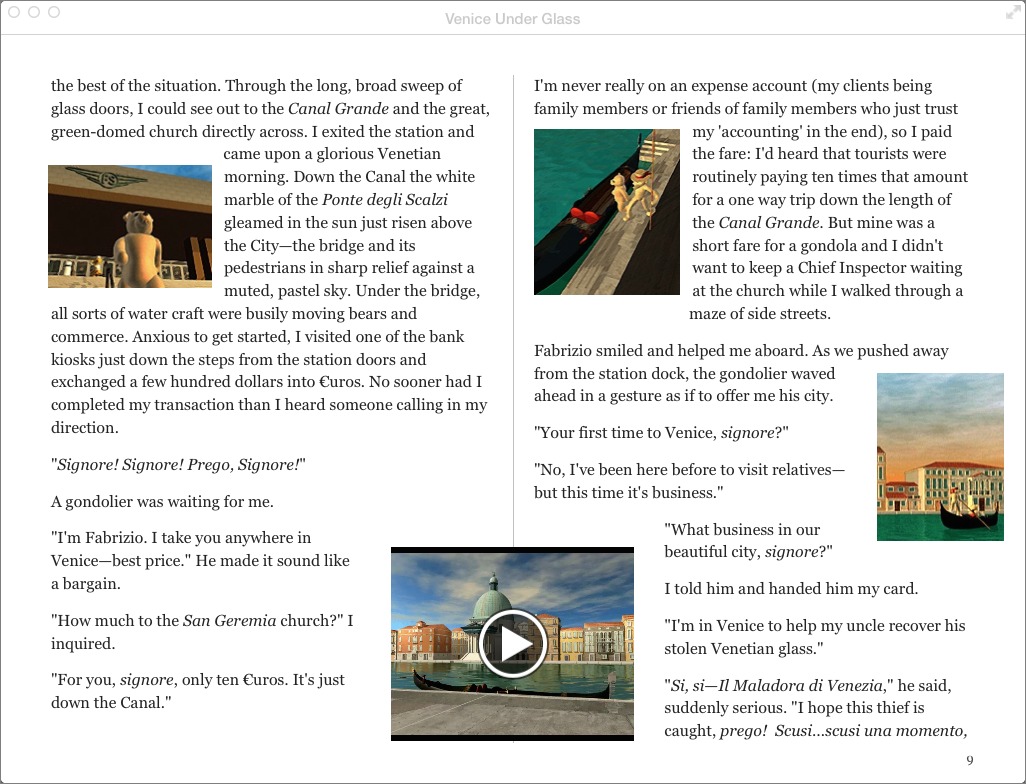 Unfortunately, the mystery at the heart of the book is no mystery to anyone who has ever read more than a half-dozen works in the genre, and the writing is, at best, workmanlike. It reads, in fact, rather like a juvenile genre offering on the level of Nancy Drew or The Hardy Boys, although it does brandish a vocabulary that might challenge many pre-teen readers… until they figure out that a tap can bring up the built-in iBooks dictionary.

In fact, the book largely feels as though the author took his travel journal and photographs from a trip to Venice and wrapped them in a slender mystery, turning the stock characters (possibly based on friends and acquaintances) into stuffed bears as an in-joke: Harper has run a “literate site for bear lovers” for years. Many of the illustrations, in fact, look like travel photographs that he has processed with digital filters for artistic effect. 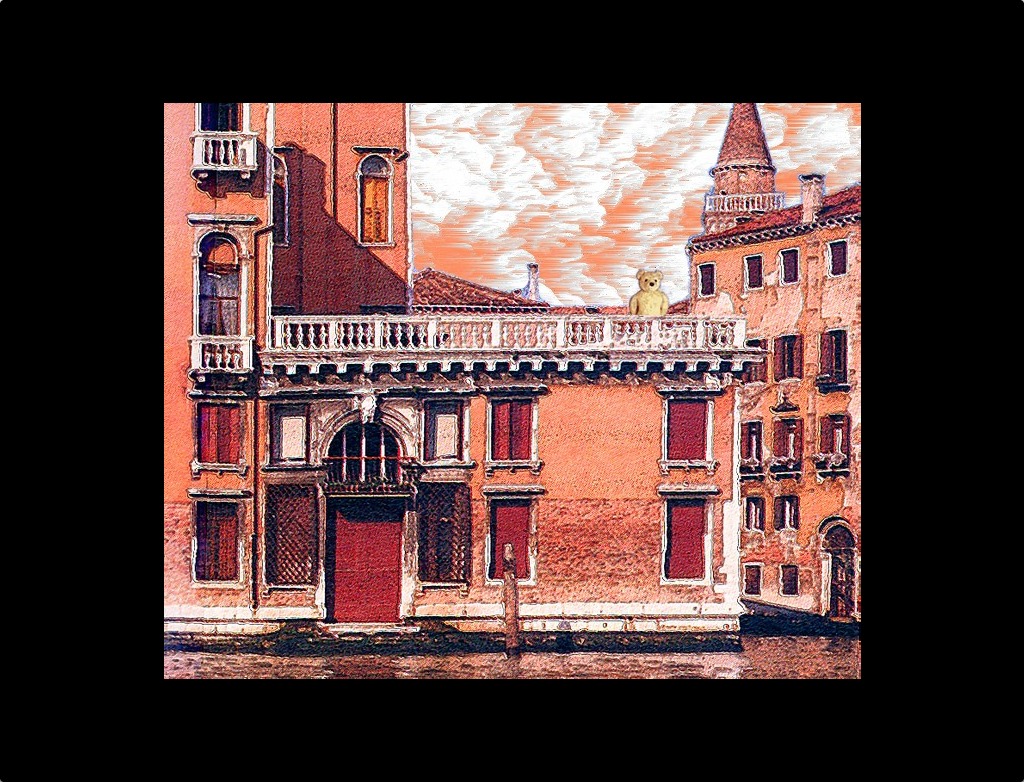 The book also suffers from the bane of many self-published books: the lack of a professional editor to eliminate the typos (for example, straight quotes and “smart” quotes seem interchangeable in this book), stylistic infelicities, and simple errors in wording (“incredulous” does not mean the same thing as “unbelievable” — really, it doesn’t!). An editor might also have helped improve the book’s pacing and structure: the story opens slowly, floating like a gondola adrift on the Grand Canal, and even when it picks up some speed it never
moves faster than a teddy bear toddle.

As an Interactive Ebook — iBooks Author, which Harper used to construct his ebook, provides a variety of well-designed templates, navigational aids, and a collection of “widgets” — interactive tools for presenting video, images, quizzes, 3D models, and other elements — to aid in the construction of digital textbooks. (Let’s not forget that producing interactive textbooks was the original purpose of the software — see “Apple Goes Back to School with iBooks 2, iBooks Author, and iTunes U,” 19 January 2012.)

Many of the app’s templates and widgets are also suitable for non-instructional books, and a number of publishers have taken advantage of that to produce non-textbook ebooks with it. What’s more, because the app was designed to be used by non-publishing professionals — specifically, by teachers, who generally have little available time to master complex professional-level software packages — it has also become a popular choice for authors who want to self-publish attractive ebooks without having to purchase and learn a complex publishing platform. iBooks Author is free and relatively easy to master (and for a little help, see my book, “Take Control of iBooks
Author”).

Harper, fortunately, does not make the mistake that many first-timers do when confronted with an app that provides lots of features: that is, to use and overuse every one of those features just because they are available. Instead, he limits himself mostly to static artwork placed on the page, and occasionally indulges in a short (2-5 second) video. He also makes use of iBooks Author’s Gallery widget to provide samples of artwork featuring Venice between the chapters of the novel. The result is a visually attractive book that doesn’t overwhelm the reader with ornamental overload and extraneous interactive clutter. 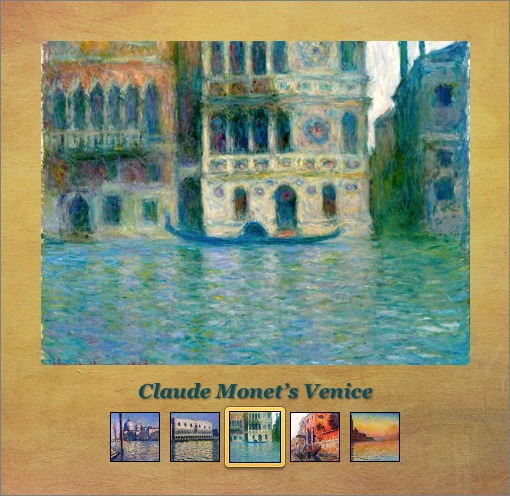 If anything, Harper has been too unambitious in exploiting iBooks Author’s capabilities: for example, at one point he presents a static map of Venice that could have benefitted from iBooks Author’s Interactive Image widget, which would enable the reader to scroll around the map and view it in close detail. 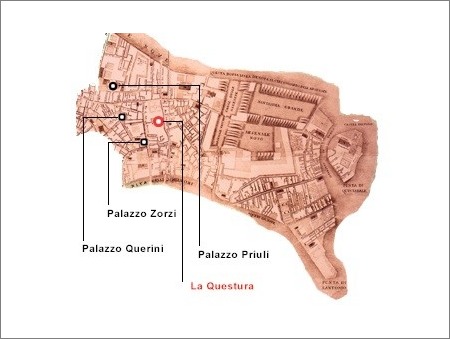 Is It Worth It? — With a price of $2.99, the book is well within the means of almost any potential reader. But, except for the friends and fans of the author, it is not apt to appeal to adult readers who aren’t instantly intrigued by the idea of a cuddly noir novel featuring sentient stuffed animals. It might appeal to a bright pre-teen who wants to learn more about Venice and who would be entertained by teddy bear antics; however, not being a member of that demographic segment, I can only hazard a guess here.

Nonetheless, that such a book exists at all, and is published and available for sale to millions of readers, encourages me: before the advent of tools like iBooks Author and distribution channels like the iBooks Store, such an exercise in self-publishing would have been an expensive undertaking for an author. While “Venice Under Glass” is hardly a masterpiece, it does demonstrate that writers can now self-publish and distribute attractive books without descending into penury.

And that is good news for the aspiring author stuffed inside all of us.