Microsoft’s recent release of OneNote for the Macintosh is notable for a couple of reasons. First, OneNote for Mac fills in Microsoft’s last hole in the OneNote lineup, since it already offers versions of the note-keeping app for Windows, Windows Phone, Android, iPad and iPhone. Second, OneNote is now free on all platforms. Microsoft used to charge as much as $80 for its desktop version on
Windows.

Microsoft can at long last claim the kind of ubiquity that the massively popular note-keeping service Evernote has boasted for years. With a version of OneNote for all mainstream computing platforms – along with a Web-based version, which Evernote also offers – Microsoft can credibly argue that OneNote users have access to their information anywhere and anytime.

This is a boon for individuals or organizations that use a blend of Windows and Macs, or an assortment of Android- and Apple-based mobile gadgetry. In the age of BYOD – bring your own device – at companies large and small, such scenarios are increasingly common.

I’ve long used Evernote – as a Mac and Windows user at home and work – because I never want to be cut off from my information. In Evernote, I store a vital blend of documents, Web clippings, and interview notes related to my reporting day job, along with a variety of personal notes. Constant access is non-negotiable.

That’s why OneNote was never an option for me in the past. Now, with a Mac version, it can be, or at least has the potential to be. I installed it on several Macs, using it side-by-side with Evernote for several weeks.

I was immediately struck by a number of differences between the apps, as well as how the newcomer OneNote for Mac lags far behind the older Evernote in overall capabilities. OneNote is a fine app, especially with recent updates to fill in glaring feature omissions (more on those shortly), but Evernote has it beat at the moment.

OneNote, with a colorful tabbed interface and a humongous control ribbon similar to that of its Windows app, seems focused on creating content within the app. It is brimming with tools for formatting and organizing text to make intricate notes with to-do lists, tables, images embedded on the page, and more – a longtime OneNote claim to fame. 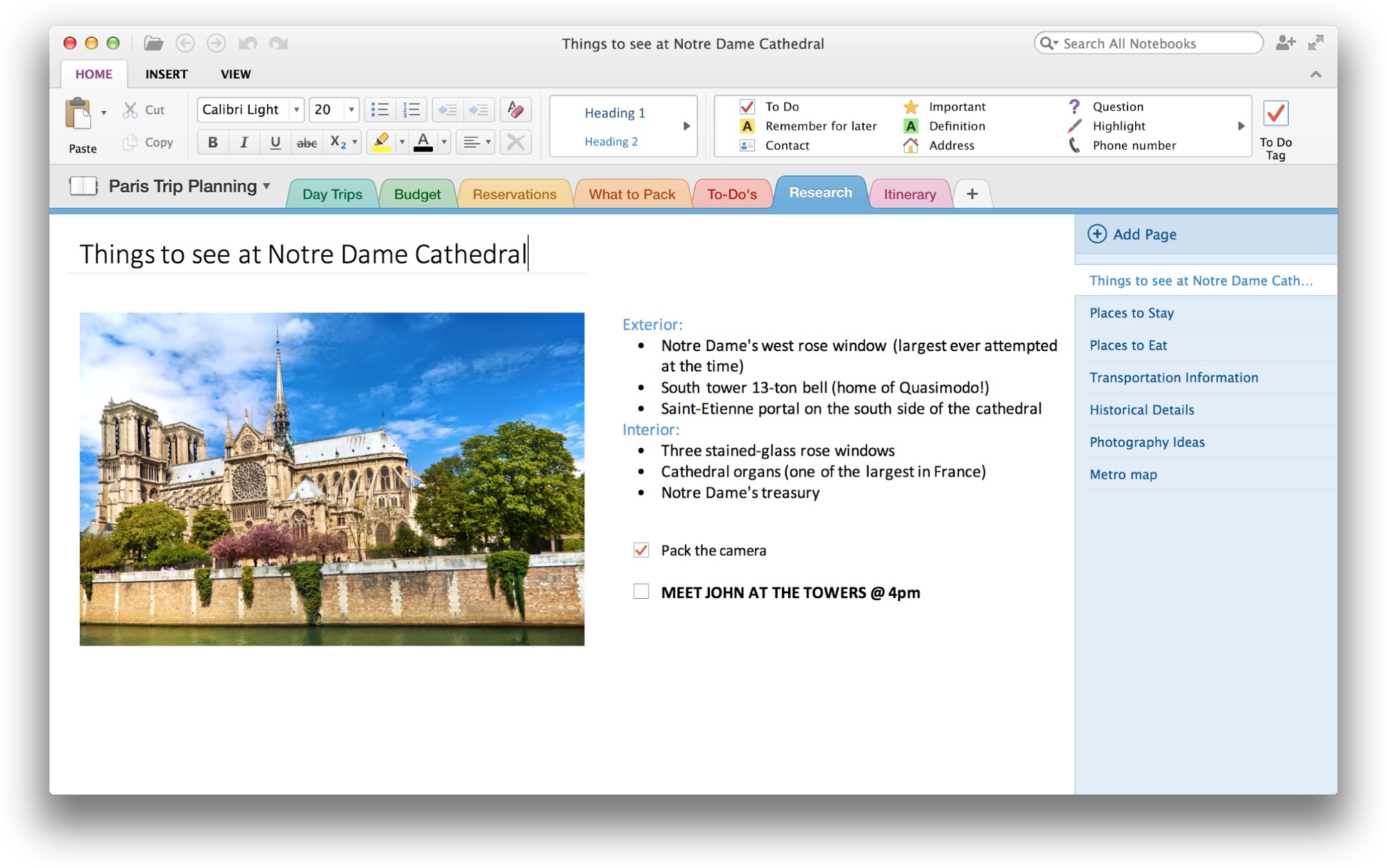 OneNote for the Mac isn’t as good for those wanting to import from outside the app. Web clipping, in particular, is an afterthought. Microsoft’s Web clipper, easily installed on any browser bookmark bar, is a basic, one-click affair with no options for controlling how and in what form clippings are added to OneNote. A clipping ends up in OneNote as a huge screenshot, and that’s it.

In comparison, Evernote excels in the Web-clipping department. When using the Evernote Web Clipper to grab all or part of a Web page, the user is presented with an array of options: save the entirety of a page as HTML, save just the main page text (with or without original formatting), save a screenshot, or create a Web bookmark. 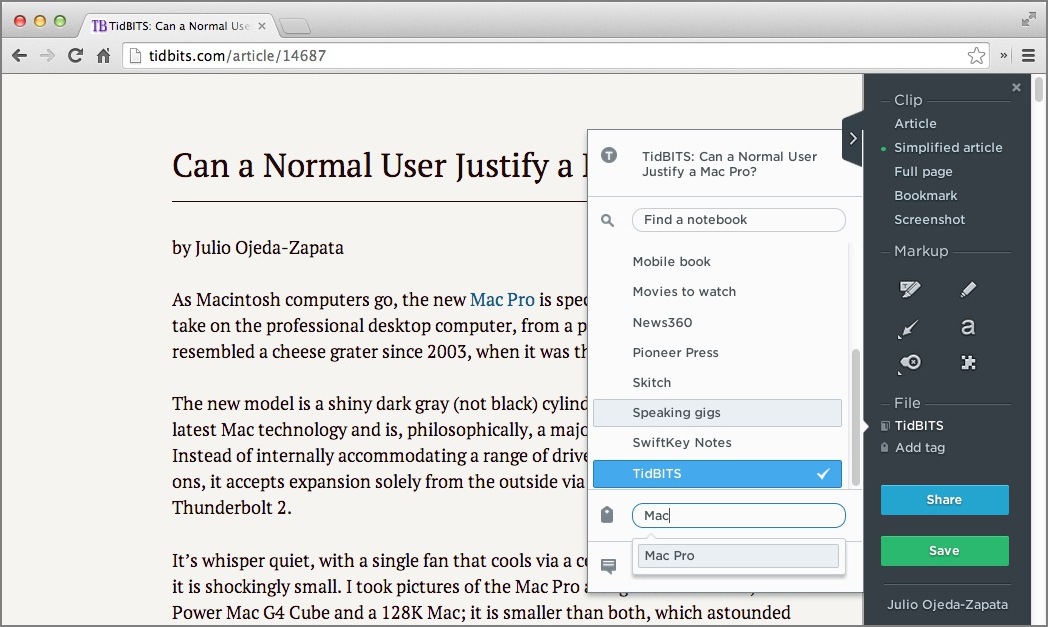 Evernote even lets you mark up clippings with options for highlighting, commenting, cropping, and more, as you can see in the screenshot below. This comes courtesy of an Evernote acquisition, Skitch, which is a standalone app for annotating documents and picture files. OneNote doesn’t incorporate such functionality into its Web clipping feature. 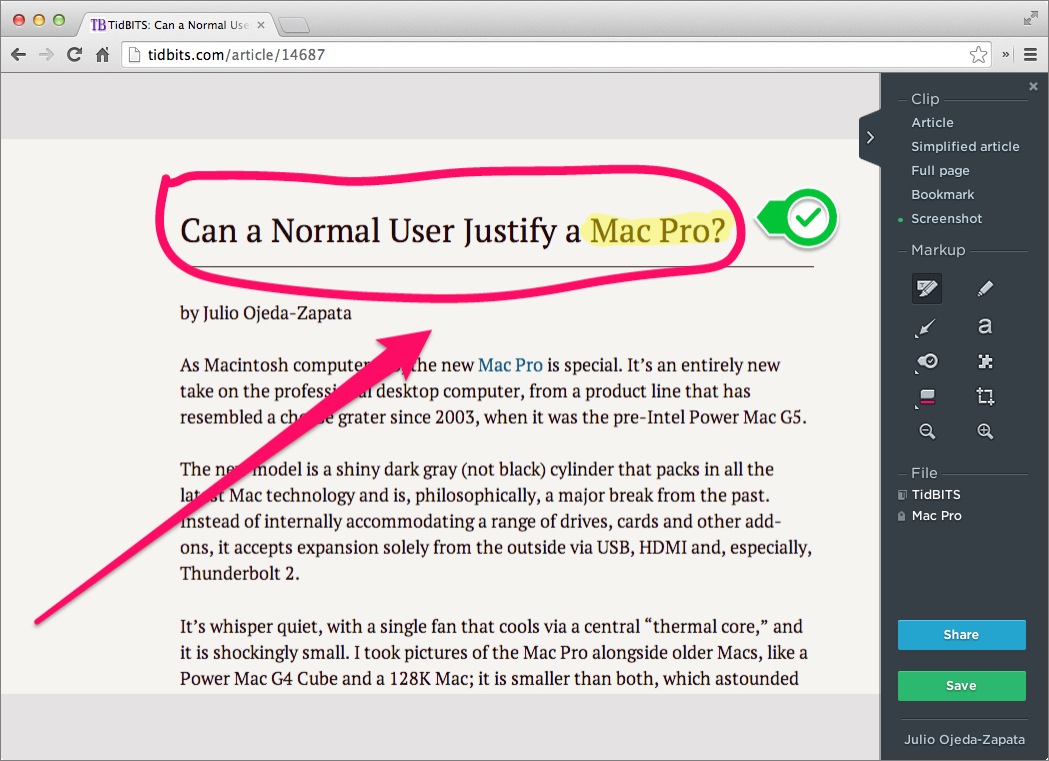 OneNote and Evernote both organize information into notebooks, which are terrific for keeping notes related to office affairs and personal matters separate. At this point, though, the two diverge in significant ways.

Within OneNote notebooks, users can further segment information into sections denoted by a series of color-coded tabs along the top of the app. Sections are themselves split up into a series of pages, which can consist of internally created notes, Web clippings and the like. 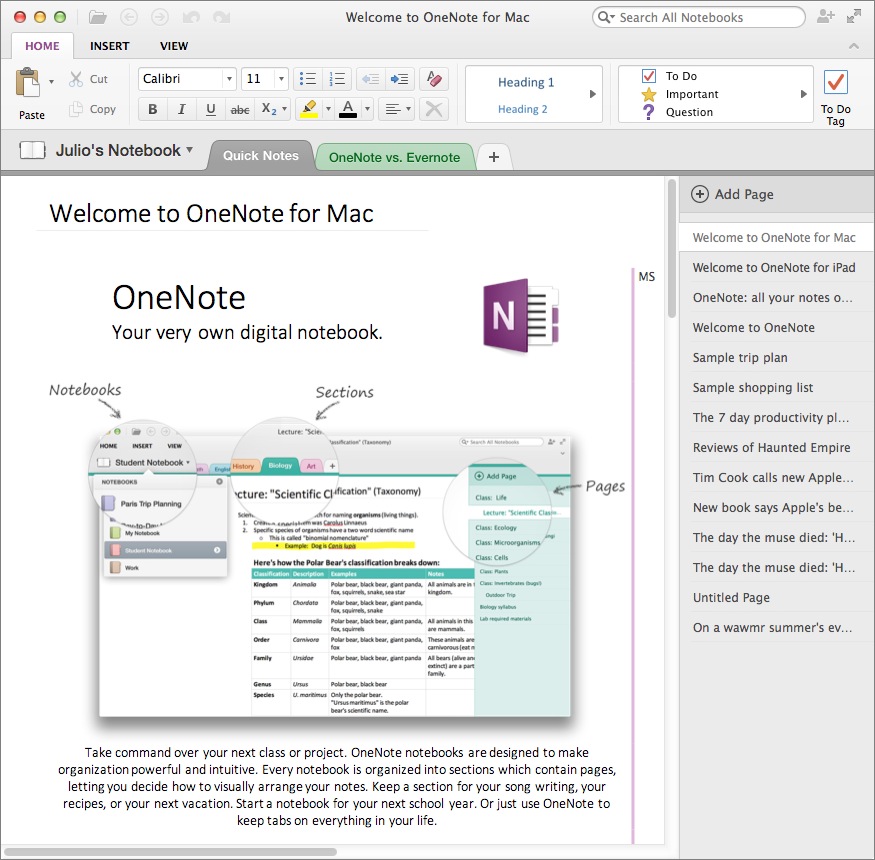 Evernote, instead of tabbed sections, relies on tags, much like those in OS X 10.9 Mavericks. Tags are basically keywords for grouping notes. A particular note can have many tags, and many notes can share a tag. This makes for a flexible organizing system.

I keep my current tags pinned to the upper left of Evernote’s app window, and I can locate older tags in the app’s neatly organized tag section. 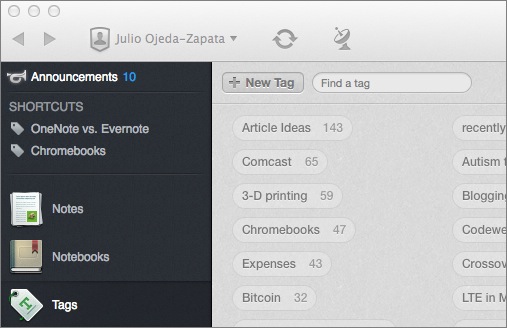 Evernote’s tags are particularly useful when I clip Web pages. At the moment I’m clipping a page, I can select a notebook, and assign one or more tags within that notebook. This places the clipping exactly where I want it. OneNote doesn’t provide as much flexibility, offering only a default destination for Web clippings. Users must then manually reorganize their just-imported content as they see fit.

I think Evernote’s tags scale better than OneNote’s sections, which quickly clutter up a notebook and make it difficult to navigate.

OneNote does have tags of a different sort – icons or emojis, really, for adorning lists to give them at-a-glance themes for easier reference. 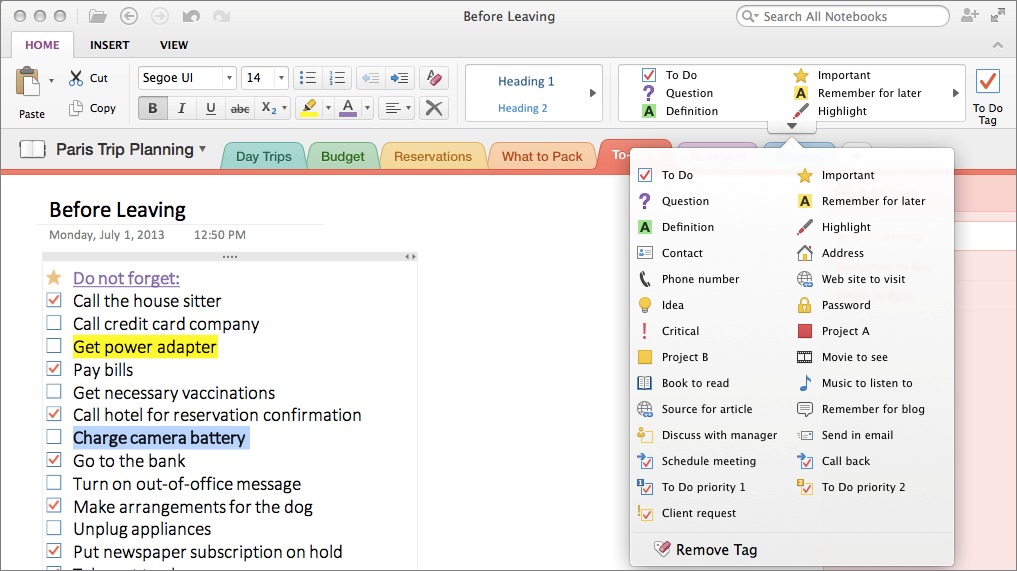 Evernote irks me at times because its Mac app feels bloated and ponderous, with occasionally lengthy waits when it needs to sync data from the cloud. OneNote feels fast, but that may be deceptive because it currently contains only a fraction of the data I have stored in Evernote; I have no idea how it will behave when loaded with hundreds or thousands of notes (I have 2,623 notes in Evernote now).

OneNote earlier this month received several updates (some of which fill glaring holes). New features include printing, hyperlinking, dragging and dropping of images into pages, copying and pasting of formatted text, saving a note as a PDF or sending it via email (via either standard OS X controls, or OneNote’s own “Email Page as PDF” option), and a Format Painter feature found in other Office apps for copying the format of text in one part of your notes and applying it to other text.

All the features appear to work mostly as advertised, though I noticed an occasional tendency to cut off portions of pages when saving them as PDFs.

OneNote is compatible with a number of third-party apps and services, which has long been an Evernote claim to fame. OneNote has about a dozen such partners, including news reading apps such as Feedly and Weave, and even Internet automation services like IFTTT and Zapier (see “IFTTT Automates the Internet Now, but What Comes Next?,” 20 December 2013).

But Evernote works with many times more apps and services (including dozens in the iPad and iPhone categories alone). Microsoft has released a developer API, so more OneNote choices are likely in the future.

Both OneNote and Evernote are being built into document scanners for immediate archiving of freshly recorded images with no computers in the middle. That’s helpful for anyone looking for a tool to act as the hub of a paperless office — Joe Kissell covers that territory comprehensively in “Take Control of Your Paperless Office, Second Edition.”

Support for OneNote among Mac apps is entirely lacking. In comparison, Mac apps that support Evernote include the Pocket bookmarking service, Smile’s PDFpen, the Alfred launcher, and the Postbox email client. You can even “print” to Evernote directly from the Mac OS X Print dialog.

Mac users who avail themselves of the new desktop OneNote will, invariably, want to pull up their data on iOS devices and on the Web, as well, and I have good news on that front: Microsoft’s iOS apps are attractive and capable (matching the recently released Microsoft Word, Excel and PowerPoint apps in look and feel — see “Office for iPad: A Deep Look,” 3 April 2014). OneNote’s Web version is almost a feature-by-feature replica (in a good way) of the desktop apps for Mac and Windows. 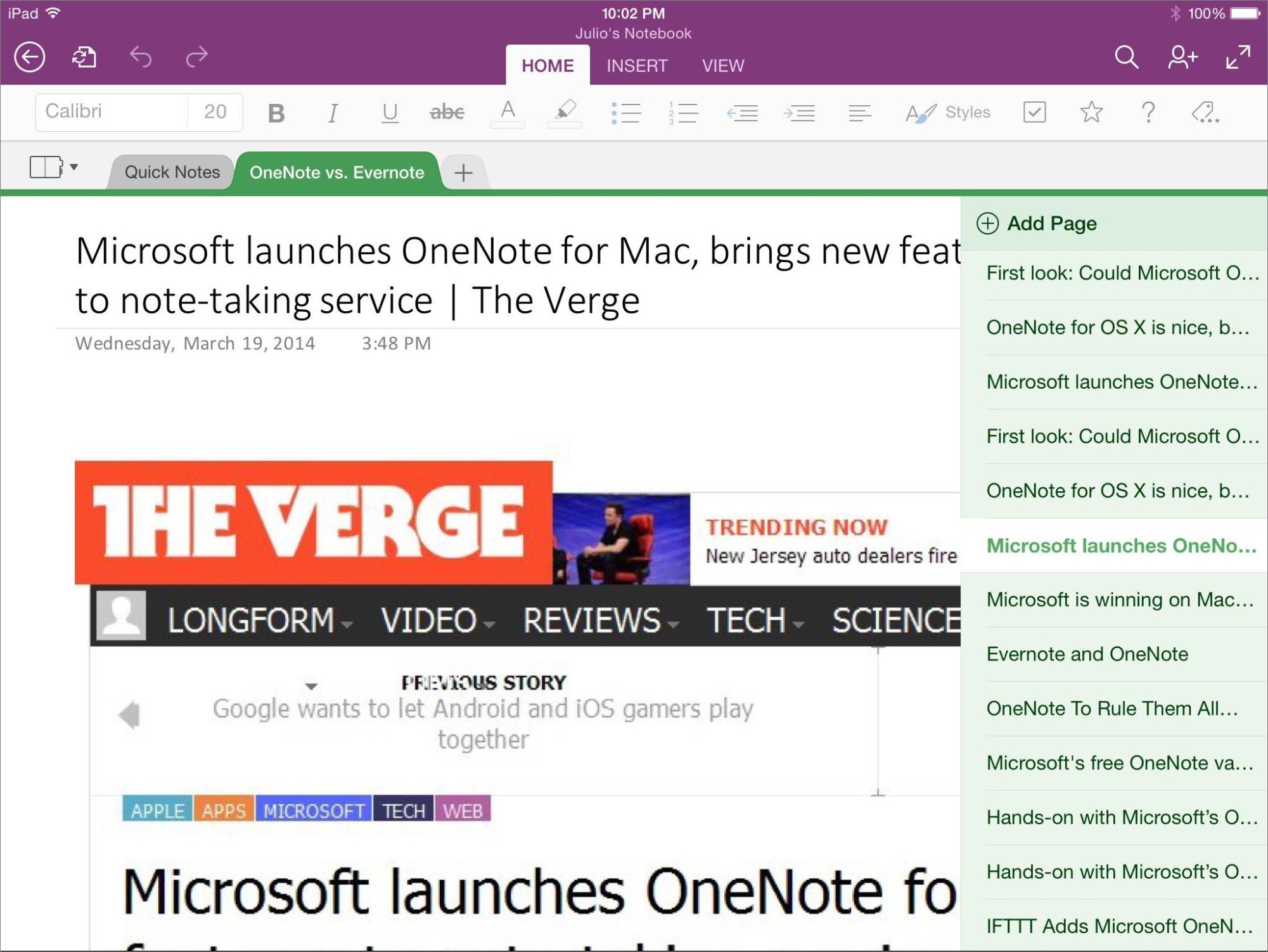 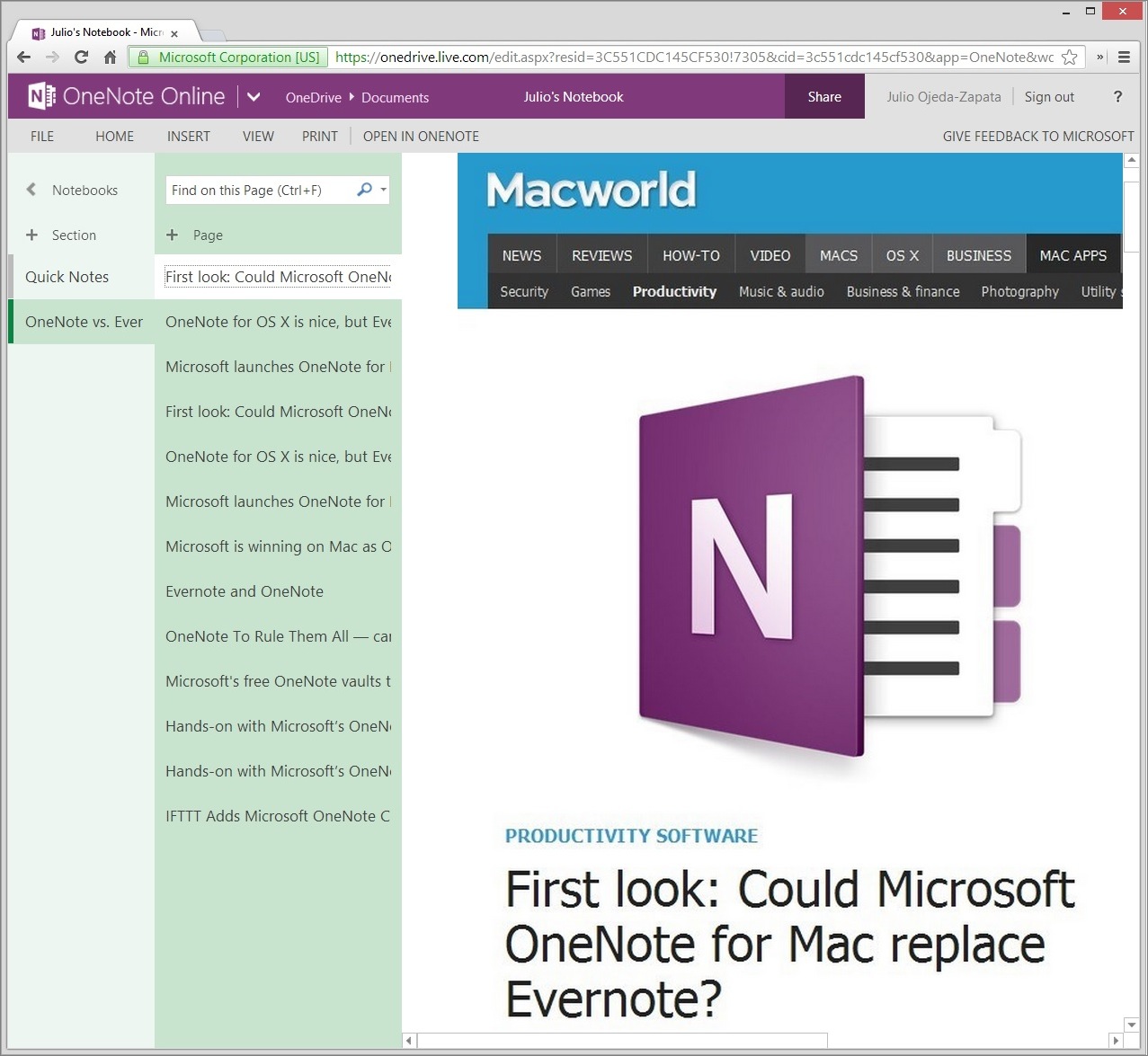 OneNote for the iPhone earlier this month snagged a feature the iPad and Windows Phone 8 versions already have: Office Lens. It’s handy for taking photos of whiteboard notes or work receipts since these can be edited for greater readability. In addition, printed text in the pictures gets read via optical character recognition for later
keyword searches.

Evernote’s iOS apps are more refined and feature-rich since they have been around longer. I find Evernote’s Web app ugly (perhaps it’s a matter of taste), but it offers convenient, reliable access to notebooks, tags and the like.

Both OneNote and Evernote also offer excellent apps for Windows 8 (in both desktop and touch-centric Start Screen variants), Windows Phone, and Android.

In other words, OneNote and Evernote are now pretty much neck-and-neck in the cross-platform-compatibility department.

Only Evernote offers a paid level ($5 per month, or $45 per year) with offline access to notebooks, previous versions of notes, collaborative editing of notes with others, Passcode Lock on mobile devices, increased storage, PDF annotating (you can only annotate images, not PDFs, in the free version) and OCR indexing of text within scans, images, and PDFs.

So which app should you choose? If you’re already using OneNote elsewhere, such as in a Microsoft Office environment at work, you’ll likely be happy to add the Mac version to your toolkit. If you’re already using Evernote, the appearance of OneNote isn’t likely to encourage you to jump ship, and if you’re looking to get started with a note-keeping app, I have to recommend Evernote.

Although OneNote has basic features for taking and organizing notes, Evernote is simply more full-featured. Sure, I could use OneNote to type notes while conducting phone interviews for my articles, and it works fine for attaching photos from my smartphone to notes for later reference, but Evernote handles those simple tasks with aplomb and does so much more, particularly with Web clips and tagging.

So as one who clips Web content continually during the course of a work week, and keeps those clips meticulously organized, I can’t imagine giving up Evernote for the comparatively weak OneNote.