I, like many comic book fans, have sunk a lot of money into ComiXology, the industry’s unified digital comic book store. But after Amazon purchased ComiXology and removed in-app purchases (see “Explaining the ComiXology In-app Purchase Debacle,” 3 May 2014), I had a sobering thought: what happens if ComiXology were to close shop? All the comics I’ve “purchased” will be lost forever, locked behind the gates of ComiXology’s digital rights management. Fundamentally, that’s the problem with buying DRM-encumbered content: you never truly buy it — it’s more of an extended rental. If the hardware or software that’s available to read the
file becomes incompatible with the DRM, you can’t view the content. Plus, DRM flies in the face of the spirit of collecting comic books. What’s the joy of collecting something you’ll never own?

Fortunately, a few progressive publishers are leading the way in offering digital comics that you can own, and the iPad has the perfect app for enjoying them.

“Comic book archive” isn’t truly a format itself; instead, it is a mix of archive and imaging formats. The name of the “format” indicates the form of compression used to create the file, and it is the filename extension for the file. For example, .cbr is compressed with RAR, and .cbz is zipped. You may also encounter the much rarer .cbt and .cb7 comic book archives, which are compressed with tar and 7z, respectively. Most of the time, you don’t have to think about these things, as the reader app will handle the details.

If you have a choice between PDF and a comic book archive, I suggest the latter, as it will likely provide the best experience. However, with the iPad reader app I’m going to recommend, the difference is negligible.

A few comics come in EPUB format, but I advise against it. It’s a poor format for comic books, and I’ve always been disappointed in the experience.

Where to Obtain DRM-free Comics — The bad news is that the big two comic book publishers, Marvel and DC, don’t currently offer DRM-free comics, so their characters and plot lines are out. The good news is that many other quality publishers are offering DRM-free editions, and by exploring them you can broaden your horizons. I’ve discovered some great new titles that I otherwise wouldn’t have bothered with.

There are many, many more small publishers that offer DRM-free comic books. Fortunately, the developer of my favorite comic viewer can point you to more…

How to Read DRM-free Comics — Numerous apps on all platforms can read PDFs and comic book archives, but my favorite is the free Chunky Reader for iPad. Here are some reasons why: 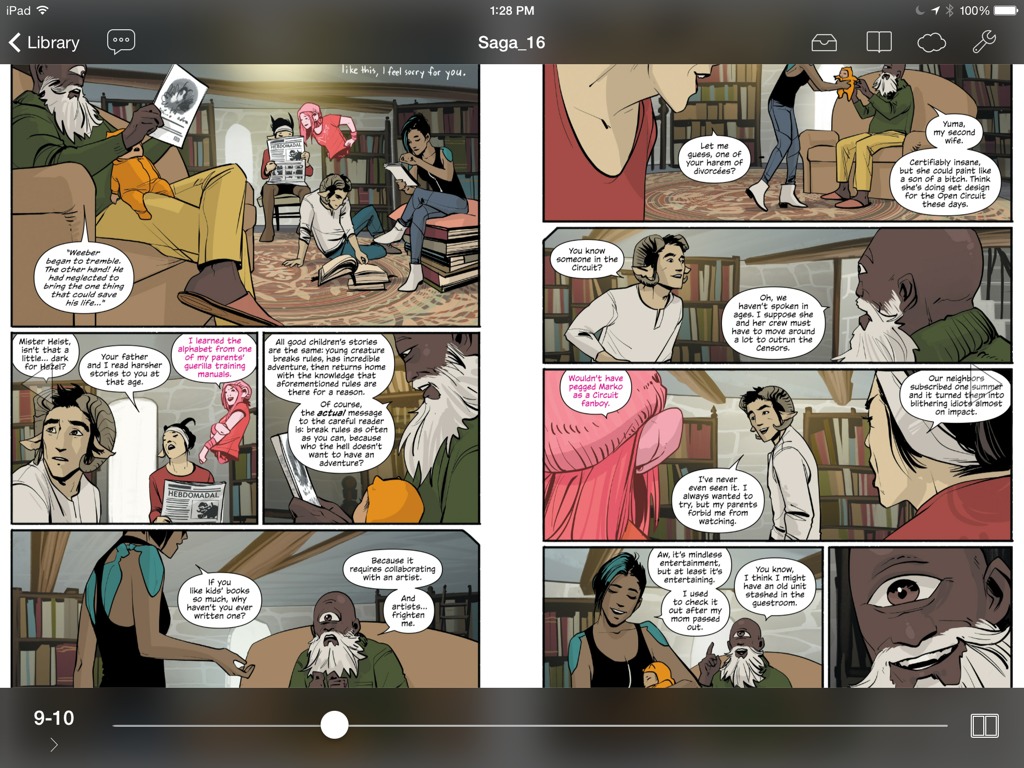 But my favorite Chunky Reader feature is the capability to clip a portion of a page and share it. I haven’t seen another reader that can do that, and it’s perfect for whenever I stumble across something amusing that I want to share with a friend or on Twitter. 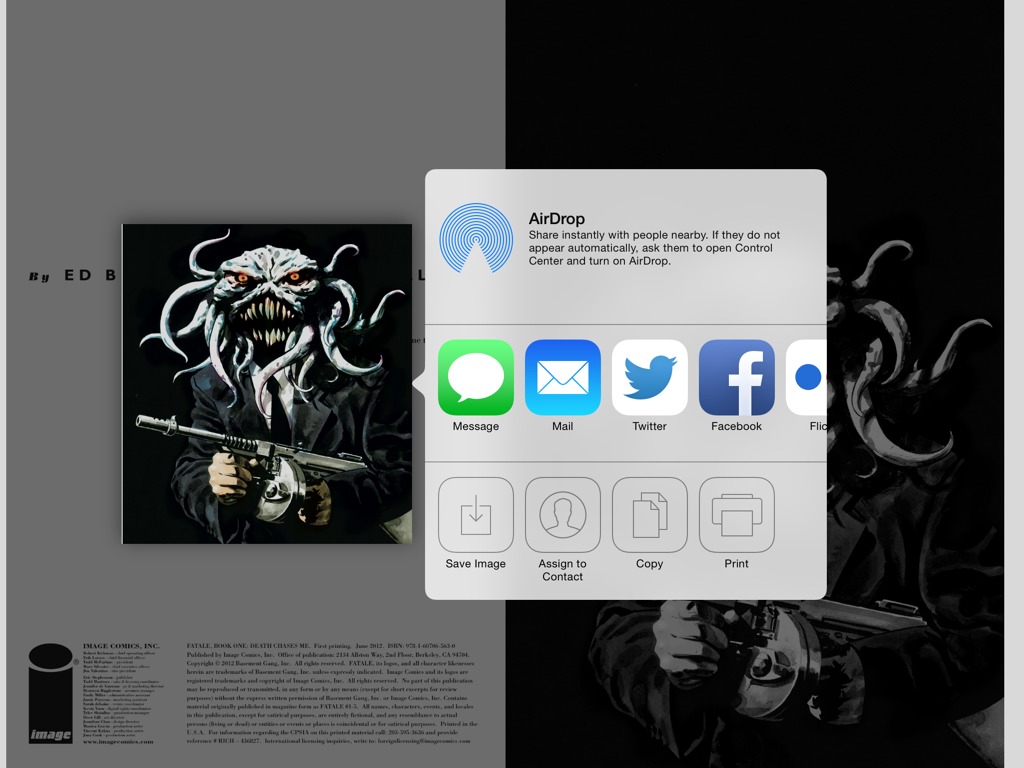 If you purchase the $2.99 Pro Upgrade, you gain the capability to load comics from a local shared folder, FTP or SFTP servers, or even a Web server built into the app. But really, if you like Chunky Reader, you should buy the upgrade anyway to support developer Michael Ferenduros. I did, because I hope Chunky Reader stays around for a long time.

And here’s a little cloud storage tip for you comic lovers. You may be tempted to keep your comics on Dropbox, but that will quickly clog up your 2 GB of free space. However, I got a free 50 GB of space from Box during a promotion a few years ago that I’ve never used, so that’s where I’m stashing my comics (even now, they offer a generous 10 GB for free). I’ve set up a Hazel action that automatically moves .cbz or .cbr files from my Downloads folder to my Box folder.

Finally, you may be saying, “Hey Josh, you missed my favorite publisher of DRM-free comic books!” OK, I probably did, but there’s a list on the Chunky Reader home page. If you have a favorite that we’ve missed, let us know in the comments.

Support the Little Guys — I, like many comic fans, feel betrayed by ComiXology. But ultimately, it’s a business, and its leaders felt that selling to Amazon was the right thing to do. As comic fans, it’s our problem that we invested our money in a locked-up system that could vanish overnight and take our collections with it.

But moreover, while I love comics, I’m increasingly less enthralled with what’s coming out of the big publishers — Marvel in particular. Over the years, they’ve shifted toward mega-event crossovers with nonsensical plots that are increasingly harder to follow. Even Andy Ihnatko, in a recent episode of The Ihnatko Almanac podcast, confessed that he’s losing interest in comics for that and other reasons.

Discovering the titles coming out of publishers like Image and Valiant has been a breath of fresh air. Their stories have fresh ideas, fully developed characters, and coherent plot lines, and don’t insult my intelligence. Not only that, but these guys trust me, the reader, enough to let me own a digital copy of a comic. For those reasons, I’m excited to give these companies my money.

That’s not to say that I’ve stopped reading Marvel, thanks to Marvel Unlimited, which gives me access to their extensive back catalog for a flat annual fee. (Marvel also has some good new titles, with Matt Fraction’s superb Hawkeye title as an example). But my interest in “buying” single issues that could vanish at any time has faded. At least with a subscription service, both parties are honest about the terms of ownership.

Comments About FunBITS: The World of DRM-free Digital Comic Books