One of the most reviled changes in OS X 10.9 Mavericks was the removal of local contact and calendar syncing between a Mac and iOS devices in iTunes. Instead, Apple required all iOS users who wanted to sync such data to use a network-based solution like iCloud, CardDAV and CalDAV, or Exchange ActiveSync. This came about as a result of Apple dropping the SyncServices framework in Mavericks, and it made users unhappy for two reasons.

First was the awareness that one’s personal information was being stored in the cloud, made all the more unpopular by the revelations of domestic NSA spying, and second was the irritation of Apple fixing something that for many people wasn’t broken. That’s not to say that SyncServices didn’t have problems, because it did, but lots of people still used it successfully.

Six months after the October 2013 release of Mavericks, Apple has brought back local syncing of contacts and calendars, in OS X 10.9.3 and iTunes 11.2. Although both are required, the visible changes appear only in iTunes itself, where the Info button and associated pane has returned when you’ve selected an iOS device. Syncing operates over both USB and Wi-Fi.

Before you enable local syncing, be sure to disable iCloud or any other network sync source that could result in confusing duplicates. On your iOS device, go to Settings > iCloud, and turn off Contacts and Calendars. Be certain to remove contacts and calendars on the device. Then, in iTunes, select your iOS device in the sidebar or header bar, click Info, and select Sync Contacts and/or Sync Calendars. You can choose between syncing all contacts or calendars, or only selected ones, and if you have crufty contacts or calendar events sticking around on your device, you can select Contacts and/or Calendars under “Replace information on this iPad” to have the Mac clear data on the device before syncing on only the next connection. 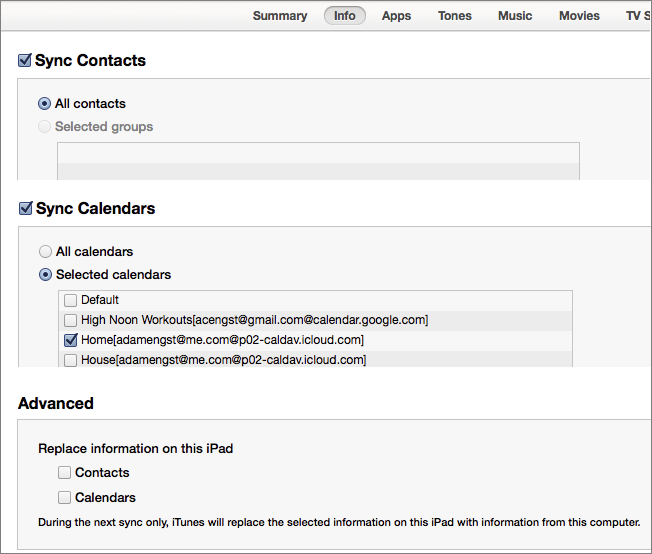 It’s important to remember that you’ll lose automatic push synchronization when you switch to this system, in case you’ve become accustomed to it while using iCloud or another network-based solution. USB syncing takes place only when you plug your device into your Mac and launch iTunes. For Wi-Fi syncing, iTunes must be running, the “Sync with this iPad over Wi-Fi” checkbox must be selected in the Summary pane, and the device must be on the same Wi-Fi network as your Mac. Wi-Fi syncs take place automatically whenever those
conditions are met and you plug the iOS device into power; you can also invoke them manually from either iTunes or the device, under Settings > General > iTunes Wi-Fi Sync.

In my testing, I found both contact and calendar syncing fairly flaky. When syncing contacts, only a small number of contacts, possibly those created somewhat recently, appeared on the iPad, and iTunes never gave me the option to choose specific groups to sync. With calendars, I could select particular calendars, but they weren’t at all organized, with local, iCloud, and Google calendars intermixed, and with iCloud and Google calendars identified with ugly addresses, as in [[email protected]@p02.caldav.icloud.com]. I also had some trouble getting the initial sync, which gave me no choice about including all calendars, to replace them on a subsequent sync. I eventually got calendars straightened out
after a number of tries, but I never managed to sync all my contacts.

My advice? Give it a try if you’re bothered by network-based syncing of contacts and calendars, but don’t burn any bridges, since you may need to revert if my experience is representative.