Rumors are flying that Apple is lining up to purchase Beats Electronics (for background, check out “Why Would Apple Drop $3.2 Billion on Beats?,” 9 May 2014), spurring endless speculation as to why. Beats has a number of things to offer Apple:

After the rumored deal was announced, I decided to take Beats Music for a spin, especially since it will likely vanish if Apple does acquire Beats.

Beats Music launched in January 2014 out of the ashes of the streaming service MOG, which Beats purchased in 2012. It shares many features with competitors like Spotify, Google Play Music (see “FunBITS: Examining Google Play Music,” 22 November 2013), and Rdio: $9.99 per month, millions of songs, iOS apps, some sort of desktop client, playlists, social, blah, blah, blah.

Instead of boring you with all the typical music streaming things Beats Music does, I’d like to focus on the interesting things that set it apart from the competition.

Better Quality Tracks — When it comes to music streaming services, one big way they differ is in the bit rate — and thus the quality — of the tracks offered. For comparison, iTunes offers 256 Kbps AAC files, which are roughly equivalent to 320 Kbps MP3s. Spotify offers up to 320 Kbps Ogg Vorbis-formatted tracks to paid subscribers, but non-paying users are limited to 160 kbps Ogg Vorbis. Google Play also offers up to 320 Kbps, but it’s unknown how many tracks are encoded at that
bit rate. Rdio has only up to 192 Kbps, though it’s working on upgrading that to 320 Kbps AAC.

Almost every track on Beats Music is a 320 Kbps MP3, with a “small minority” of tracks available at 256 Kbps. However, if you don’t want to burn through your mobile data cap on an iPhone, there’s an option to stream at 64 Kbps HE-AAC (High-Efficiency Advanced Audio Coding). In the iOS app, you can find that under Settings > Sound Quality & Downloads, and then set Stream High Quality Music either to Never or Only on WiFi. 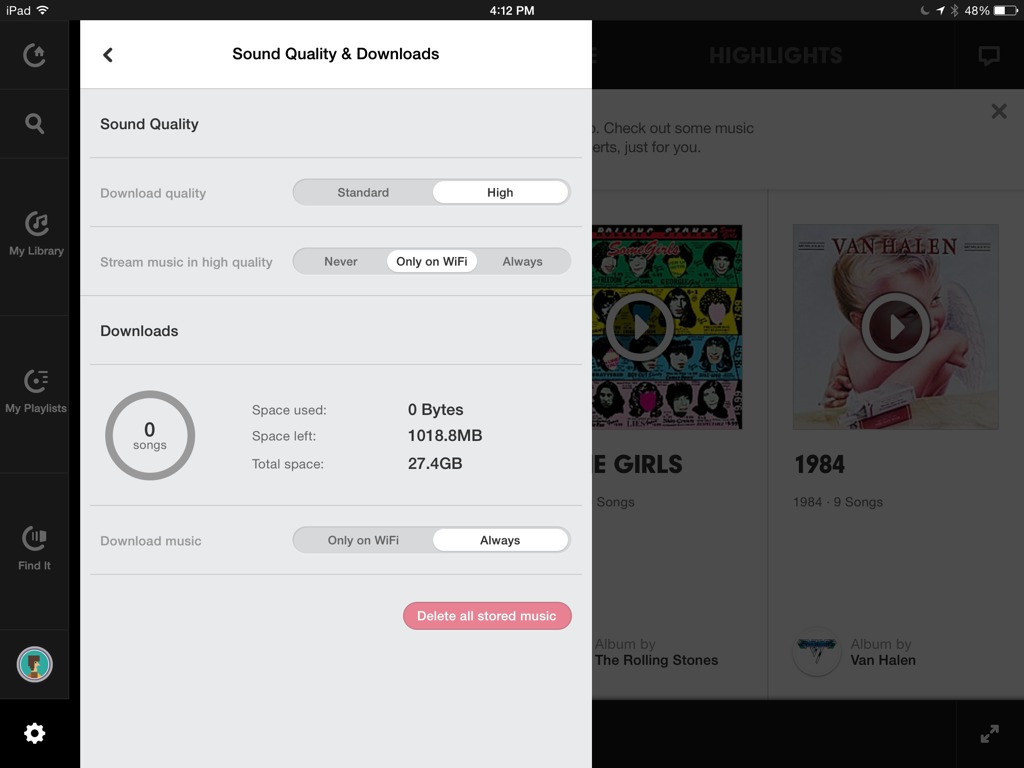 I’m no audiophile, but I can notice a clear difference between Beats and the other services, even on mediocre equipment. The quality is better and more consistent than on most other services, and the difference really shows when I listen on my Sony MDR-V6 headphones. (Though, admittedly, this is completely subjective.)

The other unadvertised difference I’ve noticed is that Beats doesn’t have a lot of filler tracks, like 30-second samples of unlicensed songs or dozens of amateur covers of “Royals.” Beats has “only” 20 million tracks compared to Rdio’s 25 million, but if most of those extra 5 million are junk, then I’d rather not have to sort through them.

Close Ties With Artists — Beats Music is unique in that it has closer ties to recording artists than the competition. Dre and Iovine brought on Nine Inch Nails frontman Trent Reznor as chief creative officer to oversee the design of Beats Music.

But Beats tries to also do more for the artists themselves, promising higher royalties than its competitors and paying big and indie labels equal royalty rates. Unfortunately, in practice, Beats has only around 111,000 subscribers, meaning actual royalties paid to artists are quite low. Despite that, I appreciate that the company is trying harder to keep its artists fed than most streaming services, which pay peanuts (to be specific, Spotify pays an average of $0.007 per play).

The Personal Touch — Something that has been missing from existing streaming services, and for the past several years of much mainstream terrestrial radio, is human curation. While most competing services depend on algorithms and social recommendations, Beats employees a team of editors to construct playlists and recommendations. It has also partnered with a number of music publications to provide curated playlists.

In my opinion, this is the crown jewel of Beats Music. My problem with most streaming services is that I often don’t have a clue what to listen to. Sure, they’ll show me what’s popular, but that’s not necessarily where my tastes lie. Likewise, algorithmic recommendations tend to generate uninspiring mishmashes of songs. “Hey, we noticed that you like metal and country, so here’s a playlist with Marilyn Manson, Toby Keith, Beck, and Nickelback!” Thanks, but no. I like strawberries, mustard, and eggs, but I wouldn’t make a sandwich out of them.

The human touch does wonders for music discovery. One of my favorite things about Beats is that it has “Intro to” playlists for a number of artists. Let’s say you’ve never heard St. Vincent, but want to know what she’s all about — bring up the Intro to St. Vincent playlist, which features a sampling of her best and most popular tracks. 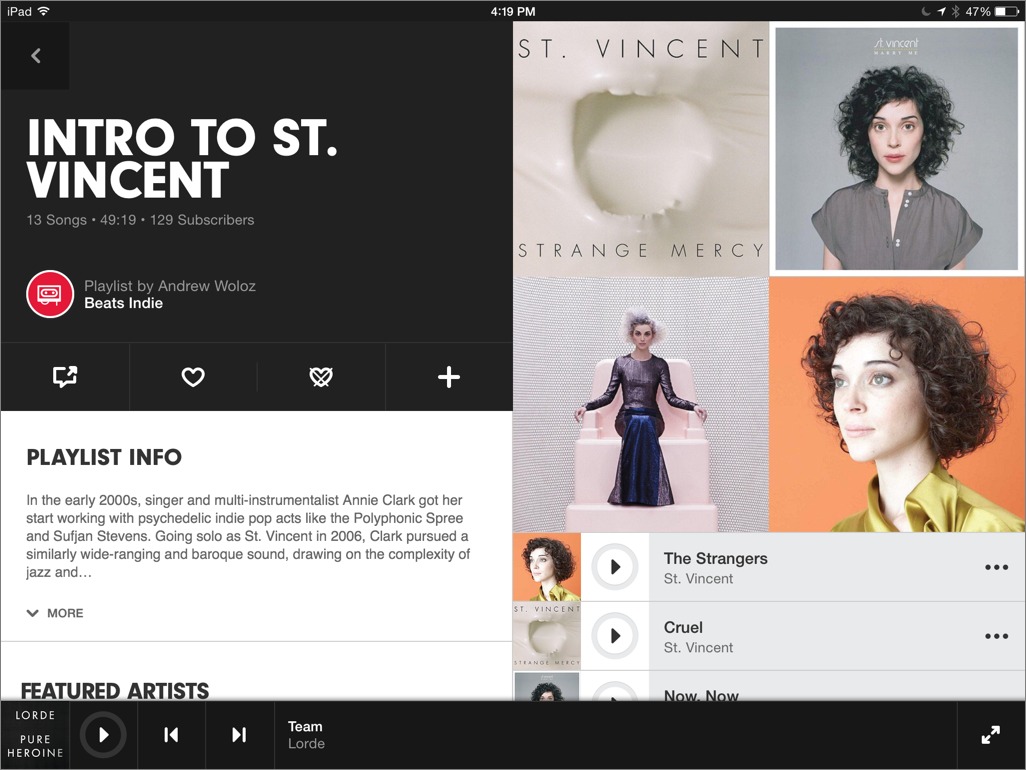 The Just for You Section presents albums and playlists Beats thinks you’ll like. My tastes in music tend toward rock from the 1980s and 1990s, and that’s why I’ve become a fan of radio veteran Suzy Cole and her Beats playlists, which dominate my recommendations. She cranks out a bunch of them, and they’re all great — from Melancholy Hair Metal to Nirvana: Live. You might remember that Nine Inch Nails, Queens of the Stone Age, and Dave Grohl were brought out to close out
the 2014 Grammys, but were abruptly cut off. In response, Suzy created a playlist called “2014 Grammy Finale: The Songs That Come Next,” composed of tracks she thinks they would have performed if they had more time. 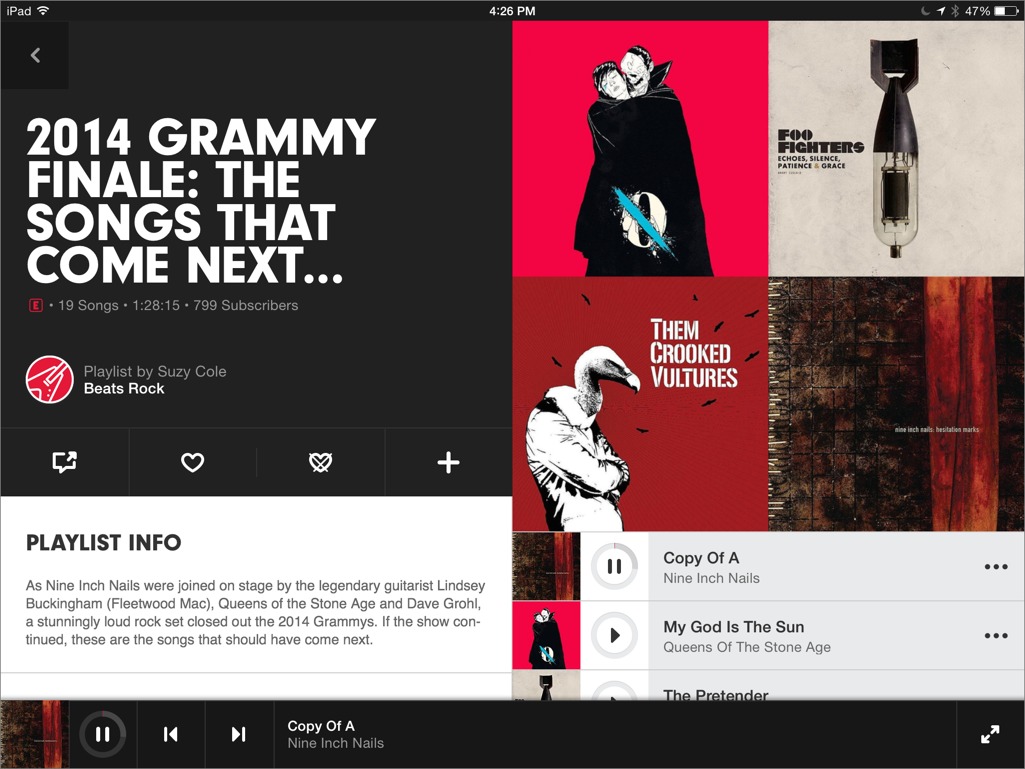 Another example of the kinds of cool things Beats does with playlists is that the editors often create playlists in response to recent events. When the surrealist artist H.R. Giger recently passed away (he was most famous for designing the creature in the Alien movies), Decibel Magazine created a playlist to memorialize him, with appropriately creepy tracks.

What I love about Beats’ curation is that each playlist is based on a narrative. They feel less like random mishmashes of songs and more like magazine articles. The editors at Beats aren’t tossing musical spaghetti at you, hoping it’ll stick, but instead taking you on an auditory tour of discovery.

But that doesn’t mean that Beats doesn’t have computer-generated playlists. It just goes about them in a different way.

The Sentence — Perhaps the most distinctive feature of Beats Music is The Sentence, which is a unique way of constructing automated playlists.

It works like Mad Libs. You’re given a sentence, “I’M [BLANK] & FEEL LIKE [BLANK] WITH [BLANK] TO [BLANK],” which you then fill in by choosing from a list of answers. So you can create sentences like “I’M [ON A ROOFTOP] & FEEL LIKE [TAKING A SELFIE] WITH [MY THOUGHTS] TO [HAIR METAL]” or “I’M [IN THE CLUB] & FEEL LIKE [SAVING THE WORLD] WITH [NO REGRETS] TO [INDIE].” 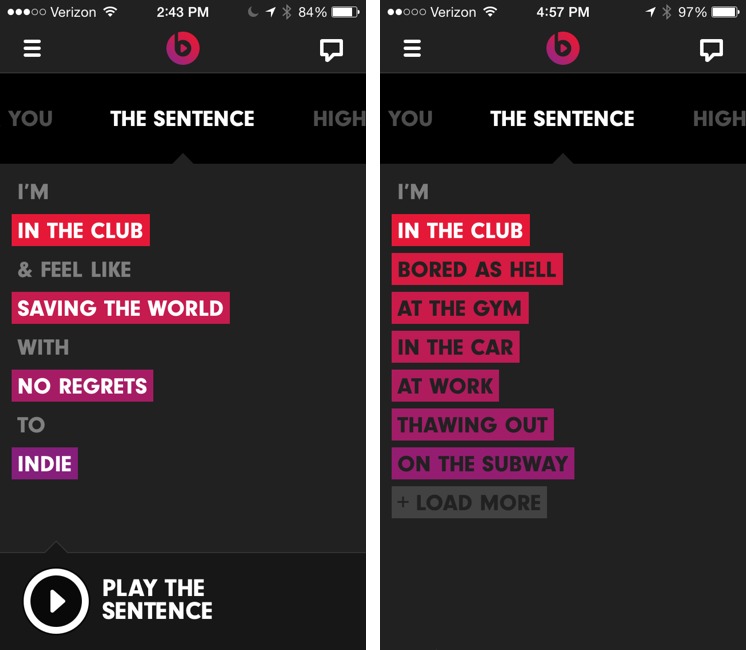 Is this a better way to make playlists? I don’t know, but it is fun, and it does a good job of letting me define my mood.

Dropping the Beats — With so many cool features, why does Beats have so few subscribers? I have a few theories.

And it’s too bad, because Beats Music is an interesting product. The human curation is magical and something I wish were more prevalent. If you’re looking for new tunes, I recommend signing up for the 7-day free trial. If you’re an AT&T Wireless customer, you’re eligible for a 3-month free trial.

After giving Beats Music a thorough spin, I can see more clearly why Apple might want to buy it. It’s a service that aims to bring a human element to technology, with a killer mobile interface, and deep cultural connections to music, all of which are things Apple values.