Apple updated iTunes last week to version 11.2 with improvements to the Podcasts user interface and a return of local contact and calendar syncing between a Mac and iOS devices (the latter of which Adam Engst covers in “Local Contact/Calendar Syncing Returns in iTunes 11.2,” 15 May 2014). Unfortunately, Apple had to issue a second update with iTunes 11.2.1, which fixed a bug that caused some systems to hide the /Users folder.

While fingers initially pointed to the concurrently released OS X 10.9.3 Mavericks as the culprit (see “10.9.3 Restores Local Contact/Calendar Sync, Improves 4K Support,” 15 May 2014), it turned out that it was actually iTunes 11.2, in cahoots with Find My Mac, as discovered by Dave Hamilton at The Mac Observer. The problem was in fact even more serious, since the iTunes 11.2 update also set the /Users folder to world-writable and executable, creating a security hole. After installing the iTunes 11.2.1 update, my /Users folder became visible immediately and was given the appropriate permissions.

Renovated Podcasts Library — In the spirit of spring cleaning, Apple renovated the iTunes Podcasts library with new organization strategies and a nifty feature that tidies up downloaded podcast episodes by deleting them after they’ve been played.

The Podcasts library’s header bar is mostly unchanged save for the Unplayed button, which is now All Unplayed. According to “Take Control of iTunes 11: The FAQ” author Kirk McElhearn’s blog post on the changes to Podcasts, this tweak lives up to its moniker by displaying all unplayed episodes, even if they’re unchecked under the List view. The previous implementation did not display unplayed episodes if they were unchecked.

Clicking My Podcasts in the header bar reveals the bulk of the interface tweaks. After selecting a podcast from the list on the left, you’ll find that the Settings gear icon has moved and is now nestled between the play and podcast contextual icons (replacing the refresh icon, which has now moved into the podcast contextual menu). Podcast Settings now appears as a popover, and it includes the previous options for Play Order and Sort Order, as well as a notation to let you know you’re subscribed to a podcast (changed from a checkbox to an On/Off switch).

The options listed under On This Computer play a part in keeping your hard drive clean of lingering podcast episodes. One of the biggest changes in iTunes 11.2.1 is its capability to delete episodes 24 hours after they’ve been played, and that option can be accessed via the Delete Played Episodes pop-up menu. After first installing the iTunes update, your previously subscribed podcasts (viewed under My Podcasts) display a yellow highlight strip that beckons you to click a Learn More button, where you can say yay or nay to this automatic deletion feature. By default, the Delete Played Episodes option is turned off for previously subscribed podcasts, while newly added subscriptions default to on.

Note that if you choose to have podcast episodes deleted automatically, the first sub-view below the podcast’s title changes from My Episodes to Unplayed.

The Download Episodes option is also turned on by default. However, if you are playing episodes only from your Mac (and not syncing to an iOS device), you’ll save hard drive space by choosing Off from the pop-up and relying on streaming episodes from the cloud. 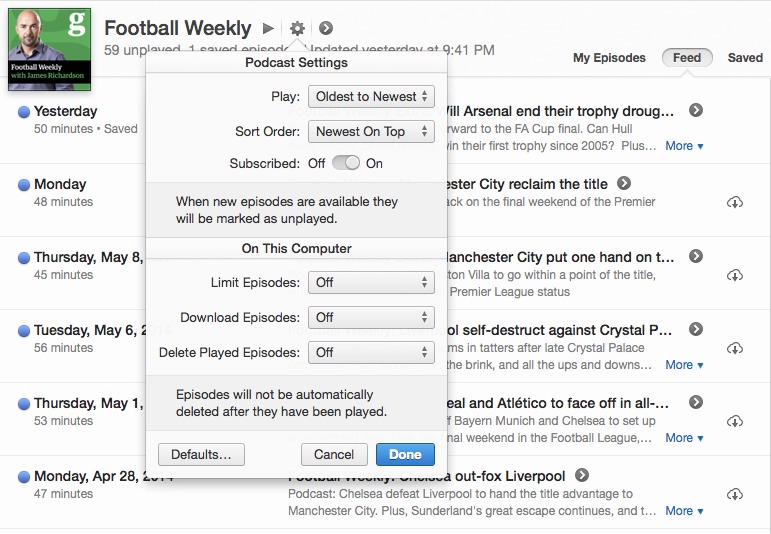 The Limit Episodes pop-up enables you to put a cap on the number of episodes that are displayed in the Unplayed/My Episodes view. If you set a restrictive cap (such as Most Recent or 1 Day), you’re given the option to delete downloaded episodes outside that criterion, or shift them to the Saved view.

The Unplayed/My Episodes sub-view is joined by the new Feed and Saved view. The Feed view is straightforward, displaying a podcast’s complete episode list (those not downloaded to your Mac show a cloud icon). The Saved view, which can be used like a favorites archive, is trickier. Here’s how episodes are moved to the Saved view:

Apple has also released version 2.1 of its Podcasts app for iOS with many of the same enhancements found in iTunes, including automatic deletion of played episodes, the addition of a Feed view, and more options for limiting episodes. Both iTunes and the Podcasts app for iOS are free downloads. iTunes 11.2.1 is available as a direct download from Apple’s iTunes Web page or via Software Update (224 MB).