It takes evil genius to combine the addictive qualities of World of Warcraft with the equally addictive qualities of Magic: The Gathering. But that’s just what Blizzard Entertainment has done with Hearthstone: Heroes of Warcraft for Mac and iPad. The Mac version requires Mac OS X 10.7 Lion or later and the iPad version requires an iPad 2 running iOS 5.0 or later. Both are free, with in-app purchases.

Hearthstone is a collectible card game, a genre that has historically been nigh-impenetrable to new players. But Blizzard has a knack for bringing geeky game genres to the masses, as it did for massively multiplayer online gaming with World of Warcraft and real-time strategy games with the Warcraft and Starcraft series. Blizzard has now done the same for collectible card games with Hearthstone by providing an extensive tutorial, taking the game online so you don’t have to find opponents in the real world, and eliminating the cost of entry.

In Hearthstone, you construct decks of 30 cards, based around a hero class. The classes will be familiar to anyone who’s ever played World of Warcraft or similar role-playing games. For example, priests can heal themselves and their minions, while warriors use weapons and armor to deal damage to their opponents. Each class also has a special hero ability that doesn’t require a card to play.

Players each take turns drawing and playing cards from their decks. Cards can be simple spells that do damage, heal allies, or provide power-ups; minions that can fight for your hero; or weapons, which can be used by your hero to do direct damage to the opposing player or his minions. Each card requires a certain amount of “mana” in order to play it. Both players starts with one point of mana, gaining one additional point of mana every turn until the maximum of ten, and mana is refilled every turn. That means that the most powerful cards and minions, which require significant amounts of mana, can’t be played right away. 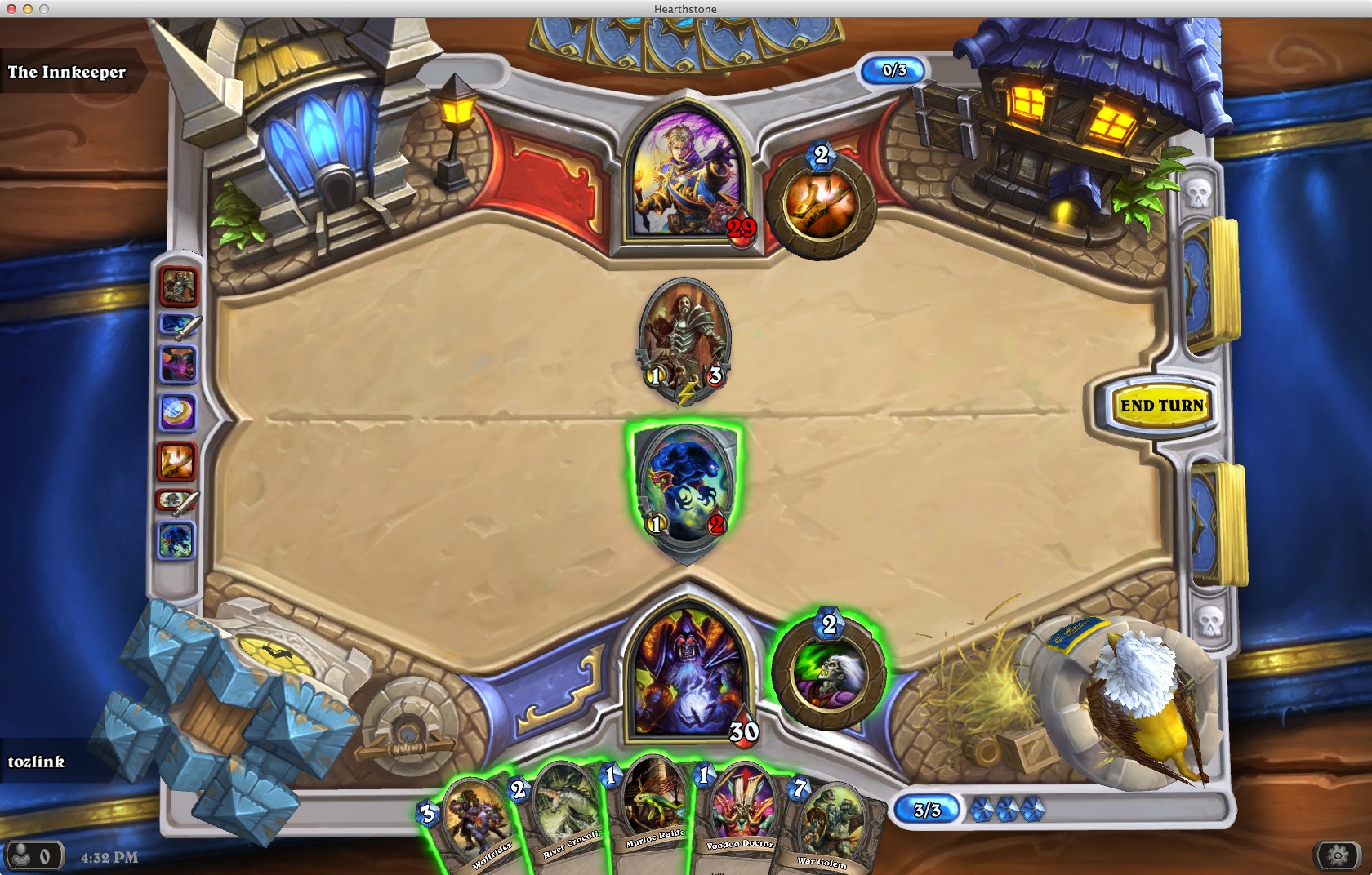 Each turn starts by drawing a card, which is added to your hand (you start with 3 cards if you go first, 4 if you start second). During your turn, you can play as many cards as you wish, as long as you have enough mana. You can also attack the opposing player or her minions with your minions or weapons. Each character can attack only once per turn, so the more minions on the board, the more chances for attacks. Also, most minions cannot attack on the first turn in which they’re placed on the board, so you usually have to
wait until your next turn to take advantage of them (some can attack right away, or have special abilities that are activated when they’re placed on the board).

Each minion has numbers for attack and health. When you or your minion attacks an opposing minion, your health is reduced by the value of that minion’s attack, unless you have something to mitigate the damage. However, attacking the opposing player usually costs nothing in terms of health, unless that player has a weapon.

Each player starts with 30 health, and the object of the game is to reduce the opposing player’s health to 0. Of course, it’s never that simple. Polygon has a video with some good survival tips.

If this all sounds a bit confusing, don’t let that dissuade you from trying Hearthstone. The game goes to great lengths to teach you the basics, so it’s accessible to everyone.

One of the more interesting aspects of Hearthstone’s online play is that unless you’re playing against a friend, you can’t chat with your opponent. Instead, you’re limited to a predefined set of phrases called “emotes,” such as, “Greetings” and “Well played.” It sounds limiting, but it minimizes verbal abuse. It’s refreshing to play a popular online game free of racial and homophobic epithets. The only way you can irk strangers is with a threaten emote, which is fairly innocuous and different for each class. For example, the warlock’s threat is “Your soul shall suffer,” while the paladin offers the less frightening “Justice demands retribution!” Still, either one is far more gentle than common online
trash talk.

Being a collectible card game, much of the strategy happens outside of matches, where you collect new cards to build better, more powerful decks. The easiest way to get free cards is to advance each of the nine heroes to level 10, since you gain a few free cards for each level between 1 and 10. The class you’re playing as get a certain amount of experience points after each match, and after you earn enough, that class gains a level. The current level cap is 60, but you stop earning new cards after level 10. Beyond gaining those initial cards, experience points and levels don’t currently have much impact on the game. The idea is to encourage you to try out each class and become familiar with them, because even if you don’t
play as that class, understanding what each one does is important to mastering the game.

You can also earn cards and gold, Hearthstone’s in-game currency, by completing quests, such as winning a certain number of matches with a given class. Gold, as well as real money, can also be use to buy card packs, which contain five random cards. One pack costs 100 gold, two packs costs $2.99, on up to 40 packs for $49.99. Yes, you’re reading that correctly, Blizzard confusingly mixes in-game currency and real-money, presumably to ensure that players who want more cards faster have to pony up. 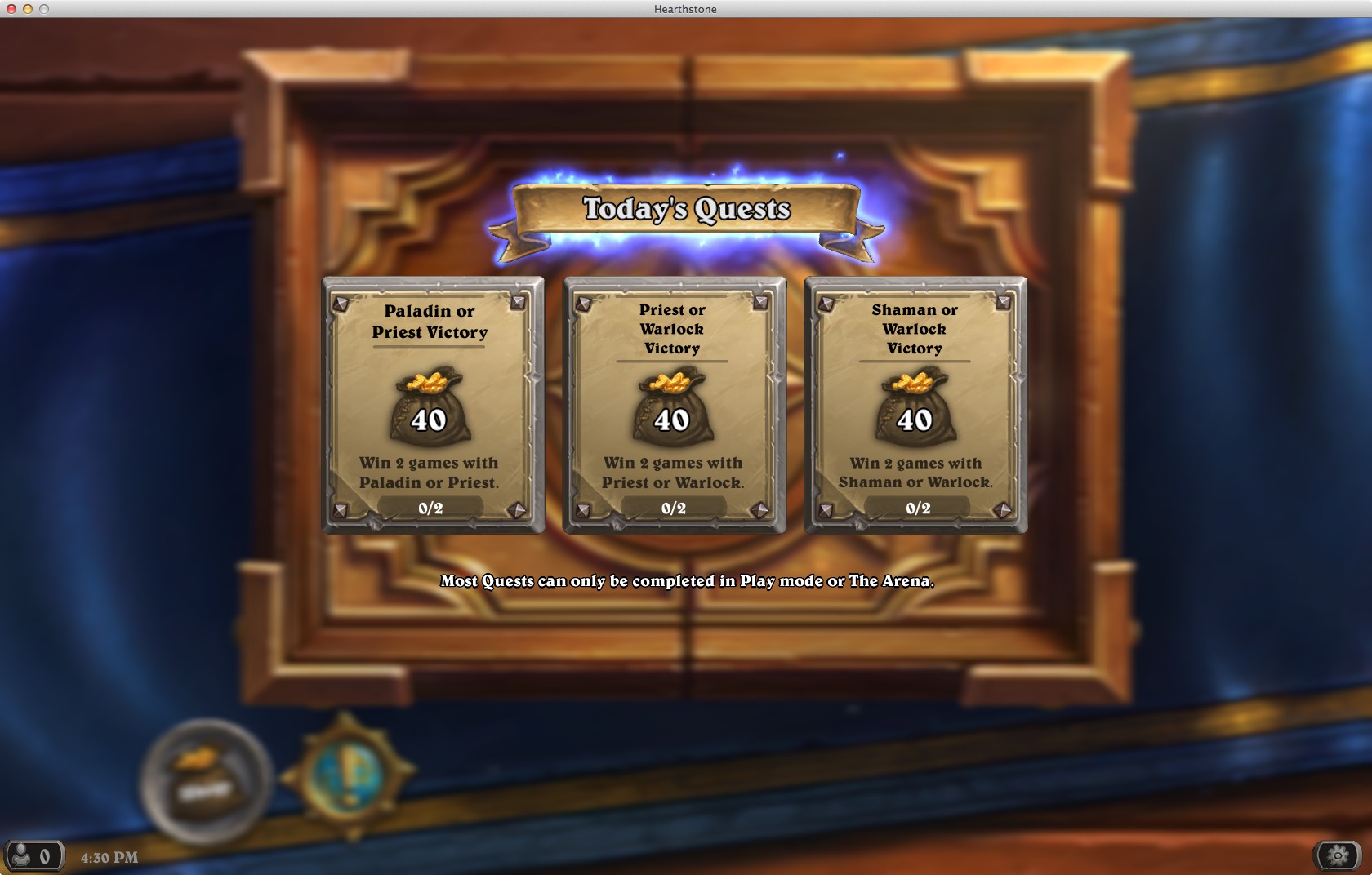 If you don’t get the cards you want, you can disenchant them to obtain arcane dust, which can be used to craft new cards. How much arcane dust is required depends on the strength of the card you’re crafting. However, you can’t disenchant cards obtained for free.

The fact that you can buy cards to build up your deck has led to criticism that Hearthstone is a “pay to win” game. Polygon took an extended look at the game’s economy and determined that casual players can build impressive decks given enough time, but if you want to rise to the top of the ranks, you’ll need to spend some money. But still, Hearthstone is much less of a financial burden than traditional collectible card games, for which you must purchase a starter deck even to begin.

If you need a goal beyond individual wins or collecting new cards, there’s a ranked ladder each month. You start at rank 25, and you move up the ranks as you defeat other players. This system ensures that you won’t face off against an opponent who greatly outmatches you.

As a casual player, I’ve had a lot of fun with Hearthstone without paying a penny. I much prefer playing on the iPad over the Mac, as it’s more suited to playing on the couch or in bed. However, the iPad version is more prone to spontaneous disconnects, especially when the iPad’s screen locks. This is especially annoying as it ends the match, counting it against you as a loss.

Hearthstone is an incredibly complex game, but it’s also one that’s easy to pick up. If you’re a fan of tabletop gaming, I encourage you to check it out.