For much of my life, soccer’s World Cup would come around and the United States would collectively shrug its shoulders while the rest of the globe celebrated joga bonito, the beautiful game. But soccer (or football, as every country but the U.S. and Canada calls it) has grown exponentially over the last decade here in America, and there is more stateside interest than ever in this quadrennial tournament that attracted 3.2 billion global viewers four years ago. World Cup 2014 also brings a myriad of video streaming options — both domestic and international — that enable you to watch the games in Brazil
on your Mac, your iOS device, or your Apple TV.

Now, I’m not here to proselytize for the church of football (sorry… soccer) to fans of baseball or American gridiron (excuse me… football) or to those who aren’t sports fans. And I’m not going to apologize for the brazen, Mafia-like attitudes that FIFA (Fédération Internationale de Football Association, the World Cup’s governing body) has displayed in the last decade and that John Oliver recently tore to shreds in his HBO show, “Last Week Tonight.” (It’s a 13-minute clip that is both hilarious in the bleak overview he presents and educational for fans and non-fans alike.)

But the World Cup is my favorite sporting event, the one that makes me giddy with excitement as I count down to the first game like a gleeful child awaiting Saint Nick. The one that makes me stop everything to find a screen to see all the magical goals, who will put England out of the tournament on penalties, and whether the U.S. team might, just might, break into the upper echelons of the soccer world.

And I’m here today to make sure all of you who are as afflicted as I am can navigate your way to watching the matches, whether it be on a Mac, iOS device, or Apple TV.

Free Streaming (with a Catch) — In the United States, ESPN and ABC (both owned by the Disney-ABC Television Group) have the rights to the World Cup and will be sharing the TV broadcasts amongst all their channels. Additionally, Univision (as well as its UniMás and Galavisión subsidiary channels) will be showing all the games in Spanish. (Here’s the daily schedule from the Variety Web site with the destination channels noted for each game.) But if you’re not in front of the telly, these broadcasters also offer several streaming options.

ESPN will be streaming all games via its Web site, its free WatchESPN app (for iOS and other platforms), and the WatchESPN app on the Apple TV. However, there is a catch — your cable provider must be an ESPN partner, and you need to enter your account’s credentials to verify that you have access to this stream. If you don’t subscribe to cable TV, this is where you might need to phone a friend to see if you can make a trade (paying for a month’s bill, buying some good beer, etc.) to get access to her account for a bit. 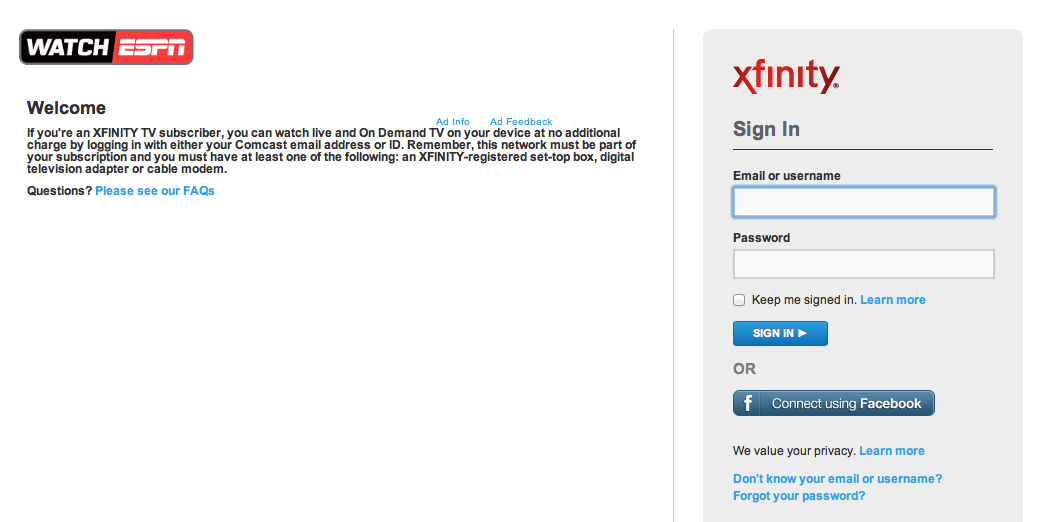 For on-the-go viewing, the WatchESPN iOS app is indispensable. In addition to watching the live stream of games, you can also watch replays if you had to miss the game. And it offers AirPlay functionality so you can stream it to an Apple TV. Beware, however, to not get too carried away when streaming over an LTE cellular connection, as video streaming can blow through your data allowance. 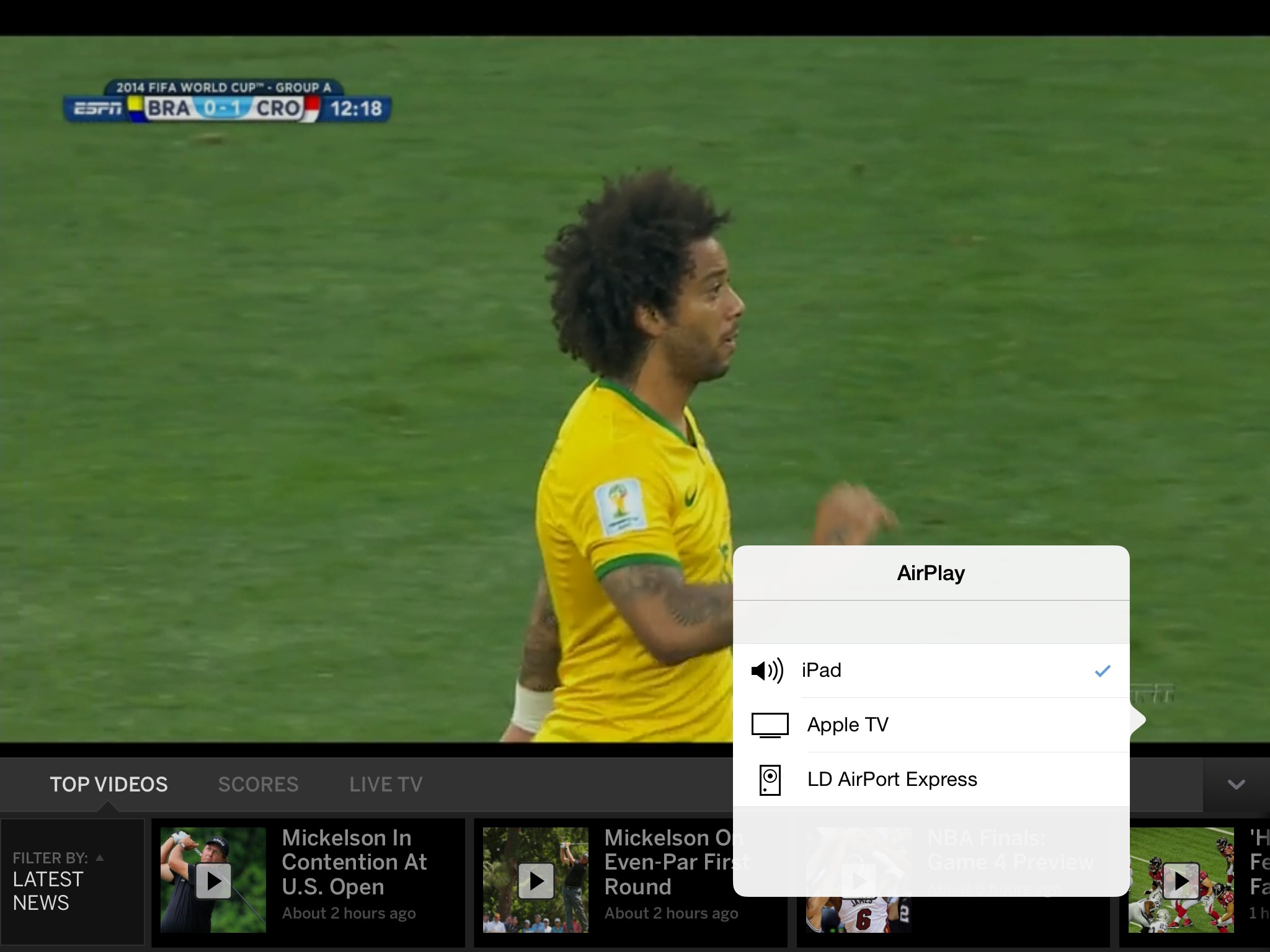 If you’re on a Mac, visit this ESPN page to access the main video player (you can also select additional ESPN channels below the player). If this is your first time, choose your cable provider from the pop-up menu and then enter your cable credentials on the next page. The player enables you to go to full screen mode as well as turn on closed captioning, adjust volume and pause video, and share your thoughts via Facebook or Twitter. If you
have a compatible Mac running OS X 10.9 Mavericks, you can use AirPlay Mirroring to stream your Mac’s screen to an Apple TV and watch the game on a bigger screen.

Apple TV owners with cable credentials can simply open the WatchESPN app and watch the games on the big screen without fussing with AirPlay. However, even if you entered credentials previously, you may have to enter them again. I used the Apple TV’s ESPN app some time ago and was certain that I had entered my Comcast Xfinity credentials. However, when I selected the Brazil vs. Croatia game, I was asked to select my provider again and then visit a Web site (manually typing http://es.pn/appletv into my iPhone) to enter an activation code. After doing so, I had to put my credentials into a Comcast Xfinity Web page one more time. Once those were accepted, the ESPN Web page acknowledged the successful
activation and video started playing immediately on the Apple TV.

If you lack cable credentials to sign into ESPN, Univision doesn’t require a cable provider to stream the first two rounds of the World Cup (the group stage and the round of 16, or 56 of the total 64 matches) via its Univision Deportes iOS app (you will need to register for a Univision account, though). However, once the World Cup reaches the quarterfinals, the cable credential requirement kicks in. Like the WatchESPN app, you get mobile viewing and AirPlay streaming capabilities. If you’re not fluent in Spanish, you might feel a little lost with the commentary, but the language divide is more than made up for by the gusto of the
announcers.

Go Global — If you can’t acquire cable credentials for streaming from ESPN (or Univision in the later rounds), you can tap into the vast global network of providers offering streaming video. However, it’s not as easy as simply visiting France’s TF1 or the UK’s BBC or ITV sites to watch live streaming video (or even highlights). This is due to the fact that video rights are largely segregated by country, and streaming access is determined by your computer’s or device’s IP address. So if you attempt to stream video from the BBC’s iPlayer Web site from anywhere
outside of the UK, you’ll be politely notified that there’s no video stream for you.

But you can magically transport yourself to another country using a virtual private network (VPN) service, which reroutes your Internet connection through an IP address in the country of your choice. Because of my soccer addiction, I’ve tried several VPN services over the years, and have had good experience with BlackVPN, TunnelBear, and Hide My Ass (my current provider). Now is a good time to sign up, as these three and many others are offering deals in conjunction with the heightened interest in VPNs due to the World Cup. And while it’s easier than ever to stream video here in the United States, I still plan
on watching some games and highlight shows from the UK because I prefer the TV presenters there.

The easiest way to try out a VPN is using TunnelBear, which offers up to 500 MB per month of free VPN routing (with an additional 1 GB of data if you tweet to @thetunnelbear and ask nicely). You can sign up for an account at the TunnelBear Web site, then download either a desktop app for Mac OS X or Windows or a mobile app for iOS or Android. (Or, you can start by downloading an app and create an account in it.) On the Mac, TunnelBear installs a menu bar icon from which you can choose the countries you can tunnel through, including these World
Cup participants: UK, France, Germany, Holland, Japan, and Italy. Select a destination from the pop-up menu, click the dial to On, and your Internet connection will be routed through an IP address in that country. The TunnelBear tool also keeps track of how much data you have left. 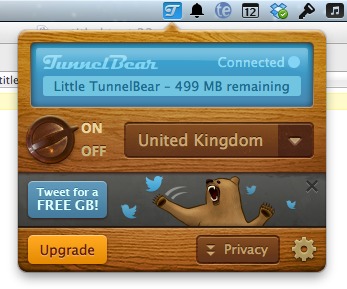 For iOS devices, the TunnelBear app requires that a Safari browser window be opened in order to visit the TunnelBear Web site to install VPN settings on your device. After clicking the I’m Ready button, you’re asked to install a TunnelBear VPN profile in Settings. Once that’s installed, visit Settings > General and tap VPN, where you see a set of countries to choose from (including Australia). Tap to select an IP destination, and then flip the VPN switch at the top of the screen to
On. A VPN icon appears to the right of your Wi-Fi icon at the top of the screen to remind you that it’s turned on. 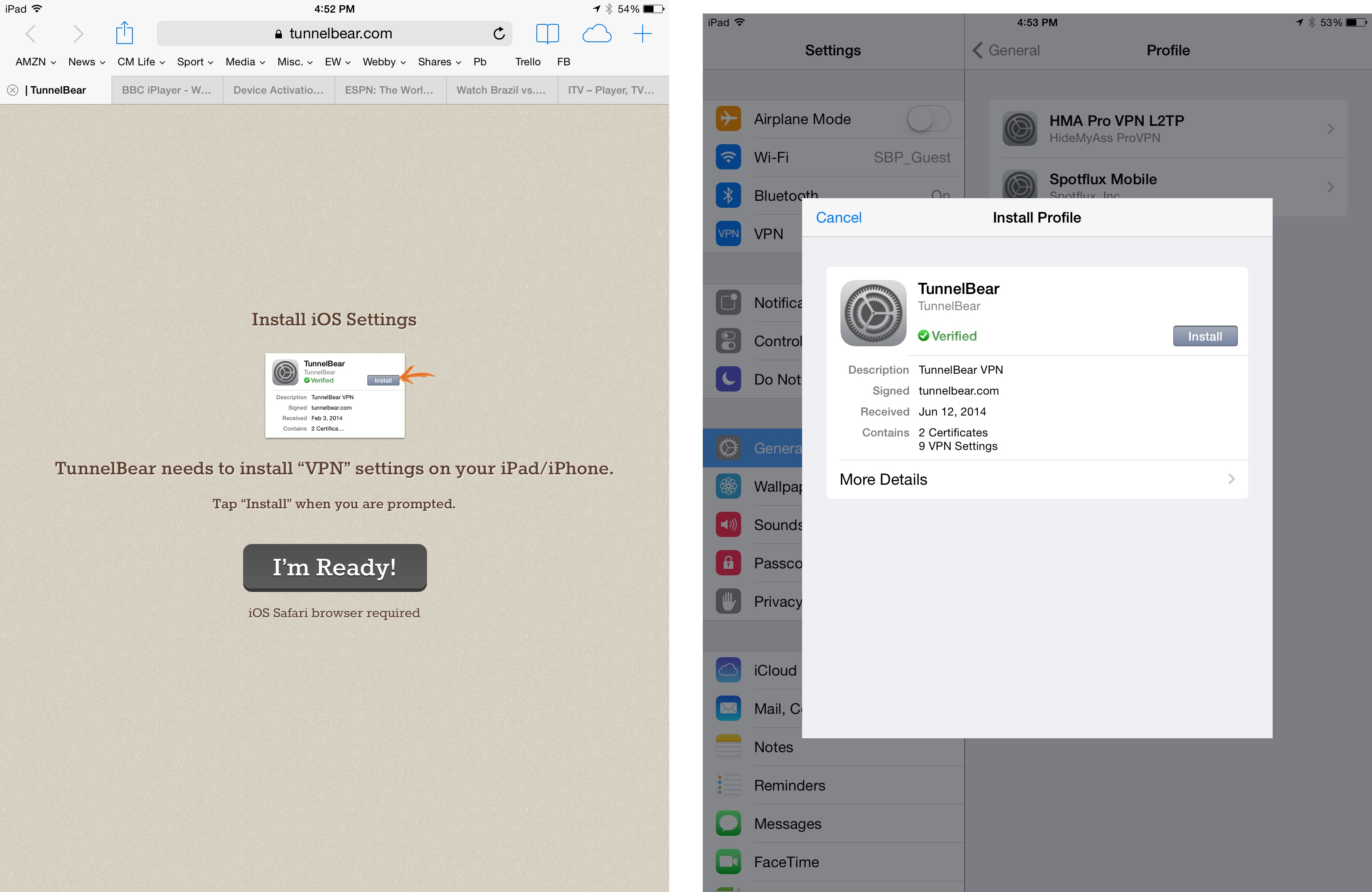 After connecting either on the desktop or on an iOS device, you can visit the Web site of a broadcast partner in your selected country to watch live streams and highlight shows. In the UK, the BBC and ITV are sharing the broadcasts (check here to see which channel is showing which game), and the live games and replays can be streamed from a Web browser
on your Mac. (ITV requires you to register an account with a UK postal code.)

Unfortunately, if you’re using an iOS device, you’re limited to watching on the BBC, using Safari. The ITV channel routes its video through its ITV Player app, which is available only in the UK App Store. The BBC offers an iPlayer iOS app, but also allows streaming in Safari for those of us who can’t access the UK App Store.

With just a 500 MB allowance from the free TunnelBear account, you might get through half of a game, so you’ll want to take advantage of the 1 GB tweet plea (which can be done through both the desktop and iOS apps) if you need more time to evaluate the service, after which you’ll need to pony up for a subscription to keep watching via VPN.

Now if you’ll excuse me, I have some football to watch.

Comments About FunBITS: How to Watch the 2014 World Cup Online