Who doesn’t love SimCity? Since the launch of the original game in 1989, it has become a mainstay in places where games often are unwelcome, like schools. Even Adam and Tonya Engst, who are emphatically not gamers, loved SimCity back in college. The game kept evolving over the years, with SimCity 2000 and SimCity 3000 adding ever more complexity, culminating with SimCity 4, released in 2003. Electronic Arts (EA) tried to reboot the series in 2013, but with dumbed-down gameplay, and the requirement of an online connection, which overwhelmed EA’s servers, making the game
unplayable for many
.

Thankfully, Aspyr Media, champions of Mac gaming, have retooled and updated SimCity 4: Deluxe Edition, bringing it to the Mac in all its glory. It’s available from the Mac App Store for $19.99 (on sale for $9.99), is a 1.14 GB download, and requires OS X 10.8.5 Mountain Lion or later.

This isn’t Aspyr’s first crack at porting SimCity 4 to the Mac. The company brought it over in 2003, but coded for PowerPC-based Macs. Even after several updates, the game never worked well on the subsequent Intel-based Macs, and Aspyr gave up in 2007.

Fortunately, Aspyr rebuilt this version from the ground up for modern Intel-based Macs, including support for native screen resolutions. The original game was designed for common resolutions of a decade ago, and thus looked terrible on most of today’s displays. However, the new version runs perfectly at 2560-by-1440 on my 27-inch Dell monitor, and is gorgeous. One thing I hope to see in the future is better support for trackpad gestures, like pinch-to-zoom, because otherwise the game treats trackpads like an old-fashioned mouse.

Why would you want to play an 11-year-old game in the first place? SimCity 4 was too far ahead of its time when Maxis released it in 2003. It required resources that just didn’t exist then, and even my 2008-era powerhouse gaming PC had trouble running it. Now, in 2014, we finally have the hardware necessary to run the game smoothly.

If you’ve never played SimCity, much less its fourth incarnation, you may wonder what you do in the game or why it’s so demanding. Simply put, you build cities. You shouldn’t really think of SimCity as a game, because it’s not. It’s a city simulator that attempts to simulate nearly every variable involved in running a major metropolis.

There are no win or loss conditions, no achievements, no final boss battles. SimCity is the modern equivalent of crafting a ship in a glass bottle: you build it merely for the satisfaction of building it and to answer your own questions about why certain aspects of cities do or do not work well.

You can start with a number of pre-built tutorial cities (and if you’re new, you should, as they offer some guidance in the basics of running a city), or you can start with a bare chunk of land that you can shape to your heart’s content. You can plant trees, raise and lower the land to create mountains and valleys, add bodies of water, and even spawn wildlife. The game also includes empty regions based on real cities, like New York, San Francisco, and London. 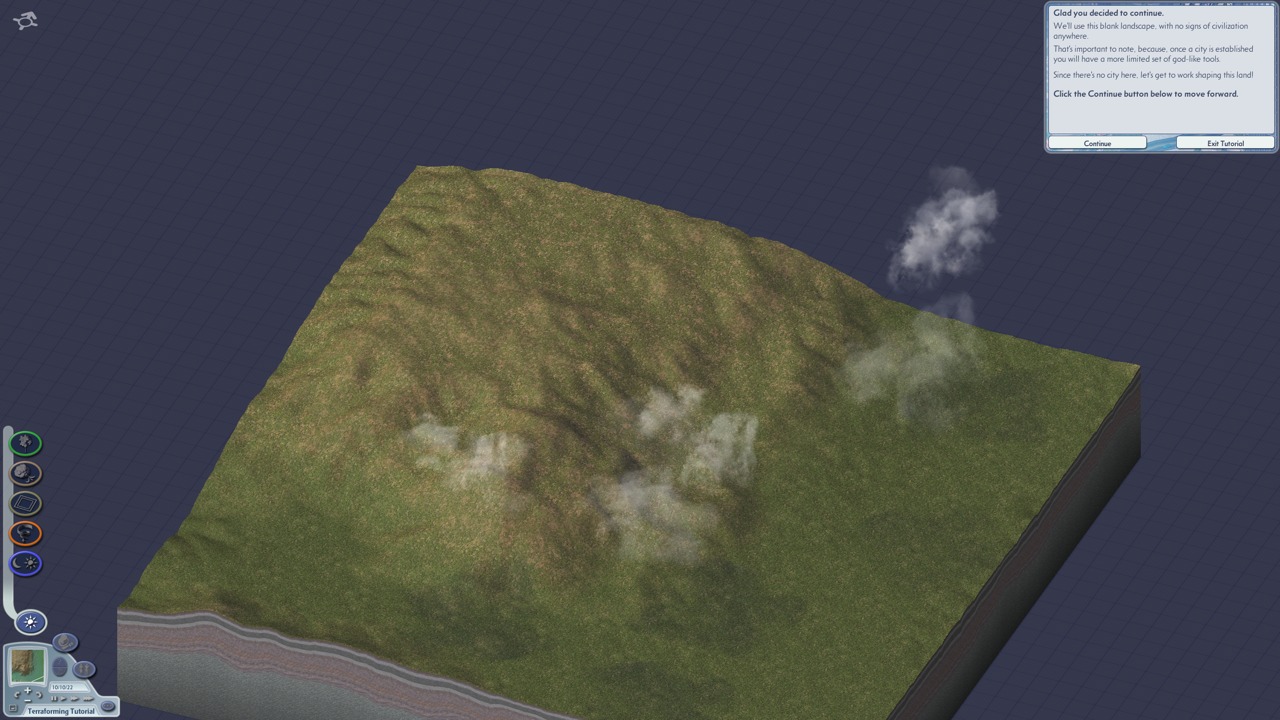 You start the game in God Mode, during which you can shape the land for free, but once you decide to begin building your city, you enter Mayor Mode, in which any modifications to the landscape require costly construction.

In Mayor Mode, you name your city, zone areas, build roads, and lay out utilities. This is the meat of the game. The first order of business involves building something sim-people actually want to move to, which requires residential zoning (they need places to live), roads, electricity, schools, commercial zoning, and agricultural or industrial zoning (they also need places to work). 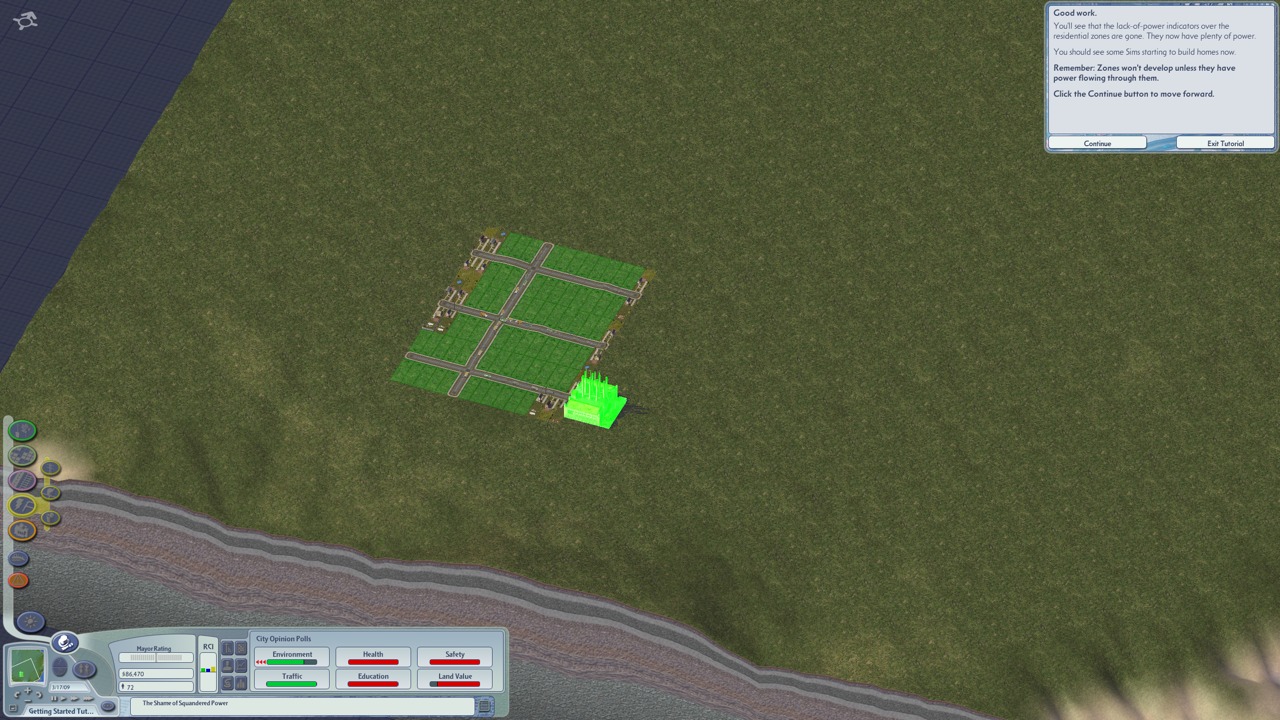 From there, it’s all about how you want to shape your city. You can add all sorts of extras, like police stations to control crime, fire stations to keep fires from spreading, and niceties that will make your sims happier, like parks and landmarks. But everything you build has costs for both creation and regular maintenance.

Managing your city’s finances is one of the harder aspects of Sim City 4. There are two factors that play into how much income you have to work with: population size and tax rates. The more sims who move to your city, the larger the tax pool, and you can keep them coming by satisfying their basic needs. To help with that, there’s a handy RCI (Residential, Commercial, Industrial) chart that show which type of zones are in demand. For instance, if demand for residential areas is down and demand for agricultural zones is high, that means your sims need jobs, and the residential demand won’t increase until you build more agricultural areas to provide those jobs.

Besides population, you have complete control over taxation, which also affects population. You can set tax rates based on each type of zone, like Low Wealth Residential, High Wealth Residential, Agricultural, and Manufacturing Industry. To maximize income, you have to find the right balance between tax rates so that you’re extracting the most revenue without driving people out.

Playing with these variables lets you experiment with social planning. For instance, later in the game, it can be tempting to lower taxes on the wealthy and raise them for the poor, in order to gentrify your city and bring in more income. Such a strategy may make sense on paper, however morally reprehensible it is, and it’s easy to see how elected leaders come to such decisions. It’s a perfect thing to try in SimCity, where the results don’t affect real people.

You also have a panel of advisors that can tell you the best course of action on finances and other problems that will plague your city, such as school overcrowding, pollution, and crime.

If you get bored with your city, you can plague it with disasters for fun and destruction. You can summon a tornado, an earthquake, lightning, fire, an alien invasion, or even a giant robot dinosaur. 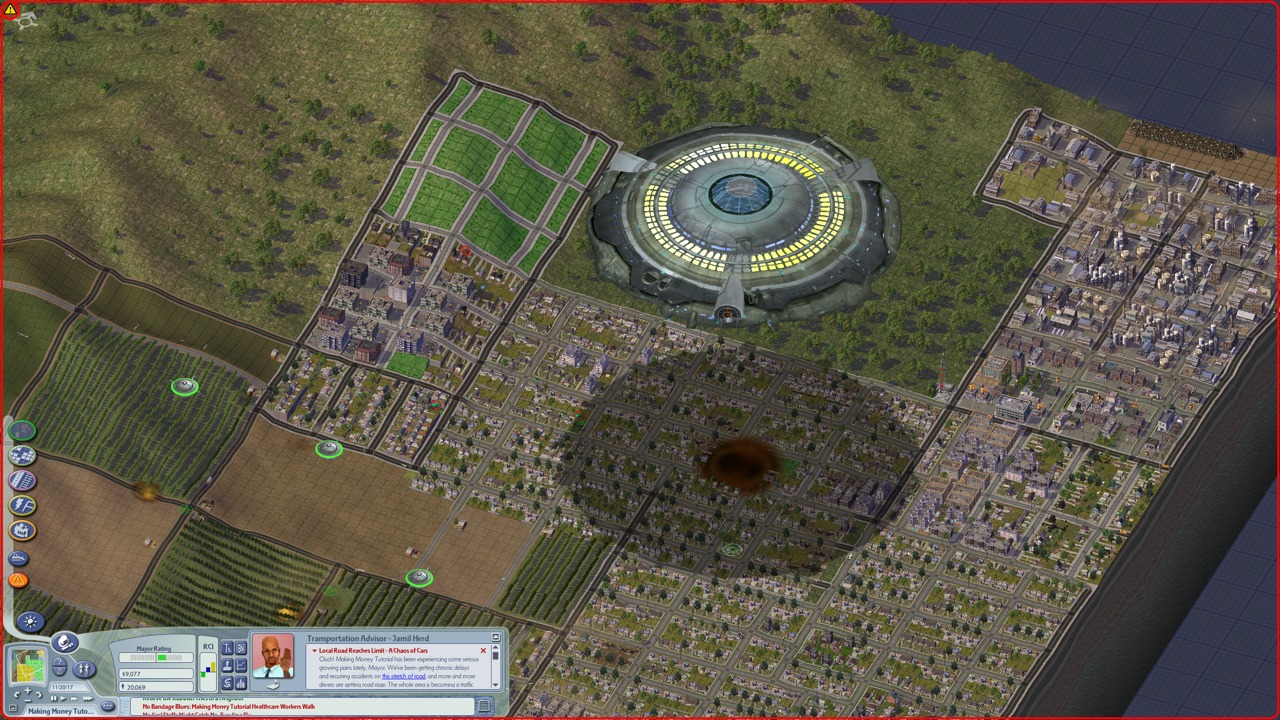 The included “Rush Hour” expansion provides another distraction — U-Drive-It, which lets you take control of vehicles around the city, including police cars and fire trucks. Frankly, this mode falls flat for me. The controls are weird, it doesn’t fit with the rest of the game, and I find it boring. Luckily, it’s easily ignored, so it doesn’t detract from an otherwise great game.

SimCity 4 is one of the best games of all time, and Aspyr has done a great job of bringing it back to the Mac. Unlike most games, it’s a way to stretch your creativity and critical thinking. It offers unlimited hours of play, and gives insight into real-world politics and urban planning. If you’ve been missing SimCity, or somehow have never played, this is a great time to try it.