There are endless mountains of accessories for your Apple products, and, let’s be honest, most are junk. If you’ve been in the Apple world for any length of time, you’ve probably accumulated a closet full of iPhone cases, adapter cables, keyboards, screen protectors, and other bric-a-brac.

After over a year of being a professional technology writer, I’ve amassed far more than my fair share of crud, but I have found six gizmos that truly do improve my everyday Apple experience.

Skiva USBLink Duo 2-in-1 Cable — The Lightning port found in Apple’s newer iPhones, iPods, and iPads is great, providing quick charging and unidirectional insertion. But as with many things Apple, it’s nonstandard. Most devices from other companies, such as Amazon’s Kindles and Android phones, and even iPhone battery packs and iPad keyboard cases, charge using a micro USB plug.

If you’re primarily an Apple household, it might not make much sense to keep a micro USB cable plugged in all the time. That’s where Skiva’s ingenious USBLink Duo 2-in-1 Cable comes in handy. On the surface, it appears to be a normal one-meter Lightning cable, but when you remove the cap, a micro USB plug is revealed underneath. The USBLink Duo 2-in-1 retails for $15.99, but availability is limited. 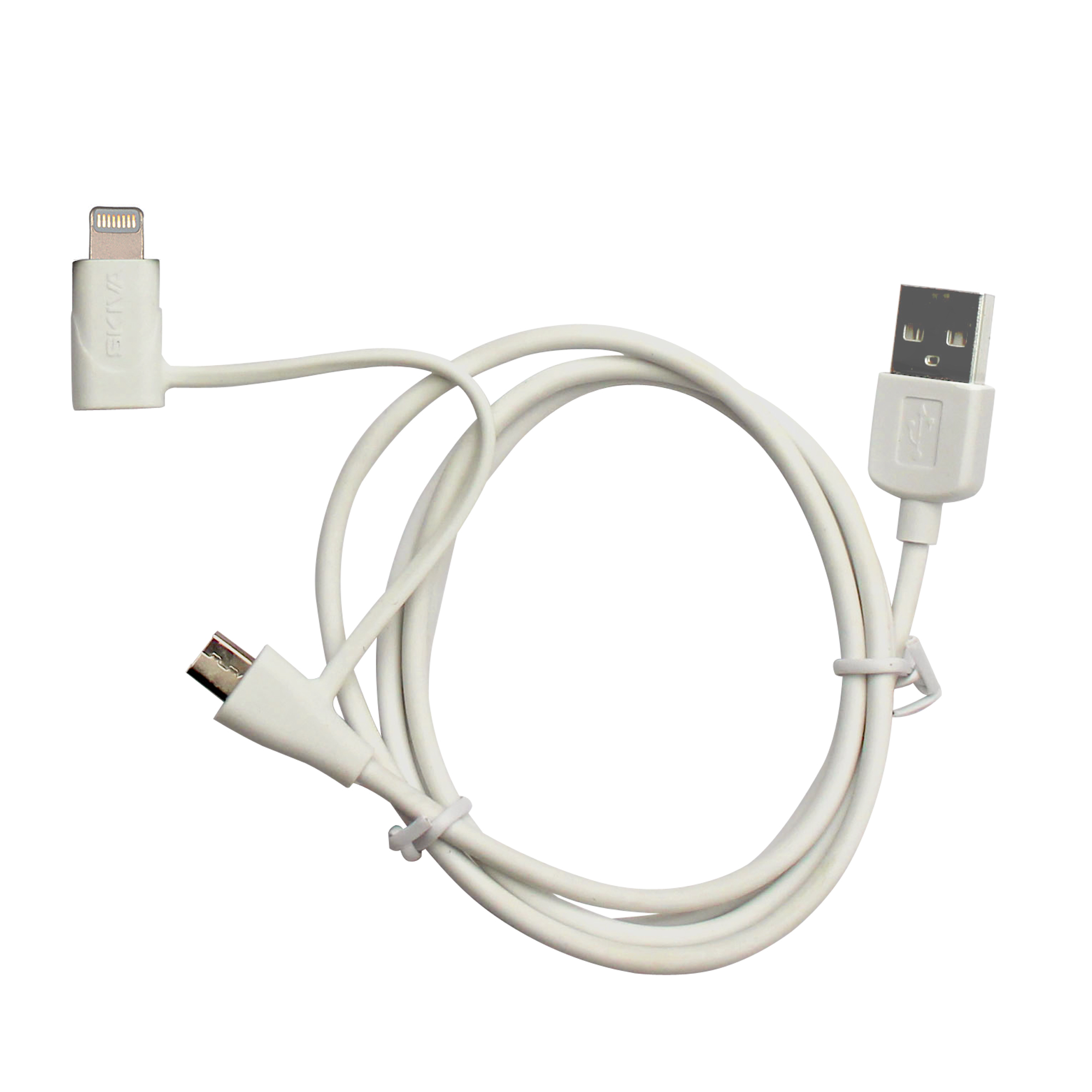 MagCozy — Speaking of proprietary Apple cables, do you have one of those MagSafe to MagSafe 2 converters to use your older Apple power supplies with newer MacBooks? That adapter is tiny, and easily lost, which is where MagCozy comes in.

Similar to the design of the aforementioned Skiva cable, the MagCozy tethers the MagSafe 2 adapter to your MagSafe cable, whether it’s a T-style or L-style. You can attach and detach the adapter at any time, but it remains secured to your cable — and out of your couch cushions. The MagCozy comes in seven colors (including Glow in the Dark), and costs $9.99 for two. 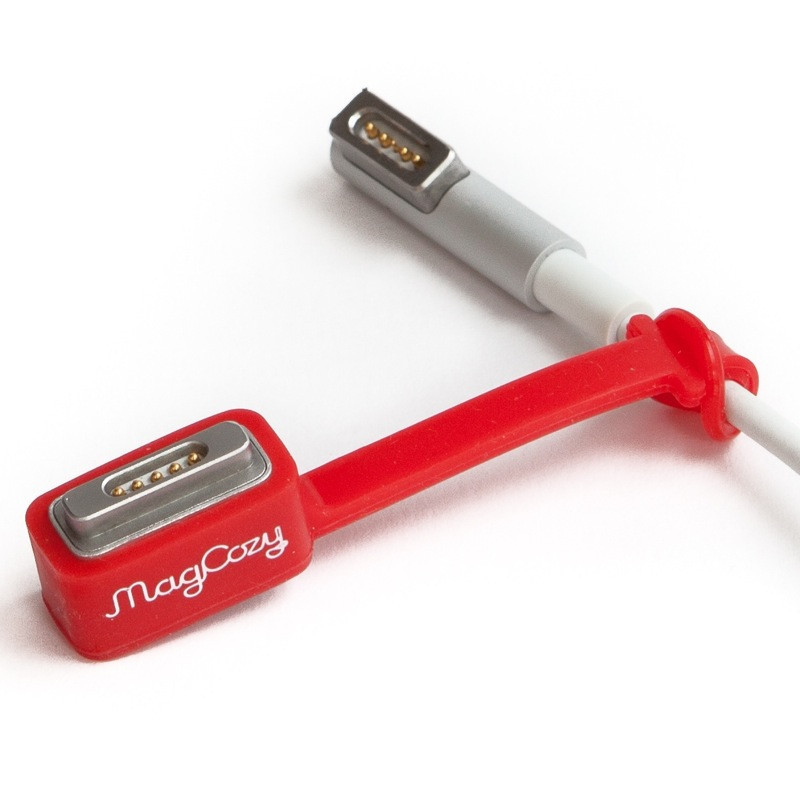 Lenmar Meridian — I wouldn’t want to use one all the time, but a battery case for your iPhone is handy to have when traveling and in case of emergency.

Before I left for Macworld/iWorld 2014, I picked up the Lenmar Meridian iPhone 5 Power Case ($89 list; $65 at Amazon), which came recommended by The Wirecutter. It’s about half the price of the popular Mophie Juice Pack Plus, and has a beefier battery — 2,300 mAh versus the Juice Pack’s 2,100 mAh.

The few times I’ve had to use it, the Lenmar Meridian has served me well, giving me a full 24 hours of battery life without a full recharge, and without being too obtrusive. Unfortunately, it doesn’t fit the iPhone 5c. 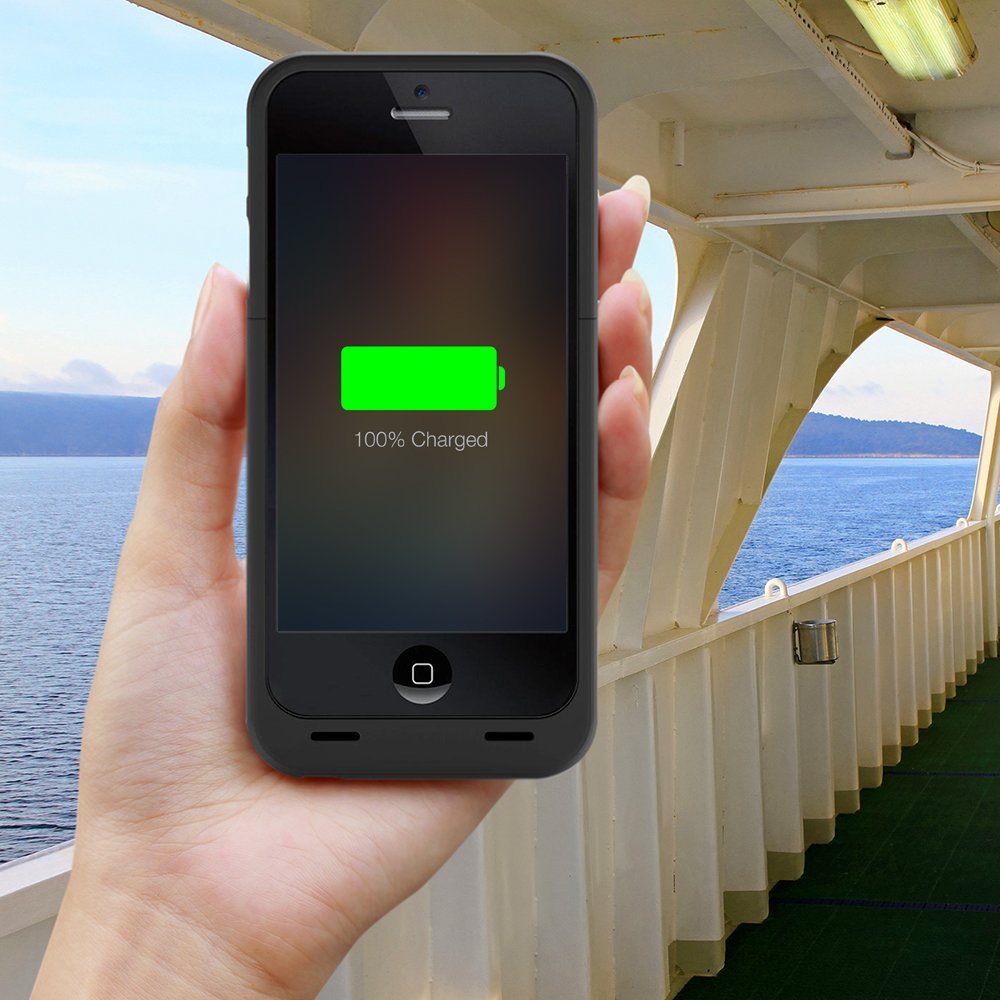 iSlip Lite — The first time I saw the iSlip Lite from Cooper Product, I found myself asking, “What the heck is this thing?” It’s an elastic band with microfiber on one side. The idea is that you wrap it around your iPad’s case, then take it off to clean your screen.

That sounded lame, until I figured out a better way to use it. Slide the iSlip Lite over the middle panel of your iPad’s Smart Cover, with the elastic facing out, then fold the Smart Cover into a triangle. The flat side of the triangle is now a cleaning surface, turning your Smart Cover into a big fingerprint eraser for your iPad. The iSlip Lite costs $5.99, and comes in a variety of colors and patterns, if that floats your boat. 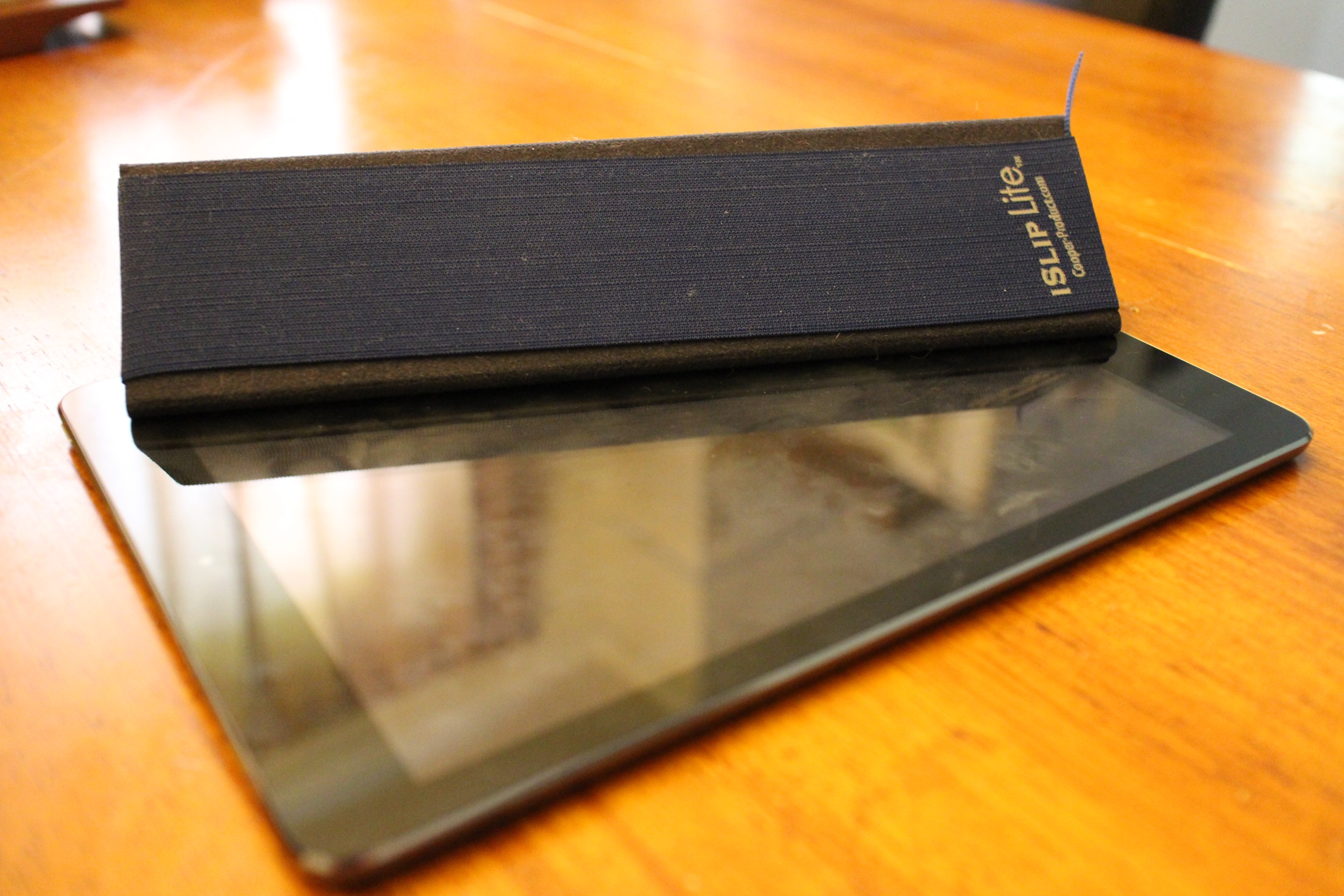 Magnetic Organization System — If you house your MacBook on your desk, as I do, you probably also have to deal with the annoyance of your cables falling behind your desk when you unplug them.

The Magnetic Organization System (MOS) is a clever gadget that attaches to your desk via suction (or to a wall with an included adhesive circle). Inside, there’s a magnet that latches onto the ends of USB and DisplayPort cables, keeping them from dropping to the floor. For non-magnetic cables, such as Ethernet cables, the MOS comes with three magnetic cable ties that you can attach to make them cling. 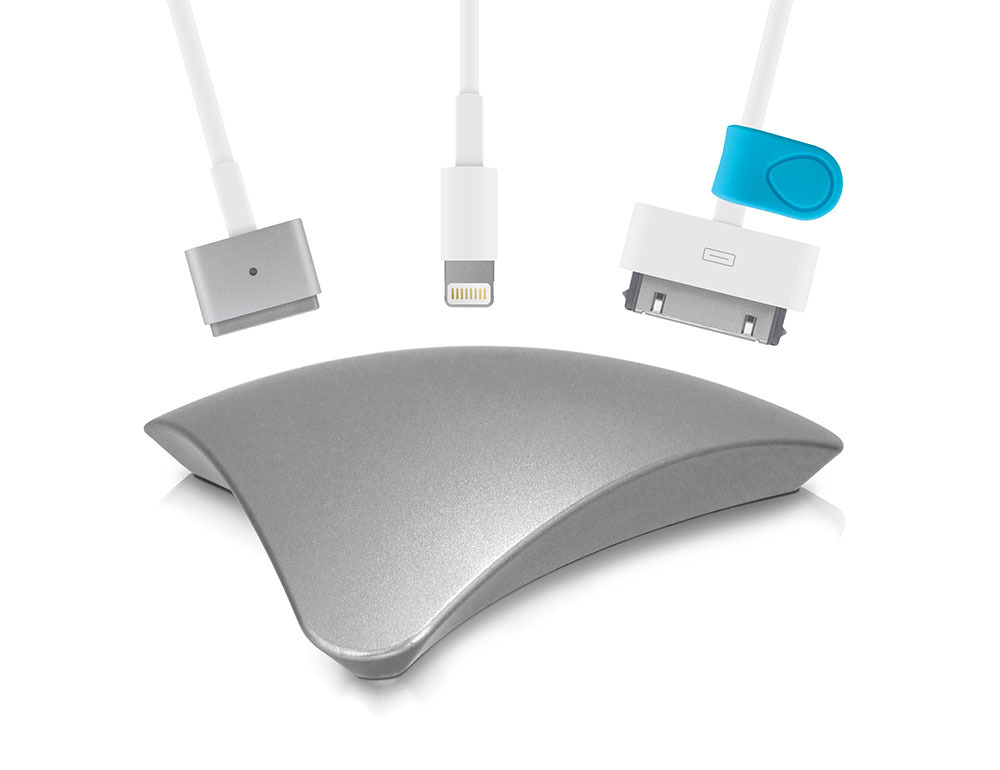 Nimblstand — Do you struggle with finding a place for your iPad and/or iPhone on your desk? The Nimblstand is an innovative solution. It’s a plastic stand that attaches to your Apple Wireless Keyboard, with a slot that can hold an iPad in landscape orientation, or an iPad and iPhone together in portrait orientation. 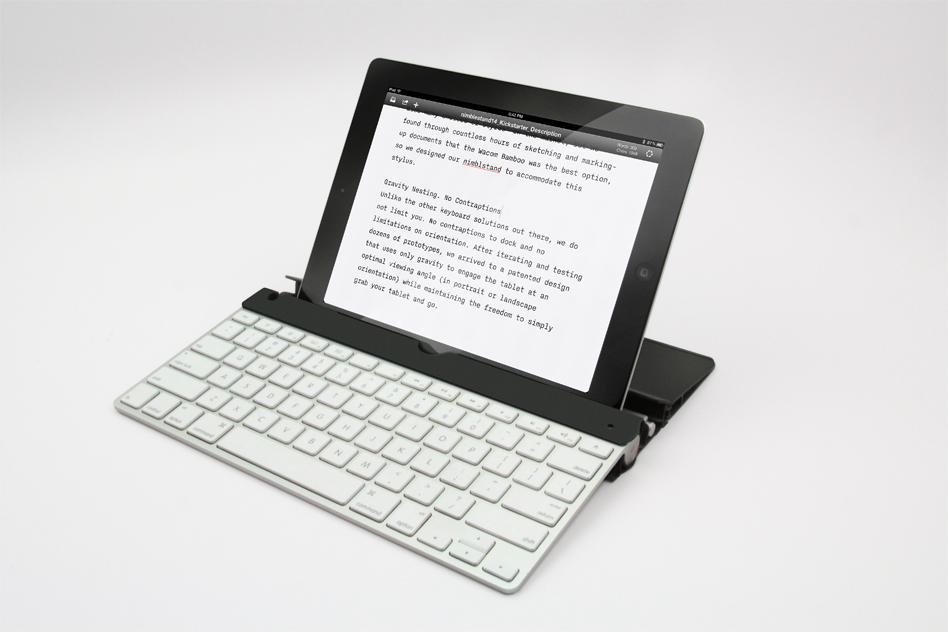 Much as I like it, I have two minor reservations about the Nimblstand. First, I wish it were aluminum instead of plastic, which feels cheap and clashes with the keyboard’s aesthetics. Second, the Nimblstand comes with a couple of adhesive foam blocks to attach inside its slot to accommodate the thinner bezel of the iPad Air. Having to stick little foam blocks to the stand feels kludgy.

Do you have a favorite Apple accessory that you use every day? Tell us about it in the comments!