Platform games have been a video game staple since the original Donkey Kong hit arcades in July of 1981. While Donkey Kong seems rudimentary today, the basics of running through a level and jumping over obstacles have remained as the genre has evolved (with the hero of Donkey Kong, later named Mario, usually leading the way with genre-defining titles like Super Mario Bros., Super Mario World, and Super Mario 64).

The advent of touchscreen gaming left developers with a conundrum. Good platforming games depend on precise mechanical controls, like buttons, directional pads, and joysticks. Working around that limitation was a big challenge.

One early and obvious workaround was to overlay a virtual d-pad and action buttons on the screen. But that approach stinks for several reasons: they interfere with the field of view, provide no tactile feedback, and are woefully imprecise.

A better idea came in the form of “endless runners” — games where you don’t control the character’s movement, but do tap to specify the timing of jumps and sometimes usage of weapons. An early example of this sub-genre is the monochrome Canabalt, which popularized this style of play. But endless runners are shallow by nature and are brief, arcade-style amusements at best.

Badland broke out of those touchscreen limitations, replacing the standard “guy who runs and jumps” with a hairy, legless blob that floated through each level’s puzzles and pitfalls. It was a unique approach that paid off, earning an Apple Design Award and the FunBITS seal of approval (see “FunBITS: Badland for iOS,” 21 June 2013).

Now another Apple Design Award winner (see “FunBITS: WWDC 2014 New Technologies and Apple Design Awards,” 6 June 2014) has taken the Badland formula and expanded upon it. While Badland had your character constantly moving forward in a single direction, much like seminal platformer Super Mario Bros., Leo’s Fortune ($4.99 in the App Store) by developer 1337 & Senri seems to have nailed how do multidirectional platforming on touchscreen devices like the iPhone and iPad.

Even before you get your hands on the screen, you might be blown away by the game’s graphics. Leo’s Fortune features lush, fully rendered environments, with pleasing lighting effects and richly detailed textures. You play as Leopold, a sea-green mustachioed furball whose fortune has been stolen. To get it back, you must lead Leo through 24 trap-filled levels. 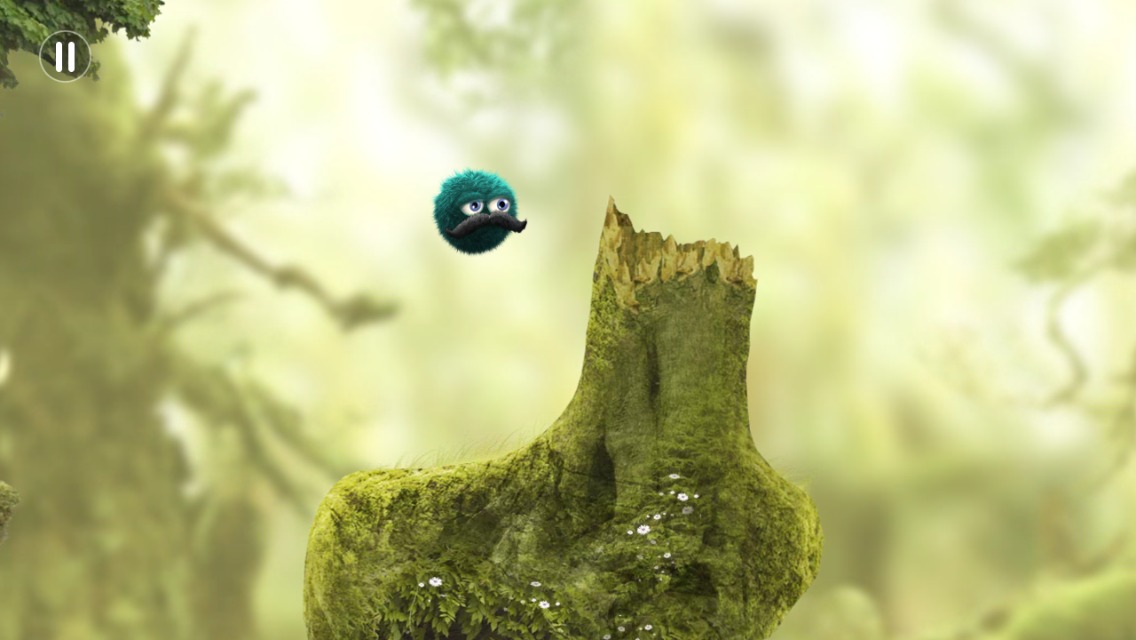 For a creature with no legs, Leo slides quickly across the ground. You move your left thumb left or right on the left side of the screen to move in the respective direction, and a helpful gauge appears over your thumb indicating your speed. Like the fuzzy creature in Badland, you float instead of jumping — by swiping your right thumb up on the right side of the screen. Swiping down with your right thumb while Leo is in midair causes him to slam into the ground, which is necessary for many of the game’s puzzles.
There’s also an option to use on-screen controls, if you really want to.

You may not notice a clever design element that makes the game easier to control. Unlike most platformers, where the player character is grounded near the bottom of the screen, Leo sits nearly in the center of the screen most of the time, with the ground being elevated to make plenty of room for your fingers. That’s a clever approach other developers would be wise to duplicate. 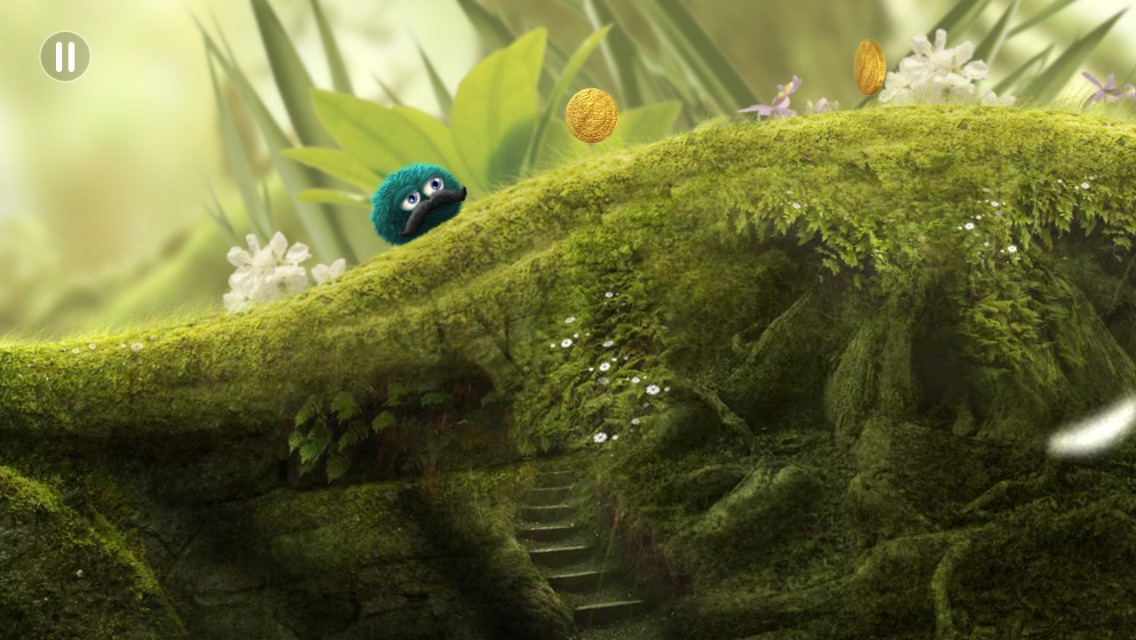 There are no enemies to fight in Leo’s Fortune. Instead, you have to float over pits, avoid spike traps, and solve puzzles. The puzzles can be surprisingly intricate for a mobile game. For example, in one early level, you must work a mechanism to roll a ball onto a level and hit the level to fling the balls into a basket, which finally lifts a door. 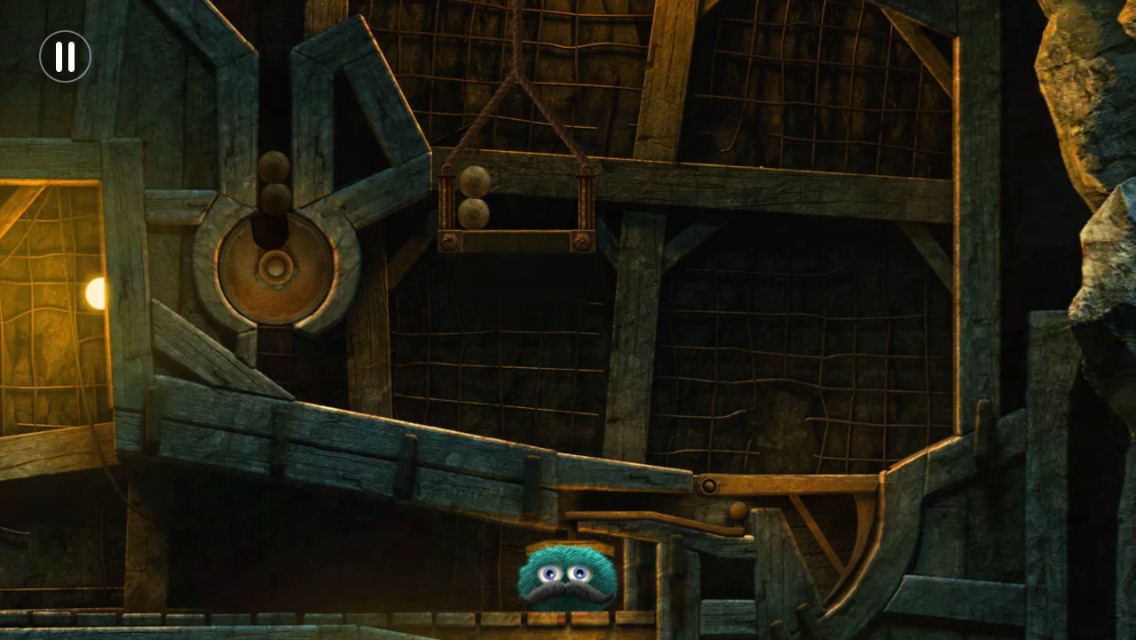 Intricate puzzles aren’t the only source of depth in Leo’s Fortune. Like the 3D Mario games, Leo’s Fortune is easy enough to breeze through if you just want to get to the end; the true challenge is in passing each level’s challenges: collecting all coins, making it through with no deaths, and finishing the level briskly. Successfully completing those challenges grants you stars, which unlock bonus levels.

If you’re a fan of platformers, Leo’s Fortune is the best the App Store has to offer. Its levels are short enough that you can complete one when you just have a bit of time to kill, but the challenges add significant replayability and depth.

Platform games evolved over 30 years from simple 2D affairs that took place on a single screen into full-blown 3D adventures in which you traverse graphically rich worlds. In the era of touchscreen devices like the iPhone and iPad, game designers have had to start from scratch, rethinking every convention of the genre. Leo’s Fortune sets a new bar for touchscreen platforming games, and like Badland before it, draws a blueprint for what may become the conventions of this new sub-genre. I’ll be interested to see if other game developers follow in Leo’s rolling footsteps or come up with entirely different approaches to working within the constraints of relatively small touchscreens.