If you purchased the new, 2013-era Mac Pro, you might have been dumbfounded to discover that the tiny, yet expensive, desktop machine did not feature a standard security slot to prevent a ne’er-do-well from taking it off your desk.

Now Apple has introduced a solution: a $49 clamp-on Kensington lock adapter, which is compatible with most computer security locks and also prevents your Mac Pro from being opened. Unfortunately, for $49, you get only the bracket, not a lock to go with it, which will set you back another five to thirty dollars. 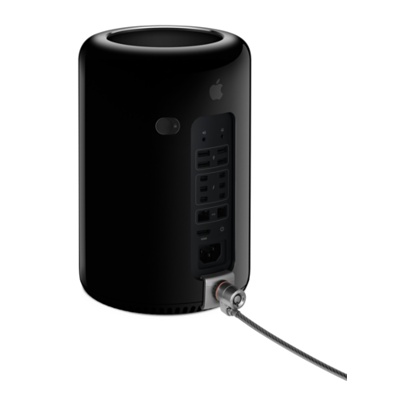 Given that the Mac Pro starts at $2,999, it’s a bit infuriating that Apple is charging another $49 for what should be a standard feature. On the other hand, $49 isn’t much to add a slight bit of protection to such an expensive piece of hardware (Still mulling over the cost of a Mac Pro? See Julio Ojeda-Zapata’s “Can a Normal User Justify a Mac Pro?,” 21 April 2014).

Hopefully Apple will offer a similar solution for the MacBook Air and the newer MacBook Pro with Retina Display, neither of which features a security slot.