For many of us, I might paraphrase Wallis Simpson’s saying as “You can never be too rich, too thin, or have too many ports.” As such, using a port-poor Apple portable can be a pain in the posterior.

MacBook Air users have it particularly bad with just one Thunderbolt port (compared to two on MacBook Pro models) and no HDMI port (there’s one on the MacBook Pro with Retina Display). No Macintosh laptop has more than two USB ports. An Ethernet port? Don’t be a silly.

Thunderbolt docks are a solution to this problem. They turn one Thunderbolt port into two, and add a variety of other ports such as USB, Ethernet, and audio. This greatly increases your expansion capability, with the option to charge and sync iOS devices via the USB ports, hook up speakers and microphones, make networking fast and reliable via a physical connection, add storage and external displays, and so on. 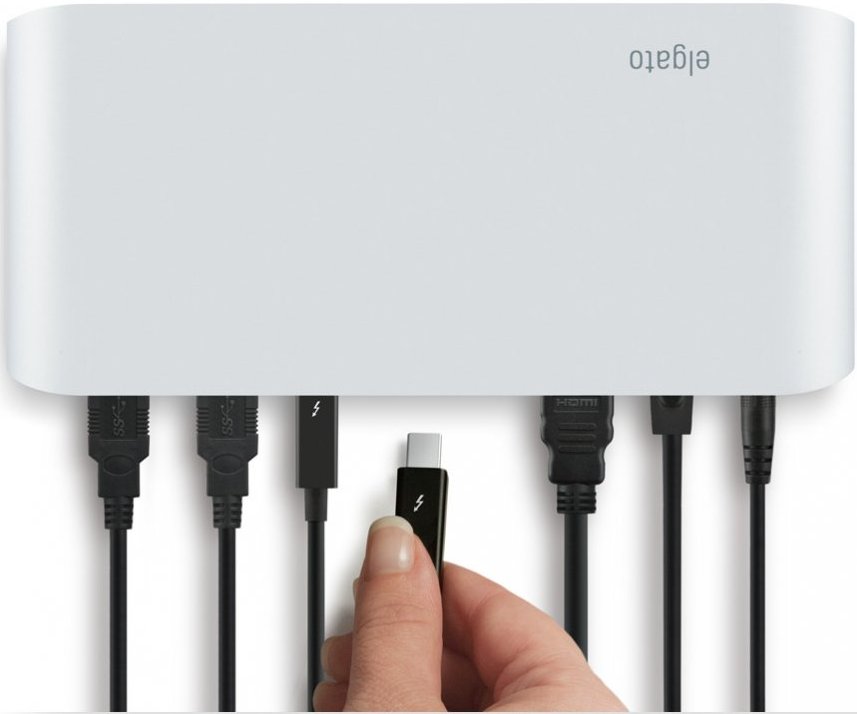 Expansion options do not end there. Thunderbolt is designed for daisy-chaining up to six devices per port, making it possible to string together multiple Thunderbolt devices (assuming all but the last in the chain also have dual Thunderbolt ports). At one point I went nuts and daisy-chained three Thunderbolt docks together. It totally works.

The Thunderbolt docks I tested using a MacBook Air are attractive and reasonably unobtrusive — and therefore handy desk units — but I would not characterize any as particularly portable, especially since you’d also have to lug around a bulky power brick.

I tested a Belkin version that is a bit of a beast but very elegant and versatile, along with an assortment of smaller Thunderbolt docks that are essentially the same as each other. That is because the vendors are working off one hardware design and adding minor variations. A number of other dock-like Thunderbolt devices are available, too. This is all great given how maddeningly sparse the selection of Thunderbolt peripherals used to be.

One important note: All the docks I tested are based on the original Thunderbolt spec, so Thunderbolt 2 devices plugged into the peripherals will perform at only Thunderbolt 1 speeds.

Belkin Thunderbolt Express Dock — This large, but elegantly designed, gadget offers a trio of USB 3.0 ports, a FireWire 800 port, a gigabit Ethernet port, a headphone port, and a microphone port along with two Thunderbolt ports. At $200, or $100 off its original price, it’s a bargain, too.

If you need to attach FireWire 800 storage devices to a new Mac, this is the dock for you, given that only the Mac mini and the 13-inch MacBook Pro (without Retina Display) still include FireWire 800 ports, and those are likely to disappear soon. The FireWire port in the Thunderbolt Express Dock worked well for me, as did all the other ports.

Thunderbolt docks can be used with external displays, just as if these were connected directly to the Macs. The Belkin dock, however, lacks one common means for linking up a display: HDMI. An alternative technology, DisplayPort, is supported.

The Belkin dock has a clever design. All ports are located on one of the device’s long sides, and you can point that part away from you to reduce visual clutter (which is soothing for this OCD sufferer). You can then feed only the cords you need through a rubber-sheathed canal cut into the dock bottom, and out a single orifice in the front. 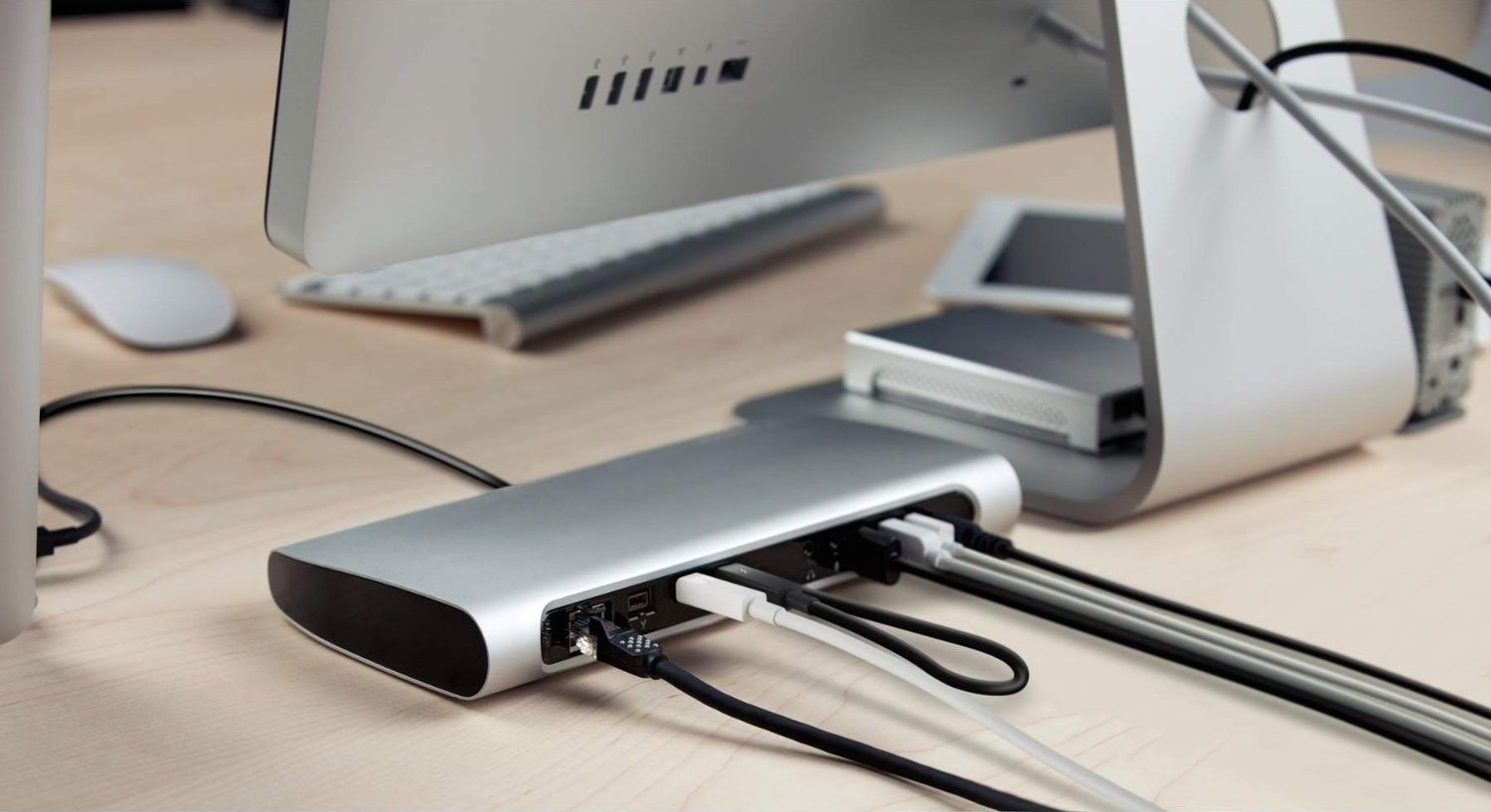 Attack of the Clones — When I stacked a bunch of other Thunderbolt docks, I noticed something weird: Cosmetic touches aside, the gizmos are identical. They have all the same ports in all the same locations, and their power supplies are even compatible. What was going on here? 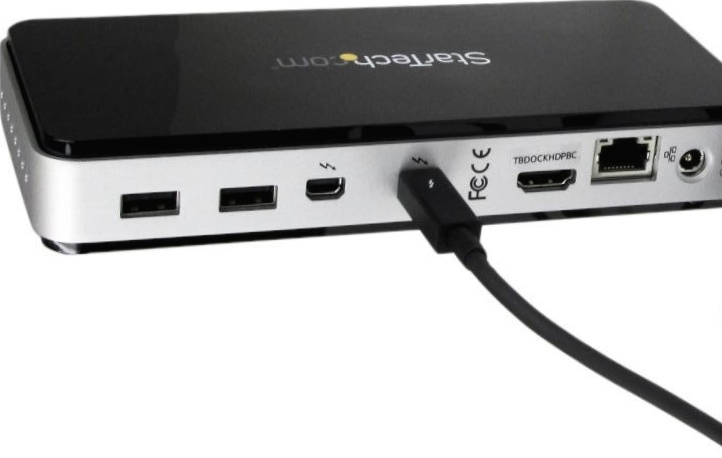 One of the dock makers cleared this up for me: “The docks are
all based on the same Intel reference design,” he said.

The docks each have three USB 3.0 ports, a gigabit Ethernet port, a headphone port, and a microphone port, along with those two Thunderbolt ports, but no FireWire 800 ports.

Predictably, there was little difference in how the docks worked. As with the Belkin dock, I could plug my MacBook Air into one Thunderbolt port on each dock, with the DisplayPort monitor connected to the other.

HDMI on each dock gave me another option: I could use that port for my monitor, while using one of the Thunderbolt ports for my Mac and the other for an external drive. But there’s a problem: the display’s resolution maxes out at 1080p or 1,920 by 1,080 pixels, which is great for a big-screen TV, but not great for a desktop display. Going the Mini DisplayPort route, I got 2,560 by 1,400 pixels.

Unlike the Belkin dock, which is big enough for all of its ports to be positioned on one long edge, the three dock clones put a trio of ports — audio out, audio in, and one of their three USB ports — on the front. This looks understated and elegant.

In terms of styling, the units run the gamut. The CalDigit model is brushed aluminum in its entirety, matching Apple’s notebooks. The StarTech model has my least-favorite aesthetic with shiny black plastic along the top and bottom, and light-colored metal along all the edges. The Elgato is the opposite, with light-colored metal wrapping around the unit’s longer axis, and black front and back where all the ports go — I find this more attractive than StarTech’s approach.

The docks, as noted, have minor feature differences. StarTech’s dock includes a stand for those wanting to position the unit vertically. 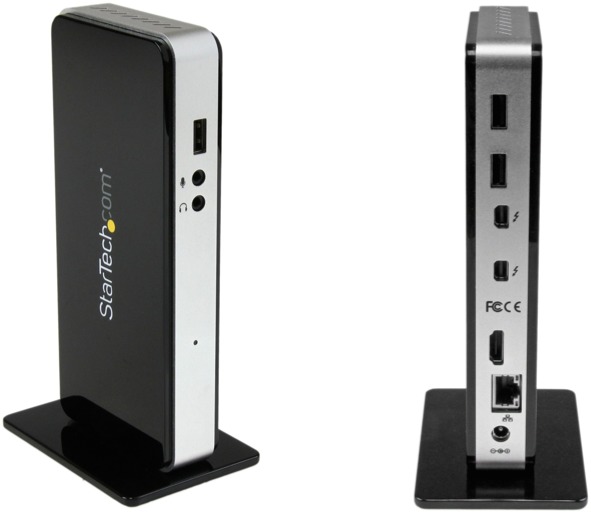 Elgato told me it “has fixed a nuisance bug of the reference design by eliminating the irritating buzzing noise that the hardware makes when the Mac is no longer connected to the Dock.” The company tosses in an Elgato Thunderbolt Dock software utility that ejects all connected storage devices at once with a click in the menu bar “so you can immediately see when it’s safe to unplug your Thunderbolt Dock and avoid potential data loss.”

The Desktop Dimension — Thunderbolt docks are positioned as laptop accessories, but there’s nothing keeping you from using them with a Thunderbolt-equipped desktop computer. Since Apple stubbornly continues to make its iMac ports semi-inaccessible by placing them all in the back, connecting a Thunderbolt dock to one of the computer’s two Thunderbolt ports can make things more convenient while adding additional USB ports. 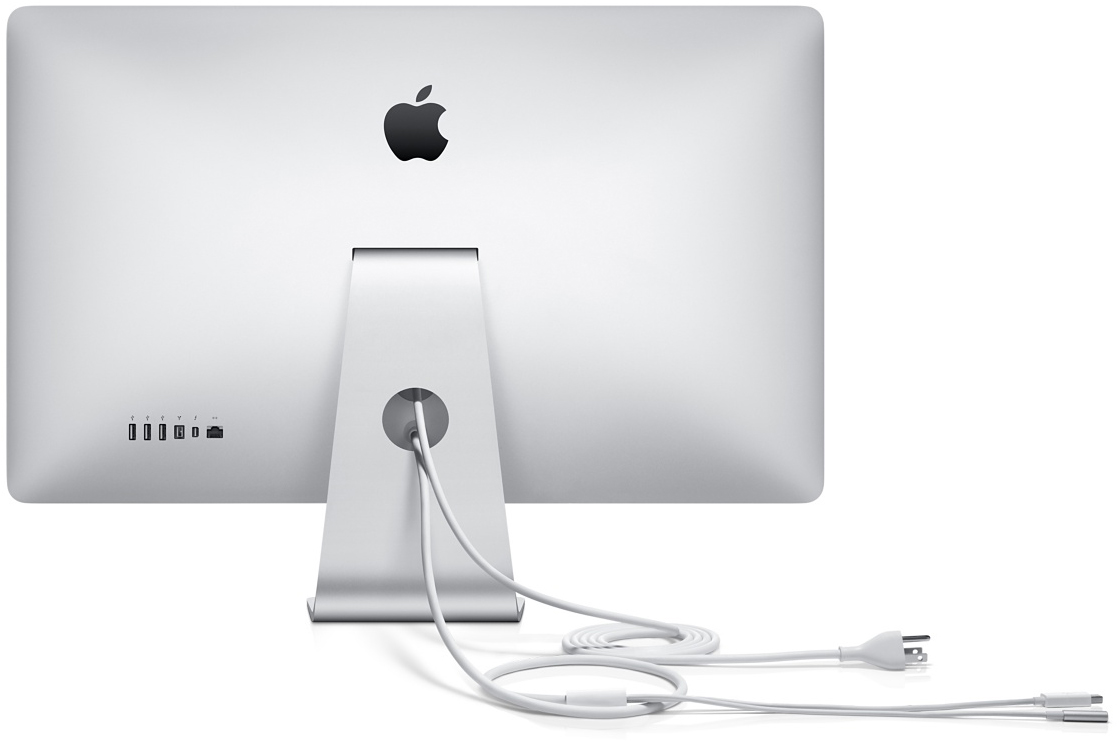 This hot display is my dream Thunderbolt setup after several Apple-loaner sessions over the product’s three-year lifespan, but it’s a pricey one at $1,000. Plus, a Retina Display model is surely coming down the pipe sooner than later.

More Thunderbolt Docks — Dock-style Thunderbolt peripherals extend beyond the ones I was able to test for this article, but some don’t seem worth pursuing while others fit more-specialized needs.

Matrox’s DS1 dock does not seem like a good deal at $250 because it has only one Thunderbolt port (along with one USB 3.0 port, two USB 2.0 ports, an Ethernet port, and audio in and out).

Henge’s Apple notebook docks ($70 to $119) also incorporate Thunderbolt capability. You drop a MacBook Pro or MacBook Pro with Retina Display vertically into one of the docks, with integrated Thunderbolt plugs hooking into the notebooks’ corresponding ports. The docks then provide Thunderbolt ports of their own so you’re not out any expansion capability. 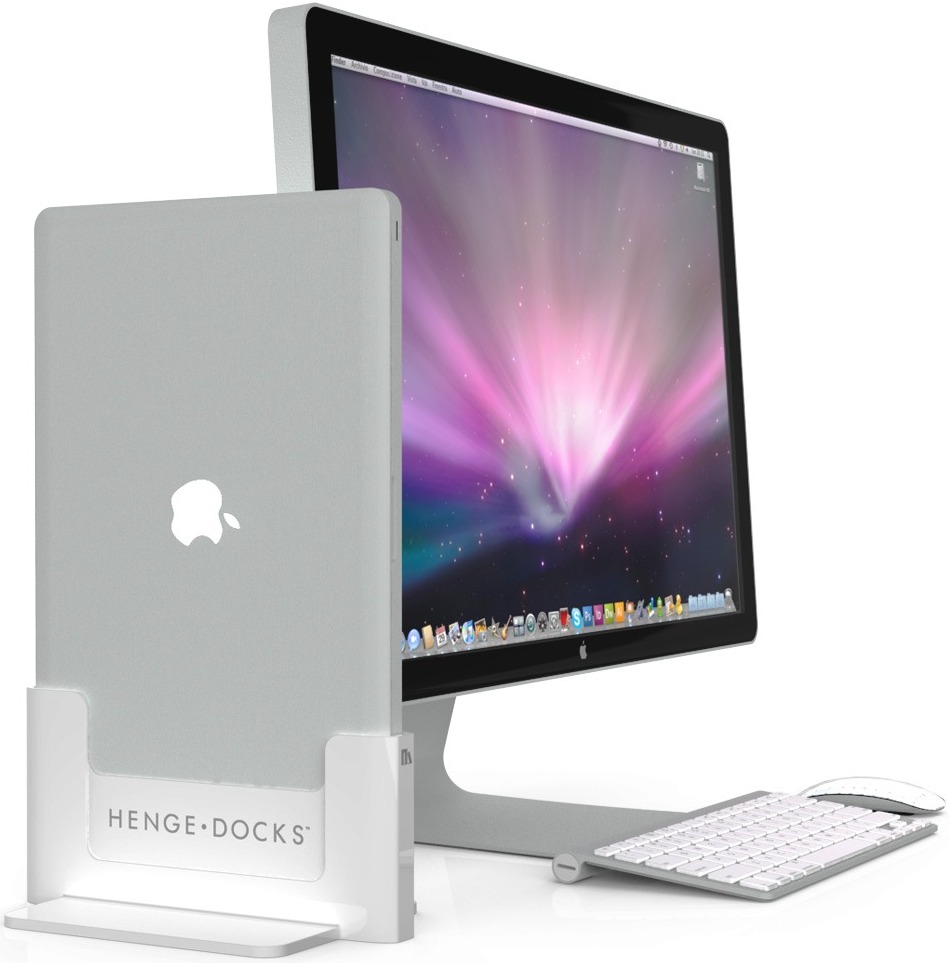 Sonnet’s Echo 15 Thunderbolt Dock means business with a couple of Thunderbolt 2 ports along with dual eSATA ports, four USB 4.0 ports, dual audio inputs, dual audio outputs, one gigabit Ethernet port and a FireWire 800 port, plus built-in hard drive and optical (DVD-burning or Blu-ray) drive, at $400 to $650 depending on specs. What, no beer dispenser?

If the eSATA-compatible Echo 15 is overkill for you, but you want eSATA connectivity, Kanex’s $80 Thunderbolt to eSATA + USB 3.0 Adapter may be exactly what you need. As its name suggests, the compact gadget incorporates a Thunderbolt cord along with an eSATA port for plugging in an eSATA drive. It also has a single USB 3.0 port.

Kanex also offers a Thunderbolt-to-gigabit-Ethernet adapter (shown in the image below).

Akitio’s Thunder Dock is another compact Thunderbolt dock, though apparently based on a design different from the one used by CalDigit, Elgato, and StarTech. This unit, which looks a bit like a compact portable hard drive, builds in two Thunderbolt ports, two eSATA ports, one FireWire 800 port, and two USB 3.0 ports in a “rugged aluminum case.” Given what it offers, the $269 price tag seems more than reasonable. Cable placement seems awkward with ports on three of
the four dock edges, though. 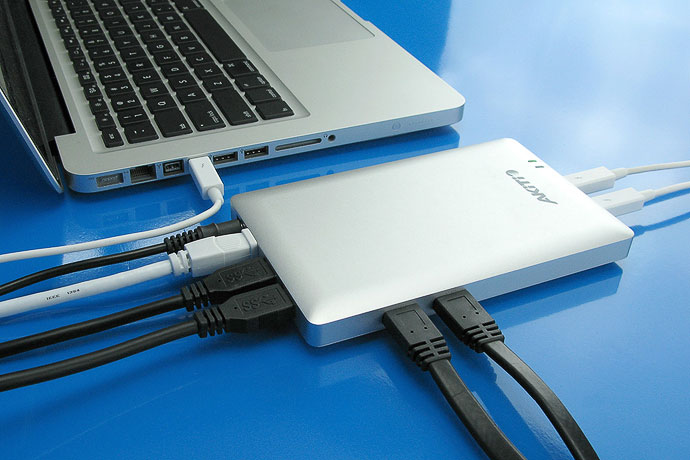 Which Dock Would I Pick? — I like the Belkin dock’s cable-managing design the best, though it is on the bulky side. Its FireWire 800 compatibility comes in handy, too, since I have a number of such storage devices. I’ve been slowly phasing out that old storage technology, though, so I’m inclined to go with one of the dock clones with HDMI capability, which the Belkin dock lacks. One other Belkin ding: A Thunderbolt cable isn’t included.

Picking among the clones, I’m inclined to show a bit of brand loyalty and go with Elgato since I’ve been happily using a bunch of that company’s products — TV-tuning dongles, SSD storage, Bluetooth keychain fobs, video-capture peripherals — for years.

Since the dock clones are all but identical, though, they are all fine products. Keep tabs on the makers’ sites for price fluctuations, and pounce if any of the docks sees a temporary or permanent price drop. You’re golden regardless.

Akitio’s Thunder Dock has me intrigued, too, with a seemingly killer blend of Thunderbolt, FireWire 800, USB 3.0 and eSATA (but zero Ethernet) in a compact package. I hope to get a look at this product soon.

Comments About Mac Thunderbolt Docks: Belkin Versus the Clones