I’ve written extensively about the challenges of adapting traditional game genres to touch screens (see “FunBITS: Leo’s Fortune Perfects Touchscreen Platforming,” 27 June 2014). Perhaps no genre is worse served in the age of touch than that of the fighting game, where two characters square off on screen, jumping around and exchanging punches, kicks, and other attacks.

Not that it hasn’t been tried. Capcom adapted Street Fighter IV to the iPhone with onscreen controls, but the result is laughable. While fighting games seem simple on the surface, they may be the most difficult genre to master. Anyone can mash buttons for frenetic gameplay, but advanced tactics like special moves, combos, and counters require absolute precision, so much so that even gamepads aren’t quite good enough. Dedicated players often shell out for arcade-style fighting sticks to reach that level of precision.

Each of the game’s 50 stages is set up like a traditional fighting game. Your character squares off in an arena with an opponent, attempting to land blows that will drain the other’s health bar. But instead of mashing buttons to perform attacks, you tap onscreen circles, called Notes, in time with the beat of the background music. 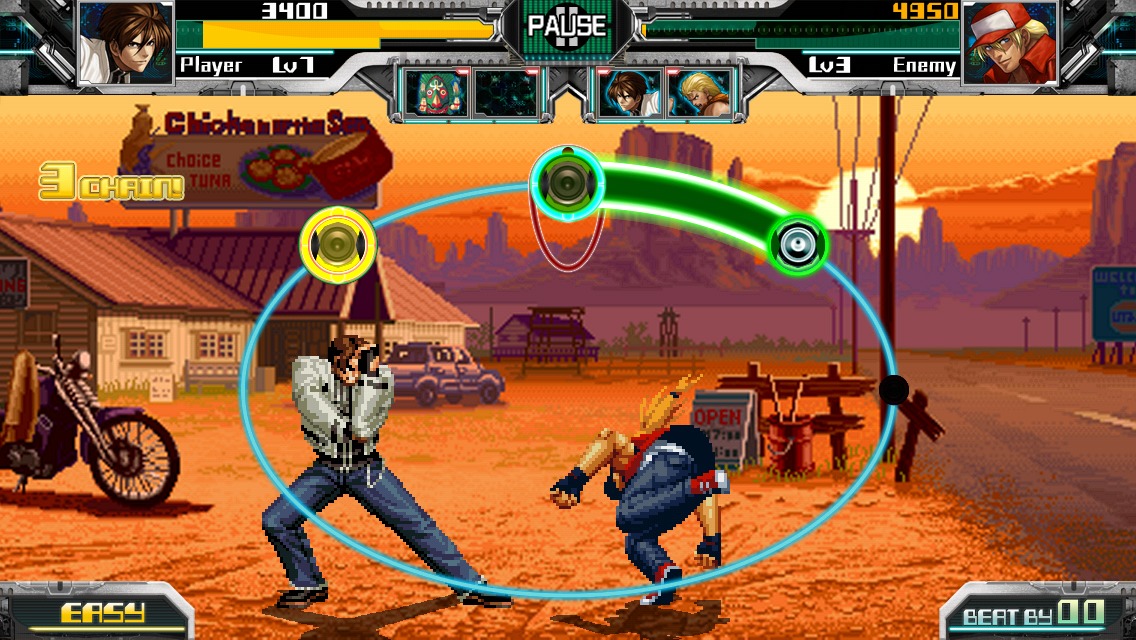 There are several kinds of Notes that require different invocations, resulting in different fighting moves. You activate Tap Notes by simply tapping the screen. But timing is key. An outline appears outside of the Tap Note and shrinks around it. The right time to touch the screen is when the outline meets the edge of the Tap Note. Then there are Flick Notes, which are like Tap Notes, but specify a direction to flick instead of tapping. Most important to master are Long Notes, which follow along an onscreen track. You
must first press at the right time, then release when the Long Note reaches the end. Perfectly executing a lengthy Long Note unleashes a devastating combo on your opponent. Some Long Notes also end in a Flick Note, so you have to stay alert. 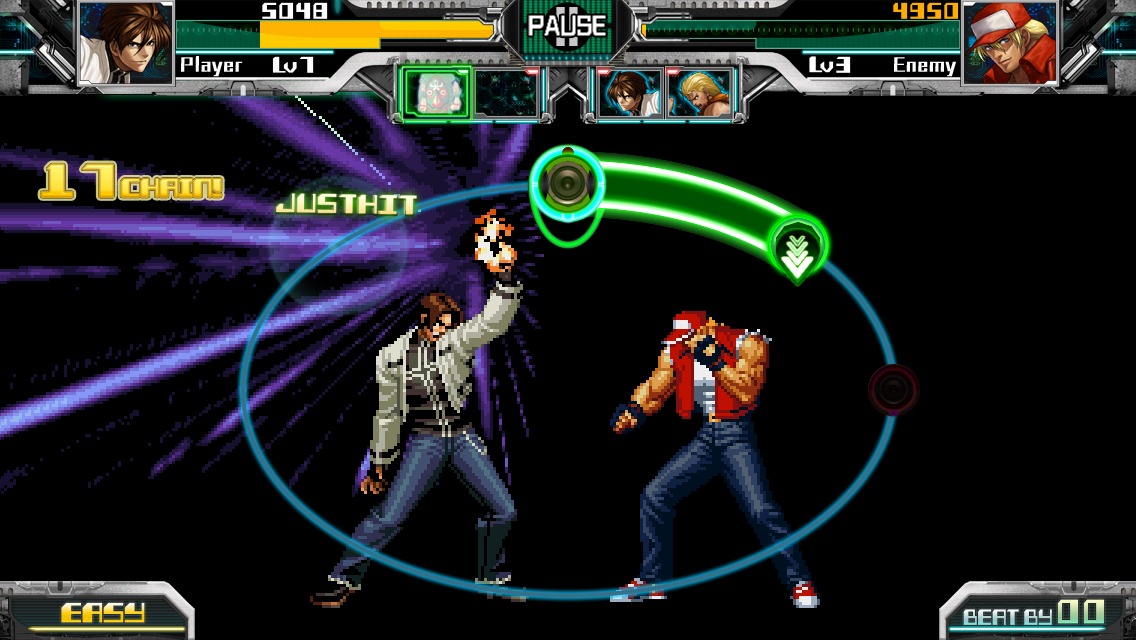 But knocking out your opponent isn’t actually the objective of The Rhythm of Fighters. Instead, you’re trying to prevent your opponent from knocking you out for as long as the music plays. Successfully attacking your opponent prevents her from hitting you, but missing Notes leaves you wide open to attack.

The main problem I’ve encountered is that my taps are occasionally ignored, causing me to miss Notes and absorb punishment my character doesn’t deserve. I hope this frustrating bug can be resolved in a future update.

While fans of The King of Fighters may be thrilled with this game, I find the fighting game aspect a distraction, since the fight has little to do with the gameplay. While the concept is interesting, it could be so much more. For example, two-player fights are a must in a fighting game, but The Rhythm of Fighters offers no multiplayer option, which would have made the game unique.

However, The Rhythm of Fighters does offer some unusual aspects that add depth. There’s a leveling system, which makes your character more powerful as you play each stage. As you complete stages, you also unlock support characters, each of which enhances your character by enabling him to regenerate life or deal more damage. 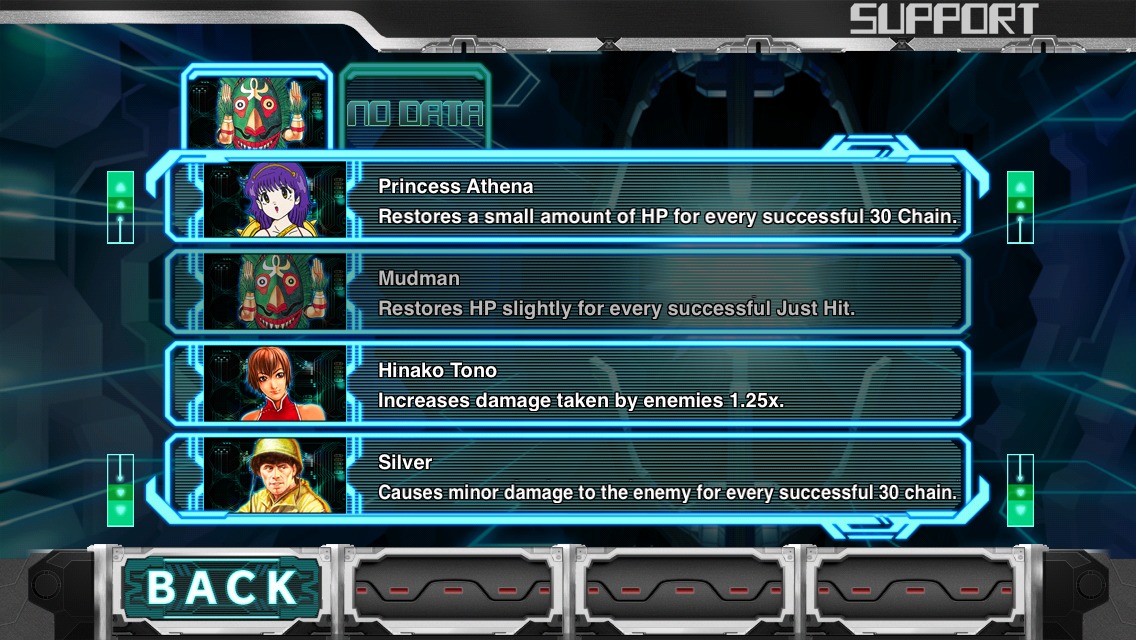 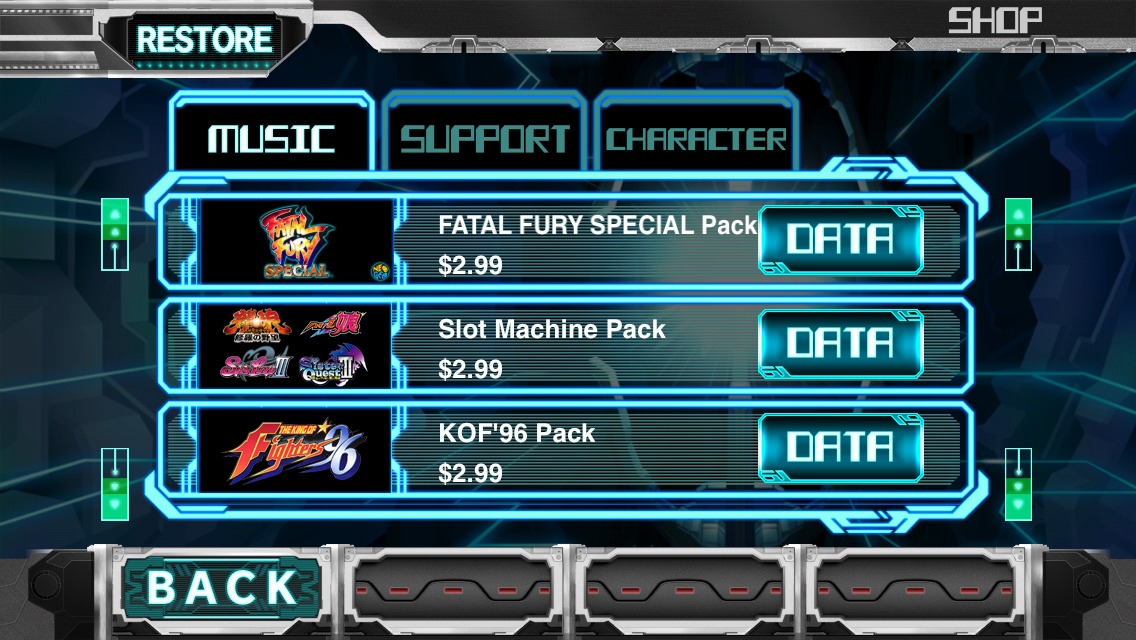 The Rhythm of Fighters is an interesting experiment. By itself, it’s a fun rhythm game (despite the frustrating bugs), and a must-have for anyone who loves The King of Fighters series. But as a fighting game hybrid, it could be so much more than a knockoff of Elite Beat Agents. Despite that, it’s a fun distraction for 99 cents.

Comments About FunBITS: The Rhythm of Fighters Beats the Beats