Zack Brown’s Kickstarter project to fund a potato salad has had barrels of virtual ink spilled about it, as well as endless tweets, Facebook posts, Tumblr entries, and the like. It made some people angry, who believe the joke is in bad taste when so much starvation exists in the world. 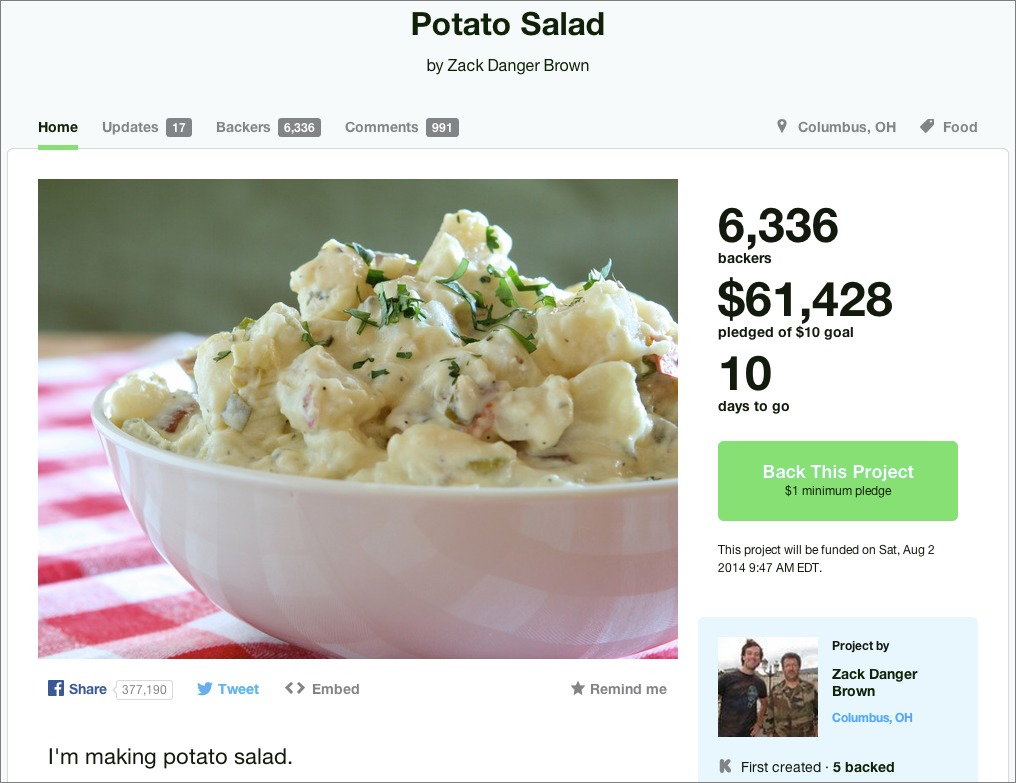 But there’s no indication Brown intended to mock those without food. Rather, he was making a joke, and as so often happens on the Internet, it tickled a sufficient number of funny bones to tip over from a chuckle to a guffaw. Over 6,500 people pledged on their credit cards to make the project funnier by making it bigger. A bowl of potato salad isn’t amusing; imagining a hockey rink full of potato salad is.

Brown’s success spawned a legion of imitators. Hundreds of campaigns promise potato salad, macaroni salad, a burrito (“because nobody wants potato salad”) and so on. However, unlike Brown’s project, the vast majority of these coattail riders have received little or no funding.

The high number of pledges given to Brown’s jape reminds me of The Million Dollar Homepage, a clever site created in 2005 by Alex Tew, then a 21-year-old resident of Wiltshire, England. He sold pixels for $1 apiece in minimum units of 10 by 10 ($100) for graphic advertising that he guaranteed would remain active at least through 26 August 2010. The page remains alive to this day, having outlasted many of the sites advertised on it.

After a modest start, online news sites and then mainstream media picked up the story, amplifying it, and Tew sold out within a few months. (He grossed slightly above $1 million by auctioning the last 1,000 pixels for a winning bid of $38,100.) Within moments of Tew’s project receiving attention, similar efforts appeared, and some sites that already featured advertising reserved long-term or permanent space for similar campaigns.

The viral spread of jokes and ideas, some of which are accompanied by revenue, date back to the first academic networks that allowed easy forwarding of information. The scale has become ever larger, but the first-mover advantage remains: no subsequent million-pixel page or similar project raised even a fraction as much as Tew’s and it is unlikely any subsequent potato-salad fundraiser will ever cut through the thick layer of similar projects.

Both Brown’s campaign and the legion of lookalikes and parodies arrived on Kickstarter after the popular crowdfunding site lifted its strong review procedure, loosening the standards as to what is acceptable and allowing most campaigns to launch without a person taking a look at the details.

That may seem undesirable at first. Yet the market’s invisible hand (holding a spoon in this case) has produced exactly the desired result, predicted both by the power-law distribution principle espoused by Clay Shirky in a 2003 essay and by the notion of the wisdom of the crowd, which Kickstarter maintained would sort out any troubles.

By being first, Brown’s potato salad has garnered most of the attention for joke Kickstarter projects, and under Shirky’s formulation, “In systems where many people are free to choose between many options, a small subset of the whole will get a disproportionate amount of traffic (or attention, or income), even if no members of the system actively work towards such an outcome.”

In this case, although there’s no telling what quirk caused attention to focus on Brown’s gag, the subsequent reportage and social media interest further promoted Brown’s unique Kickstarter URL, drowning out all competitors, even those who might have had a funnier joke.

The wisdom of the crowd prevails as well, in that the hundreds of knockoff campaigns aren’t receiving funding, despite the ease with which they were produced and launched. The simplicity of making a Kickstarter fundraising page doesn’t equate to a business plan, accidental or otherwise. After Brown’s campaign ends, it’s likely potato salad-like projects will disappear as well, and if others are launched, that they will be ignored completely.

Perhaps this will be a lesson to future trailblazers and those that follow them: one can’t simply duplicate a campaign on Kickstarter and take advantage of consumer confusion in the way that it’s possible to do with similar product names on Apple’s App Store (cf. variations on Flappy Bird) or other environments in which a site’s search engine dominates over social and media referrals.

Brown will face the price of success, however large his potato salad project scales from here. Having set his reward descriptions to be local, humorous, and predicated on a small number of backers, he currently faces the task of reading aloud over 6,500 names as he makes the salad and somehow delivering a bite of potato salad to roughly 3,000 far-flung people. Mayonnaise doesn’t travel well through the post.