I’m fond of Amazon’s Kindle Fire tablets, even though they wouldn’t be my first choices. They’re attractive, with lovely high-resolution screens, have a slick — if dumbed-down — operating system based on Google’s Android, offer easy access to all of my Amazon digital assets (I have lots), and provide a frictionless pathway to the company’s vast storefront so I can buy, buy, buy more apps, ebooks, music, movies, and more.

Amazon has now adapted this formula to the smartphone category with the release of the Amazon Fire Phone, intended to go head-to-head with Apple’s iPhone and a host of Android-based handsets.

I’m not sure an Amazon phone makes as much sense, though. Phones are vastly more important than tablets for most people, and therefore need to offer maximum versatility and flexibility. The Fire Phone fails in this regard.

It’s physically as elegant as its tablet siblings, but bereft of the capabilities and apps that make its Apple and Android smartphone rivals so useful. The new features it brings to the table are largely software gimmickry of scant practical value. At least for me, living within Amazon’s walled garden is not overly irksome on a tablet, but on a smartphone I found it maddening.

Marquee Features — The Fire Phone’s major selling points are a set of software features installed on what is largely unexciting hardware.

One of these is called Dynamic Perspective, a kind of 3D enhancement made possible by five cameras on the front of the device, one at each corner, plus the standard camera at the top. The extra cameras track your head relative to the handset’s position and angle, enabling a number of visual effects that make for cool eye candy.

For instance, the Fire Phone’s various whimsical lock screens change perspective when you tilt the device so that you seem to peer around the edges of a moon, airborne balloons, Easter Island statues, and the like. Neat, but not terribly useful. You can see the same effect in certain games, or in Amazon’s Maps app, when viewing landmarks like Minneapolis’s iconic downtown IDS Center skyscraper. Again, so what? (Apple’s parallax effect is no more useful.) 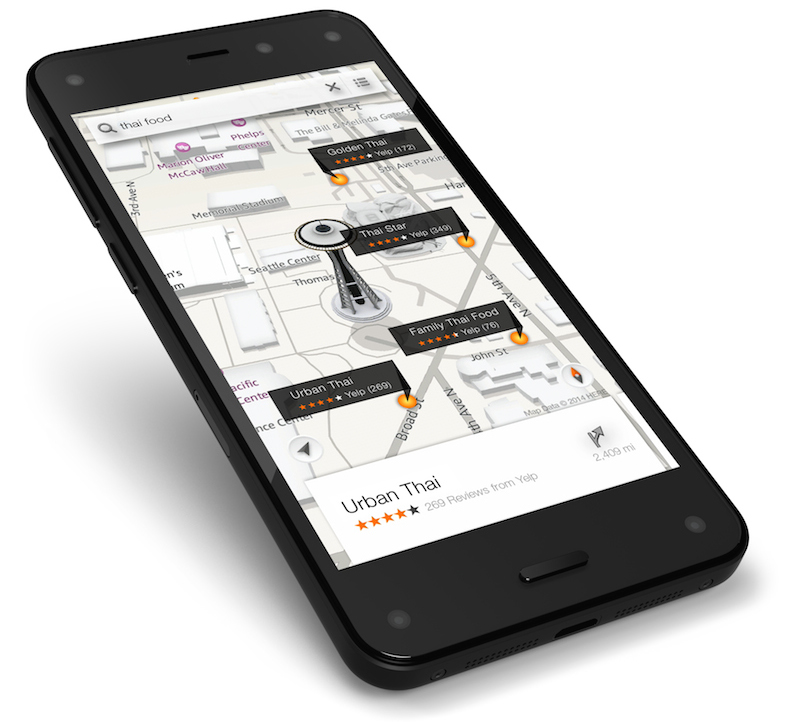 The other big Fire Phone software goodie, called Firefly, makes the phone seem semi-sentient in the sense that it can use its camera and microphone to recognize many sights and sounds: product packaging in stores, barcodes, book covers, songs, television-series episodes based on their audio playback, famous paintings, and more. It can identify phone numbers, URLs, and email addresses, as well. 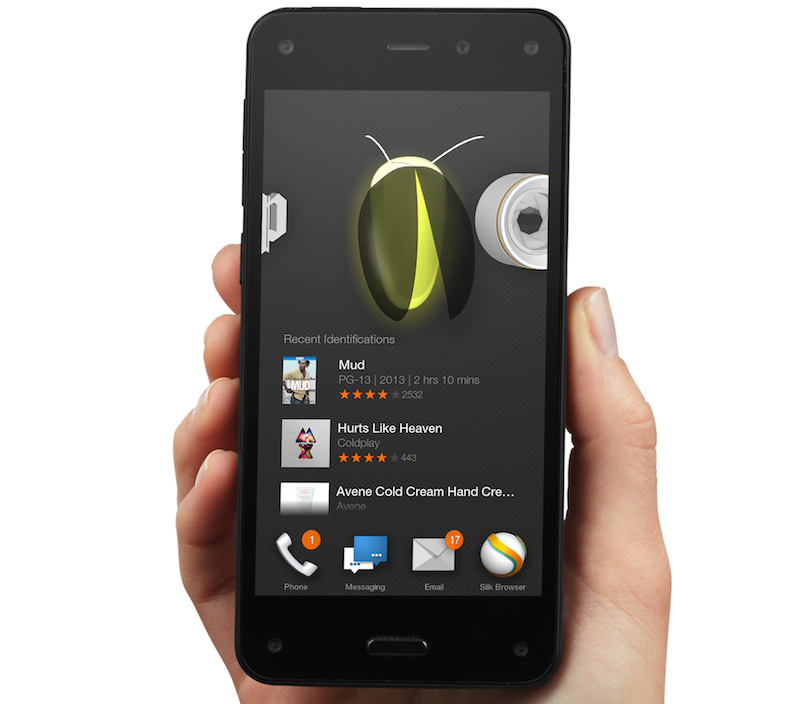 Firefly is nifty, but also sneaky, since many of its uses turn out to suggest Amazon purchases. I found it to be inconsistent, too. Firefly recognized one print of a painting on my wall, by Gustav Klimt (and, yes, it had a Klimt-related book to suggest for purchase), but not another by Paul Gauguin. And since most of Firefly’s features can be replicated on iOS and other devices using certain apps, it seems hardly earthshaking.

Other software features are handy but neither indispensable nor groundbreaking. Flicking the Fire Phone a certain way makes a control panel come up. Certain tilting motions reveal a left- or right-hand slide-in menu that is relevant to whatever app is on the display. Other tilting motions cause ebook text or Web pages to scroll upward or downward. It has all been done before, and is no more convenient than using your fingertip. 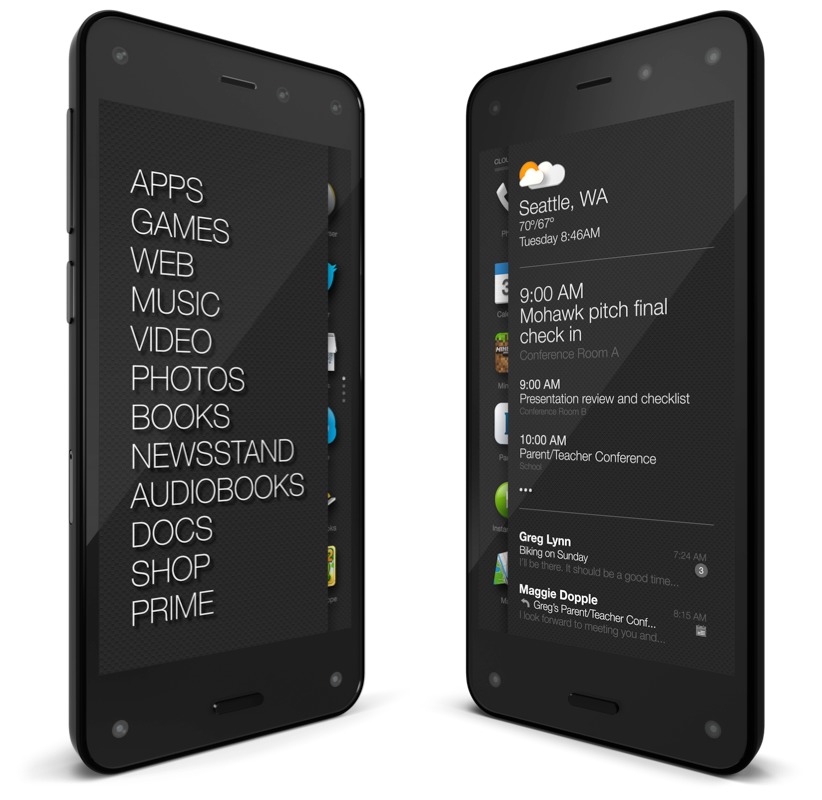 Mayday, the feature introduced on the Kindle Fire tablets for contacting a tech support staffer via a video window and letting that person configure the device remotely, is available on the Fire Phone, and is potentially a lifesaver, particularly for tech newbies. But for those who don’t regularly need help with tech devices, it’s no more helpful than knowing you could call AppleCare, even though you know you’re not going to. 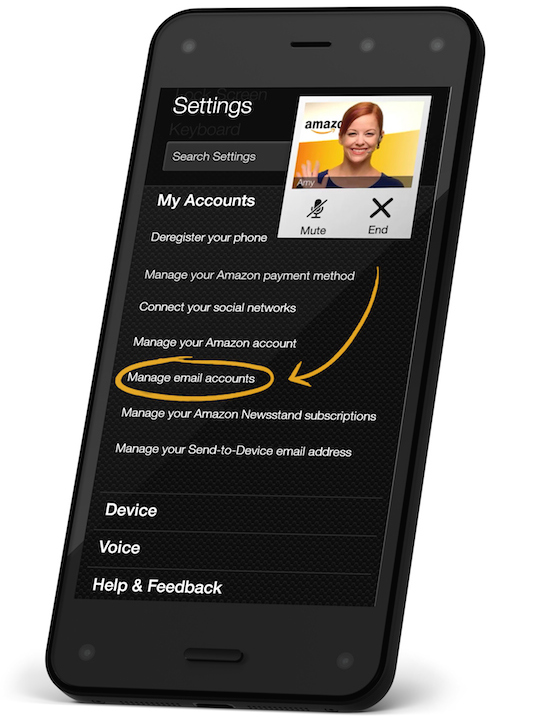 Hardware — Physically, the Fire Phone is attractive, though hardly distinctive. It is black, with a high-resolution 4.7-inch screen (1280 by 720 at 315 pixels per inch), rubberized edges for better gripping, and Gorilla Glass on the front and back. This final design element is potentially unfortunate given the problems that the iPhone 4 experienced with its back glass breaking.

There are a few swell touches, such as a decent 13-megapixel camera with optical image stabilization and a physical shutter button that also (with a press and hold) fires up Firefly. The camera features a lenticular option; it prompts you to shoot sets of three pictures with slightly different perspectives to create quasi-3D slideshow that you control with handset tilts.

Photo enthusiasts also get a big bonus: free, unlimited cloud backup for all their photos (but not videos), in full resolution, forever — or, at least, as long as they have their Fire Phones.

Note that the Fire Phone is exclusive to AT&T, an echo of the first iPhone. AT&T happens to be my carrier, and I’ve been happy with it, so I have no issues in this regard; your mileage may vary, depending on where in the United States you live. It’s not available in other countries yet.

Android and Apps — With nothing in the hardware or software I’d regard as a game-changer, the Fire Phone’s limitations are thrust into sharp relief in comparison to the iPhone and stock Android smartphones.

Consider the Fire OS, Amazon’s Android-based operating system, which bears scant resemblance to the powerful, flexible stock version of Google’s mobile OS. I am not a fan of Fire OS, notable for a carousel feature showing recently used apps and features in a rotating format (it suffers from arbitrary linearity). There’s also a standard grid view, but the Fire Phone has far fewer customization options than stock Android. This makes it too limiting for me, but an average user may not mind. 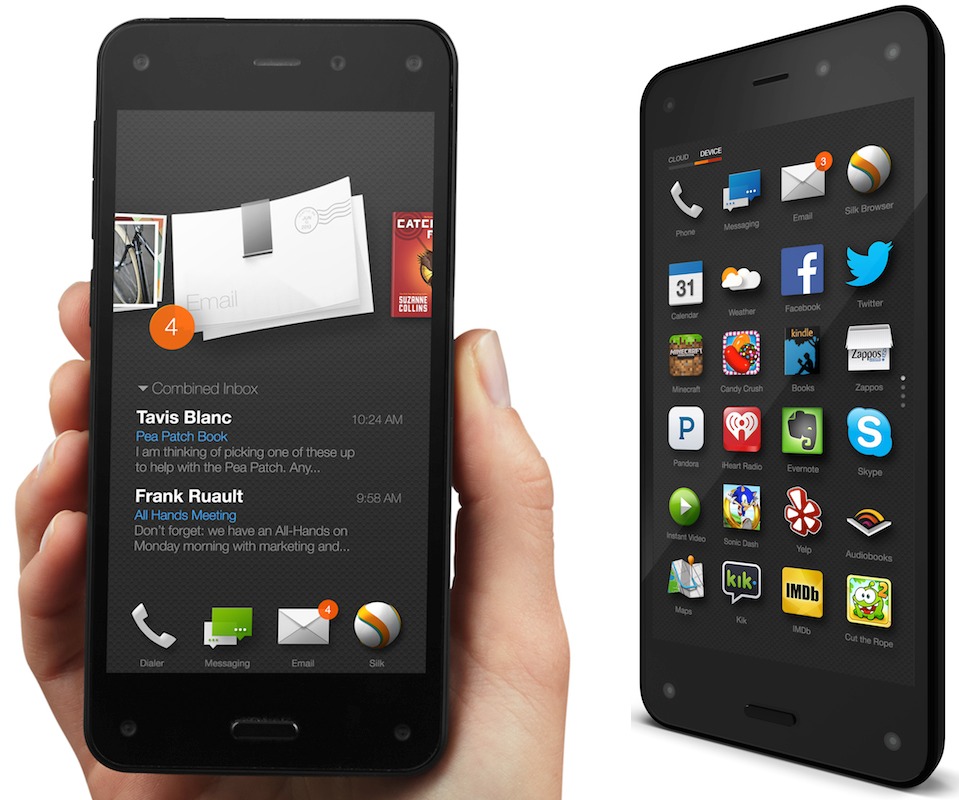 My big problem is how Amazon removes a lot of stuff from stock Android, but does not always provide adequate substitutes.

Virtually everything Google has been scrubbed from the device. Users can’t download such standard apps as Gmail, Google Maps, and YouTube from Amazon’s Appstore, an operation that is separate from Google Play. Amazon’s own Nokia-based Maps app works reasonably well, and third-party YouTube apps are readily available.

But I couldn’t find a good Gmail substitute, and Amazon’s own mail app would take settings only for my personal Gmail account, not for my Google Apps-based corporate mail account.

Although the Fire Phone has a voice-activated personal assistant, it’s nowhere near the equivalent of Siri, Google Now, or Microsoft’s Cortana. Hmm, I wonder if I could ask the Mayday rep when Godzilla is playing near me?

Third-party app selection is another big problem. Users have a good chance of finding the apps they need among the nearly 200,000 Amazon makes available, but there are distressing gaps. I could not find Pocket Casts, the podcast client much beloved by iPhone and Android users alike. Other major omissions include Camera Awesome, Hulu Plus, Path, Snapchat, SwiftKey, Yahoo News Digest, and others. And some apps exist, but haven’t received recent updates to match those in Google Play. Fortunately, new apps are being added to Amazon’s Appstore all the time; Microsoft’s OneNote is one of the latest.

Bottom Line — While I could see myself happily integrating a Kindle Fire tablet into my life, I have a different and decidedly negative take on the Fire Phone.

I’d go insane trying to use it long-term, partly because of senseless limitations, and partly because of prominent yet marginally useful features like Dynamic Perspective and Firefly. They’re little more than distractions for me.

That said, the Fire Phone may not be a lost cause. After all, Amazon’s first Kindle ebook reader had a variety of notable problems, but improved generation after generation. Today’s Kindle Paperwhite reader is fantastic. The same goes for Amazon’s color touchscreen tablets, initially bulky and clunky, but now delightful examples of industrial engineering.

Even the Fire Phone’s software gimmicks have promise, since Amazon is opening them up to independent developers. I’m curious to see how clever coders will put Dynamic Perspective and Firefly to unexpected uses.

There is an additional bonus with a Fire Phone purchase: one year of the Amazon Prime free shipping, media streaming and ebook borrowing service, normally $99.

Yet, for now, the Fire Phone is one to avoid. I suppose it might be appropriate for an Amazon fan so ardent and devoted that he or she is willing to make huge sacrifices to live entirely within the Amazon ecosystem. I can’t recall ever meeting anyone who even remotely matches that description.

Comments About Amazon Fire Phone Too Limited and Gimmicky