Long before podcasts, I was a fan of talk radio. But — and I realize this might sound like sacrilege — I’ve never been a fan of National Public Radio. The slow, hypnotic voices (except for the overly exuberant Car Talk guys); the exceedingly long stories on things I’m not that interested in; the random artsy interludes; the zzzZZZZzzzZZZzzzzZZZ.

Oh, sorry. Where was I? Ah, yes, the problem is that most of the people I find to be well-informed in matters of the world are ardent NPR listeners, so I keep trying again and again to listen. I’m not alone in that; a 2007 NPR document stated, “We have learned in focus groups with younger listeners that they are interested in many of the topics that NPR covers, but often find the programming boring or staid.” Yeah, I’m a millennial, and I realize I’m on someone’s lawn.

So how can NPR reach Nintendo-addled whippersnappers such as myself, saving us from the screaming heads of 24-hour cable news channels and the latest trivialities from the Kardashians? NPR has taken a page from the online radio service Pandora to launch NPR One, a free service and iPhone app that delivers a semi-random assortment of news stories.

When you first launch the app, which requires iOS 7, you’re given a quick video tutorial, then asked to sign in via Google+, Facebook, or an NPR.org account. Since I didn’t have the patience to create a new account, I opted to log in via my iPhone’s linked Facebook account. Although nothing was said about how NPR One would use or share the data, I worry a little about surrendering my media-consumption tastes to the tender mercies of Mark Zuckerberg’s algorithms.

NPR One automatically identifies your nearest member station so it can blend in local content and better tailor the playlist to topics that interest you. And of course, hit you up for donations, which are mixed into the ads between segments.

What I love about NPR One is that when I open the app, it automatically plays the latest hourly newscast, so I can keep up with world events outside my tech bubble with a minimum of fuss. However, if you wanted to pick up on a story you weren’t finished with, you might find this annoying. All content is streamed, so while you can listen in the car, be aware that you may be chewing through your cellular bandwidth.

Playback controls are uncluttered and will be familiar to fans of Pandora. There’s a 15-second rewind button, a Play/Pause button, and a skip button. You can also drag your finger along the scrubber to skip to a specific place, a feature executed with excellence. When you touch the bar, it zooms to take up the entire screen, simplifying precise placement. 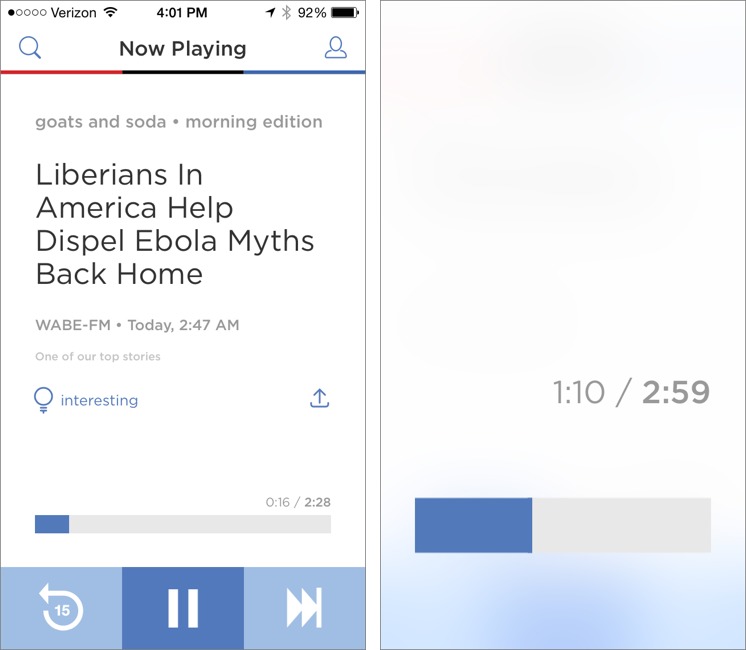 If a story doesn’t capture your interest, tap the skip button to move on to the next one. This is where you start to realize the genius of the NPR One app. Just as you’ve long been able to scan a newspaper’s headlines and ledes to get the gist of stories (they’re deliberately written this way because publishers realize we’re lazy), you can now do the same with audio news.

The skip button, like most of the controls, is nice and large. If anything, it’s a bit too large, since it’s easy to tap accidentally and move on to the next story, without an easy way to go back.

A few other buttons are so small they’re frustrating to tap, such as the “interesting” button (it would be weird to “like” an Ebola outbreak), which tells NPR One which stories you’d like to listen to, and the share button, which I can never hit on the first few tries.

If you don’t want to restrict yourself to NPR’s algorithmically driven (and thus somewhat random) selection, you can also search manually. The search works fine if you know what radio show or NPR podcast you want to find, but the handful of suggestions don’t help much in discovering new material. Alas, there’s no directory to browse, leaving me listening to things I already know or that are played for me — NPR would do well to add browsing.

But the lack of a directory doesn’t detract from the otherwise brilliant NPR One. Its developers have figured out a way to deliver NPR content to listeners who are accustomed to quick news snippets on Twitter and Facebook. As someone who rarely has time to listen to podcasts anymore, it’s great to have an endless source of news to listen to for a few minutes at a time.

Comments About FunBITS: NPR One Is Public Radio for the Twitter Generation