On 11 August 2014, Oscar-winning actor and comedian Robin Williams died, of an apparent suicide. Apple CEO Tim Cook posted a rare tweet with his condolences, and Apple made the unusual decision to honor him on its Web site. But maybe that shouldn’t come as a surprise, since Williams’s voiceover from the 1989 “Dead Poets Society” kicked off Apple’s Your Verse ad campaign.

But we also know that Williams was something of an Apple fan, attending Macworld Expo in 2005 and again in 2007. In fact, our own Jeff Carlson nearly bumped into him — literally — at the 2005 show. 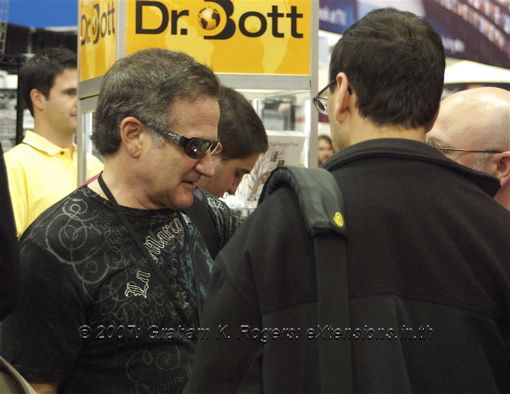 Back when Macworld Expo was a much bigger event (when that was the way Apple revealed all of its important new products), you’d occasionally see celebrities who were just as geeky as us. One year as I was walking the crowded aisles, I nearly collided with a man in a hurry. In a split second I recognized Robin Williams, loaded with tchotchkes and smiling his wide grin. I could tell this was the speed he needed to use to see the show floor without becoming trapped by dozens of fans. As he rushed by, a woman behind me yelled, “We love you Robin!” He smiled even more broadly, but kept on moving.

Robin Williams was one of the funniest comedians and best actors of our time, and it makes this sad news all the more poignant to know that in some ways, he was just like the rest of us.

(Of course, the Mac world has another Robin Williams, the woman best known for penning “The Little Mac Book,” “The Mac is Not a Typewriter,” and numerous other books about the Mac, desktop publishing, Web design, and Shakespeare. Last we heard from her, she’s alive and well.)

Comments About RIP: Robin Williams, One of Us