It used to be a standard part of my vacation to send postcards to friends and family so I could let them know I was having a better time than they were. These days, however, between the ever-rising cost of postage stamps, the gradual disappearance of corner mailboxes, and the increasing ubiquity of both smartphone cameras and Wi-Fi, my postcard-picking vacation ritual has fallen into desuetude. However, not all of my friends and family are as tech savvy as I, nor are emailed vacation snapshots quite as suitable as the venerable postcard for sticking on the refrigerator, pinning to the cubicle wall, or sharing with friends at the weekly coffee and bagel meet-up.

So for my vacation this year I thought I would check the App Store to see if there was a reasonably priced, reasonably capable postcard app among the 75 gajillion digital widgets available, an app that would let me create a digital card with my own photos, compose a short message, and then either send it via email (for my friends who were comfortable citizens of the 21st century) or print and send it via standard postal mail (for those in my cohort who pine for phones with dials and typewriters with ribbons). Not surprisingly, I found several apps that offered these capabilities, but the one that caught my eye and won my heart was an app by some guy named Bill Atkinson: PhotoCard.

You may remember that name. Atkinson was the Apple employee who was the guiding light behind such things as QuickDraw (the graphical software underpinning the original Mac), MacPaint, and HyperCard. What you may not know is that, aside from his software-crafting brilliance, he is also a highly respected nature photographer. He brought his love for fine photography together with his outstanding abilities as a software artisan to create PhotoCard, an app that is finely tuned to do one thing well: produce attractive digital postcards with a minimum of fuss and fiddling. PhotoCard is free; it requires iOS 7.

PhotoCard is not new; it first appeared for the iPhone back in 2010 (TidBITS readers may remember Adam Engst’s close encounter with Bill Atkinson at Macworld in 2010, during which Atkinson waxed passionately about the app, among much else; see “Macworld Expo 2010 Reboots,” 15 February 2010). PhotoCard has evolved since then, becoming more streamlined and capable with each iteration; the current version is 9.0.

The app, which is native for both the iPhone and iPad, presents a simple interface controlled by a small strip running along the bottom of the screen on the iPad; on the iPhone, the app uses landscape orientation and the strip is split in two, presented along the sides of the screen. The commands available on the strip are easy to figure out, but on the off-chance you find them obscure, the Guide (also available from a single tap on the strip) can clarify things.

To create a new card you tap (what else?) New. This provides you with the opportunity to take a new photo with your device’s camera, choose a photo from your Photos collections, use a photo from a card you sent previously (PhotoCard retains a history of all the cards you make and send), or use one of Atkinson’s own nature photos. The app comes with hundreds of such photos that you can use on your postcards for free; if storage space on your device is an issue, you can, instead, download the “lite” version of the app, which
includes only a few dozen photos.

Although I appreciate the capability to take a picture within the app and immediately make a card from it, I found that I never actually used that feature. Instead, I would usually compose and take pictures using my Camera app and later pick a shot from my Photos collection when it came to postcard-writing time.

Once you have a picture selected, you can crop and adjust it in various ways. The controls are simple and not too ambitious: you can enhance the photo (which automatically tweaks the brightness, saturation, and contrast, usually to good effect), lighten it, darken it, and switch between landscape and portrait orientation. However, because you can use any photo in your Photos collection, and because there are many apps that provide more complex and detailed image editing capabilities, PhotoCard’s minimalist editing controls are not much of a drawback. 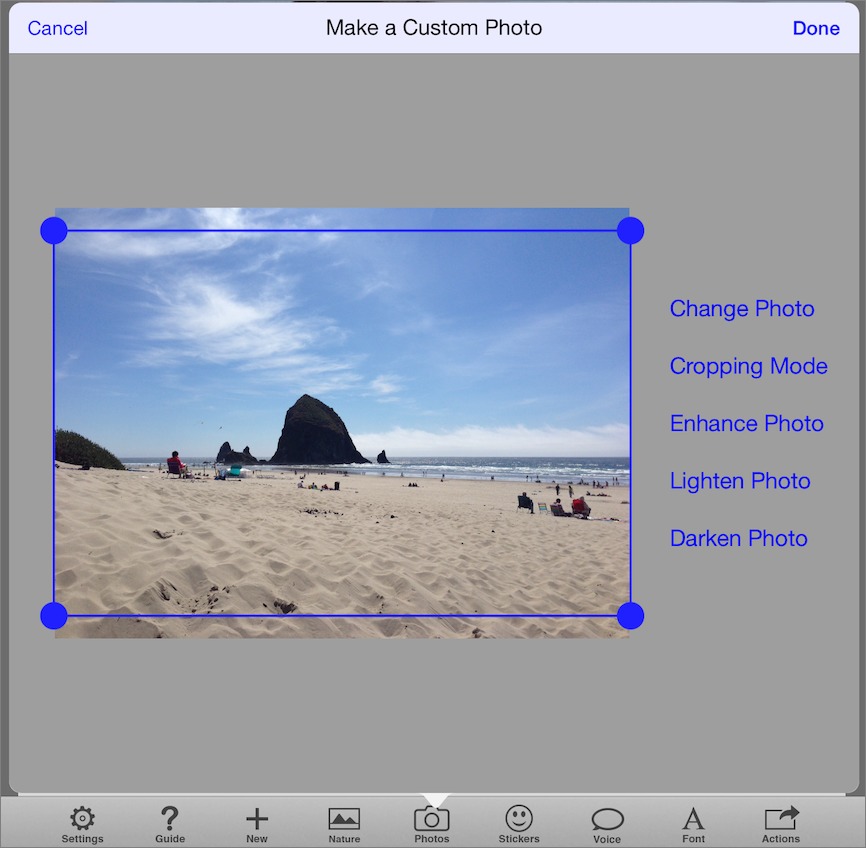 With a photo picked and tweaked, it’s time to compose the message to put on the card. Once again, the function is simple: just tap in the content area of the card and start typing. If you don’t like the typeface, type size, or line spacing, a quick tap on the Font button provides a menu of fonts from which you can choose, along with two simple sliders to adjust size and spacing. Aside from the built-in iOS fonts, the app comes with a bunch of additional licensed typefaces. My only complaint about the text
editing interface is that it does not support styled text, like italic or boldface. I can live with that.

Next, you can pick a stamp to put on the card. Again, PhotoCard comes with a huge selection of stamp designs from which you can choose. However, if none of these appeals to you, you can, for a small fee, create a stamp from one of your own images, which you are then free to use on any cards you subsequently make (more about the fee below). For email cards, the stamps are of course merely decorative items; for cards to be sent via postal mail, the stamps serve as postage, and they display the appropriate postal bar
codes required by the U.S. Postal Service (the care with which Atkinson designed the stamp layout to work within the USPS’s requirements is typical of the app). 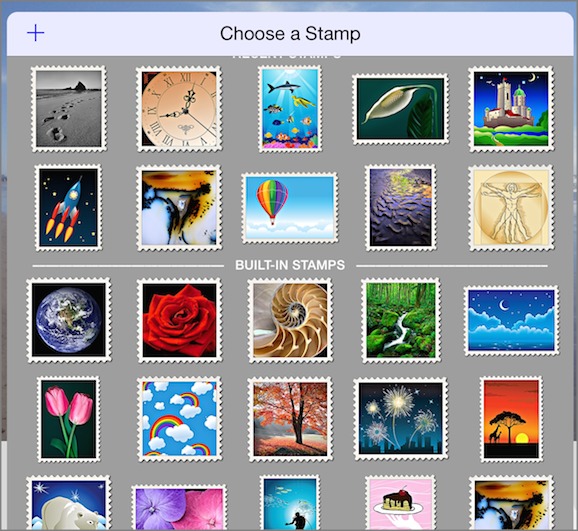 If you like, you can also decorate your cards with stickers; these are graphics that also come with the app and that range in style from whimsical… 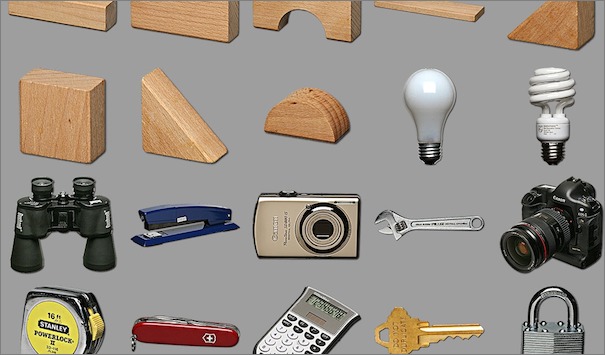 You can resize and rotate the stickers and drag them to where you want them to appear. Don’t worry, PhotoCard won’t let you place a sticker that obstructs the address or the stamp. To remove a sticker, just drag it off the card. As with stamps, you can create your own stickers for a small fee and reuse them as often as you like.

You can also tap Voice to add short voice notes to any emailed card (about a minute’s worth of audio). A voice note is indicated by a speech balloon graphic that, like a sticker, you can position wherever you want on the card. The actual voice note, though, comes through as a separate sound file attached to the email; your recipient can click the attachment to play it in most email programs.

Finally, you can tap Actions to address the card, either manually or by choosing the addressee from your iOS Contacts list. PhotoCard also keeps track of previous addresses you have used so you can send additional cards to the same recipients with minimal fuss. The app knows whether you have chosen an email address or a postal address, and adjusts the card’s stamp appropriately.

With the card suitably addressed, you tap Actions again and then tap Send Postcard. For printed and mailed cards, the fee is deducted from your PhotoCards account, and the card is printed, trimmed, laminated, and mailed within about two business days. It costs nothing to send a card via email. 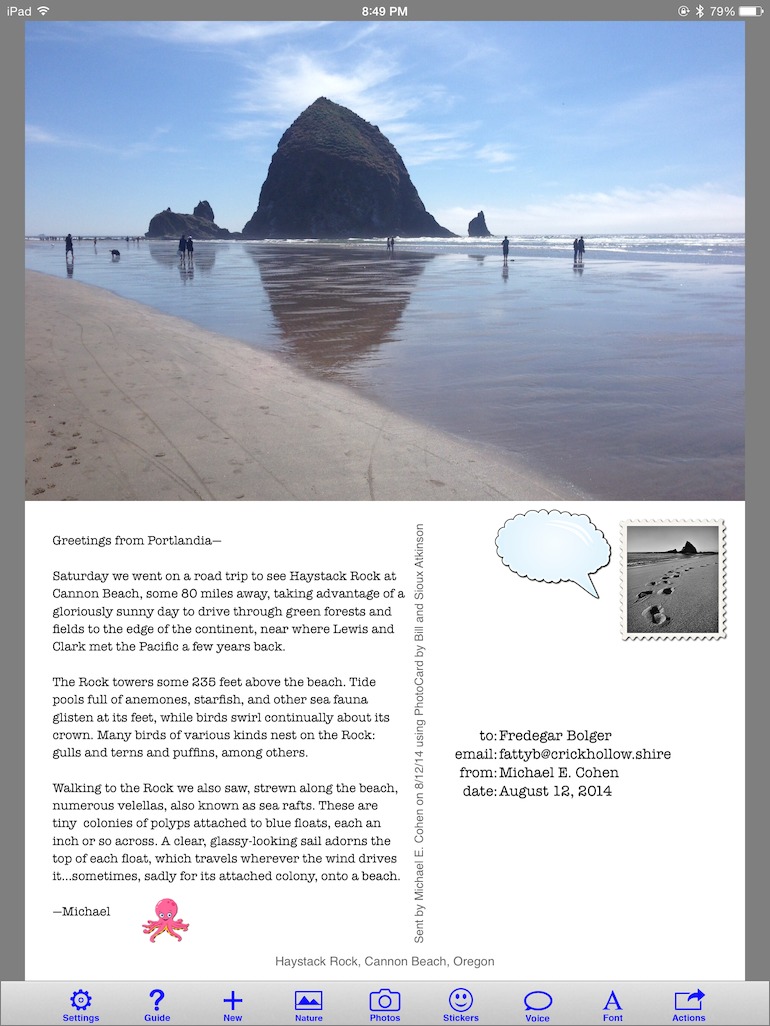 And how do the cards look? The email cards are beautiful; Take Control editor in chief Tonya Engst, who received one of my emailed vacation cards last week, said, “It’s nice enough that I could print it out and stick it on my fridge to enjoy for a while (were my fridge not already encrusted with stuff).” (She sent me a snapshot of her refrigerator to support her case.)

As for the print cards, they are 5.5 by 8.25 inches (14 by 21 cm) in size, and are stunning: the colors are bright, the details are sharp, the print quality is excellent, and the laminated paper stock on which they are printed is sturdy enough to survive all but the most negligent handling by postal employees. For best results when printing, Atkinson recommends that you crop your own images to exactly 1920 by 1280 pixels and save them as 8-bit sRGB JPEGs; the image I used for my sample card I simply grabbed as-is from my Photo Stream, and the printed version came out looking just fine.

Now, about the “account” that I previously mentioned. Rather than your buying stamps, stickers, and printing/mailing charges as in-app purchases, you create an account with PhotoCard when you first use the app. You can then purchase “credits” for your account via PayPal or credit card. Credits cost about $2 each; I say “about” because the more you buy at a time, the less they cost. For example, on my recent vacation I paid $25 for 30 PhotoCard credits. The fee for creating a custom stamp or sticker, or for having a card printed and mailed, is two credits.

The account is useful beyond just providing a way to buy and spend credits. It also keeps a history of all your cards and card recipients and syncs them among all the iOS devices on which you have PhotoCard installed. This means you can send a card from your iPhone, and later pick up your iPad and reuse the previously sent card to send to someone else.

I don’t have much else to add other than that I love, love, love this app. On my most recent vacation I found myself looking for opportunities to take pictures and send them off to friends and family. PhotoCard is simple, slick, and attractive, and I never once found myself frustrated or confused by it. Bill Atkinson has said, “This is my best work, much better than QuickDraw, MacPaint, and HyperCard all rolled together.” Although that may seem a rather hyperbolic statement, given how big a dent in the universe each of those creations made, when it comes to sheer craft, beauty, and elegance, Atkinson may not be wrong.

Comments About FunBITS: PhotoCard Is a Modern Postcard for iPad and iPhone