TidBITS is a small, yet global, operation. Our official base of operations is in Ithaca, New York, but my office is in Tennessee, and most of our editors are in California and Washington State. We also have regular contributors who work from Arizona, Nevada, Minnesota, the UK, and even as far away as New Zealand. On top of that, we have volunteer translation teams in the Netherlands and Japan, and of course readers in innumerable countries. The sun never sets on the TidBITS empire.

For the most part, things run smoothly via email and chat, but I have a lot of time zones to keep track of. It can be a challenge to make sure meetings are penciled in for the correct time, to make sure I’m not expecting an article while the author is asleep, and to know if a last-minute editing question will interrupt someone’s dinner.

It’s tempting to contemplate the Doc Brown route of having an arm full of smartwatches, but then I’d have to remember which watch tracked each particular time zone. My calls for everyone to settle on Greenwich Mean Time have been ignored, and Swatch’s Internet Time never caught on.

Luckily, tools to display the time in other time zones abound. The iOS Clock app can do it, but it’s restricted to major cities. Then there’s the cleverly designed Every Time Zone Web app, but it isn’t configurable and doesn’t scale well on the iPhone.

Oodles of iOS developers have taken a whack at the problem, but most of the apps I’ve found are either poorly designed or out of date. The latest, and most successful, is the new Time Zones app from well-known developer Jared Sinclair. Time Zones is free in the App Store and requires iOS 7.

Sinclair is one of the good guys in independent iOS development, developing high-quality but ill-fated apps. Riposte is the best App.net client out there, and Whisper is a great group-messaging client for App.net; unfortunately, App.net has slipped into a death spiral (see “App.net Sheds Full-Time Employees, Still “Self-Sustaining”,” 7 May 2014). OvershareKit, which Sinclair developed with Justin Williams of Glassboard
fame, is a terrific sharing library for developers that has been made obsolete by iOS 8’s Extensibility features. Unread is one of the slickest RSS readers out there, but Sinclair had to abandon non-essential development on it due to poor sales (despite loads of positive press).

With Time Zones, Sinclair has fallen back on simplicity. It’s a utilitarian app, supported by ads, which you can disable with a $4.99 in-app purchase.

Time Zones shows the day, date, and local time. Below that is a gear button for settings, then a list of tracked time zones, their hour offsets, and the local time in that location. To add a new city, tap the gear button and tap Add a Location. Not every city is available; my home town isn’t, but Ithaca is. However, there’s a workaround I’ll mention shortly. Other options enable you to use 12- or 24-hour time and hide the offsets. 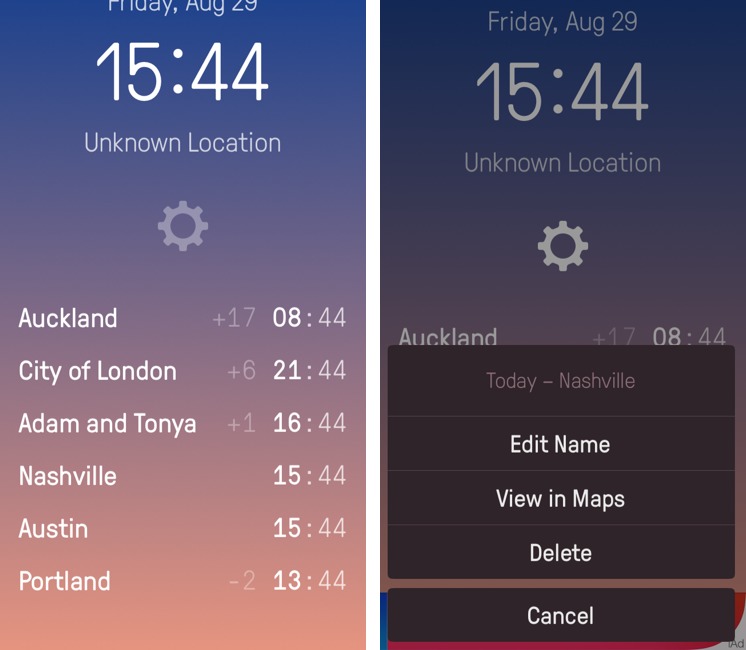 The killer feature of Time Zones is how it lets you rename cities. I added Ithaca to my list of cities, and then renamed it “Adam and Tonya,” since I think about time zones not by where they are, but by who lives in them. So if the person you’re thinking of doesn’t live in an included city, just find any other one in the same time zone and rename it as desired.

To delete a time zone entry, tap it, then tap Delete. From this menu, you can also view the entry’s city on a map, in case you forget where someone is located. 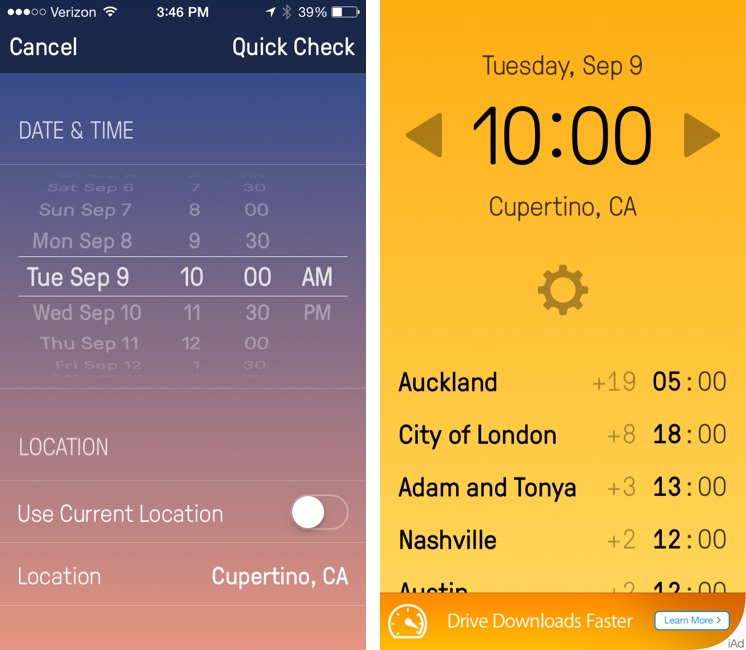 That’s it. Time Zones is simple, pretty, and free. What makes it special is that I can use it to build a dedicated database of the time zones my contacts reside in. If you also deal with people around the world, it’s worth the download, and if you find yourself using it a lot, $4.99 will turn off the ads and thank Jared Sinclair for his efforts.

Comments About Find the Time, Worldwide, with the Time Zones App