My wife’s music collection was stuck inside an old iPod touch. It’s so old that the shiny rear panel had rusted, which I didn’t know was even possible. The problem was that she no longer had access to the computer it had synced with — it’s a long and unhappy story, but there are a variety of other ways I could imagine it happening.

This situation exposed one of the annoyances about iOS: its file system is locked down. You can connect most other devices to a computer, move files back and forth, and be done. But the Apple-approved way of transferring files between iOS and Mac is via an iTunes sync, and iOS wants to sync with only one iTunes library at a time.

Fortunately, I discovered a free and easy way to copy my wife’s music files off the iPod touch: the open-source DeTune from HeadLightSoft. It’s a tiny 2.9 MB download and requires only OS X 10.5 Leopard or later, so just about any Mac user can run it.

DeTune can retrieve more than just music. It can also extract movies, TV shows, ringtones, books, and more, none of which were an issue for my wife’s iPod touch. However, it does not display album art or let you see photos on a device (those can usually be recovered with iPhoto or Image Capture). Nor does DeTune remove any DRM “protection” on media files.

Once you launch DeTune, plug in the device you wish to extract music from and it should appear in the app. If you want to extract all music from the device, that’s easily done. In DeTune’s left-hand sidebar, select Music under your device’s heading, click any song, and then press Command-A to select all songs. Notice the combined size of the files, which is listed at the bottom of the window. 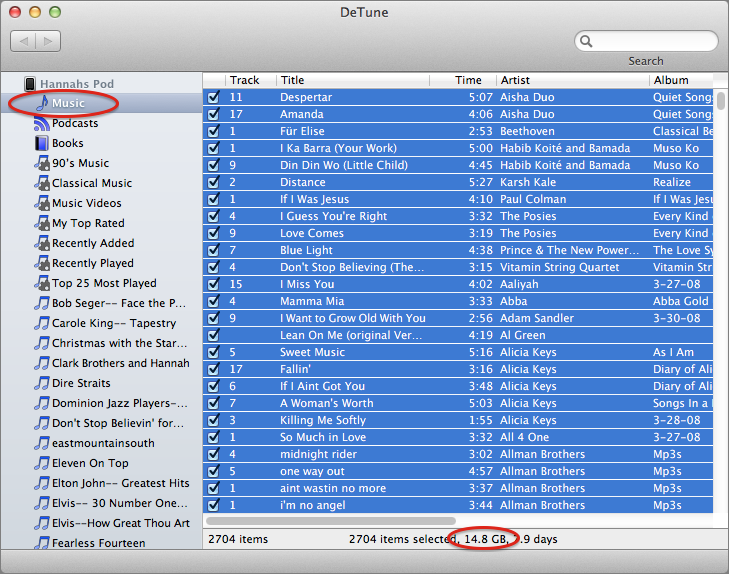 Switch to the Finder, create a new folder to hold your music (making sure you have enough room on that drive!), and drag the songs from DeTune to your new folder. If your collection is as large as my wife’s (14.8 GB), it will take some time for everything to transfer.

You can also view music by playlist if you want to copy only music that’s in a specific playlist, but in this case, I wanted to get everything off the rusting iPod touch so the music could be backed up and loaded on other devices.

The good news is that when the transfer is finished, your music will be sorted into named folders, instead of being dumped into one messy folder. It may not be arranged exactly as you wish, but you can either let iTunes sort things out using the metadata embedded in the music files (for more information, see Kirk McElhearn’s “Take Control of iTunes 11: The FAQ”) or use a file organization tool like Hazel to do the work for you (for more on Hazel, including a 20-percent-off coupon, check out Joe Kissell’s “Take Control of Automating Your Mac”). 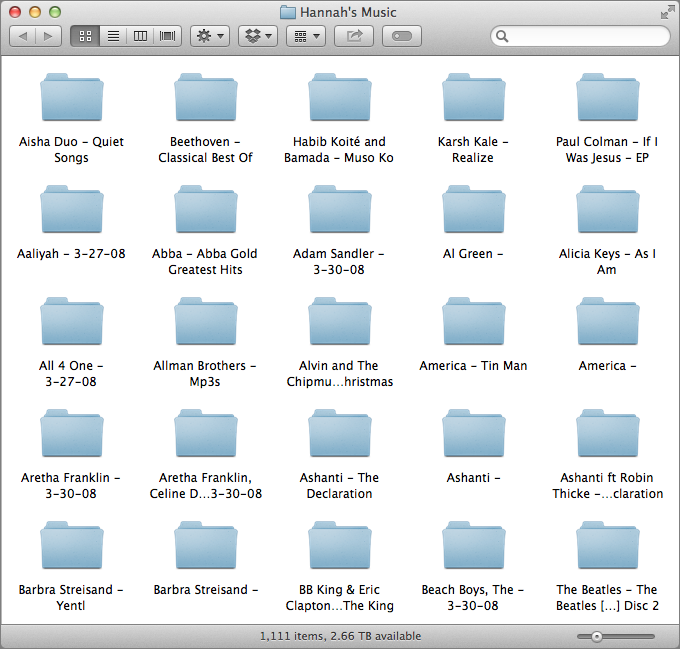 Once I copied the music from the iPod touch to an external hard drive, I simply unmounted the drive, took it over to my wife’s MacBook, copied the music to its internal drive, and added it to her iTunes library. And then basked briefly in my wife’s appreciation of my geek heroism. It’s nice when a seemingly insurmountable problem turns out to have an easy solution.

Thanks to the folks at HeadLightSoft for providing a simple, free tool to recover music from an otherwise inaccessible device.

Comments About DeTune Extracts Your Media from an iPad, iPhone, or iPod touch